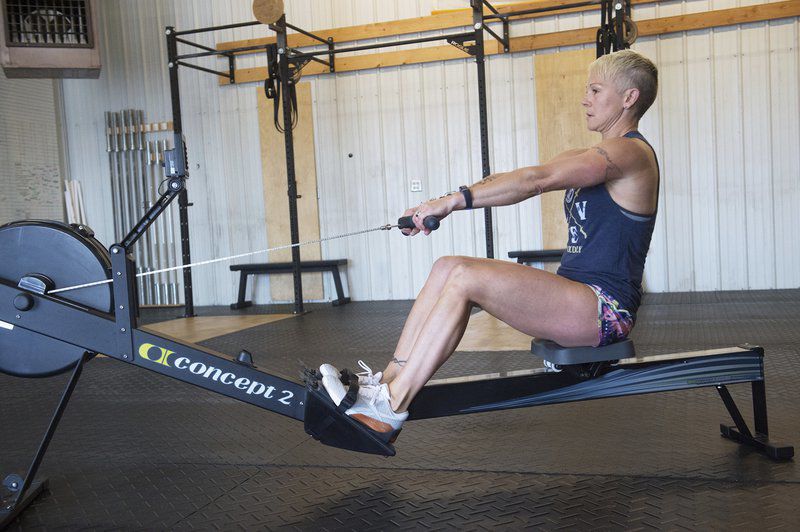 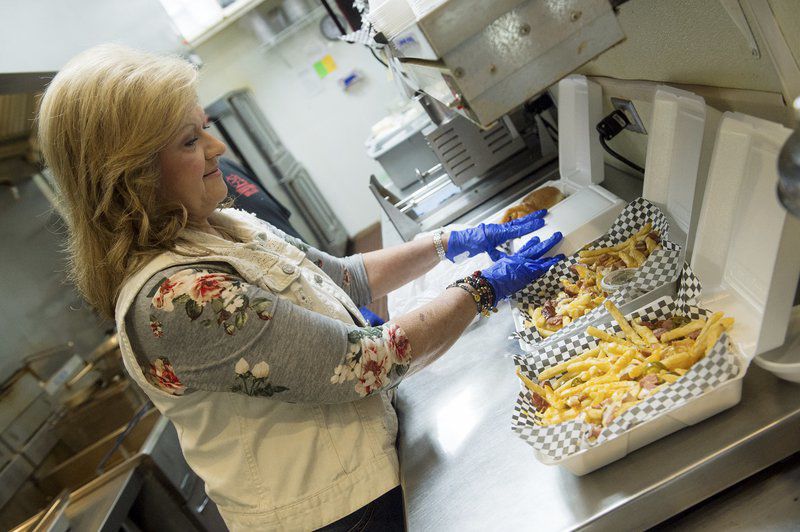 Judy Crockett, owner of Tractors BBQ and Grill, packs up takeout orders at the restaurant on Thursday in Lamar. She too is eager for clearance to more fully open the reastaurant. She also cited frustratIon over by the definitions of "essential" and "nonessential" businesses in the effort to throttle the spread of the coronavirus.GLOBE | ROGER NOMER 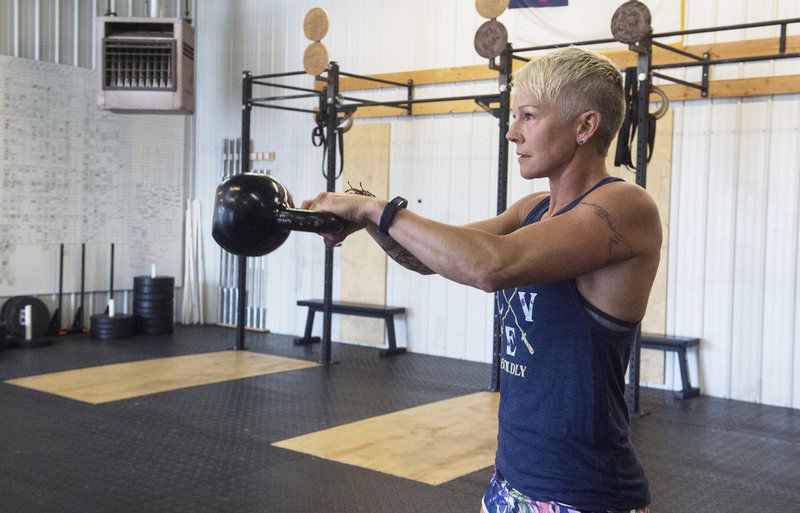 Christy Heins works out at her business, CrossFit Lamar, on Thursday. She is among the town's business owners who are eager for the OK to reopen, especially in a staggered fashion. She also said her business is important to the health of the community, which is in a county that has not recorded one case of COVID-19 disease.GLOBE | ROGER NOMER

Judy Crockett, owner of Tractors BBQ and Grill, packs up takeout orders at the restaurant on Thursday in Lamar. She too is eager for clearance to more fully open the reastaurant. She also cited frustratIon over by the definitions of "essential" and "nonessential" businesses in the effort to throttle the spread of the coronavirus.GLOBE | ROGER NOMER

Christy Heins works out at her business, CrossFit Lamar, on Thursday. She is among the town's business owners who are eager for the OK to reopen, especially in a staggered fashion. She also said her business is important to the health of the community, which is in a county that has not recorded one case of COVID-19 disease.GLOBE | ROGER NOMER

LAMAR, Mo. — To say that Barton County business owners are chomping at the bit to reopen is an understatement.

It might be more accurate to say they've chomped that bit to pieces waiting for the go-ahead.

"I actually didn't think it was going to last this long," Christy Heins, owner of CrossFit Lamar, said this week. "We just want to open up so bad."

Reopening is being debated around the country, by mayors and governors and even the president, being urged on by protesters, and being tried in parts of the country. But in areas such as Barton County, the conversation is different and compounded by the fact that it had not recorded a single case of COVID-19 as of Thursday but has been under the stay-at-home order that has closed some businesses and limited others.

"Now we have gone along, and we haven't had a case, not one ... we've got to get this economy going," said Judy Crockett, owner of Tractor's BBQ and Grill in Lamar. "When you have got a county like ours that hasn't been overwhelmed with this ... then let us go."

It's not that residents think they are immune or that they have escaped the pandemic — Crockett believes some Lamar residents she knows may have in fact had it — but they believe it just makes no sense to keep them closed any longer. They also are frustrated by the definitions of "essential" and "nonessential" and other rules they see as arbitrary.

"I can take a dog to get groomed, but I can't go get a haircut," said Heins.

Heins has been closed since March 20 but argues that her services are critical. Exercise, she notes, stimulates the immune system and is good for both physical and mental health.

"I know I am an important business," she added.

She has 50 of what she calls her "athletes" and also offers programs and classes for children. Although closed, she lends equipment to her athletes and offers Zoom classes and training, but since closing her doors last month, revenue has fallen between 30 and 60%. Yet she notes that she still has to pay the same rent, insurance and many other bills.

A few blocks away, at Tractor's BBQ, Crockett is in a similar crunch.

"My utilities are still the same whether I have one person in the building or am at full capacity. ... My rent, my insurance, all of that has stayed the same."

On her slow days, business is one-fifth what it was, even on her best days now, it is only half.

Overall, she estimates she is down about 60%. She does not do delivery but offers pickup and curbside service and has tried to keep some of her employees on the payroll, having them paint the restaurant and install a new ceiling while the building is closed.

Miguel Ramirez, owner of Red Barn Restaurant in Mount Vernon, is another who shares their frustration. Like Barton County, Lawrence County had not recorded any cases as of Thursday.

Ramirez offers drive-thru six days a week, but business is down 80% and he estimated he might survive another month, at most.

"Things are not looking good so far, but we are managing," he said of the business that includes him, his wife and one employee who started two weeks before the pandemic hit.

'An air of caution'

Earlier this week, the Lawrence County Commission, in conjunction with the Lawrence County Health Department, determined that nonessential businesses may reopen but with some restrictions, such as only allowing a "small number" of customers in the business at any one time. No more than 10 people — including employees — can occupy a "single space."

The county also adopted a formula for occupancy, based on the size of the building, and also said churches could reopen but also with restrictions.

"As a community," she said, "there was a disconnect. We never had any cases here."

She added: "We do step into this with an air of caution."

Restaurants in Lawrence County can only be open for delivery, drive-thru and carryout orders, but Rodriguez thinks he should be allowed to reopen with dine-in service. He wonders why people aren't allowed to eat inside but can still go shopping at stores, for example.

"Have you seen Walmart?" he asked. "They are always buying. ... I don't see why not with the dining. I think we should start opening soon."

Back in Lamar, both Heins and Crockett believe they could reopen and stay open in a way that would protect their customers.

Heins has implemented new cleaning practices and placed restrictions on sharing equipment. She also said she has a large enough area to space out her athletes.

"I can fully control who enters and exits my business full time," she added. "I feel like we should definitely be able to open up. We are ready to go. All of our athletes are ready to go."

While she waits, she has applied for a loan from the Small Business Administration but said she was turned down. Asked if she would appeal, she said, "I'm working very hard to try and keep my business afloat, and I just don't have time to mess with it."

"We are keeping our head up and trying our hardest," she said, and then added of the coronavirus: "It's one of the things we are going to have to learn to live with."

Joel Dermott agrees. He is another who favors allowing businesses in Barton County to reopen, saying he is ready for the "county to be turned back on."

Dermott is administrator of the Barton County Health Department, and as of Thursday, his department reported 39 tests have been administered in the county, 36 were negative and three were pending.

Asked if the county just had a low occurrence of COVID-19 or just a low rate of testing, he said the county has tested proportionally at the same rate as other counties but noted there are only 11,000 residents in the county of 600 square miles.

"Social distancing is a way of life," he said.

Although a rural county, he said he and most residents believe COVID-19 has been and is present in the county, perhaps at a lower level or with a milder strain, but that local businesses would take responsible precautions to minimize its spread as they reopen.

"The key to it is going to be that we have to be aware of our circumstances ... Even though we feel it is not a problem in this county, things could change. If we have something like that (an outbreak) occur, we may have to take measures to counteract that."

But he advocated for a measured response, targeting the "hot spot," rather than closing all businesses.

"No one out here wants anyone to get sick," he added. "I have a lot of faith in these businesses. I trust these people."

Dermott also said stay-at-home orders were put in place to give the health care system time to prepare so it wouldn't be overwhelmed as happened in Italy.

"We bought ourselves time," Dermott said, starting with travel bans.

"We're more prepared," he said, adding that opening businesses doesn't mean opening them all at the same time and in the same way.

Nursing homes, for example, should continue to enforce restrictions to protect at-risk populations even as other businesses begin to return to normal.

He also said it is important to remember that there are health costs in a community when the economy collapses, including more stress, increased drug and alcohol abuse, and more mental health crises.

And not only have stay-at-home orders given the health care infrastructure time to adjust, they also have allowed businesses to develop ways to serve customers safely.

"They will adjust," he said of the businesses. "We have to allow them to adjust. That's the very nature of businesses. That's what they do every day."

At Tractor's BBQ, Crockett said closing businesses for a time was the "smart thing to do," but she believes the time has come to reopen. She also said there are a number of steps she can take when they are allowed to reopen, including reducing the number of tables, to minimize problems.

"Half capacity is better than no capacity," she added.

She has looked at SBA options and the Paycheck Protection Program but said the best option is to open up. She used to serve breakfast and wants to get back to two meals per day.

Asked how quickly she could reopen when she gets the all-clear, she added: "I could be ready at 5 p.m. tonight."