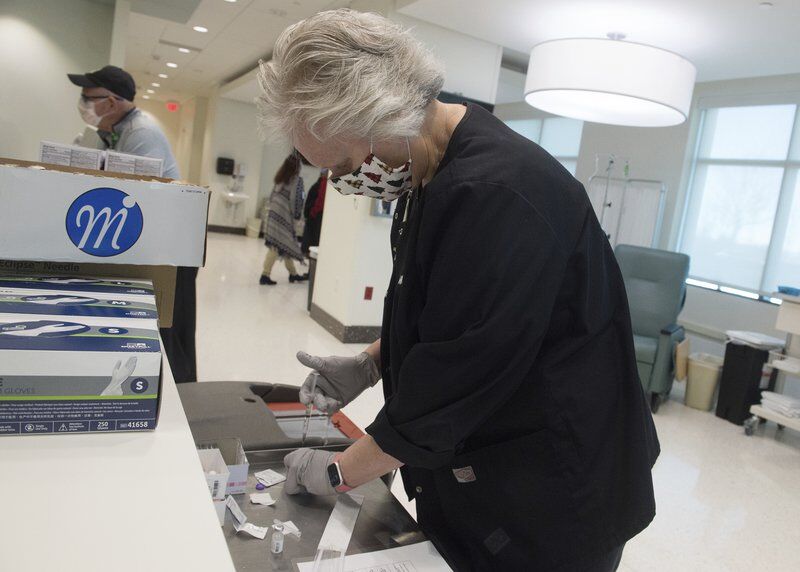 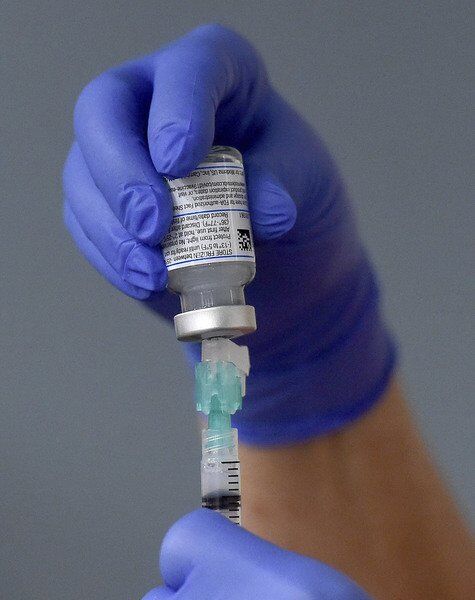 A nurse prepares a syringe with a dose of the Moderna Covid-19 vaccine on Tuesday at Freeman West. About 300 doses were administered to frontline workers at Freeman on Tuesday. Globe | Laurie Sisk 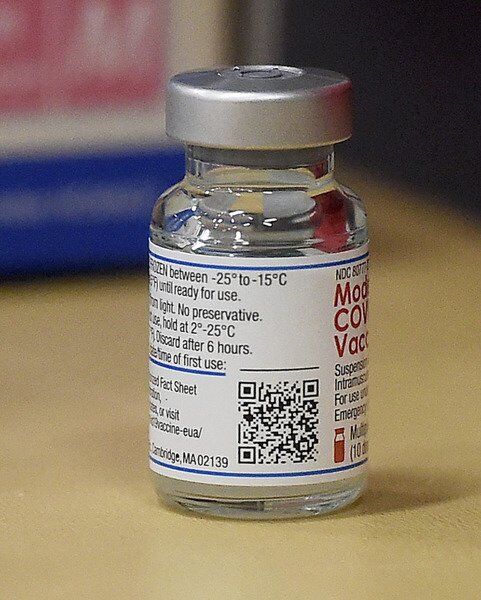 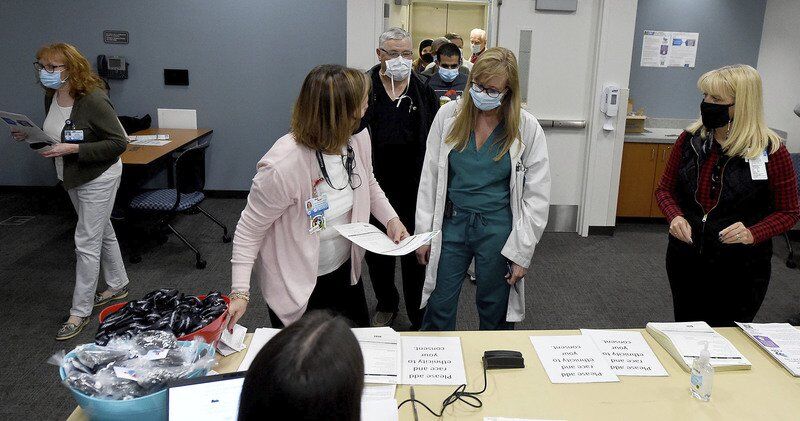 A nurse prepares a syringe with a dose of the Moderna Covid-19 vaccine on Tuesday at Freeman West. About 300 doses were administered to frontline workers at Freeman on Tuesday. Globe | Laurie Sisk

When COVID-19 vaccines become available to the general public early next year, Cindy Sapp Myers said she plans to be one of the first Joplin-area residents to get in line.

“I’m very hopeful and excited the vaccines getting closer to being a reality,” she said.

A Joplin school teacher, she suffers from rheumatoid arthritis, an autoimmune disease that places her at higher risk for COVID-19.

“I realize it’s not a 100%, but it offers a really decent amount of immunity to COVID and should bring some normalcy in life back.”

Since March, she said, “I haven’t been able to see elderly family members, spend time with friends or attend gatherings. I miss traditions like Christmas parties and holiday events. I am also teaching virtual to be safer, but I really miss my students.”

Both the Pfizer-BioNTech and Moderna vaccines have arrived in the area, the former going to Mercy Hospital Joplin and the latter to Freeman Health System. Early results show both vaccines appear safe, although Moderna’s shots are easier to handle because they don't need to be stored at the same ultra-cold temperatures as the Pfizer vaccine.

“Vaccinations are the No. 1 most important invention that medicine has ever brought to us, when you think about how many of us no longer suffer from smallpox or polio or measles or even chickenpox,” said Dr. Rob McNab, director of Freeman’s COVID-19 unit. He was one of the Freeman health care workers who got a vaccine last week.

Vaccinations, he said, “are one of the strongest tools that we have to maintain the health of our community.”

Phase 1A is underway, with health care workers and long-term care residents and staff who are at high risk getting first crack at the vaccines.

“We will continue working to vaccinate Phase 1A priority groups throughout the coming weeks, and we are working closely and collaboratively with these groups to ensure a smooth process,” said Lisa Cox, spokesperson for the Missouri Department of Health and Senior Services.

More than 100,000 of the more than 330,000 deaths nationwide have been nursing home residents or staff and employees. Locally, many nursing homes have been hard hit, including Grove Nursing Center in Grove, Oklahoma, and Spring River Christian Village in Joplin, each having reported more than 20 deaths as a result of COVID-19.

“Nursing home residents should be able to get it very soon,” said Dr. Erik Martin, a Joplin doctor who traveled to New York City this spring to assist in the pandemic response there. “This group has suffered so much during the pandemic, both from the disease itself and from the isolation of social distancing. The vaccine, I hope, will finally bring an end to their long suffering.”

Phase 1B will move to other high-risk people, ages 18-64; people older than 65; and first responders and others defined as essential workers, including school teachers, child care workers, farmers, energy workers and others.

“Missouri received federal guidance regarding Phase 1B and beyond over the weekend and is working to finalize the state’s priority groups currently,” Cox said. “When we get closer to vaccinating Phase 1B groups (in February), we will be able to share more information as to how this process will work for them.”

Phase 2 vaccinates individuals in other high-risk populations, such as the homeless and prison inmates. Those vaccinations are expected to be wrapped up by the end of April.

Missouri officials did not have an estimate for the number of people in each phase.

Under Phase 3, all Missouri residents would be eligible for the vaccine. Some time during the spring of 2021 is the best estimate for when the general populace would have access to the vaccines, “but it’s all dependent on supply, which is out of our control,” Cox said.

“We are also working to build out a dashboard to show vaccination progress in Missouri, and that will soon be available on our website at www.MOStopsCovid.com,” she said.

Dr. Anthony Fauci, the nation's top infectious diseases expert, said last week he expects vaccinations for the general population to start “somewhere in the end of March (or) the beginning of April.” He said the process could take up to four months to reach all Americans who want to receive the vaccine.

The Joplin Health Department will provide COVID-19 vaccinations at some point, with vaccinations taking place in local hospitals and health care clinic locations. Details on who will be eligible for those vaccinations will be announced at a later date.

Just as COVID-19 testing began in late spring as a seven-day process but morphed into drive-by swabbing taking no more than a minute, “as more vaccines become available, I think we’ll probably be seeing, potentially, drive-thru (lines) for vaccinations,” said Donna Stokes, Mercy’s infection preventionist. “There will be logistics to that, of course, but I look forward to extend that opportunity to the community."

It’s too soon to tell whether enough Americans will receive vaccinations to eventually reach herd immunity, which Johns Hopkins Bloomberg School of Public Health defines as roughly 80% of the population being protected against the disease.

“The vaccines are very safe,” said Martin. “They have been rigorously tested on tens of thousands of study participants. Side effects generally have been mild and similar to other vaccines. The (Centers for Disease Control and Prevention), the hospitals and clinics administering the vaccines as well as the manufacturers will all continue to monitor for any adverse effects should they happen, just as they do for existing vaccines.”

Fauci, along with Vice President Mike Pence, were among many high-profile Americans who received their COVID-19 vaccinations on live television last week in an effort to help boost the public’s confidence behind the vaccinations.

William “Bill” Boles — an emergency room paramedic and one of the first Mercy Hospital Joplin employees to receive a COVID-19 vaccination — described the disease as both “evil” and a “nightmare.” Another Mercy surgeon called the virus a “scourge.”

Freeman cardiologist John Cox said last week of the shots: “I’ll take a sore arm over COVID any day of the week.”

“While there’s still a little bit that’s still unknown about the vaccine, I think there is enough known to know that it is safe,” added Dr. David Baker, a trauma surgeon who became the first Freeman Health System employee to receive the Moderna vaccine on Tuesday.

Despite potential side effects or allergic reactions from either vaccine, the benefits “are very much worth going through it to help create immunity as a group. What we know so far is that the reactions ... are very treatable or very manageable, so I think it’s well worth it,” Baker added. “There was no doubt that I wanted to have this done.”

Death and sickness wrought by COVID-19 over the past 11 months “has proven far worse than what the vaccine might do," said Dr. Eden Esguerra, an infectious disease specialist and first Mercy Hospital Joplin employee to receive the Pfizer vaccine.

Experts are hoping the two vaccines working in tandem will defeat the pandemic but also are are urging Americans to continue wearing masks and practicing social distancing and proper hygiene to reduce the spread.

“People should continue masking and social distancing until they have been vaccinated,” Martin said. “Although there is some immunity after the first dose, the vaccines aren’t fully effective until the second dose has been given.”

“So about a week after the second dose is probably enough time to be considered safe, and at that time, I think people can relax masking and social distancing, at least in their private lives. Hopefully within the next few months, if enough people get vaccinated and case numbers begin to go down, we can then begin to relax social distancing measures in the public sphere as well,” Martin added.

Added Cox: “Had we all masked up and kept away from each other, we wouldn’t be in this place right now. The vaccine is a game-changing thing, but again, it’s like masks: You have to have compliance; you have to have enough of the population immune for the viral levels to drop.”

Only by doing that, he continued, “can we go back to our normal lives, attend restaurants and baseball stadiums and all the things that we want to do.”

Which is exactly what Joplin resident Allen Shirley wants to see happen in 2021.

“It’s time to get out of this humdrum that we’re in,” the Joplin resident said. “I think a lot of people, with the vaccines coming out now, are feeling like we’ve come through this terrible tunnel and that we’re finally coming out on the other side. We can finally get on with our lives."

More about the COVID-19 vaccines

Both Moderna’s and Pfizer-BioNTech’s shots are mRNA vaccines, made with a groundbreaking technology. They don’t contain any coronavirus, meaning they cannot cause infection. Instead, they use a piece of genetic code that trains the immune system to recognize the spike protein on the surface of the virus, ready to attack when the real thing arrives.

Their development less than a year after the novel coronavirus first emerged set a record. The previous fastest vaccine — to combat the mumps — took four years to develop. Under normal circumstances, making an effective vaccine can take between 10 to 15 years

“I think it’s testimony to modern science and what we (as humans) are capable of doing,” said Dr. David Baker, a trauma surgeon who became the first Freeman Health System employee to receive the Moderna vaccine on Tuesday. “It makes me proud to be a part of this.”