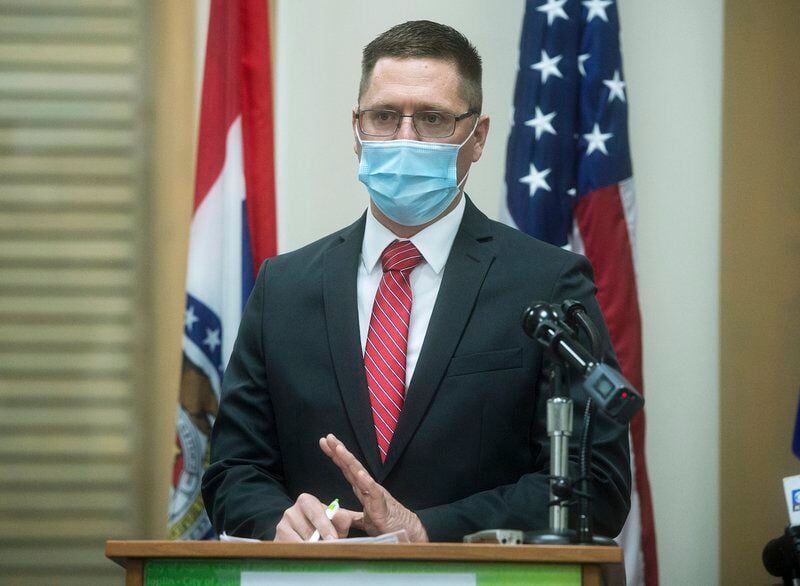 Ryan Talken, director of the Joplin Health Department, talks about COVID-19 trends in the city during a news conference Monday at Joplin City Hall. Joplin’s positive rate — the percentage of people being tested positive for COVID-19 — is at 7%, which is close to state’s 6.7% average, he said. GLOBE | ROGER NOMER 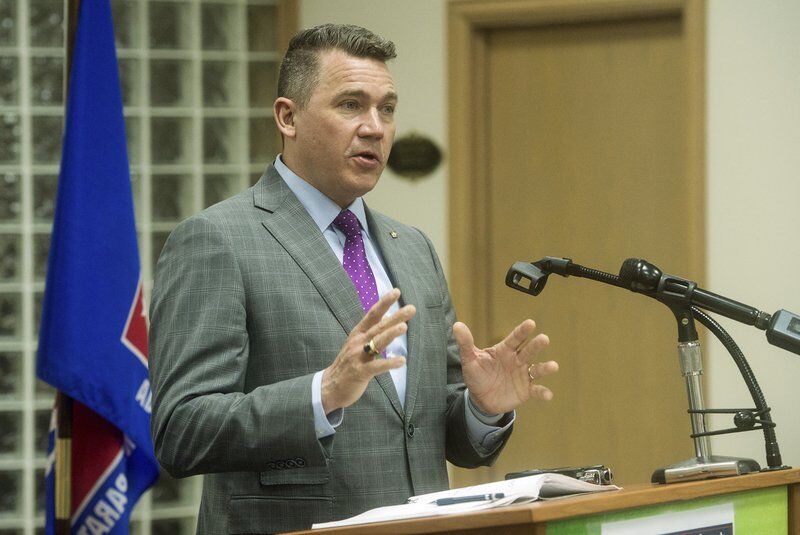 Joplin Mayor Ryan Stanley talks about the downward trend in COVID-19 infections in the city during a news conference City Hall. He also was among those cautioning residents to continue taking proper precautions against spreading the disease. GLOBE | ROGER NOMER

Ryan Talken, director of the Joplin Health Department, talks about COVID-19 trends in the city during a news conference Monday at Joplin City Hall. Joplin’s positive rate — the percentage of people being tested positive for COVID-19 — is at 7%, which is close to state’s 6.7% average, he said. GLOBE | ROGER NOMER

Joplin Mayor Ryan Stanley talks about the downward trend in COVID-19 infections in the city during a news conference City Hall. He also was among those cautioning residents to continue taking proper precautions against spreading the disease. GLOBE | ROGER NOMER

The United States has reached a grim milestone with multiple sources recently reporting COVID-19-related deaths in the neighborhood of half of a million in less than a year’s time.

To put that number in perspective on a regional level, that’s the equivalent of losing the entire population of Jasper, Newton, Barry, Barton, Lawrence, McDonald, Vernon, Dade, Cedar, Bates and Henry counties in Missouri, along with Cherokee and Crawford counties in Kansas and Ottawa and Delaware counties in Oklahoma: a total of 500,557 men, women and children.

She said Monday that she’s struggled to properly come to terms with that six-digit number.

While saddened by the numbers and wishing they would end immediately, Rob McNab, director of Freeman Health System’s COVID-19 unit, said he wasn’t surprised by the counts.

“Unfortunately I think we’ve known what the death rate would be (from the very beginning) — somewhere in the high 1.7% to 2% rate," he said Monday. "It really boils down to math. The more people that you let get infected, that rate is what happens. It’s (simply) a reflection of the severity of how much we’ve spread the infection.

In late March, Dr. Anthony Fauci, the country’s top expert on infectious diseases, estimated that between 100,000 and 240,000 Americans could die of the pandemic. At the time, there had been 2,200 deaths nationwide. By October, with 200,000 Americans already dead after a summer of back-to-back spikes, the projected death total had reached 400,000.

A single death is a horrible tragedy, said Ryan Talken, Joplin’s health department director, but a half-million deaths “is a number that would shock anyone. Everybody had hoped that number would be lower.

“If you had asked me last March if, a year from now, we’d be standing here and still the main story was COVID-related, I would not have (believed) it. I would have thought we’d be past that.”

During Monday’s media briefing at Joplin City Hall, Talken said Joplin’s COVID-19 numbers were “looking a lot better” than a month ago. There were 40 active cases of the virus reported among Joplin residents. Local hospitals had 33 virus patients admitted, with six of those from Joplin. The seven-day average of cases is at seven per day, a 24% drop from last week’s numbers, and that trend “is continuing in a downward motion.”

Joplin’s positive rate — the percentage of people being tested positive for COVID-19, was at 7%, which is right around the state’s 6.7% average, he said.

“Our numbers are trending down, and it’s up to everybody to make that continue to happen,” Talken said. “We’re not out of the woods yet, but we’re seeing the light.”

Americans are now halfway to “getting back to living our lives that we traditionally expect to,” McNab said.

“I think we’ve made the railroad tracks," he said. "And I think we have a train on the track. But I think the train now needs to make it into the station." By encouraging Americans to get their vaccinations, “we now have the tools that we need … to get the 70% of the population to be immune to this disease, one way or the other."

Herd immunity, he continued, comes in two ways: "You either get enough people vaccinated or enough people have got to be immune because they've seen and survived the virus. And if you do it the (latter) way, that comes at a toll of about 6 1/2 million people who will have to lose their lives for us to get herd immunity without the vaccinations. So it's super critical that state and federal government keeps that (vaccination) supply coming."

While vaccinations continue to roll out locally — as of Monday, roughly 11% of Jasper County’s population had received at least one dose — it’s equally important for people to continue to mask and observe social distancing.

“There is a light at the end of the tunnel,” Esguerra said. The situation is "much better than where we were during (November’s) peak, but we can’t let our guard down."

“I’m still very much on guard when I think of what this virus can do,” she said. “I’ve seen it; it still scares me to death.”

Several sources have different COVID-19 death totals due to the ways they gather the information. For example, the New York Times/Wikipedia tally has the U.S. toll at 499,000. The Centers for Disease Control and Prevention's Data Tracker is reporting 497,415 cases. Most of the major news outlets — NBC, CBS, NPR and the Guardian — have reported the toll exceeding 500,000. The Globe has been using the tally reported by Worldometer. It reported the 500,000 mark being eclipsed last week. It describes itself as being run by an international team of developers, researchers and volunteers with the goal of making world statistics available in a thought-provoking and time relevant format around the world. It is published by a small and independent digital media company based in the United States.