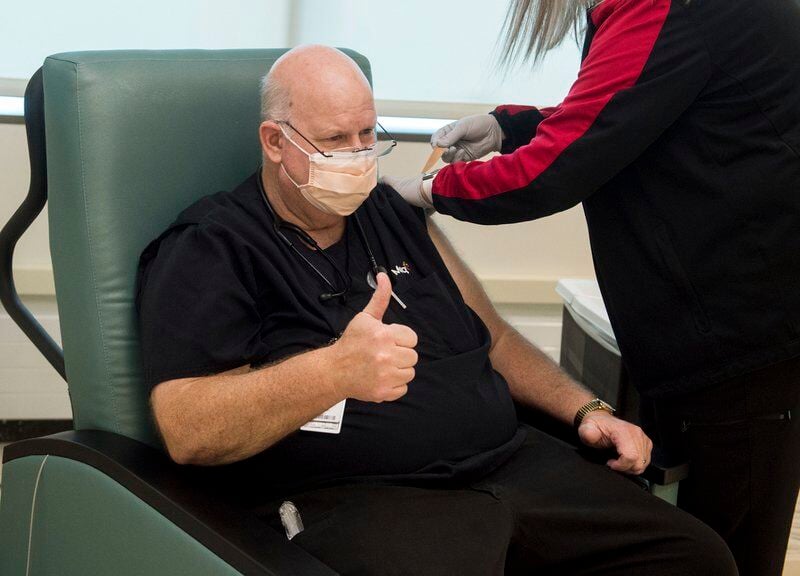 William Boles, paramedic in the emergency room of Mercy Hospital, signals his appreciation in receiving the COVID-19 vaccine Thursday morning at hospital. He said he has seen the devastation the coronavirus has wreaked on families. "It’s pure evil," he said. But he said the vaccine "will allow us to get ahead of this pandemic and … put it behind us.” GLOBE | ROGER NOMER 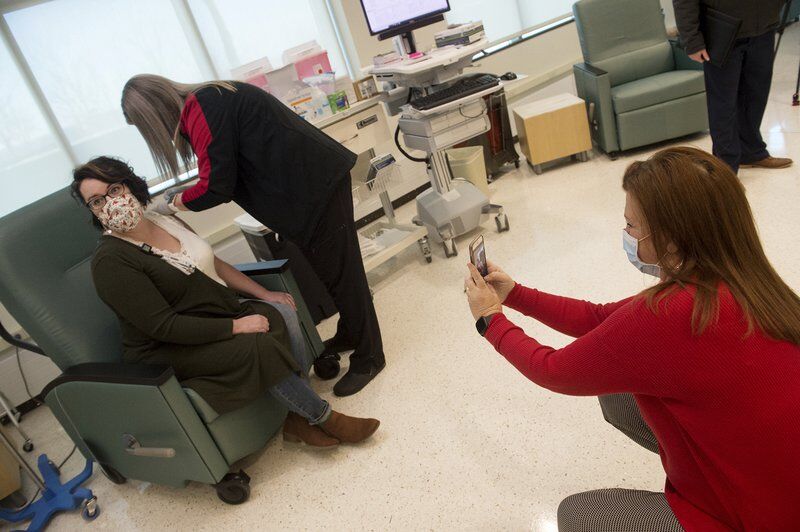 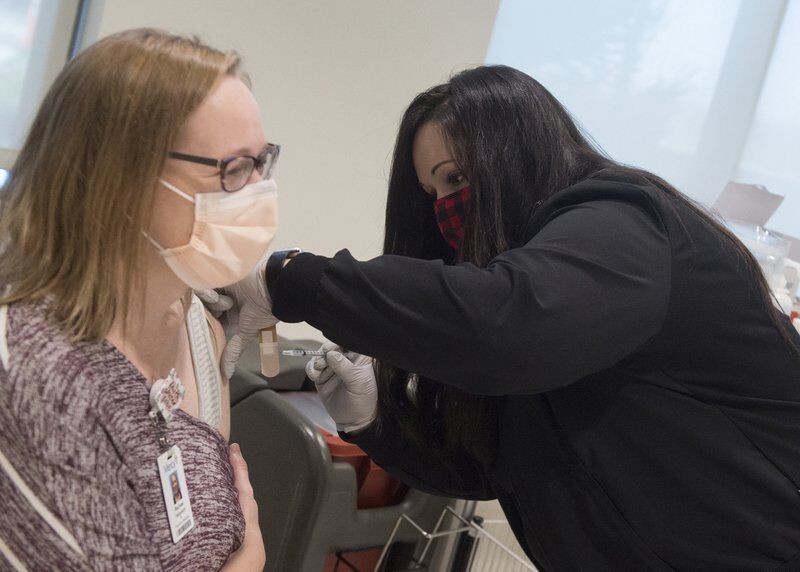 William Boles, paramedic in the emergency room of Mercy Hospital, signals his appreciation in receiving the COVID-19 vaccine Thursday morning at hospital. He said he has seen the devastation the coronavirus has wreaked on families. "It’s pure evil," he said. But he said the vaccine "will allow us to get ahead of this pandemic and … put it behind us.” GLOBE | ROGER NOMER

“I didn’t even feel it,” he said a few minutes later. “I’m always glad to get a vaccine. If it can help keep this COVID virus from spreading, I’m all for it. It’s the best of the best for everyone.”

Describing COVID-19 as a “nightmare,” he said he'd seen the darkest aspects of the virus time and time again in his role as a full-time ER paramedic based at the hospital.

“Mercy gives us the tools to do the job, and we’ve been able to do just that,” he said. “We’ve been bogged down and full a few times, and that’s always been the challenge. I’ve seen many lives and many families that have been turned upside down because of this pandemic. It’s pure evil. But I think this (vaccine) is a great thing for us — for everyone. It will allow us to get ahead of this pandemic and … put it behind us.”

Boles, who will be back in the same room for his booster shot in January, was one of more than 100 Mercy Hospital Joplin employees who received the first of two vaccine doses during the day. One by one, doctors and nurses got their shots that at most took roughly 20 minutes to complete.

“If you could see our faces beneath our masks, we are absolutely smiling,” she said. “This is the first opportunity we’ve had to be able to feel that sentiment. It’s been a long nine or 10 months.”

She likened their fight against the pandemic, which has killed 231 people in Jasper and Newton counties, as an emotional roller coaster — one with way more downs than ups.

Both her co-workers and other health care officials throughout the Joplin area “have done great work — done absolutely the best of their abilities — but sometimes that wasn’t enough. And that’s very difficult for our health care workers who put their hearts and souls into their daily work.”

What was happening at Mercy and at other area hospitals this week “gives us a glimmer of hope that we’ll soon be able to get back to some sense of normalcy.”

Jeremy Drinkwitz, Mercy Hospital Joplin’s president, described Thursday as an “absolute historical day of hope,” saying he could feel the energy and excitement throughout the hospital, which has more than 260 rooms.

As of Thursday morning, 150-plus Mercy employees had received the Pfizer vaccine, which arrived at the hospital at 10 a.m. Tuesday. The first employee to receive the sting of the needle Tuesday afternoon was 65-year-old Dr. Eden Esguerra, an infectious disease specialist.

In total, 1,950 double vaccine doses — an initial shot and a booster shot — were received, capable of vaccinating 975 Mercy employees. Hospital staff have been categorized into four categories: A, B, C and D. Those in the A group are considered at most risk to COVID-19 exposure, Drinkwitz said — primarily the nurses, physicians and other caregivers working in the ER.

One of the main reasons why the Joplin hospital was able to get the vaccines so quickly was that Mercy has an ultracold freezer on-site, capable of safely storing the doses, which require low temperatures to survive, Stokes said.

According to Sarah Boyd, Mercy’s director of pharmacy, the Pfizer vaccine arrived at the hospital on dry ice, and when stored inside the freezer, it has a shelf life of roughly six months. But due to Mercy’s vaccine distribution plan for its workers that took “weeks of planning,” officials hope to administer all first doses within a couple of weeks.

“It’s very refreshing to see the amount of hope” that Mercy employees were displaying Thursday, she said.

With his back against a wall, a member of category A, Dr. Duane E. Myers, had just received the vaccine. He had to wait 15 minutes after the shot before he was allowed to leave the room.

“I’ve been waiting for this day,” he said. “When I heard they were giving (the shots) out … I couldn’t wait to come down here and get the process started.”

While admitting he wouldn’t feel completely protected until after he received the second booster shot a few weeks from now, “I still feel better — now that I’m on my way to getting that protection,” Myers said.

Sharon Jones, an infectious disease nurse, was administering the vaccine shots Thursday morning. During that time, she hadn’t heard a single “ouch” or yelp from her subjects.

“But I’ve had a few (co-workers) cry from excitement from receiving the shot,” she said. To many, she added, the needle pokes represented a much-needed psychological lift.

"Here at Freeman Health System, we are excited that the vaccine should be coming soon, and we anticipate delivery in the next week or so," Freeman hospital officials said in a statement Thursday. "However, with the recent announcement by the governor’s office and Missouri Department of Health and Senior Services that the next shipment could contain 25%-30% fewer doses, we know any arrival date is an estimate.

"We are establishing a distribution plan prioritizing those front-line workers who have face-to-face contact with patients."