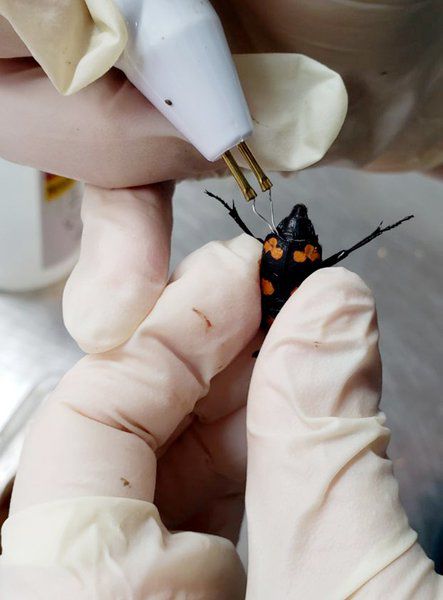 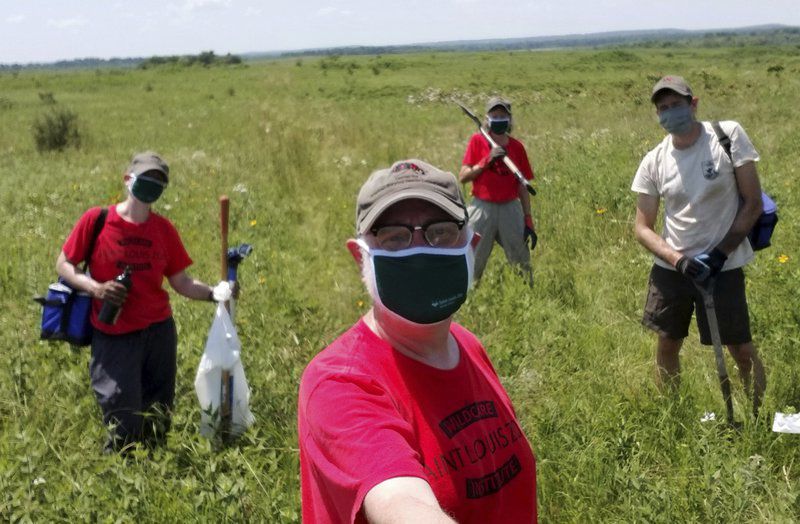 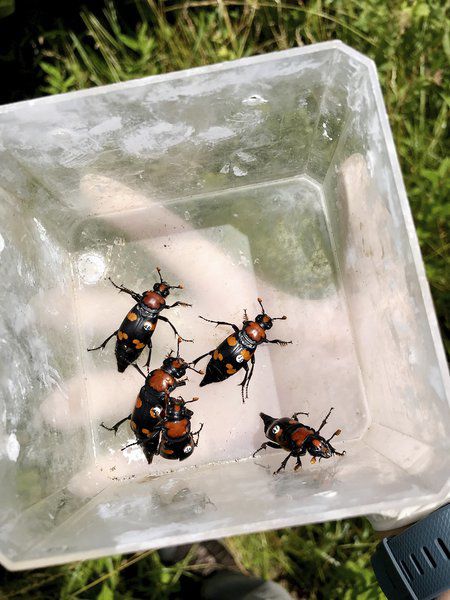 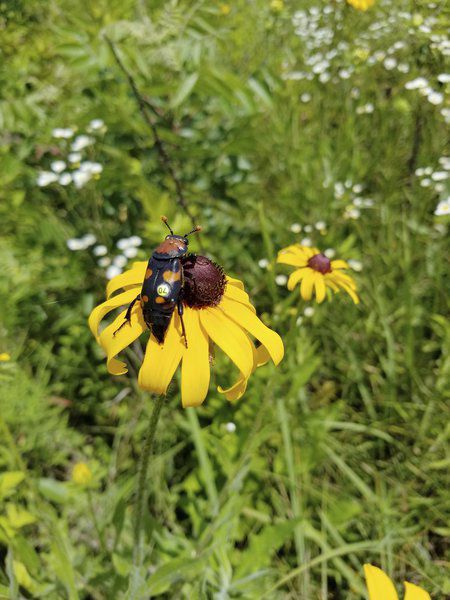 American burying beetles were once found throughout much of the eastern and central United States, but their range has shrunk dramatically. Courtesy | St. Louis Zoo

Scientists leading the first reintroduction of an endangered species to Missouri say the work is continuing despite limitations imposed by COVID-19.

The nearly decadelong effort to restore the American burying beetle to part of its former range continued earlier this month when more of the red-and-orange insects were released in Southwest Missouri, at the Taberville Prairie Conservation Area.

The 1,680-acre remnant of original tallgrass prairie is about halfway between Joplin and Kansas City, and it is the second site in the state where beetles bred in captivity have been released.

"We put out 77 yesterday," said Bob Merz on June 16, referring to 38 pairs and one beetle whose partner died en route to the prairie. Merz said he was optimistic that even that solitary insect would find a mate this summer.

Merz is now the assistant director of the St. Louis Zoo's WildCare Institute, the conservation arm of the zoo that oversees numerous projects around the world, including those involving African painted dogs in Botswana, rare birds in the Galapagos Islands, and burying beetles and hellbenders in Missouri. Merz also is the former zoological manager for invertebrates at the zoo and director of the Center for Conservation of the American Burying Beetle.

The zoo, the U.S. Fish and Wildlife Service, the Missouri Department of Conservation, and the Nature Conservancy have all worked together to restore burying beetles at sites in Southwest Missouri. Merz was joined by others, including Scott Hamilton, a biologist with the U.S. Fish and Wildlife Service and species lead for the American burying beetle recovery effort in Missouri.

This year's stocking was smaller that previous efforts, mostly because COVID-19 has limited staff time and resources at the zoo and other agencies that are mindful of the risk to employees.

That follows seven years of stocking a total of 2,800 beetles at the nearby Wah'Kon-Tah Prairie Conservation Area from 2012 to 2018. Like Taberville, Wah' Kon-Tah is a remnant of original tallgrass prairie, providing ideal habitat.

Last year also was the first time the team did not stock at Wah'Kon-Tah since the recovery plan was announced, as scientists stepped back to see how the beetles would do on their own. COVID-19 is limiting efforts to survey there and at Taberville this spring, but Merz said the important thing is that they got the beetles in the ground.

"It doesn't impact the population," Merz said of the limitations on surveying. "... It doesn't necessarily impact what the beetles are doing in the wild."

"We were able to continue the cycle of putting beetles out each year," he added. "By getting the beetles out, we feel we have done right by the animals."

The American burying beetle has a lot of firsts to its credit.

The American burying beetle was found in much of the eastern and central United States, but by 1989, there were only two known populations of the beetle surviving in the wild, one in Rhode Island and the other in Oklahoma. The beetle had experienced “one of the most disastrous declines of an insect’s range ever to be recorded,” according to federal records.

Before the reintroduction, the last one on record in Missouri was collected in 1972 in Newton County.

Since its listing as endangered, subsequent surveys for the American burying beetle have turned up populations in other states, including Oklahoma, Kansas and Arkansas, and there is now a proposal to downlist it from endangered to threatened, but scientists say the beetle is still missing across 90% of its former range. Merz also has previously told the Globe many of those remaining populations in the Midwest remain isolated from each other and small, making them vulnerable.

Hamilton said climate change also could affect the ability of the beetles to survive in southern parts of its range, and data collected from the reintroduction effort will guide scientists who want to know if the beetles can be moved northward, or if they will be able to move north on their own.

According to Merz and Hamilton, there are a lot of theories about the beetle’s decline, including the widespread use of DDT and other pesticides, habitat loss and fragmentation, light pollution and possibly effects on the beetle’s primary food source, which is carrion.

Following designation as an endangered species, limited reintroductions were attempted elsewhere, but the largest reintroduction to date has been in Missouri, with beetles bred in captivity at the St. Louis Zoo.

Scientists and volunteers dig a tiny hole in the prairie and place in it the carcass of a quail and a pair of beetles before replacing the soil. To track the beetles that were stocked, scientists notched the elytra, which is the hard, modified forewings that encase the thin hindwings used by beetles in flight. The notch distinguishes captive-bred beetles from wild beetles.

Merz and others have said success will mean a stable, self-sustaining population, but it's too early to tell how close they're getting, especially because they just "took the training wheels off" last year at Wah'Kon-Tah, in the words of Hamilton.

"That is the big question everybody is trying to arrive at," Hamilton said.

Still, there are hopeful signs. Following the stockings each year, scientists returned to Wah'Kon-Tah to look for evidence of reproduction, and in the summer and fall of 2016, after the stocking that year, more than 850 beetles were trapped on the prairie — 473 of those were unnotched, meaning they were offspring. It was the most successful year so far.

The scientists have said that measuring the population even without the interference of COVID-19 is problematic because the beetle is a nocturnal insect that lives below ground and can fly several miles, and weather, including heavy rains and flooding, can affect the population from year to year.

They also look each spring before stocking for what they call "overwintering beetles." Those numbers also have grown, but there have been fluctuations.

Hamilton said there is evidence the beetles are surviving and reproducing in the recovery area.

American burying beetles also have been collected at nearby public sites too. The first was found at the nearby Monegaw Prairie Conservation Area, which is about a mile away from Wah’Kon-Tah, and then at the Linscomb Wildlife Area and at Schell Osage Conservation Area, two other public tracts that are a few miles farther yet. The beetles also have been found on nearby private land up to several miles away, Hamilton said.

Merz notes that all of those public lands, as well as Taberville, are within a four-county (Cedar, Vernon, Bates and St. Clair) area that has been designated as the beetle's recovery area.

As the population expands, both Hamilton and Merz said a special designation as a “nonessential experimental population” follows the beetle. According to Hamilton, that designation means that if a nearby landowner, in the course of otherwise legal business on his property, accidentally kills a beetle, there will be no legal fallout. That designation also allows landowners to continue haying and burning their prairies, for example, as well as clearing brush, putting in fences and other work without having to worry about hurting the beetle. It also allows road building and other development to continue in the four-county recovery area.

While both notched and unnotched beetles were found at Taberville last summer, after that first stocking, there was no survey this spring to determine the overwintering population.

Still, Merz said evidence the beetles are expanding is a hopeful sign.

"What that tells me is they are moving from the site where we put them," he said. "They are finding food resources."

There also has been a drop at Wah'Kon-Tah since they stopped stocking them there, but that was anticipated.

Hamilton and Merz said the data collected each year after the stockings helps guide them as they make decisions about where and how much to stock, or whether to discontinue the effort and see if the beetles are ready to go it alone. Without the information, Hamilton said they will be operating in the dark.

Merz said the plan is to continue monitoring for the beetles at Wah'Kon-Tah and throughout the recovery area, but how much information they will be able to collect this year remains unknown. The plan also calls for the continued stocking at the second site.

"We would like to get at least three more years at Taberville, if all the trends say that what we are doing is working," Merz said.