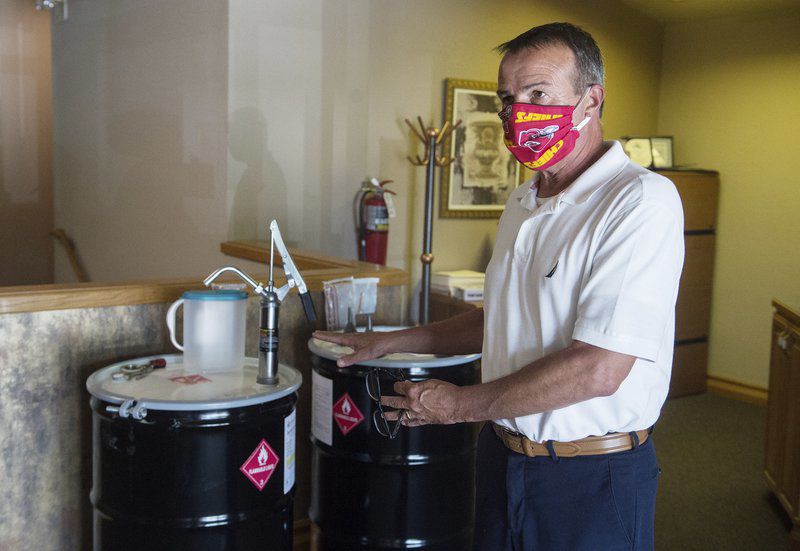 Duane Dreiling, executive director of the United Way of Southwest Missouri and Southeast Kansas, on Monday shows off two drums of hand sanitizer being distributed to area nonprofit organizations. The sanitizer was donated by Peterson Chemical Technologies, a subsidiary of Leggett & Platt, of Carthage. GLOBE | ROGER NOMER 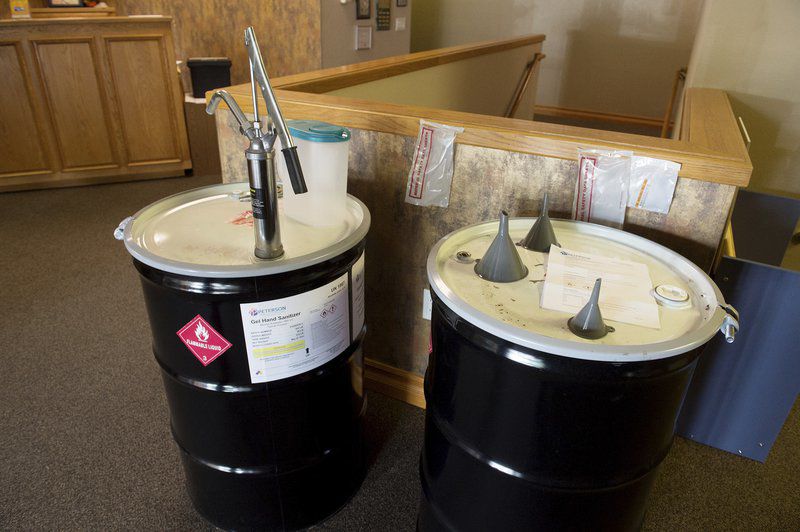 Two 55-gallon drums of gel hand sanitizer are being distributed by the United Way of Southwest Missouri and Southeast Kansas to area nonprofits. GLOBE | ROGER NOMER

Duane Dreiling, executive director of the United Way of Southwest Missouri and Southeast Kansas, on Monday shows off two drums of hand sanitizer being distributed to area nonprofit organizations. The sanitizer was donated by Peterson Chemical Technologies, a subsidiary of Leggett & Platt, of Carthage. GLOBE | ROGER NOMER

Two 55-gallon drums of gel hand sanitizer are being distributed by the United Way of Southwest Missouri and Southeast Kansas to area nonprofits. GLOBE | ROGER NOMER

Roughly $1,600 worth of hand sanitizer has been donated to the United Way of Southwest Missouri and Southeast Kansas by Peterson Chemical Technologies, a Leggett & Platt subsidiary, for free distribution among area nonprofits.

Over the past three weeks, hand sanitizer — often dubbed “liquid gold” for its germ-killing properties — has become a hard-to-find commodity as the Joplin metro area quickly morphed into a pandemic hot spot.

“This is what the United Way is all about,” said Duane Dreiling, the organization’s executive director. “I believe this is right in our wheelhouse … in helping the nonprofits in our community. With our spike in cases, what I was hearing is that it was getting more expensive” to purchase hand sanitizer in bulk, “which was really stressing the budgets of the nonprofits and agencies and community organizations that are providing that direct contact and services to clients here in our community.”

Two 55-gallon drums of hand sanitizer were dropped off last week at the United Way center in Joplin, which is located on East Third Street.

“I want the (hand sanitizer) out in the community," Dreiling said. "I don’t want it sitting in barrels inside my office. If there is a nonprofit or a community organization that is in need of hand sanitizer, please contact our office.”

Some local agencies have already acted on the United Way’s offer. Since Friday morning, about 30 gallons have been donated to local organizations such as the Boys & Girls Club of Southwest Missouri and the Joplin-based Lafayette House, among others. Approximately 10 gallons were transported from Joplin to the nearby United Way office in Pittsburg, Kansas, he said.

The price of hand sanitizer has skyrocketed over the last few months, said Jennifer Shotwell, chief executive officer for the Area Agency on Aging. Agency officials collected 4 gallons of hand sanitizer from the United Way on Friday, and it will be used mainly for staff at the main Joplin office and the seven area senior centers — still closed due to the pandemic — located in Joplin, Carl Junction, Webb City, Carthage, Lamar, Neosho and Noel.

“We were (recently) quoted $38 per gallon,” Shotwell said. Before the COVID-19 pandemic, those prices would have hovered around $22. Two months ago, she drove to Jefferson City to purchase 10 gallons of sanitizer from a converted distillery for $20 a gallon — a bargain at the time. “The cost has become prohibitive. I know demand drives up the price sometimes," she said, but in a crisis, the increased cost is "just unbelievable.”

“It’s hard to come by. I can’t thank the United Way enough” for donating the sanitizer, Shotwell said. “It was timely.”

According to a United Way release, while Dreiling and others were debating costs when it comes to bulk purchases, Amy DeArmond, a United Way board member and Leggett & Platt employee, reached out to officials with the Fort Smith, Arkansas-based Peterson Chemical Technologies, which had begun producing hand sanitizer when the pandemic first hit the nation back in March. After DeArmond explained the need for the product here in Southwest Missouri, Peterson officials were quick to donate the drums.

“I’m calling this a BYOB event — ‘bring your own bottle,’" Dreiling said. "I don’t have containers here, but I’m finding out that agencies have already bought it in bulk and have containers and they’re able to come in” and, using a hand pump Dreiling installed himself, fill up their containers.

"This was just something where we pulled together our resources pretty quickly, and I'm just thrilled we were able to pull this together in the time that we had," he said.

United Way will distribute hand sanitizer out of its offices in Joplin and Pittsburg while supplies last. To maintain social distancing, it requests that nonprofits call or email to schedule appointment for pickup. In Joplin, call 417-624-0153 or email ddreiling@unitedwaymokan.org. In Pittsburg, call 620-231-08140 or email bburk@unitedwaymokan.org.

JOPLIN, MO - Gary D. Copeland, 59, a driver for Republic Services, passed away Monday, August 3, 2020. Services are planned for a later date. Arrangements are under the direction of Ozark Memorial Park Crematory, Joplin.