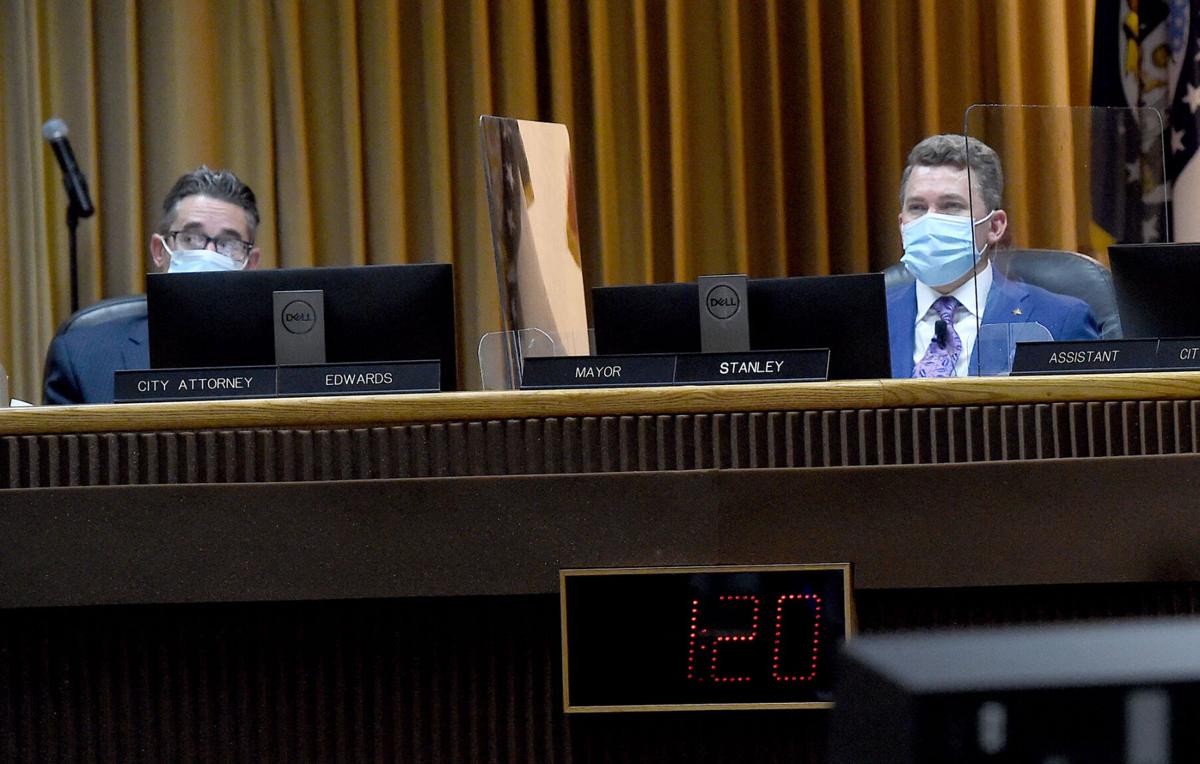 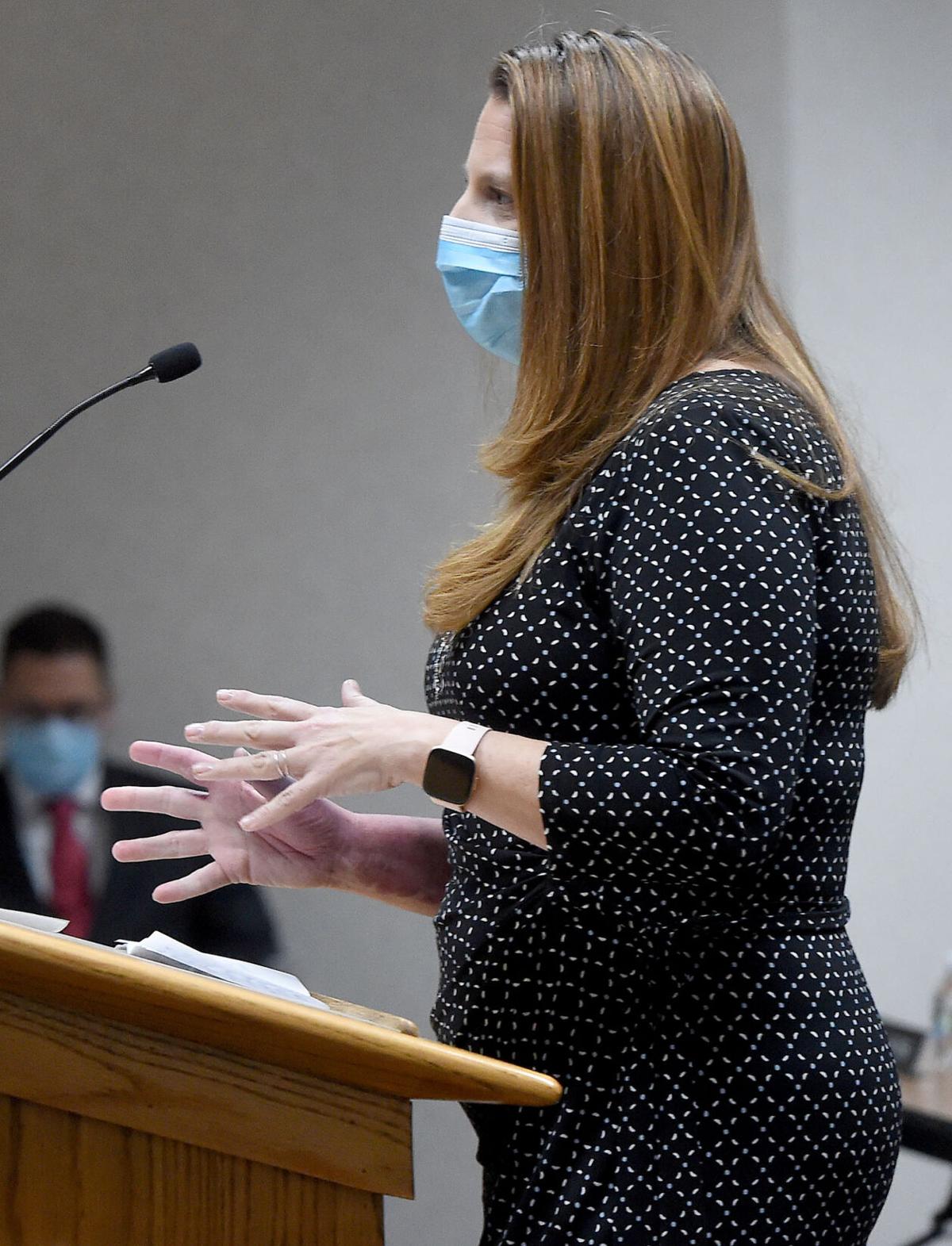 Community Clinic of Southwest Missouri Executive Director Stephanie Brady updates council members on Covid-19 concerns at the clinic as she utges the council to pass a mask ordinance for the city during a special session on Thursday night at City Hall. Globe | Laurie Sisk 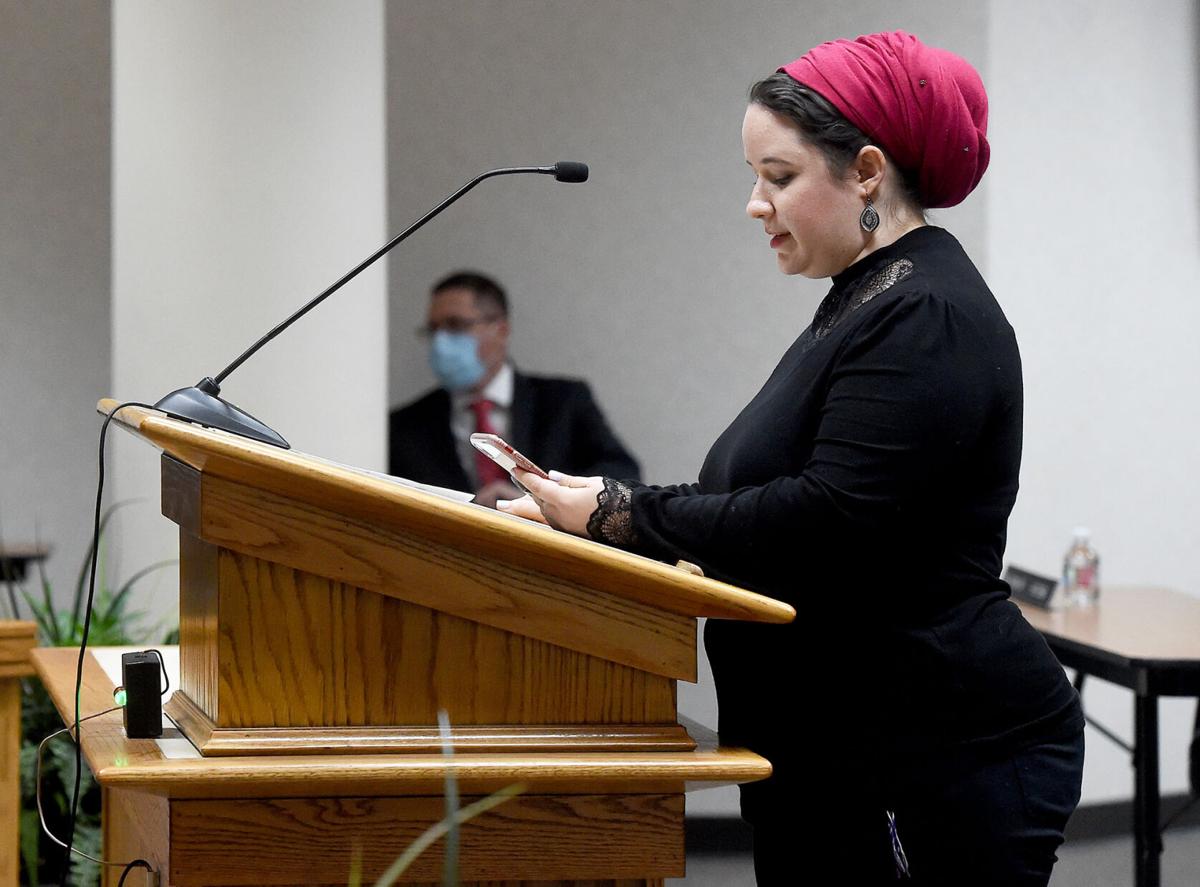 Joplin resident Abigail Covington reads from her phone as she voices opposition to a mask ordinance during a Joplin City Council special session on Thursday night at City Hall. Globe | Laurie Sisk 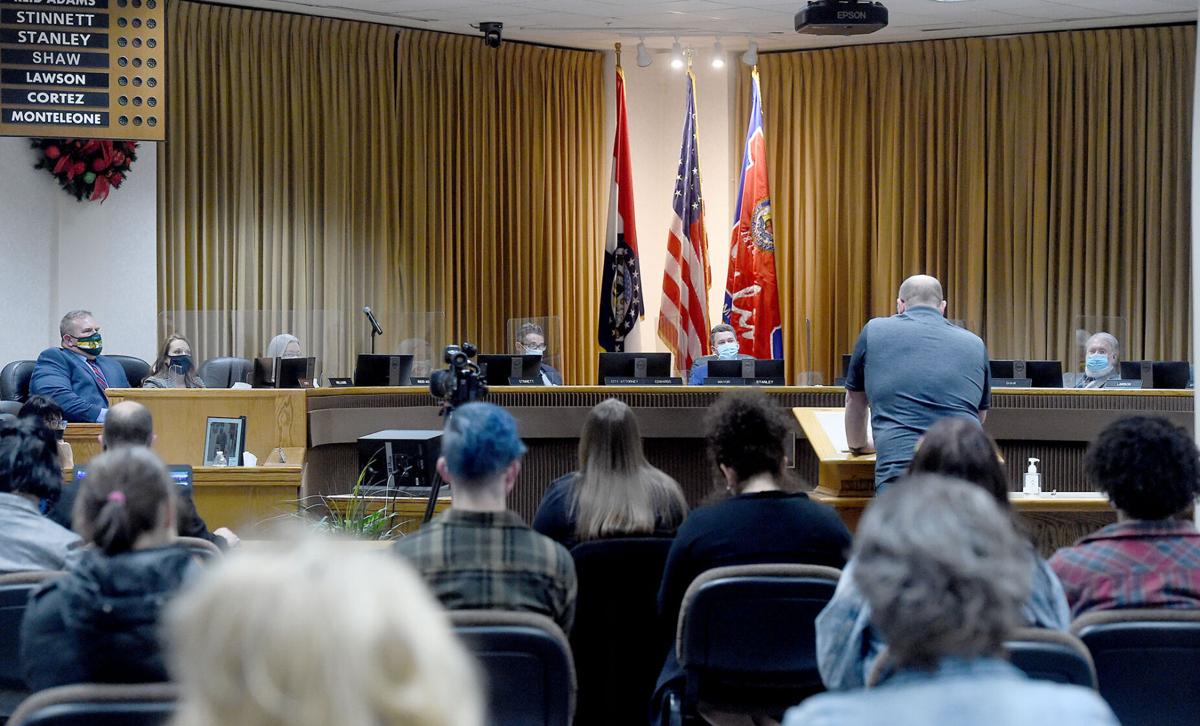 Community Clinic of Southwest Missouri Executive Director Stephanie Brady updates council members on Covid-19 concerns at the clinic as she utges the council to pass a mask ordinance for the city during a special session on Thursday night at City Hall. Globe | Laurie Sisk

Joplin resident Abigail Covington reads from her phone as she voices opposition to a mask ordinance during a Joplin City Council special session on Thursday night at City Hall. Globe | Laurie Sisk

After hearing testimony by representatives of six hospitals and health agencies that a mask requirement is needed to try to reduce the rapid rise in COVID-19 cases as well as comments from 28 residents, the Joplin City Council enacted a new mask mandate Thursday night, effective immediately.

The measure will be in force until 11:59 p.m. Feb. 28, unless the council revises it before then.

There was nearly three hours of public comment on the proposed measure as well as council discussion at the special meeting. Councilman Keenan Cortez made a motion to approve the mandate, seconded by Anthony Monteleone. The vote was 6-3, with Gary Shaw, Doug Lawson and Phil Stinnett casting the "no" votes.

The council decided to consider a mask mandate again in response to a letter area cities and counties received from health authorities asking for the requirement. Joplin had imposed a mandate in July and allowed it to expire in August.

Dr. Ron McNab, head of the COVID-19 units at Freeman Hospital West, said that the local health care system is in danger of becoming overwhelmed with coronavirus cases.

"COVID-19 cases in our community are climbing precipitously," he said. In six weeks, the hospital has seen virus admissions climb from one in 10 patients to one in four patients. Those patients take a lot more resources for care than some of the other types of illnesses and diseases that are treated at the hospital.

Jeremy Drinkwitz, president of Mercy Hospital, said the ability to take care patients at Mercy is getting limited because of the amount of staff and resources needed to take care of COVID-19 patients. Currently, 39 percent of the hospital's inpatients are being treated for the disease. He said the health care system needs help to try to reduce that number.

The nation's medical experts are recommending the use of masks to push down infection rates, Drinkwitz said. "They're telling us this is the right thing to do. I'm asking you to follow the science."

On top of the extra care needed for those patients, 52 of the hospital's workers were out Thursday with the virus.

A mask mandate could push down the case numbers enough to get through until COVID-19 vaccines are available, Drinkwitz said.

Stephanie Brady, executive director of the Community Clinic, also testified about the drain virus cases are causing at the clinic. She said the clinic provides primary care for about 2,000 area residents who do not have insurance. The clinic is seeing 10 to 15 patients a day with active symptoms and is getting calls from about 20 people a day seeking testing for the virus.

"We are really struggling to balance the needs of chronic patients with the COVID patients," she said. Workers are scared of the spread and feel like the community does not care about them because people have resisted wearing masks.

Steve Douglas, of Access Family Care, said several of its clinics have been shut down because of a shortage of workers resulting from the COVID-19 demand. "We are in a staffing crisis," he said. "We are just worn down. ... Our system is at a breaking point."

Emergency rooms would be flooded with patients if Access were forced to close entirely, he said.

But as during past council decisions regarding the pandemic, a number of people were in the audience to speak against the mandate.

Abbie Covington told the council, "We are not at war with you. We are at war with the devil." She went on to pray for each council member, saying favorable things in the prayers for those members with whom she agreed, but calling on God to make the others sick at their stomachs if they did not "do the right thing" and reject the mandate.

Troy Kinast contended that many states that have mask mandates still have higher case numbers than those without the regulations.

Rod Noran told the council that "the problem is we have lost faith. We don't believe we have a creator," and that is causing the pandemic. "I want you to listen to the creator of the science," and turn to faith in Jesus Christ for an answer as well as pursuing innovations in medical treatments rather than using masks.

Mayor Ryan Stanley, who had said at the start of the meeting that outbursts would not be tolerated, told the man to leave the council chambers.

Shaw said that although his heart went out to the medical professionals who asked for the mandate and he knows some people believe very strongly in masks, he questions how well they work.

"I want to help people, but I want people to help themselves," and residents should be allowed to do as they believe, he said.

Because there also are strong beliefs against masks and a mandate expressed by some residents in comments made at the meeting, "I'm concerned that a mask mandate will divide us when we need to be together," Shaw said.

After the vote to impose the mandate, Covington shouted out, and she too was told the leave the room.