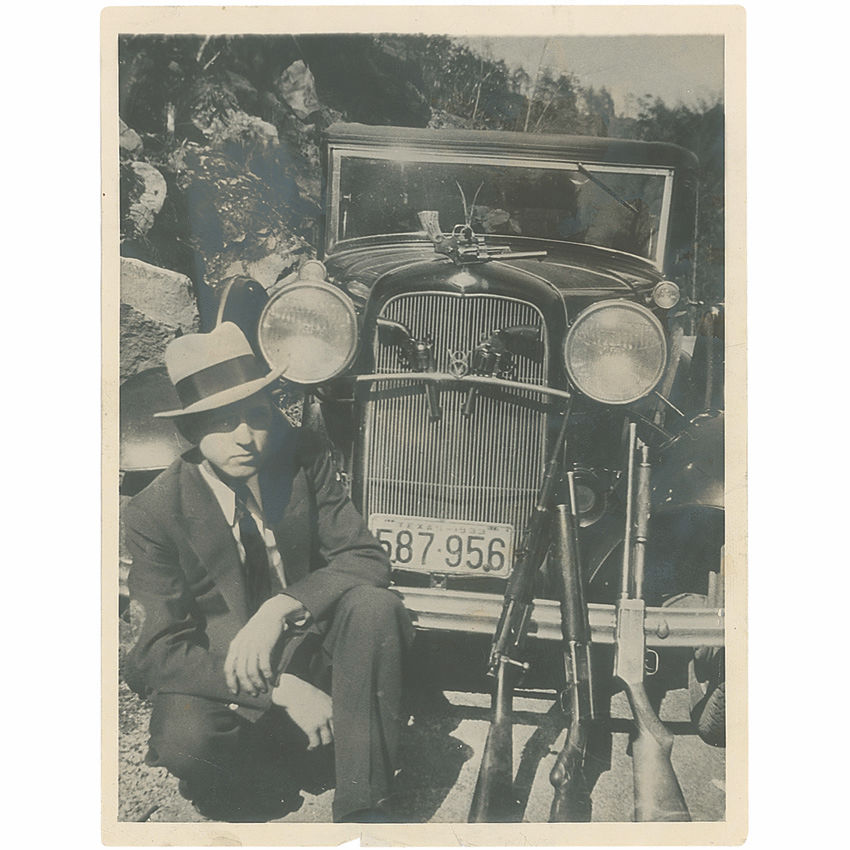 This photo of Clyde Barrow, recovered by Joplin police and developed by The Joplin Globe, shows several of the firearms the gang used during its spree. The shotgun up for auction can be seen on the right.

This picture shows the shotgun up for auction Saturday.

This photo of Clyde Barrow, recovered by Joplin police and developed by The Joplin Globe, shows several of the firearms the gang used during its spree. The shotgun up for auction can be seen on the right.

This picture shows the shotgun up for auction Saturday.

BOSTON, Mass. — A sawed-off shotgun used by some of history's most notorious criminals in a Joplin gunfight with law enforcement officials was sold Saturday at auction.

And it won't leave Joplin, according to auction organizers.

"When I spoke to the winning bidder, he was focused and passionate about the history of Joplin and the importance of Bonnie and Clyde's place in it," said Bobby Livingston, executive vice president of RR Auction. "He was determined to make sure the shotgun remains a part of Joplin history."

The bidder, who wanted to remain anonymous, won the lot for $68,750. Livingston said that the man who bought it understood the weapon's significance to Joplin, including its connection to history and the sacrifices made by law enforcement officers.

It was one of several items related to Bonnie and Clyde and the Barrow Gang that RR Auction, based in Boston, offered on Saturday. Some of the other related items include:

• A Bulova wristwatch, recovered from Clyde Barrow's body after his death in a 1934 gunfight with officers, was sold for $112,500.

• Bidding for a book of poetry written by Bonnie Parker reached about $25,000 until the cosigner withdrew it.

The Western Field Browning Model 30 shotgun was recovered after a 1933 gunfight at a southern Joplin apartment, which resulted in the death's of Detective Harry McGinnis and Newton County Constable John Wesley Harryman. The gang was able to escape, but left behind supplies, including a camera with a roll of film that was developed by the Globe — those pictures were transmitted across the country and gave the public their first look at the criminals.

Detective Tom De Graff, a detective with the Joplin Police Department during that 1933 raid, kept the gun in his office; it was later gifted to him upon his retirement. The shotgun was kept by his children and grandchildren as a family heirloom until current owner Jerry Watson and his siblings decided it was time to sell it.

The gun's authenticity was verified by photo-matching it to one of the photos of Clyde Barrow posing alongside several firearms arranged in front of a car, and through De Graff registering it in 1946 with the Treasury Department. Before the auction, it was valued at $75,000.

No plans have yet been announced for the shotgun — all Livingston could reveal is that it will stay in Joplin, he said, and that both the buyer and seller are happy with the deal.

"It's important to note that the proceeds are going to descendants of a Joplin detective," Livingston said. "They were very emotional about selling the gun in the first place, and they are thrilled that it's staying in Joplin."

ICYMI: Five of the top stories from last week (Sept. 29)

The following are five of the top stories published in the Globe during Sept. 23-27. In case you missed them, here’s a recap:

Our view: Bonnie and Clyde's shotgun, up for auction, belongs in Joplin

A 12-gauge sawed-off shotgun with a remarkable history would make a great addition to the Joplin museum. Now up for auction, we hope someone —…