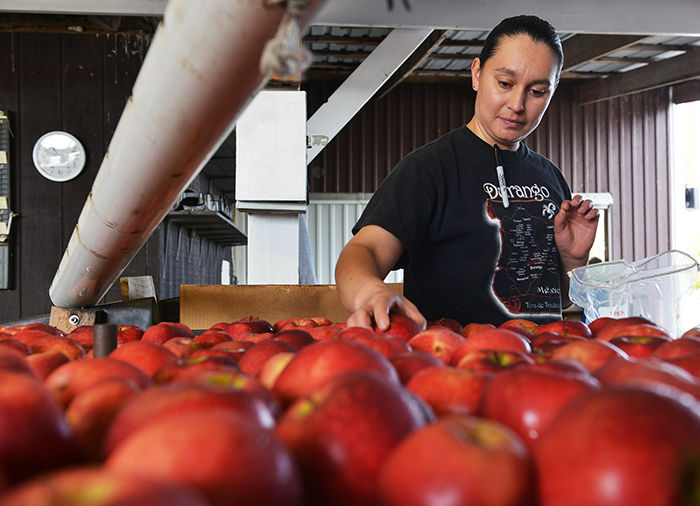 Vanessa Trujillo selects apples from Murphy's Orchard near Marionville. The orchard's owners say they are having one of the best apple seasons they've experienced in recent history. 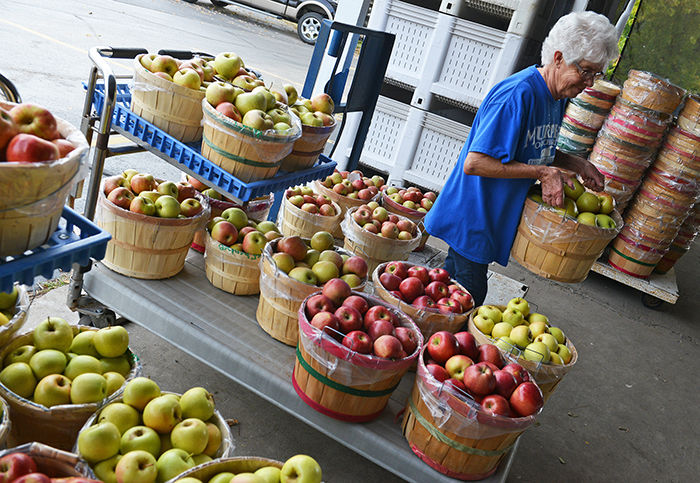 Baskets of apples were picked and ready to go out the door last week, with an assist from Betty Edgar. 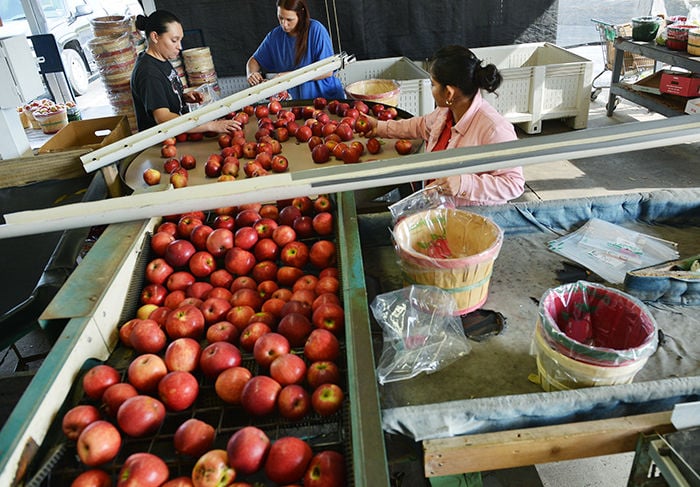 Vanessa Trujillo (left), Jessica Nelson (center) and Ruby Rosas are some of the staff kept busy in the fall with apple harvest.

Vanessa Trujillo selects apples from Murphy's Orchard near Marionville. The orchard's owners say they are having one of the best apple seasons they've experienced in recent history.

Baskets of apples were picked and ready to go out the door last week, with an assist from Betty Edgar.

Vanessa Trujillo (left), Jessica Nelson (center) and Ruby Rosas are some of the staff kept busy in the fall with apple harvest.

MARIONVILLE, Mo. — A century ago, Missouri was the apple capital of the world. Today, apple orchards can be hard to find in the region.

Even in the past decade, the trend has continued downward. Seven orchards in Lawrence County have dwindled to just one in recent years.

He and his wife Paula have owned Murphy Orchards at Marionville since 1981. Thirty-three years later, they still are at it, sunup to sundown, on what has expanded to include 132 acres.

They’re having one of the best apple seasons they've experienced in recent history. The weather, Murphy said, has been perfect for apples this year.

But because there are no guarantees from year to year, they have diversified: strawberries in May, peaches through the summer and into early fall, and tomatoes year-round in a high tunnel. They also have grapes, blueberries, blackberries and a retail area where shoppers can buy jams, jellies, pecans, walnuts and apple peelers.

Even among the apples, their business is diversified: They now grow 20 to 25 varieties — each of which comes into ripeness for a period of 10 or so days beginning in mid-August and continuing into October.

In other words, not putting all of their apples in one basket has helped them stay afloat.

“Last year, the apples weren't good. The year before that, same thing. Several days of 100-degree heat can kill off a crop quick,” Murphy said.

“One year you could walk out there and it smelled like apple pie, because they had cooked right on the trees.”

“That’s why we're diversified,” he said.

Their products show up at area farmers' markets, in grocery stores and are sold in their retail area, which is open six days a week.

To keep up, Murphy Orchard employs four pickers, three packers and five workers in the retail area. He said he could employ two more if he could find the right people.

“People who work here are trained in a little bit of everything. One day they might be picking tomatoes in the morning and peaches in the afternoon. They must know how to run the cider press. Really, they wear many hats,” Murphy said.

“You sort of take pride in it, like raising kids,” Murphy said as he drove his pick-up truck past rows of dwarf apple trees that, despite their short height, are a few decades old.

“I planted everything that’s here.”

Murphy’s own children, now adults, have earned masters and doctoral degrees, he said, and he encouraged them to seek careers elsewhere.

“I told them they didn't have to follow in my footsteps,” he said. “It’s a hard business, long hours, not always profitable, and requires a great deal of investment. (With) other jobs, they can make better money than they can make here.”

Investing in insecticides and fungicides — vital, he said, in the Midwest’s humidity and high heat, which fosters diseases — cost him $65,000 this year.

But when Murphy broached the subject of “the future” with his children, he said, “none of them wanted to discuss selling it.”

“My son Wesley decided he wanted to try it,” Murphy said.

Sometime next year, David and Paula plan to build a home on acreage across from the orchard — a place they will retire, he said.

But he doesn’t stop to think about that much now. He’s juggling his calendar by variety of apple: Braeburns and Romes peaked around Oct. 1; Fuji a week later; York and Arkansas Black are ripening now, while Granny Smith will be ready around Oct. 15.

He’s ensuring quality control: No apples with marks, poor color or a small size make it into bags or bushel baskets.

And when apple picking season is done, there will be winter chores.

“There are 5,000 trees to prune and fertilize, equipment to fix, conferences to attend on spraying regulations and techniques,” he said.

Murphy also is working on reaching out to the younger generation of would-be orchard-goers.

“It concerns me ... you know, 90 percent of our trade has historically been with older folks, 55 years old plus, because that’s the generation that puts up apples for winter,” he said. “They make apple butter and applesauce, they bake and freeze pies.”

An older couple, Sue Pitts and her husband, Darrel, who drove to the orchard from Springfield last week, underscored that.

“We’ve been coming here several years,” Sue said. “They’re the best apples we can get around here. I use them for everything. Pies. Apple cake. Apple butter.”

Carolyn Walker, Joplin, made the trip last week, too, to purchase several bags of apples for pies, which she’ll then freeze.

Murphy is optimistic, however, that the younger generation might keep the tradition of going to an apple orchard each fall alive.

“I’m starting to see them get involved,” he said. “Young couples will bring their kids out to pick so they have the experience.”

“He knows a lot,” Murphy said. “He likes to help us keep the place running.”