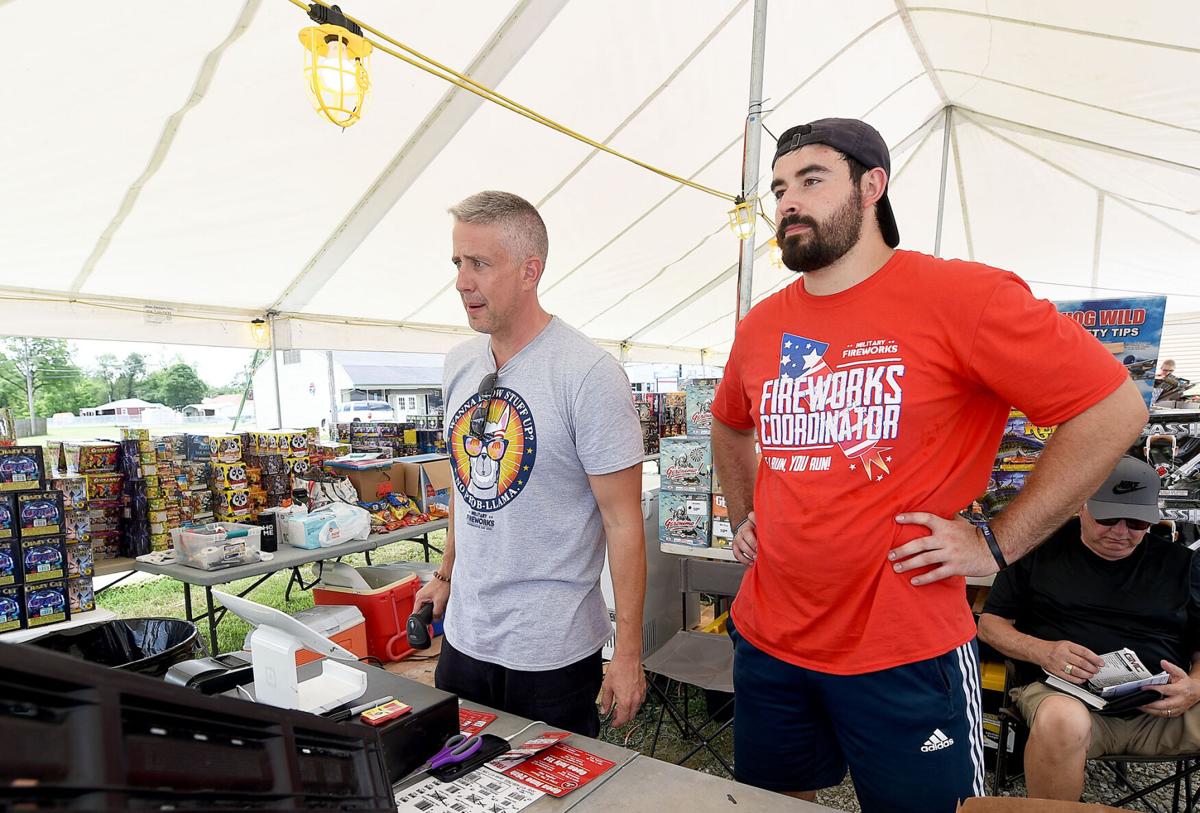 Forge Center for Virtue and Work phase two participant Ellis Jones (left) and Forge director of advancement Travis Hurley man the front counter at the Forge fireworks stand on Thursday. Part of the proceeds will benefit the program, which works to help participants enter the job market. 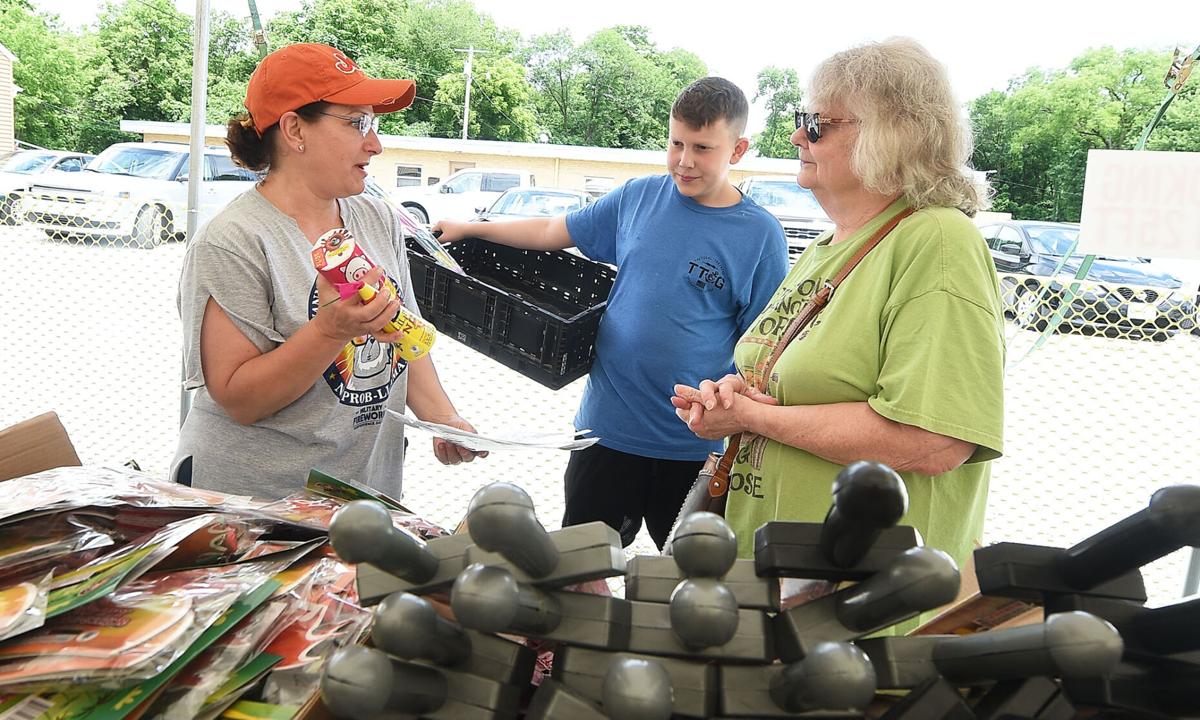 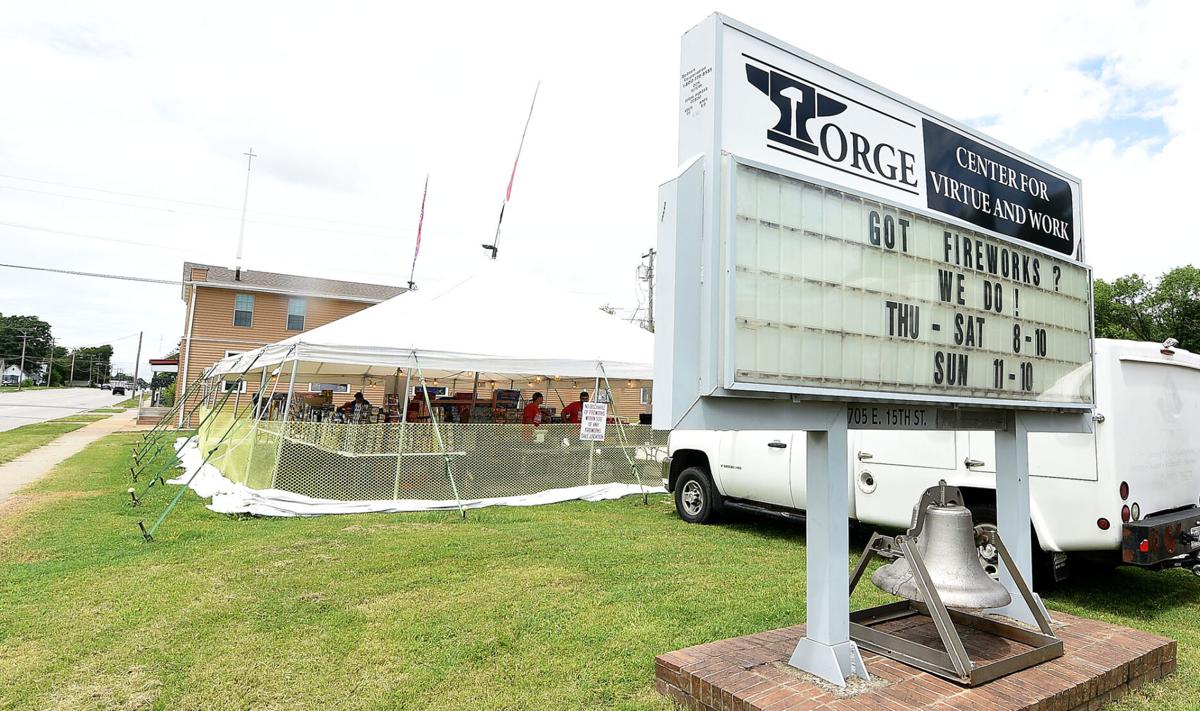 The Forge Center for Virtue and Work fireworks stand sits outside its East 15th Street center. 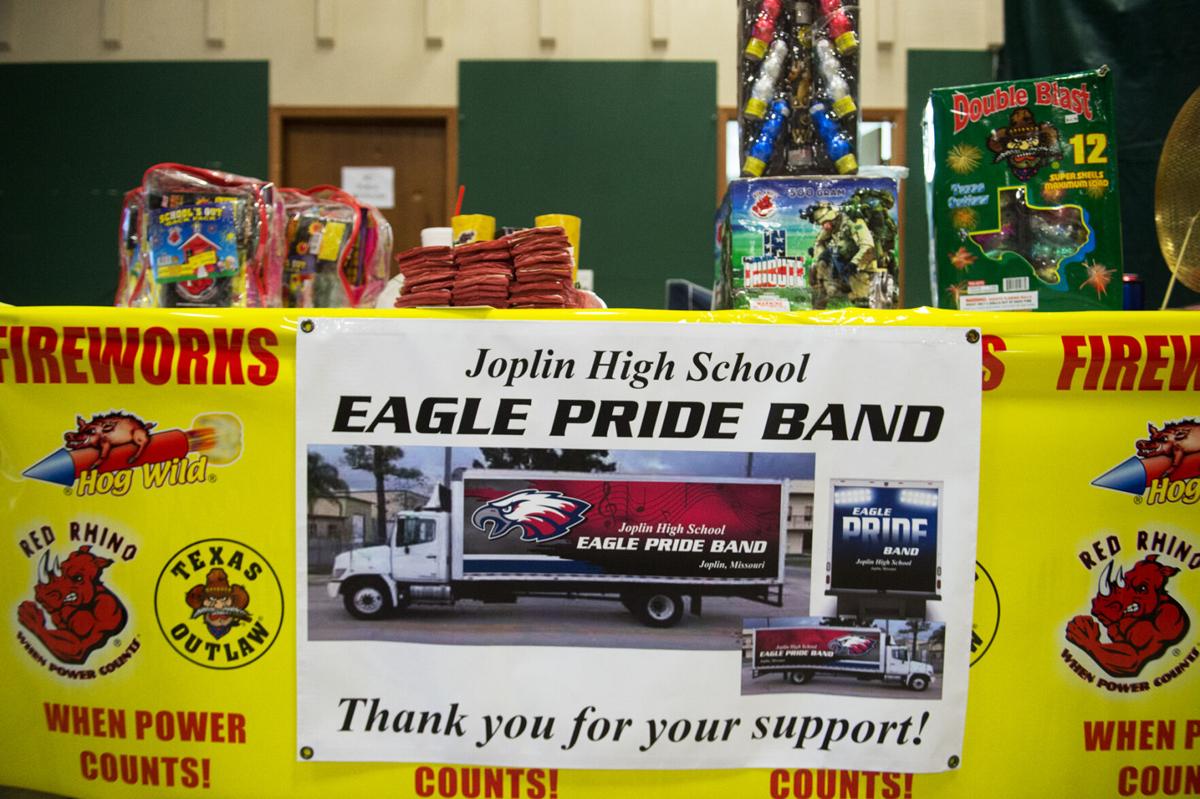 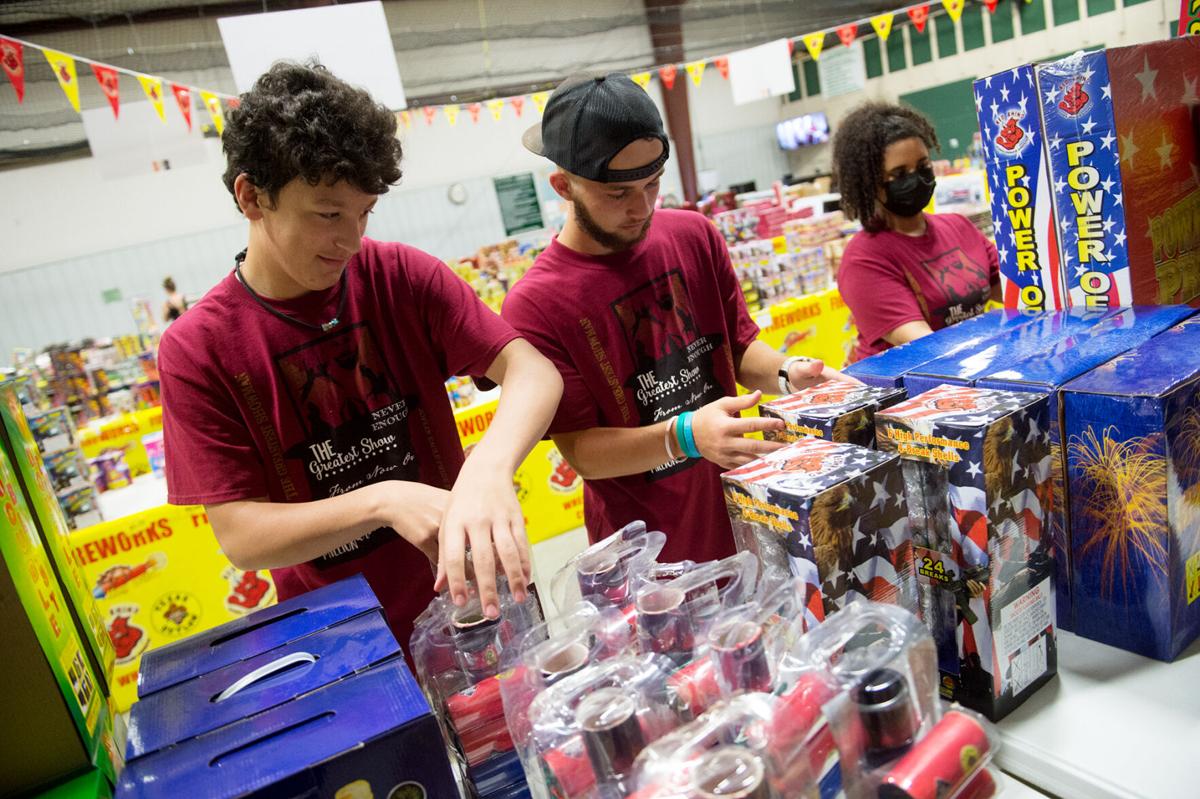 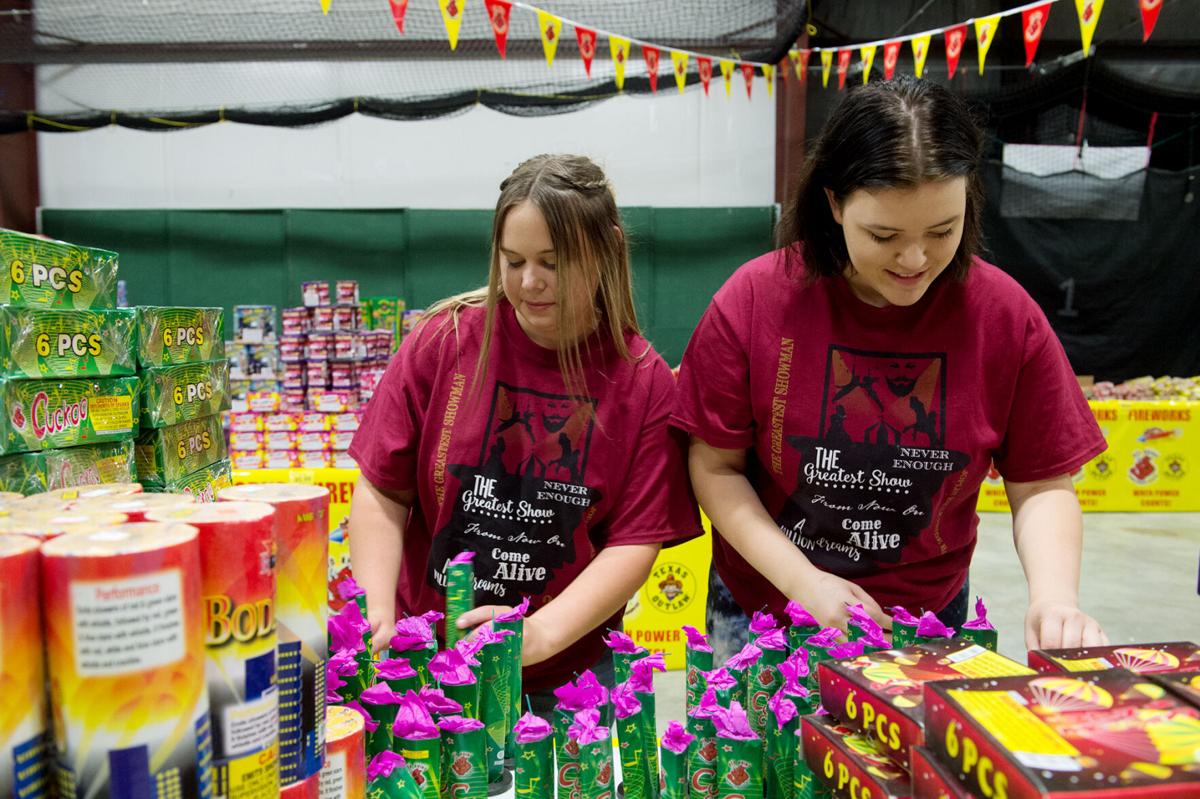 Forge Center for Virtue and Work phase two participant Ellis Jones (left) and Forge director of advancement Travis Hurley man the front counter at the Forge fireworks stand on Thursday. Part of the proceeds will benefit the program, which works to help participants enter the job market.

The Forge Center for Virtue and Work fireworks stand sits outside its East 15th Street center.

With consumers spending almost $2 billion on pyrotechnics annually now days in the U.S., more and more nonprofit organizations are using fireworks stands as a means of raising funds.

Two of those in Joplin are the Forge Center of Virtue and Work operated by Watered Gardens Gospel Rescue Mission and the band program at Joplin High School.

While most Americans celebrate the birth of the nation Sunday, Forge program student Riley McGuire, 30, is celebrating his own triumphs.

“I’m celebrating the fact that I’m not sitting in prison, the fact that I’m making something of myself rather than just coasting by doing what I feel like,” McGuire said. “I’m here, and I’m able to help people now.”

The Forge Center of Virtue and Work at 705 E. 15th St. in Joplin is a residential recovery program was created by Watered Gardens Gospel Rescue Mission, which gives men who’ve struggled with chronic homelessness, addiction or incarceration another chance at life. It’s one of the many causes area fireworks sales will go toward this year.

Students in the Forge program progress through five phases over 13 to 15 months in which they build discipline, healthy habits and life skills to become self-dependent and responsible. Jamie Myers, director of the Forge Center, said there are currently 12 students in the program and that at least 17 men have graduated.

“Our philosophy is that if your heart and your thoughts aren’t changing, then probably your behavior won’t change,” she said. “It’s not just about getting a job that we’re focusing on here. It’s about becoming a new man.”

McGuire, an Arizona native who had been affected by drugs since he was 15, is now in phase two of the program.

“I was a mess,” McGuire said. “If it wasn’t for the Forge, I would either be selling drugs or be in prison.”

Since joining the Forge in January, McGuire has earned his general educational development certificate, trained in construction and submitted job applications. He aims to one day open up a nonprofit drug addiction program of his own and attend college to become a drug counselor to help others on their path to a better life. He said he hopes to graduate from the Forge program in the next nine months.

“That’s one thing that’s motivating me, is, ‘Hey, how many people can I really reach and how many kids can I help?’” he said. “I’d rather go to a counselor who’s been through it and understands the struggles and the addiction itself.”

Military Fireworks, set up in the Forge Center’s parking lot on East 15th Street, is donating 20% of its proceeds to help benefit students like McGuire. Fireworks will be sold from 8 a.m. to 10 p.m. each day through Sunday.

Last year’s firework fundraiser for the Forge raised $7,389.59, which can cover about two students in the program.

Travis Hurley, director of advancement at Watered Gardens, said they’ve increased their net proceeds every year by partnering with Military Fireworks and raised $4,299.63 in 2019. The goal this go-round is to collect $10,000. Students from the Forge have been working daily shifts and assisting customers.

“It’s good for them to have an investment in the work,” Hurley said. “I hope that the students know that this community loves them. We just want them to know that where ever they’ve been, their future is bright if they start making different choices.”

Crazy Debbie’s Fireworks at 3733 N. Main Street Road has also launched its annual fundraiser in which 10% to 15% of each sale will benefit the Joplin High School band. Proceeds will directly support students, cover funding gaps, as well as repair and replace equipment. The fireworks store is open from 10 a.m. to 11 p.m. through Sunday.

“I think it’s important to note that people have a lot of different opportunities to buy fireworks in the area, but sometimes they don’t know where that money goes,” said Brian Kelley, band director. “For us, it stays with our kids. It’s a win-win. The money we raise not only supports the Eagle Pride marching band, but it applies to the Jazz Ensemble, the concert band season, winter guard, indoor percussion and all of the different facets of the band program.”

This is the Joplin High School band’s signature annual fundraising event where they raised more than $6,000 last year. The money has helped with instrument repairs and sponsored students in financial need, among other things.

The location is also accepting cash/check donations and is selling raffle tickets for a chance to win firework bundles. Raffle tickets cost $1 each or $5 for six. Four winners will be announced at 4 p.m. Sunday.

“We’re accepting donations this year for upgrading our box truck in the district by giving it a face-lift and a new prideful design to showcase the community,” Kelley said. “We use it for shows, and Sign Designs partnered with us to make a fantastic design. Right now, we’re trying to raise $4,000, which will pay for the upgrades.”

High school band students and parents are also volunteering their time to work at Crazy Debbie’s Fireworks. Kelley said more than 500 shift time slots have been filled by 60 students and 40 parents.

“Students have been doing different tasks like working the cash register, working the floor or stocking or out by the road holding up signs to let the community know we’re open for business, and it supports the band program,” Kelley said. “These are life skills, and I think a lot of our students haven’t worked jobs like this before. We want the kids to be involved, and they take a lot of pride in it.”

Aidan Kester, a 15-year-old who plays percussion in the band, has worked at the fireworks store for the past two years.

“It’s definitely helping a lot with my communication skills,” Kester said. “I’m doing the register this year. I’m not that great at math, but it’s been helping me with it.”