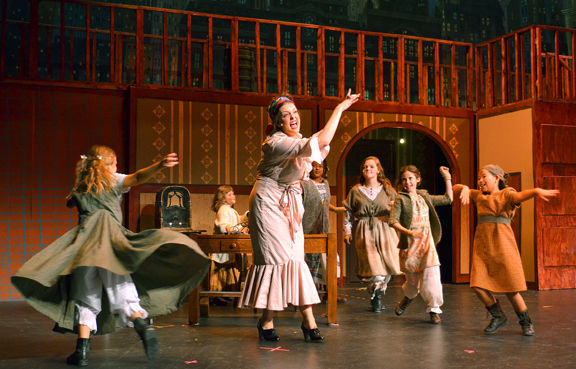 Breana Clark (center) sings, surrounded by running cast members, during a rehearsal of the Pittsburg Community Theatre production of "Annie." 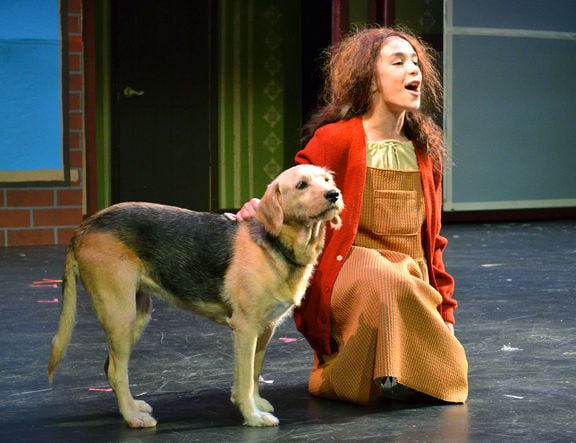 Breana Clark (center) sings, surrounded by running cast members, during a rehearsal of the Pittsburg Community Theatre production of "Annie."

McKenna Shaw has known about Annie for a long time.

"I've always loved 'Annie,'" said the 12-year-old. "It's one of my favorite movies ever. When I found out we were going to be doing it here, I got really excited."

Shaw is playing the titular role in the Pittsburg Community Theatre production, which runs until Sunday at Memorial Auditorium. She is one of a cast of more than 60 of all ages, from young children to seasoned actors. McKenna said Annie is one of the most compelling characters across a wide swath of fiction.

"She has a combination of being tough but caring," McKenna said. "There are so many different parts to her personality, I wish I could be more like her."

While Annie in the musical goes on a hunt for her parents, McKenna doesn't have to look far for hers -- her father, Greg Shaw, is directing the play.

While she has worked with her father on different productions, this is the first time she's had a lead in a musical where her father was directing. Her mother, Angela Shaw, is also part of the cast. Greg Shaw said he sees his daughter embracing the role.

"She's really into performance, as a singer, dancer and actor," he said. "If you ask her right now, her goal is Broadway. She's into live performance and all that brings."

The cast is filled with family members -- from fathers and sons to siblings.

That's fitting, Greg Shaw said, because despite messages about optimism in the time of the Great Depression, the musical's main message deals with family.

"One of the biggest themes is family and finding it in lots of different forms," Shaw said. "It mirrors or parallels what we have going on across the country today with nontraditional families and step-parents in all forms.

"These are becoming more and more of an accepted reality."

Based on Harold Gray's comic "Little Orphan Annie," the story of the red-headed orphan was converted into a musical by lyricist Martin Charnin in the early '70s, according to information from the musical's official website.

After working with composer Charles Strouse and writer Thomas Meehan, the musical made its Broadway debut in 1977.

That engagement ran for more than 2,300 performances and won seven Tony Awards, including for Best Musical and Best Score.

The musical was made into a movie in 1982, sold to Columbia Pictures for a record-breaking $9.5 million. It starred acting powerhouses such as Carol Burnett, Bernadette Peters, Albert Finney and Tim Curry. Shaw said he was excited to direct "Annie" when approached by the theater's board of directors.

"I've wanted to do a family musical, a big-book musical," Shaw said. "We did 'The Wizard of Oz' last year, and it was a huge success. We've got a lot of feedback that the community really is enjoying musicals."

"Annie" in particular has stood out, he said. After seeing the musical on Broadway, he's wanted to direct a musical with such an impressive scope.

"One of the things that struck me was just how grand everything was," Shaw said. "The grand scale of everything, from the opulence of Warbucks Mansion to the green coat and bright red traditional dress that's a throwback to the comics,"

Part of capturing that magic, from the dingy orphanage to the exquisite manor, has been working with master carpenter Linden Little and a staff of about 15 crew members. The set features hinged panels that cleverly transform a wall underneath a balcony back and forth.

An orchestra of about 20, directed by Susan Laushman, rounds out the cast and crew. The cast is big on purpose -- Shaw said orphans have been added for bigger dance routines and choruses. But the musical also offers several great roles for adults, including the role of Daddy Warbucks, played by Duke Walter.

"Annie" will be presented until Sunday at Memorial Auditorium. Showtimes are at 7:30 p.m. Friday and Saturday, and 2 p.m. Saturday and Sunday. Tickets: $12. $10 for seniors and students, $8 for balcony seats.