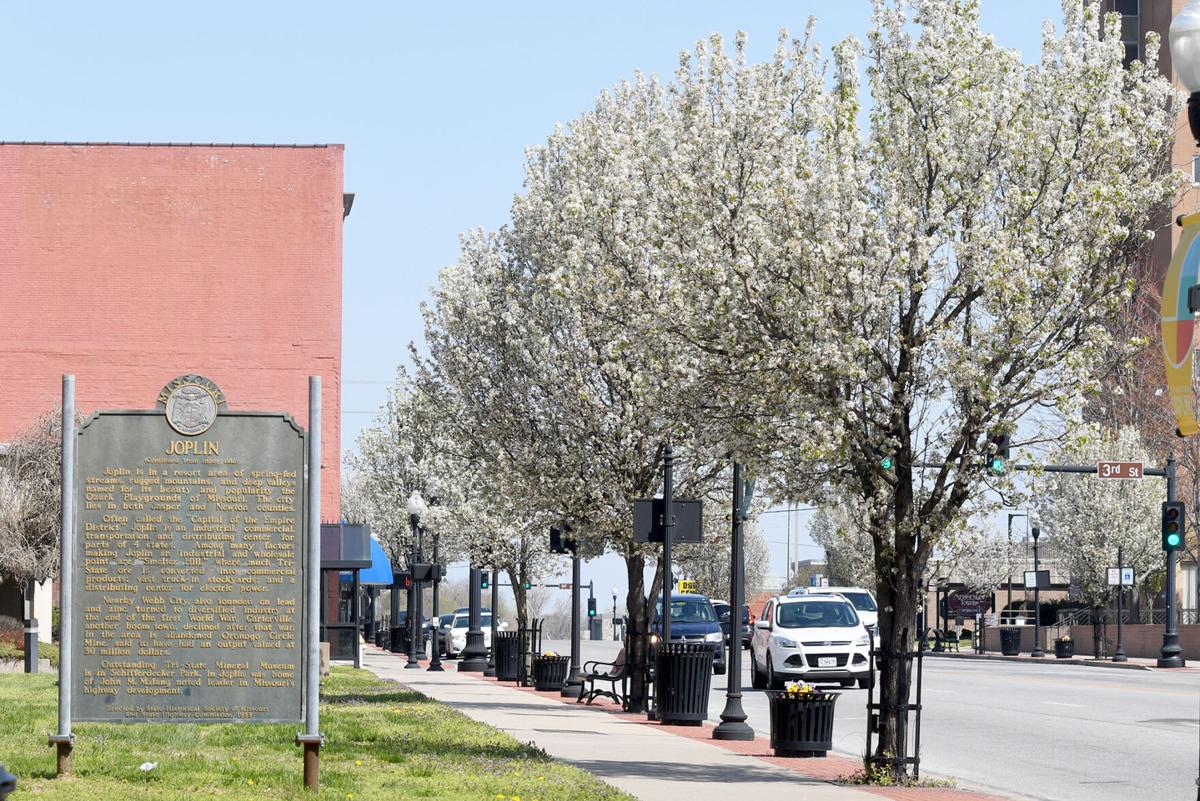 A row of Bradford pear trees stands out against a blue sky over Main Street in downtown Joplin. The ornamental trees, which were planted many years ago, are now known to be invasive and have been blacklisted by many environmental and conservation groups. GLOBE | LAURIE SISK 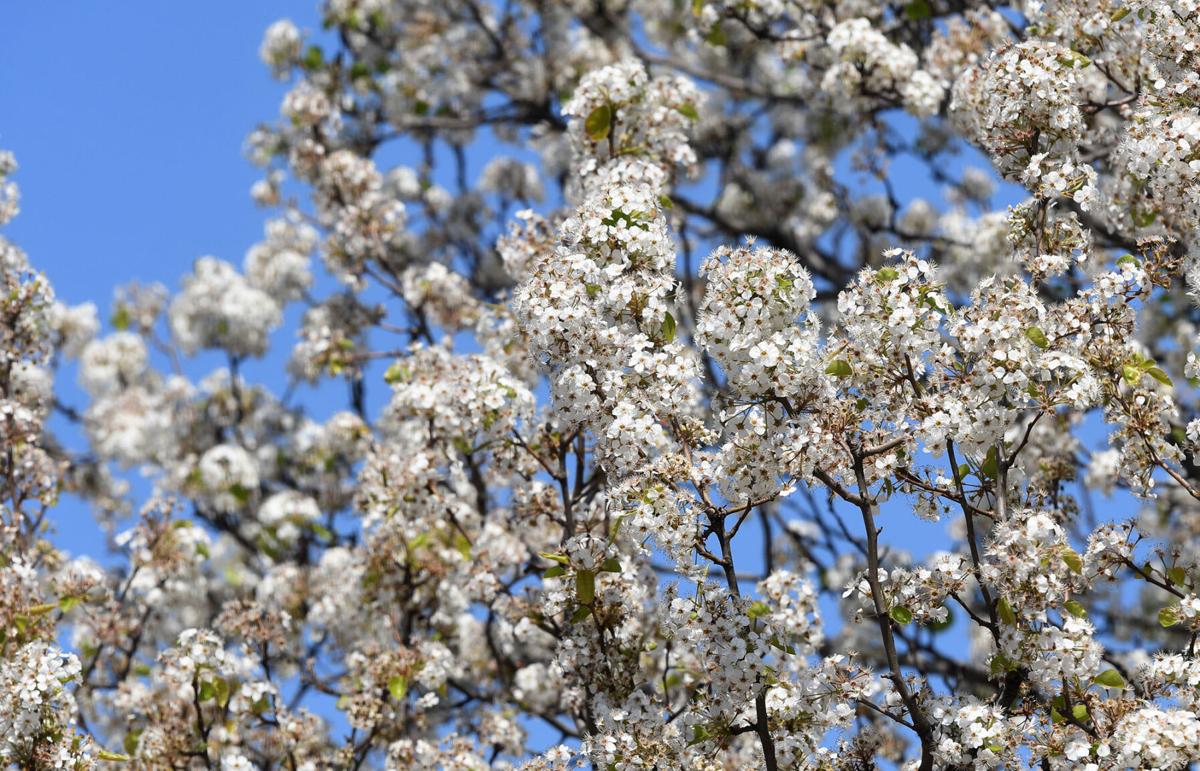 A blooming tree puts on a blossom show over the weekend in Spiva Park in downtown Joplin. GLOBE | LAURIE SISK 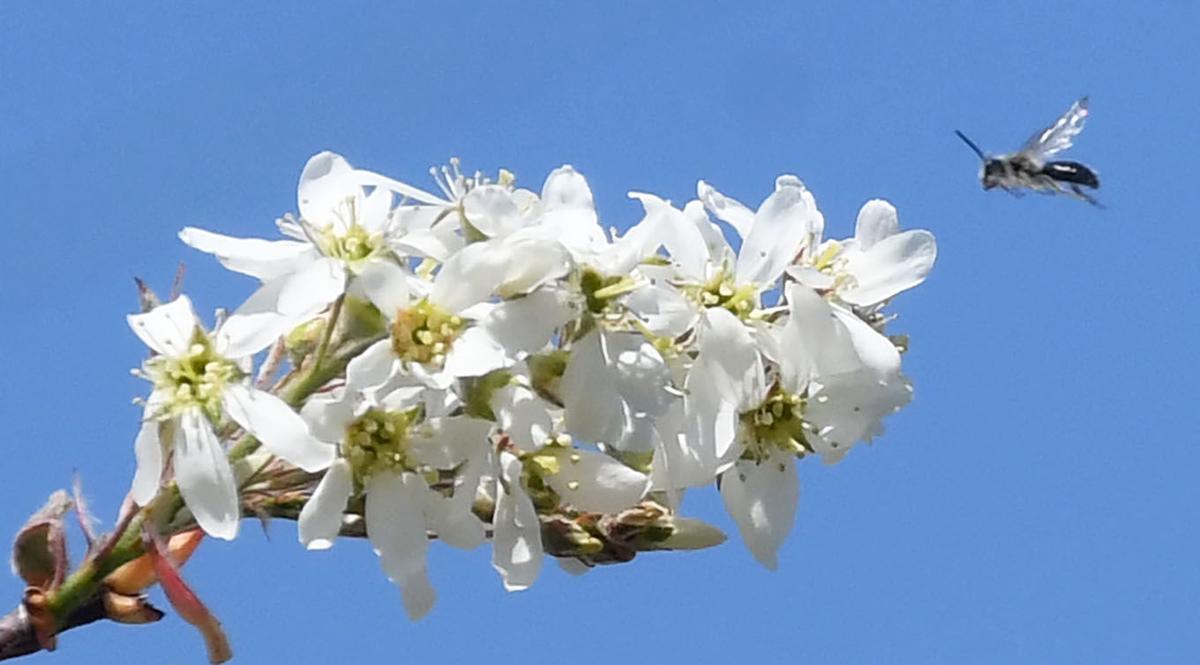 A pollinator flies above the blooms of a flowering tree on Saturday at Landreth Park in Joplin. GLOBE | LAURIE SISK

A row of Bradford pear trees stands out against a blue sky over Main Street in downtown Joplin. The ornamental trees, which were planted many years ago, are now known to be invasive and have been blacklisted by many environmental and conservation groups. GLOBE | LAURIE SISK

A blooming tree puts on a blossom show over the weekend in Spiva Park in downtown Joplin. GLOBE | LAURIE SISK

A pollinator flies above the blooms of a flowering tree on Saturday at Landreth Park in Joplin. GLOBE | LAURIE SISK

The Missouri Department of Conservation is once again asking the public to stop the spread of Callery pear trees and plant alternatives instead.

Also known as the Bradford pear, the Callery pear tree is an invasive species known to crowd out Missouri’s native plants. It’s been a popular landscaping tree for decades, and cultivated forms have spread throughout the state.

Abundant clusters of five-petaled, white flowers emerge in late March and April before leaf out. Round, small, olive-brown fruits appear from May to July, according to the department.

“Callery pears have been a tree many people have enjoyed for years,” said Ann Koenig, a community forester with the department, in a statement. “However, besides the fact that these trees often break apart in storms, and that they have foul-smelling flowers, it turns out these trees are spreading throughout fields and forests, causing problems in our more natural areas. We are excited to work with our partners to provide great, native trees to those who are ready to replace them.”

“They’ve been listed as an invasive species by the MDC, so when you make that hot list, I’m out,” she said.

Jessie Ballard, a naturalist with the Missouri Department of Conservation, said Bradford pears originated in China and arrived in the U.S. in the early 1900s because people wanted a pear tree to cross with Missouri’s native or European pear trees and improve disease resistance.

“They thought at first they’re going to be self-sterile, and they won’t have to worry about them spreading into our native environment,” Ballard said. “Unfortunately, with other cultivars that were being established, it allowed them to cross-pollinate and continue to thrive into our natives. A lot of people, especially around this time of year, want to know more about them and why we’re encouraging people not to plant them.”

Ballard said although Bradford pears are beautiful and fast-growing, the invasive species can form dense thickets and outcompete the state’s native trees. Because it leafs out before other native trees, it can also shade out spring wildflowers in forested settings. It is also structurally weak, making the limbs prone to breaking from wind, ice and snow.

“If you have Bradford pears, we encourage people to get rid of them and plant something that would be a Missouri native, like dogwoods,” Ballard said. “These trees can be cut down, and the stump can be treated with a variety of herbicides. If it’s a small tree, you can wait until it’s rained a lot and the soil’s soft, then you can pull up those trees. Make sure you get all of the root ball out with them because they can propagate again from that root system.”

Effective herbicides include glyphosate and triclopyr at a 25% to 50% solution. Less labor-intensive control options include basal bark treatment and girdling. Mature trees can be girdled during the spring and summer, by cutting through the bark around the entire trunk 6 inches above the ground.

Eastern redbuds and Missouri’s state tree, the flowering dogwood, are good alternatives to Callery pears. The redbud tree grows quickly with lavender flowers in the spring. Dogwoods do best in shady areas and can be somewhat difficult to grow.

“Dogwoods are beautiful and can live in many different areas,” Ballard said. “It’s a long-lived tree, and it doesn’t get very big. If people are looking for other native plants to put in their yard, they can also grow an eastern redbud, which can grow quickly with beautiful buds in the springtime. Both the flowering dogwood and the eastern redbud provide great places for wildlife to live and increase pollinators.”

Serviceberry has petals that are brighter white, strap-shaped, wavy and with spaces between them. Native plums have stamens that are longer than the petals. Apple and crabapple flowers have a slightly pink hue, and apple tree branches are nearer to horizontal and less uniform compared with the vertical, symmetrical branching of Callery pear trees.

Ozark Nursery doesn’t sell dogwoods, but it offers a variety of native alternatives.

“We do offer serviceberries,” Navarro said. “They have a white bloom and put out an actual edible berry. It’s more native rather than a hybrid. For something that looks like a Bradford pear, the serviceberry is your best bet. It blooms light and has that same kind of shape.”

Paul Bloomberg, director of the Joplin Parks and Recreation Department, said Bradford pears are not on the city’s approved tree list. The department makes tree selections based on a list of approved trees authored by the Joplin Tree Board, which was established in 2008.

“The city doesn’t like to plant them because they’re invasive, and it’s not a good, reliable tree,” Bloomberg said. “The only place that we do have them is downtown, and I think that was prior to the city tree board being formed. We call them the Bradford menace. This year’s theme for an Earth/Arbor Day event in October is the Bradford menace.”