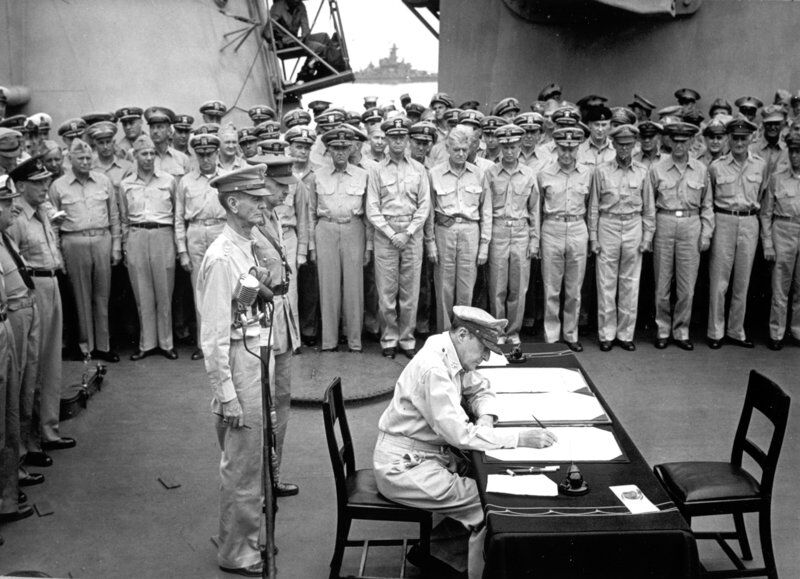 Gen. Douglas MacArthur signs the Japanese surrender documents on Sept. 2, 1945, aboard the USS Missouri in Tokyo Bay. Standing behind him are Lt. Gen. Jonathan Wainwright (left foreground), who surrendered Bataan to the Japanese, and British Lt. Gen. A. E. Percival, who surrendered Singapore, as they witness with other American and British officers the ceremony marking the end of World War II. AP FILE 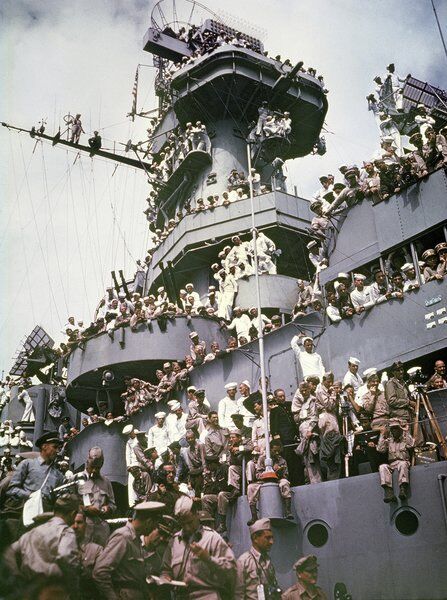 Servicemen, reporters and photographers perch on the USS Missouri on Sept. 2, 1945, for the onboard ceremony in which Japan surrendered in Tokyo Bay, ending World War II. AP FILE 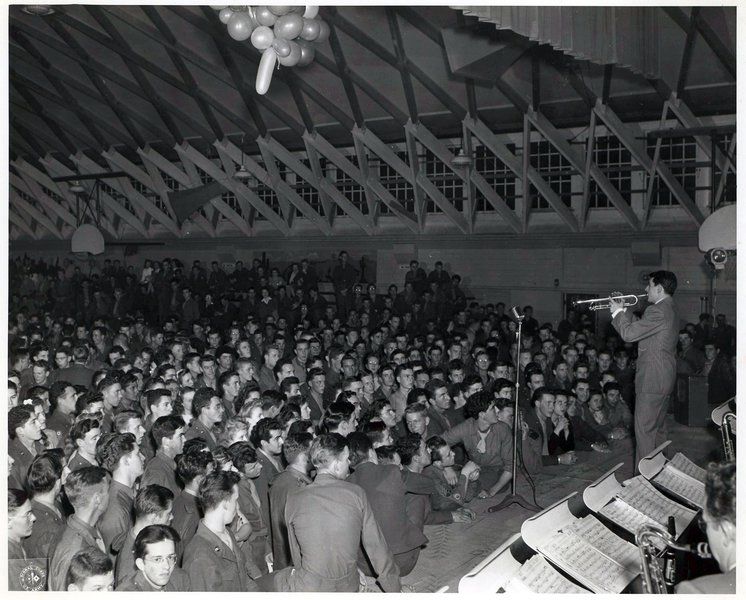 Trumpeter Ray Anthony and his Ray Anthony Orchestra played for soldiers at the field house at Camp Crowder on April 23, 1946. Anthony had been a member of Glenn Miller’s band before joining the U.S. Navy in 1942. After the war, he formed the Ray Anthony Orchestra. Later hits from the 1950s included “The Bunny Hop,” the “Hokey Pokey” and the theme from the TV show “Dragnet.” Today, Anthony at 98 is considered a living legend. 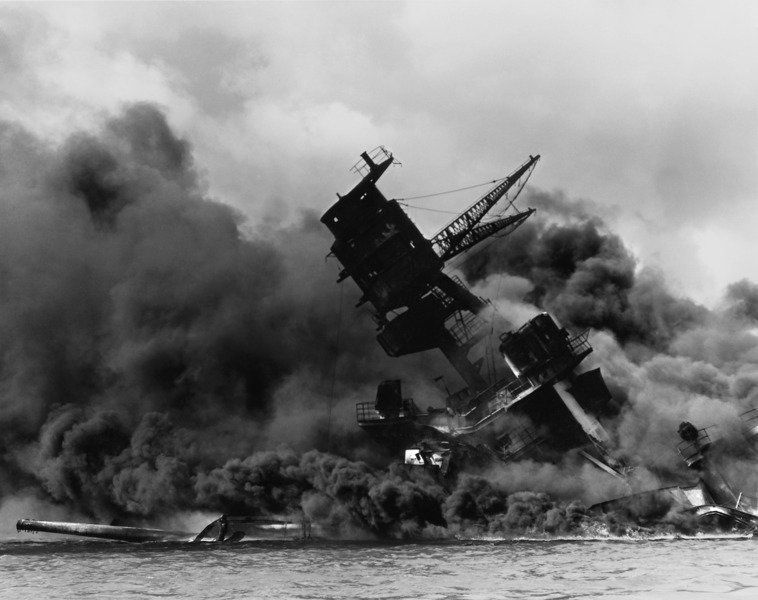 Gen. Douglas MacArthur signs the Japanese surrender documents on Sept. 2, 1945, aboard the USS Missouri in Tokyo Bay. Standing behind him are Lt. Gen. Jonathan Wainwright (left foreground), who surrendered Bataan to the Japanese, and British Lt. Gen. A. E. Percival, who surrendered Singapore, as they witness with other American and British officers the ceremony marking the end of World War II. AP FILE

Servicemen, reporters and photographers perch on the USS Missouri on Sept. 2, 1945, for the onboard ceremony in which Japan surrendered in Tokyo Bay, ending World War II. AP FILE

Trumpeter Ray Anthony and his Ray Anthony Orchestra played for soldiers at the field house at Camp Crowder on April 23, 1946. Anthony had been a member of Glenn Miller’s band before joining the U.S. Navy in 1942. After the war, he formed the Ray Anthony Orchestra. Later hits from the 1950s included “The Bunny Hop,” the “Hokey Pokey” and the theme from the TV show “Dragnet.” Today, Anthony at 98 is considered a living legend.

The most amazing thing about The Joplin Globe’s World War II coverage was just how young they were — those Joplin men called to serve on both fronts.

Raymond Scott was only 18 when he was killed in action in the South Pacific.

Don Bridges was just 19 when he was killed in action in France.

Clark Hardesty was 20 when he died of wounds received at Biak.

Someone at the Globe had the foresight to preserve every story of the men from Joplin who died in that war. The pages are yellowed and brittle nearly 80 years later, but remain legible after being pasted on graph paper and stored in a folder. They tell a story of ordinary men caught up in extraordinary events.

Elton Wright worked for the DuPont Powder Co. in Joplin. He was killed in action in Germany in 1945. He was the third war casualty and second fatality that family suffered.

R.J. Frankenstein went from playing center on the Joplin High School football team in 1941 and serving as mayor for the annual senior class City Day to joining the paratroopers in 1942. He was killed in action in Belgium in 1945.

And James Lockhart was a Joplin firefighter who was killed in action while serving on an aircraft carrier in the Pacific.

They say newspapers are the first draft of history. That being the case, the Globe tells a compelling story of the biggest event of the 20th century, launched with a special edition that came out after the attack on Pearl Harbor, on Sunday, Dec. 7, 1941. Written with more patriotism than precision, however, that edition contained a headline: “Reports indicate America has won the first battle,” based on the reports that were coming in that afternoon.

A Globe photographer and reporter were up early the next morning, when a line formed early outside the recruiting office, and they photographed and interviewed Lloyd Tillock. He and a friend, Harold Whaley, both of Sarcoxie, were the first two men to sign up. Tillock would go on to serve aboard the “Willie P,” as they called it, a transport ship that served in both the Atlantic and Pacific. As the 50th anniversary of the war approached, Tillock was still living in the area, and was one of hundreds of veterans over the next four years who told the story of their service to the Globe.

Throughout the war, AP correspondents kept up the reporting from the fronts, including a reunion held by several Joplin men who learned about each other while stationed on Guadalcanal.

The dispatches also told of the death of Alfred Akers. Orphaned at age 8, with no next of kin, he spent most of his life fending for himself. When war broke out, he was working at the Milford Miller Produce Co., living in a room nearby. No one thought Akers would make a good soldier. He had long ago dropped out of school. The dispatches reported later that Akers even had trouble staying in step after he enlisted. “Wilder than a new beer,” his fellow soldiers said of him. But in combat, the self-reliant Akers proved a born leader, rising to sergeant in the U.S. Army. Twice wounded, he received the Purple Heart with Oak Leaf Cluster, Bronze Star, Silver Star and numerous other honors. He was killed in Italy in 1945. Throughout the war, he had been sending his savings to a contact in Joplin, who gave the money — at Akers’ instruction should something happen to him — to the local orphans.

The Globe was busy on the home front, too, writing about Camp Crowder, rationing and attempts to round up any Japanese who lived in the area.

The paper itself also was the subject of a war story. On April 1, 1945, The Joplin Globe told a story about three U.S. soldiers — none of them local — who had reached an unidentified town overlooking the Roer River. In the attic of a home there they found a copy of the Globe, dated May 28, 1905. They mailed it to the Globe.

“Donated to the citizens of Joplin by the 29th Infantry Division,” their letter stated.

It was unclear to them how a copy of the Globe printed 40 years earlier and on another continent ended up in that German attic, but the Globe noted that the 1905 edition contained a lengthy obituary of Margaret Zelleken, who was born in Germany in 1844, immigrated to the United States and married Edward Zelleken, whose Queen Anne home at 406 S. Sergeant is one of those now being restored. Her maiden name was Grome, which was the original name for a building at 506 S. Main St. that Edward Zelleken built.

The 1905 paper was in such good condition that the Globe in 1945 was able to reproduce the upper half of that front page.

“Parenthetically,” the story also noted, “some weeks ago another American doughboy on the other side of the world in this global war wrote that he found a copy of The Globe in the humble hut of a native on Leyte, in the Philippines. Proof, we think, that The Globe gets around.”

It went on that way for nearly four years — reports of the tragedies, beginning with the attack on Pearl Harbor and continuing through the surrender of Japan in September of 1945.

The News Herald put out a special edition, too, this one on April 12, 1945, the day President Franklin Roosevelt died and a Southwest Missouri man became president.

“Truman’s vice presidential staff stood around his offices in the Senate office building, their faces pale, as though they had had been stunned by the unexpected news which lifted the former Missouri farm boy into the highest office in this nation’s giving.”

The Globe also was there the night Joplin erupted in bedlam, with the surrender of Japan. VJ Day is recognized in August — the announcement of Japan’s surrender was made Aug. 15, but it was still Aug. 14 in the United States.

“Last night’s bedlam was touched off by President Truman’s announcement. ... Within a matter of minutes, carloads of wildly cheering celebrators headed for the business district, and the lid was off,” the Globe reported.

“Joplin staged a noisy and tumultuous celebration,” the newspaper said. The crowd that gathered downtown that night was estimated at several thousand. The celebration included gunfire from a group trying to shoot out lights, and a stray shot struck and killed a Webb City woman who was visiting her parents in Joplin. A Camp Crowder soldier in Springfield also died “of injuries apparently suffered during the VJ celebration,” the paper reported.

At the height of the revelry, Hideki Tojo, a Japanese general and prime minister for much of the war, was hanged in effigy at Fourth and Main streets.

The next day, Aug. 15, was set aside for something different, the Globe reported — for thanksgiving and a remembrance of the cost, and the Globe and News Herald were there too. Businesses and mines closed while churches opened, with many people participating in services throughout the city, organized by the Joplin Ministerial Alliance.

“Many of the churchgoers were relatives of soldiers wounded, captured or killed during the war. Some stood with tears in their eyes as they prayed,” the Joplin News Herald reported.

The paper also had access to some of the veterans when they returned home.

James Harutun, who had worked for the Globe at one point before the war, told his story to the paper in late 1945.

The same day that Japan surrendered, Sept. 2, 1945, Harutun witnessed Gen. Tomoyuki Yamashita — the Malaysian Tiger — turn himself over to U.S. authorities near Kiangan, in the Philippines. Harutun, who had been in the Pacific for more than two years, had taken part in the New Guinea campaign and was among those men of the 6th Division sent ashore as the invasion of Luzon began.

“Of one thing I am certain: Yamashita would have fought until he was destroyed, if Japan had not surrendered.”

Yamashita, who would be executed in 1946 for war crimes, carried his saber in his hand as he approached but was without a sidearm, Harutun recalled.

“Yamashita was neither sad nor jovial. He smiled slightly as several pictures were taken. He had a pleasant face, really, and reminded me of a kindly old man. In fact, I had difficulty tying him up with the trail of murder behind him.”

Harutun said, “Having the (Japanese) surrender is something I had often wondered if I would ever live to see. I will never forget that party walking down the road to us this morning. I felt that we had taken part in an event seldom witnessed in history.”