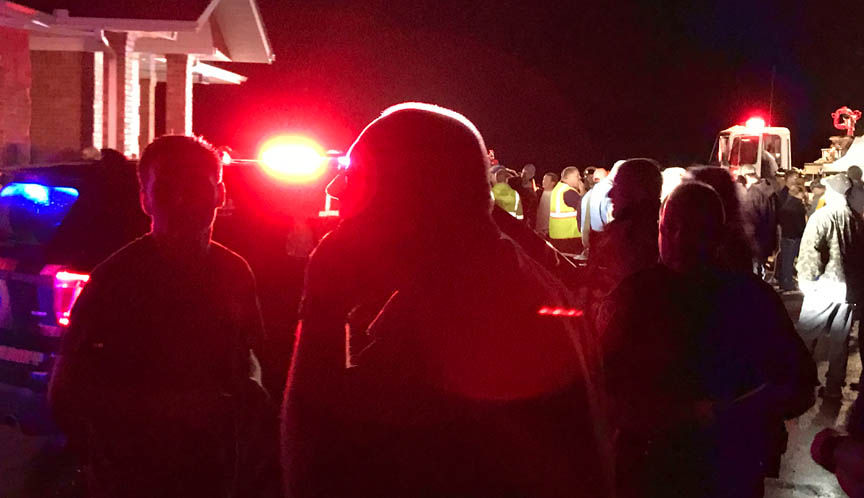 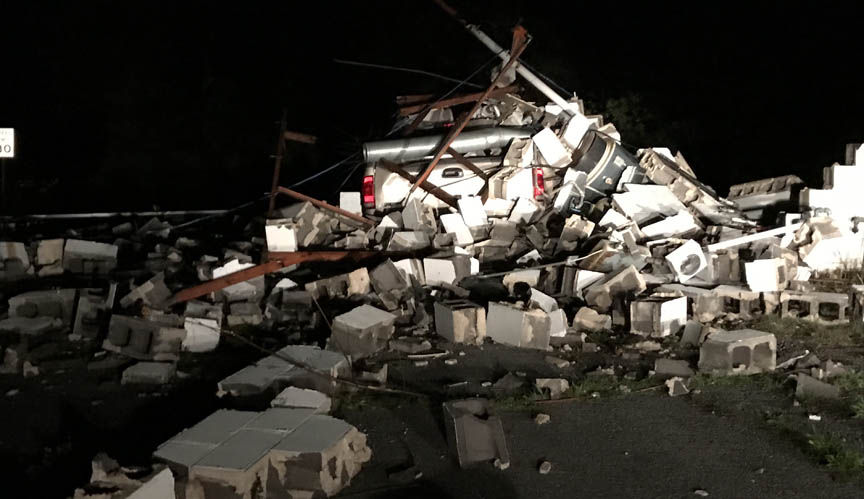 A Ford truck can be seen under the debris of a former car wash on private property in Goodman. 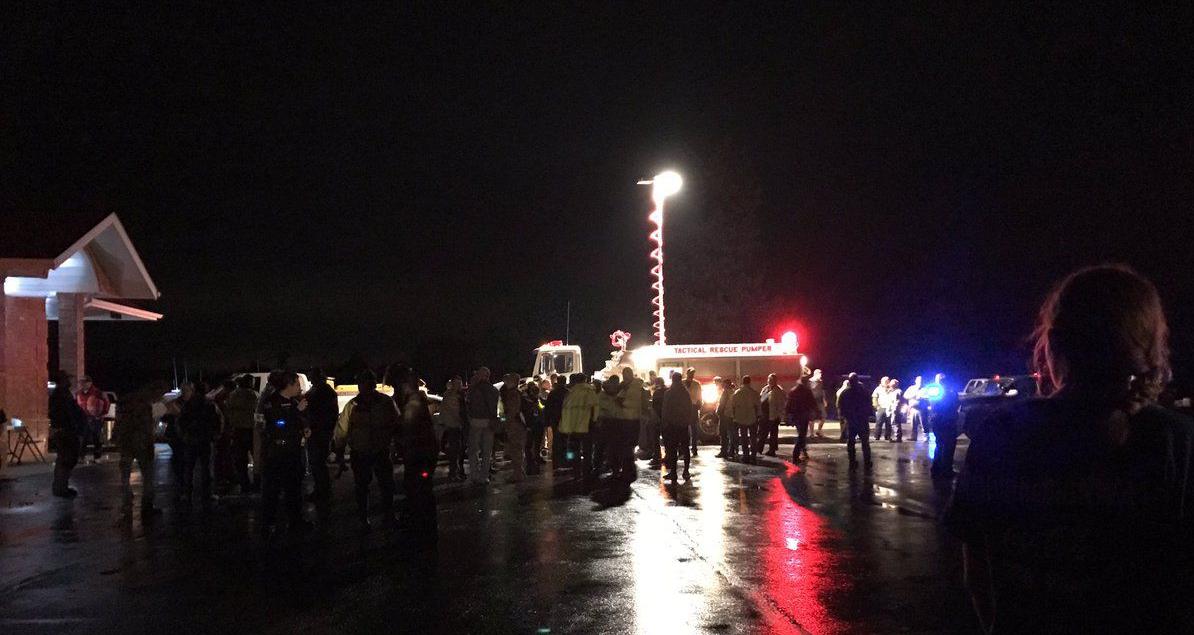 An emergency command post has been set up at Cornerstone Bank in Goodman by the McDonald County Emergency Management Agency. 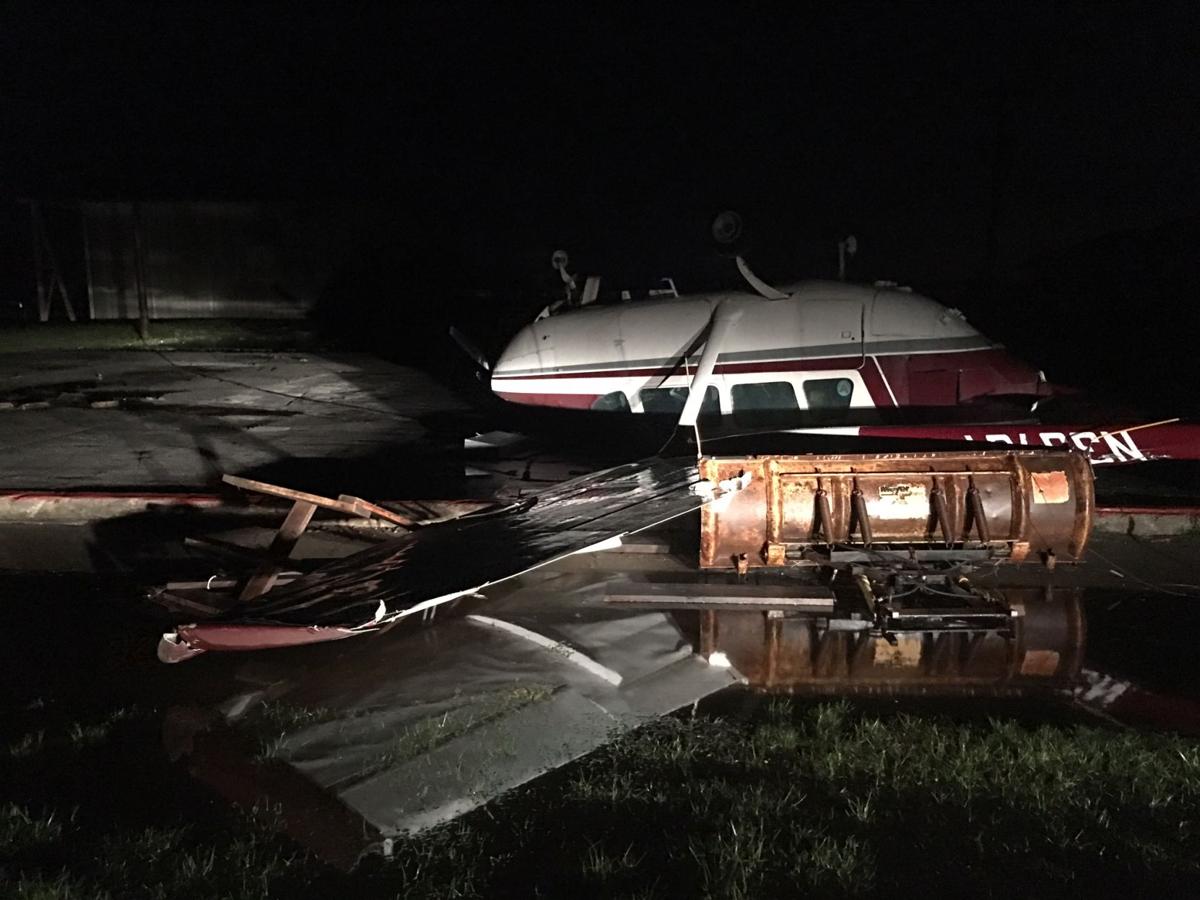 An overturned plane is shown at the Hugh Robinson Memorial Airport in Neosho.

A Ford truck can be seen under the debris of a former car wash on private property in Goodman.

An emergency command post has been set up at Cornerstone Bank in Goodman by the McDonald County Emergency Management Agency.

An overturned plane is shown at the Hugh Robinson Memorial Airport in Neosho.

GOODMAN, Mo. — A storm that hit Goodman Tuesday evening caused extensive damage, including to the elementary school and a fire station. Minor damage also was reported at the Neosho airport and near Washburn.

"It appears as though we had a tornado touch down here on the west side of Goodman and pretty much traveled northeast across part of the city. ... So far we have been lucky. We haven't had any major injuries or fatalities reported," said Gregg Sweeten, McDonald County Emergency Management director. "Goodman Fire Department and Goodman Elementary suffered significant damage, as well as numerous other homes and businesses in the town."

Chris Jennings, Newton County Sheriff, also said there were no reports of fatalities there.

"They do have two injuries," he said of reports coming from emergency workers in the Goodman area.

Jennings said at 9 p.m. the injuries he has received information on were not serious, but reports were still coming in.

Deana Bunch and her daughter, Dakota, came to Goodman to check on Deana's mother and other family members.

"She was in her house. She didn't have time to get to the cellar. My sister was with her, at least. She's 78. She's shaken but she's OK.

"They had planted trees, 23 trees, one for each grandchild as they were born, and every one of them is wiped out. But mom's OK. Sister is OK. Everything else is replaceable."

On its Facebook page, the school district confirmed that a custodian was in the elementary school when it was hit, but took cover and was not injured. Neosho has canceled school across all campuses for Wednesday.

Meghan Sprenkle, co-owner of Goodman Tire and Auto, said Tuesday night, "We just barely missed it by probably a quarter of a mile. We were very lucky."

She said she was watching the news with her husband and heard reports of a tornado and came to Goodman to check on their shop.

"It took off the roof a nearby apartment complex and there are probably hundreds of people in that complex," Sprenkle added.

At 9:30 p.m., Sweeten said the first search-and-rescue sweep of the town had been completed and a secondary sweep was underway. Power lines were down around town as emergency responders were assessing damage.

Sweeten also said an emergency shelter had been set up at the New-Mac Community Room in Anderson because there was residential damage. People were being transported there as needed, and relatives were being asked to go to Anderson, not Goodman.

Shortly after 8 p.m., McDonald County Emergency Management officials announced that the town of Goodman was closed to anyone who wasn't local and they were advising folks to stay away.

The Empire District Electric Co. also reported that more than 7,700 customers had been impacted as of around 9 p.m. most of them in southern Newton and McDonald counties, although smaller isolated outages also are being reported around the region. That number was down to 4,900 by 10 p.m.

"We do have some transmission poles down right now. We are trying to get an assessment," said Julie Maus, Empire spokesperson.

Megan Terry, a meteorologist with the National Weather Service in Springfield said all the reports they received Tuesday night indicate it was a tornado that struck Goodman, and that a survey team would be in the community today. She said they also received reports of tree damage in Granby and Neosho, and reports of damage to poultry barns and a residence in the Washburn area in Barry County.

This report has been updated with more information.

Donnie Ray Phelps Sr. of Joplin, Missouri, passed from this life on April 10, 2021 at his daughter's home in Baxter Springs, Kansas, he was 78. Don was born on September 29, 1942 in Quinter, Kansas to Cecil B. and Edith (Miley) Phelps. After graduating from Quinter High School in 1961, Don r…