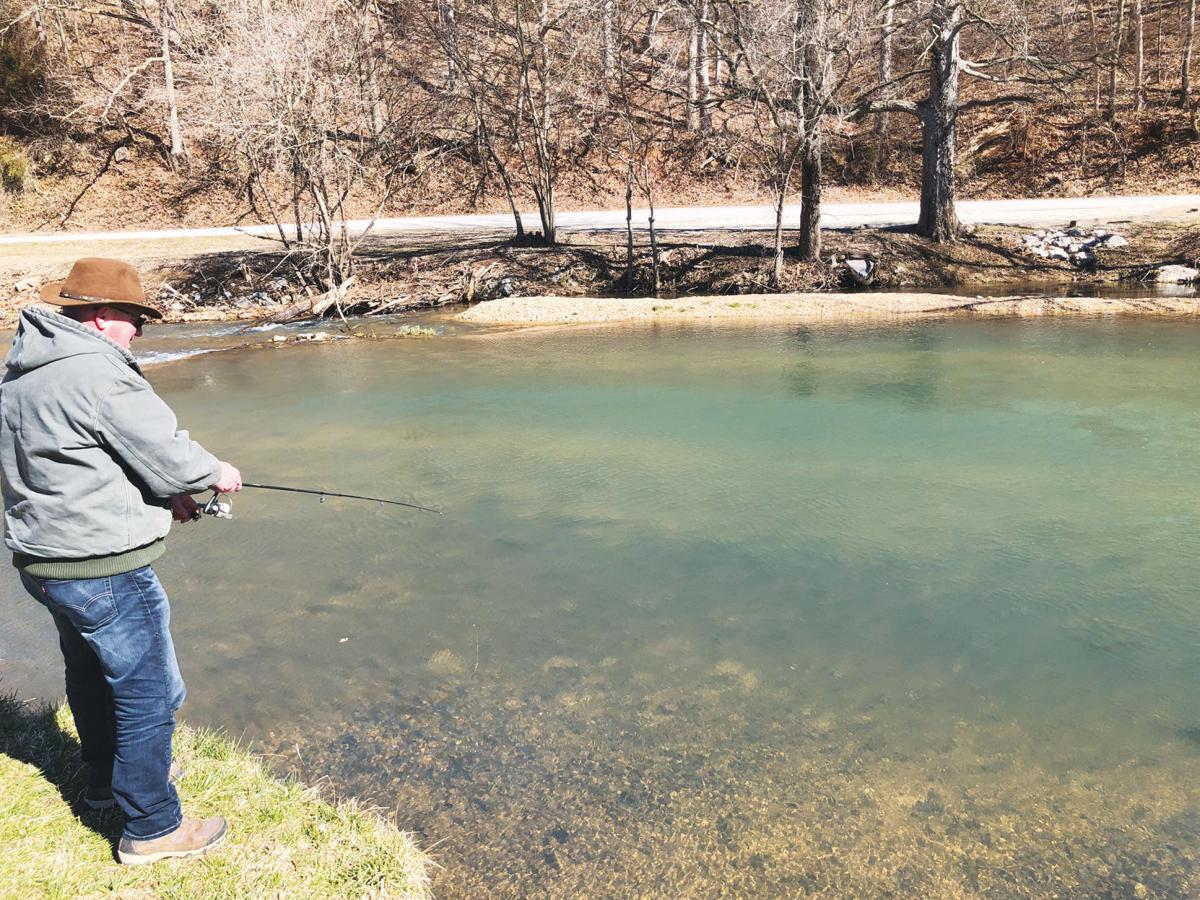 Clint Dalbom tries his hand at trout fishing in Hickory Creek during a chilly February morning. Dalbom, parks superintendent for the city of Neosho, has plans to turn the creek into a destination for trout anglers.Globe/Andy Ostmeyer 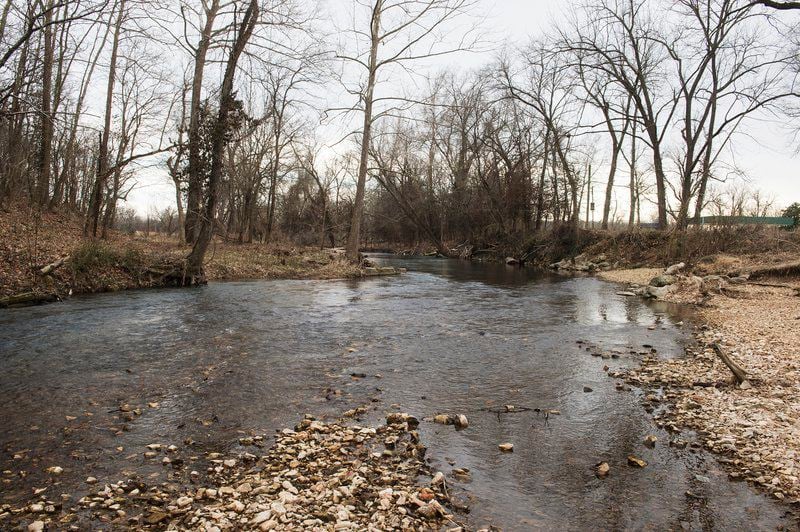 Hickory Creek, in Neosho, is the only white ribbon trout stream in Missouri that runs through a city of any size.Globe | Roger Nomer

Clint Dalbom tries his hand at trout fishing in Hickory Creek during a chilly February morning. Dalbom, parks superintendent for the city of Neosho, has plans to turn the creek into a destination for trout anglers.Globe/Andy Ostmeyer

Hickory Creek, in Neosho, is the only white ribbon trout stream in Missouri that runs through a city of any size.Globe | Roger Nomer

NEOSHO, Mo. — Although there are more than 20 trout streams in the state, none is quite like Hickory Creek.

"It's probably the only urban trout stream in Missouri," said Rick Horton, fisheries management biologist with the Missouri Department of Conservation.

By that, he means that Hickory Creek is the only White Ribbon trout stream in Missouri that flows through a town of any size — in this case the city of Neosho, with more than 12,000 people. This Ozark stream, fed by numerous springs, is within a short walk of the square, of schools, of the courthouse and much more. It may be the only town in Missouri in which a person could slip out of the office at noon, catch his limit over the lunch hour and be back for a 1 p.m. meeting.

Come next Sunday, thousands of anglers will line up elbow to elbow and shoulder to shoulder along the banks of Roaring River south of Cassville, kicking off catch-and-keep trout season in the state. As one of Missouri's four trout parks, Roaring River is a gem, no doubt, and this opener will be an event. Because it is on a Sunday, it promises to be big if the weather cooperates. The number of anglers will be in the thousands.

Clint Dalbom is inviting some of those anglers to try something different this March 1: Kick off the opener along Hickory Creek. He plans to fire a starter pistol at 6:30 a.m., just as officials do at Roaring River State Park. If it's cold enough, he'll light up a fire barrel or two, just like in the park. He'll also open the nearby Lampo Center as a place where people can warm up, get coffee and use the restrooms.

"I would like to have a trout opener here that would be like Roaring River," he said. "We just want to create an event."

"Come try your luck — in downtown Neosho," he added.

Dalbom is on to something here.

Roaring River, for all its virtues, is often crowded, and not just on opening day but on just about every weekend and most summer mornings. There have been times when I had stretches of Roaring River to myself, but it was usually raining.

Meanwhile, there are alternatives. A few years ago, more out of curiosity than anything else, I went to Capps Creek on opening day. It is another of Missouri's White Ribbon trout streams, also in Newton County, and while the action wasn't as hot, I had the place to myself. And a few times, in order to escape the crowd at Roaring River State Park, I've dropped downstream to fish that stretch of river below the park but above Table Rock Lake. Roaring River below the park is another of Missouri's White Ribbon streams. When I did that this past summer, I had a stretch of river to myself and plenty of action to keep me busy in the afternoon.

The point is that there are alternatives to Roaring River State Park, and Dalbom — who is parks superintendent for the city of Neosho — wants anglers to know that and to know about the alternative flowing through his city. On a recent February day, he and Kenny Balls, park supervisor, couldn't help but imagine the possibilities for Hickory Creek.

"We want people to realize what they have here," Balls said.

Morse Park, which is on Hickory Creek, already has a paved walking trail and other features, and the city is pushing forward with the initial phase of a plan that includes miles of single track and a mountain biking skills loop in the park. But Dalbom believes Neosho has something unique in Hickory Creek, it being the only community of any size with a trout stream running through it. He also wonders if the stream has kayaking potential when the water is up.

Neosho is an example of something other communities should be doing: turning classic Ozark streams that flow through them back into assets and advocating for them rather than letting them collapse into litter-strewn eyesores.

Missouri, by the way, has nine White Ribbon trout streams, as well as a handful of Red Ribbon and nine Blue Ribbon streams, the latter including Crane Creek in Lawrence and Stone counties, but none of these runs through a city of any size. About 2.7 miles of Hickory Creek through Neosho, from Missouri Highway 86 to near its confluence with Shoal Creek, are stocked five times a year with rainbows, said Horton.

Here are the rules:

• Only flies and artificial lures may be used during that time, and soft plastic baits and natural and scented baits are prohibited when fishing for any species from Nov. 1 through Feb. 28.

• From March 1 to Oct. 31, the limit is four trout daily, just like Roaring River.

• Unlike Roaring River, where anglers have to buy a daily tag, trout fishing at Hickory Creek requires an annual trout permit, which costs $7 per adult, as well as a fishing license.

Trout are not native to Missouri but were first stocked in the late 19th century. Since then, it has become a big business — with some natural reproduction in many of these streams today. About 1.5 million more browns and rainbows are stocked annually in the state, about half of those in trout parks, according to the Missouri Department of Conservation. It's become a $180 million business in the state.

I spend some of those dollars every year, and I'll add Hickory Creek to the mix of places I'll fish this spring. I may not be able to get there and back in a lunch hour, but I'll bet I could hit it early in a morning and get to work that day before anyone is the wiser.

There's one more thing working in Hickory Creek's favor — a bonus for anglers, if you will.

Paul Dean Hutson, 65, of Joplin, Missouri, passed away August 27, 2020. He was born March 21, 1955, in Kansas City, Kansas, to Paul and Maydell Hutson. He was preceded in death by his son, Anthony Paul Hutson, a sister, Kathy Culp, a brother-in-law, Rick Culp, and his parents, Paul Eugene an…

MONETT, MO - Rhonda Plummer, 56, a homemaker, passed away Tuesday, October 20, 2020. A celebration of life will be held at a later date. Arrangements are under the direction of Ozark Memorial Park Crematory, Joplin.