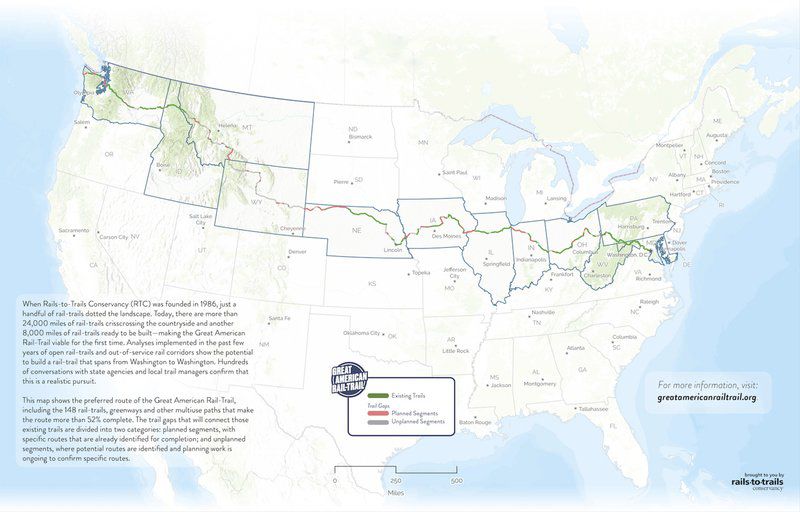 The proposed coast-to-coast Great American Rail-Trail will go north of Missouri and Kansas, but there may be options that would allow these states to connect their existing trail networks to it.courtesy | Rails-to-Trails Conservancy 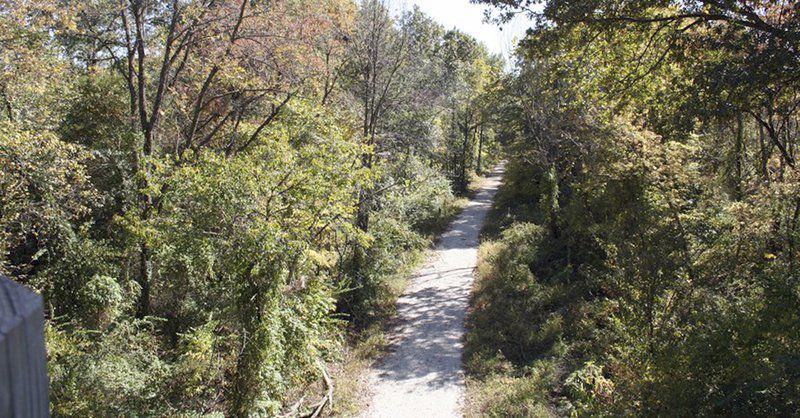 The proposed coast-to-coast Great American Rail-Trail will go north of Missouri and Kansas, but there may be options that would allow these states to connect their existing trail networks to it.courtesy | Rails-to-Trails Conservancy

How do Missouri and Kansas connect to one of the biggest things happening in trails?

Better yet, how can the rest of the country connect to big trail things happening in Missouri and Kansas?

I spoke with Eric Oberg, Midwest director of the national Rails-to-Trails Conservancy, and Brent Hugh, executive director of the Missouri Bicycle and Pedestrian Federation, about that. They had some thoughts. More in just a second.

First, those big things happening in Missouri and Kansas:

• Last year, the Missouri Department of Natural Resources signed an agreement with the Missouri Central Railroad Co. to preserve for ultimate development the 144-mile Rock Island corridor between Windsor and Beaufort. When combined with the 240-mile Katy Trail State Park and other existing and planned connectors, Missouri will eventually have 400 miles or more of a loop linking St. Louis and Kansas City, with routes on both the north and south sides of the Missouri River. Springfield, St. Joseph and several other Missouri cities have already indicated they want to find ways to tie into this network. That will be important for the big picture.

• In Kansas, work is underway to finish Flint Hills Trail State Park (117 miles), the Landon Trail to Topeka (nearly 40 miles) and a proposed route from Baldwin City to Ottawa (14 miles), where there are connections to the already finished Prairie Spirit and Southwind trails (60 miles). Baldwin City gets it pretty close to Overland Park and its easy to see the day coming when these two state networks will link up in the Kansas City area, creating maybe 700 miles of riding that will give Missouri and Kansas bragging rights to one of the major cycling draws in the country.

While both states already have their plates piled heapin’ high, here I wander along and wonder: How do we go even bigger yet?

Which brings me to the biggest thing happening in trails nationally and my conversations with Oberg and Hugh.

Not far to the north of the Missouri-Iowa line — 60 miles as the crow files at its closest point — a cross-country multiuse trail is planned, called the Great American Rail-Trail. More than half of it — about 1,900 of 3,700 miles — is complete. It’s already possible to cycle from Washington, D.C., to Pittsburgh, for example, and only some small gaps prevent cycling from Seattle to Montana.

The national Rails-to-Trails Conservancy held an event earlier this month updating the project, which has raised more than $14 million in public and private money for planning, design and trail construction since the concept was unveiled last year. And in that year, another 40 miles were completed, and another 100 miles are in the pipeline to be added. Such things happen slowly, but they are happening.

The Great American is great news, the only downside (for us) being that its planners chose to cross Iowa rather than Missouri.

Oberg and Hugh had some thoughts on creating a “Midwest option,” for the Great American, but both said that what is being built in Missouri and Kansas will be “world class” in its own right, even if it never gets connected.

Both mentioned talk over the years of some sort of Mississippi River Trail, which could conceivably one day connect St. Louis with the Great American, where it will cross the Mississippi at the Quad Cities. Another option Oberg suggested might be to tap into trails being developed in Illinois, pushing from St. Louis toward Springfield and from there possibly northward to the Great American, which will head due west out of Chicago and follow canals to the Quad Cities.

I suggested two routes both thought could be viable:

• North out of Kansas City to Iowa: St. Joseph has already said one of its major transportation goals is a multiuse trail connection to the Katy/Rock Island network. Could one possibility be a link from St. Joe to Blanchard, Iowa, on the Missouri line? Blanchard is the southern terminus of the Wabash Trace Nature Trail. It runs to Council Bluffs, where it would hit the Great American.

Hugh mentioned an alternative: north from St. Joe along the west side of the Missouri River. The Steamboat Trace Trail, 22 miles of which exist in Nebraska, could be a foundation for that possible connector. However, a big stretch of that has been damaged by flooding, and the trail is currently closed.

• West through Kansas and then north to Lincoln, Neb.: Once the Kansas and Missouri trail networks are linked, a rider could leave St. Louis and get to Topeka. If a connection could be built between Topeka and Marysville, Kansas — perhaps along the Kansas River and Big Blue/Tuttle Creek — the rest already exists.

Still, I wonder about trail possibilities. Guess I always have. I spent part of my childhood not far from Marysville, and one of my earliest jobs was tending the grounds and buildings at a re-created Western fort/frontier town that the owner advertised as being on the Oregon and California trails. We mowed. We tarred roofs on the general store and the always leaky old jail. He also kept a small herd of bison on the property, and we put up hay for them in the summer and fed them in winter. We also fought the occasional wind-whipped grass fire before it did any real damage.

I used to wonder what it was like moving out onto one of those historic trails, following it to the end.

Imagine the possibilities today, including a kid hopping on a trail in Southeast Kansas or in Southwest Missouri and one day pedaling to Puget Sound or the Potomac, taking in places as diverse as Yellowstone National Park and the skyscrapers of Chicago, along with a thousand other great American stories waiting to be told.

Andy Ostmeyer is the editor of The Joplin Globe. His email address is aostmeyer@joplinglobe.com.

The Rails-toTrails Coalition also talked recently about a recent economic impact study that found that “the nation’s trail economy generates more than $34.1 billion annually and could grow to more than $138.5 billion each year as the connectivity of trails and active transportation routes improve.”

Spend a sunny spring day on Joplin’s Frisco Greenway or Jasper County’s Ruby Jack, looking at the money spent on bikes and running shoes and more, and you won’t doubt that. Spend any day — sunny or otherwise — on Northwest Arkansas’ Razorback Greenway, tied as it is to bike shops, restaurants and more, and you’ll wonder if the numbers are too low.