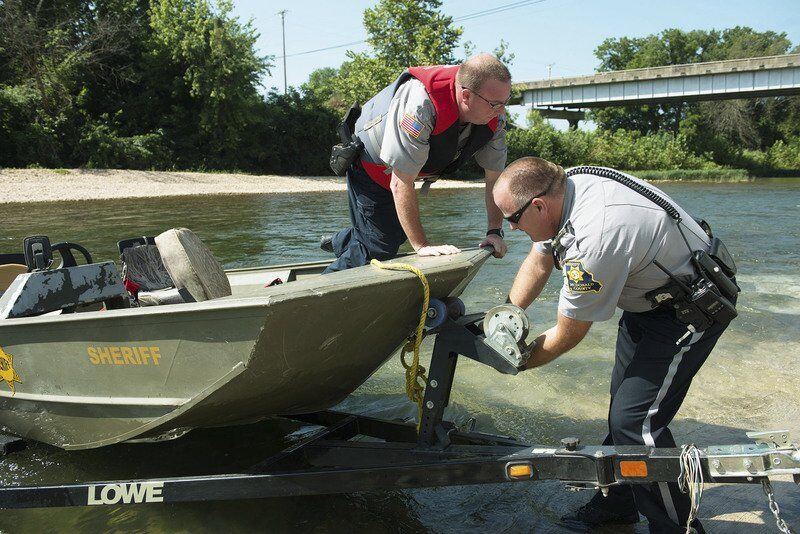 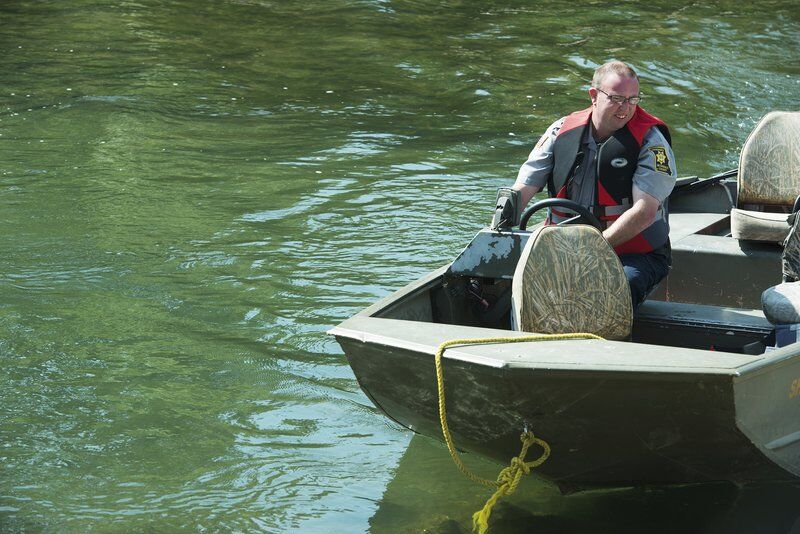 McDonald County Sheriff Michael Hall has been patrolling Elk River for many years. Over the Memorial Day weekend, he and others participated in 21 water rescues.Globe/Roger Nomer 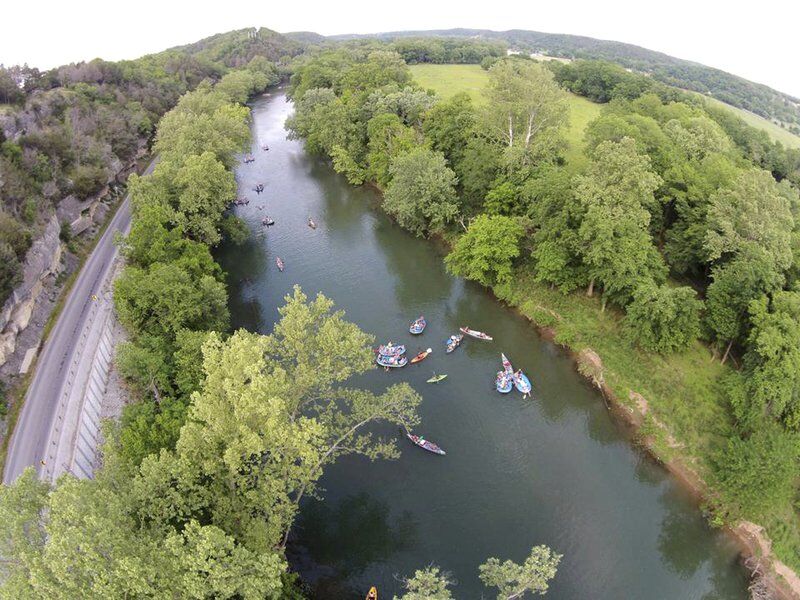 The Elk River in McDonald County is a popular float stream, but can become perilous in high water. Courtesy | Missouri Department of Tourism

McDonald County Sheriff Michael Hall has been patrolling Elk River for many years. Over the Memorial Day weekend, he and others participated in 21 water rescues.Globe/Roger Nomer

The Elk River in McDonald County is a popular float stream, but can become perilous in high water. Courtesy | Missouri Department of Tourism

Given what happened over Memorial Day weekend in McDonald County, now is a good time to step back and ask: How did it happen? How do we keep it from happening again?

There were 21 water rescues over the holiday weekend, conducted by the sheriff's department, the Noel and Pineville fire departments, the Missouri State Water Patrol, and in at least one instance, with help from good Samaritans.

On Monday — Memorial Day — two adult floaters were thrown from a canoe after it hit a bridge pier. A child who also was in that canoe became trapped between the canoe and the bridge and, according to witnesses, may have been underwater for as long as three minutes. Bystanders jumped in and helped free the child, who was then taken to a hospital in serious condition. According to Facebook posts, the child is recovering.

There also was one drowning, on Saturday, of an Arkansas resident.

I spoke with Michael Hall, McDonald County sheriff; Brandon Barrett, Noel fire chief; and Pat Tinsley, who operates Big Elk Campground, in Pineville, and wondered: What are the takeaways here? I also spoke with Jason Schaumann about weather and water.

Hall noted that the lone fatality that weekend was not wearing a life jacket.

That's not uncommon but always dangerous. Barrett and Tinsley remarked on the number of times floaters use their life jackets to tie canoes together.

• Takeaway No. 1: Think of life jackets like bicycle helmets in that they take some getting used to but once that happens you don't feel uncomfortable wearing one but uncomfortable when not wearing one, as if something is amiss.

I expected Hall and Barrett to tell me alcohol was a factor, but both said it wasn't, and that was probably because of the fact that the river was up from recent rain and moving so fast that, as Hall said, "there was not enough time to get drunk." A float that Hall said normally takes four to six hours was done in half that time.

I also asked if concession businesses were putting people on the river in dangerous conditions, but they all agreed that that was not the case. Concession operators have a lot of money wrapped up in their boats, and putting them in during high water is a sure way to tear up that investment. Putting people on in high water is also a good way for a river to get a bad reputation, which is bad for business.

"Most of them weren't putting in canoes on the day we had the rescues," Hall told me, adding that some of the rescues occurred with people who brought their own canoes.

Tinsley told me that he personally made a lot of floaters mad when he told them the river was too high to put his boats on He also told me he has helped recover bodies in the past, and that image remains with him when making decisions.

"Our goal is zero deaths," he said.

Tinsley also said that he helped over the Memorial Day weekend with five rescues, and four involved people who launched their owns boats — not rented boats.

He said Big Elk has a "red light, yellow light, green light" guidance for floaters and added even those using their own boats can call him — 417-355-6037 — for guidance. He added that he also would like to see signs up at public accesses that warn people when the river is getting too high for safe floating.

Ultimately, whether renting or bringing your own canoe or kayak, it's the paddler's responsibility to know when something is beyond the limit of their skills and to say, "Not today."

Hall said he thought the biggest problem over the Memorial Day weekend was "inexperience on the riverway."

To borrow a phrase from my friend Wally Kennedy, paddler extraordinaire, too many people think of rivers, particularly those like the Elk, as "amusement parks." Yet anyone who has ever been in swift water knows that rivers are meandering muscles than go from benign to beast quickly.

The Elk and its main tributaries, Big Sugar and Indian Creek, are popular float streams, and generally a safe outing for families. But every river changes quickly with rain, of which we have had aplenty this spring. Last year, Joplin came close to breaking its record for annual rainfall, and this year, we're on the same track. When high water and crowds hit on the same weekend, the result is what Hall called "the perfect storm." Trees and other debris wash in with higher water, creating new root wads that can entangle floaters and swimmers, and the channel shifts, too.

Schaumann, with the National Weather Service, said too many people look at the sky, see it blue and cloudless, and think, "Let's go," when what they need to check instead are river levels, offered in real time and online at https://www.weather.gov/sgf/ and at https://waterdata.usgs.gov/mo/nwis/rt.

And people either forget — or don't understand — that Southwest Missouri has some of the wooliest and most volatile weather in the nation. Remember the duck boat tragedy at Table Rock Lake? I tuned in to the hearings by the National Transportation Safety Board last month as it was preparing to issue its final report on that accident, and officials noted something interesting about our weather: "Missouri," according to testimony from one of the NTSB board members, "out of all the states and the District of Columbia ranks consistently third in the nation to seventh in the nation for most weather reports."

The Globe earlier this spring reported that the National Weather Service station in Springfield in 2019 issued 115 tornado warnings within its 37-county area. It was enough activity to earn us a top-three spot among the more than 120 weather stations around the country. The Springfield station also issued 122 flash flood warnings; again, third-highest in the nation.

Both the National Weather Service and the U.S. Geological Survey track the Elk River crest and streamflow at Tiff City, near the Oklahoma line, and their reports note something interesting. Dare I say alarming.

Records at Tiff City go back 80 years, but three of the worst four floods on record and five of the worst 10, have all been in the past decade. Some experts say that more frequent rainfall and more intense rainfall is occurring in the Midwest as a result of global warming. Others think development is a culprit. Whatever the cause, similar record flooding in the past decade or so is being recorded on rivers around the Ozarks, including those where gage and streamflow data go back a century, or in one case, to the 1890s.

Tinsley, who has worked at Big Elk for more than 40 years, said more pavement is leading to more runoff, also contributing to more destructive flooding, and noted that last year, in a 33-day period, there were three floods and that sometimes a 2-inch rain can bring the river up several feet.

Whether climate change, development or most likely both, the tragedy would be that we start to see more weekends on Ozark rivers like the one we just had.

Andy Ostmeyer is editor of The Joplin Globe.