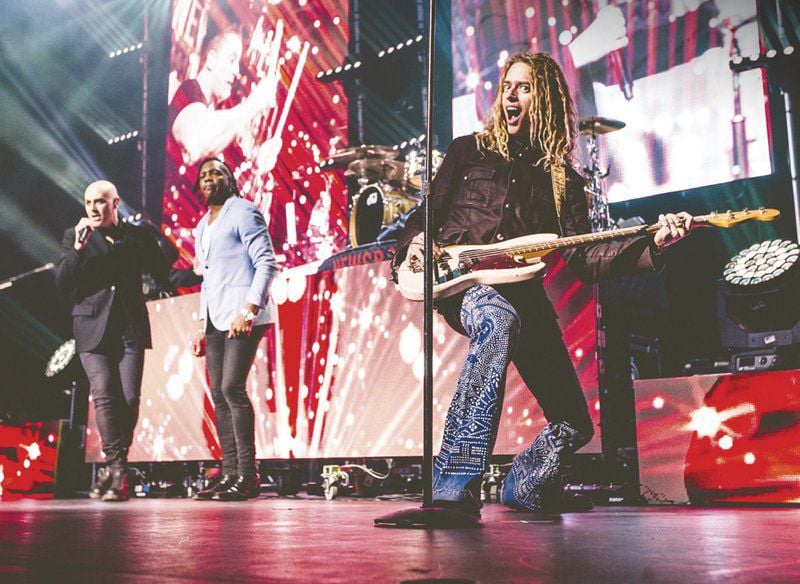 About 2,000 people are expected to turn out for the highly anticipated visit of a popular international Christian band hailing from Down Under.

Newsboys, a six-member band that formed in 1985 in Queensland, Australia, is slowly making its way across North America on their “Greatness of Our God” tour. They’ll make a one-night stop at Joplin’s Memorial Hall, 212 Eighth St., for a 7 p.m. concert on Saturday.

Tickets are on sale now.

It’s a bit of a new era for the band, having David, Phillips, Frankenstein and Tait reunited on stage with Furler and Joel, two previous members “retired” from the band years ago to pursue other musical endeavors. The band right now is a blending of the old with the new. The band’s latest album, “United,” debuted at No. 1 earlier this year.

“Putting Michael, Duncan, Jody and Jeff back together with Peter and Phil is among the highlights of my career managing the Newsboys, since first discovering them in Australia in 1986,” said Newsboys manager Wes Campbell to Business Insider.

The concert is hosted by Calvary Baptist Church of Joplin. Normally, because of the church’s ability to comfortably seat 1,600 people, concerts are held on the grounds at 600 E. 50th Street. Past concerts have showcased the talents of Toby Mac, John Crist, Mercy Me and Jeremy Camp. However, Newsboys is a bit of a different creature altogether.

“In this case, the Newsboys needed at least 2,000 seats, so it was a bit larger than we could fit in the church, so we were fortunate enough to be able to use Memorial Hall,” pastor Kenny Cox said.

The band’s signature hits range from “He Reigns” and “Born Again” to their recent 15-week chart-topper, “We Believe.”

“It is a family show,” Cox said. “Moms and dads grew up listening to old-school Newsboys, when (Furler) was the lead singer, and now their kids are listening to the Newsboys with (Tait) is the lead. That makes for a great evening for the whole family.

“Personally, I’ve seen them probably 30 times live,” Cox continued. “I truly believe they put on the most exciting show in Christian music. Their production is probably the best thing you can see in a live event in this town.”

The band’s primary message, and one millions of fans have embraced over the years, “is they celebrate and set the audience’s attention on God,” Cox said, “who he is, how he has made it possible to enter into a joyful relationship with him through the work of Jesus, and then the transforming impact that relationships has on our lives every day.”

Tickets start out at $23 for balcony seating, $27 for mezzanine and $33 for front-row mezzanine seats.

Upcoming concerts hosted and sponsored by Calvary Baptist Church include:

• Lysa TerKeurst will speak during the annual two-day women’s conference on Friday, Oct. 4 and Saturday, Oct. 5. “This event has really generated a lot of excitement because Lysa has never been to Joplin and she does so few live events.”

• Zach Williams will be in concert on Saturday, Nov. 2, at Calvary Baptist, playing a show that will include new songs such as his recent single, “Rescue Story.”

• Chonda Pierce, a Christian comedian, will perform on Sunday, Nov. 10, at Calvary Baptist.

David Lee McCall, 88, of Joplin, MO, passed away Wednesday, July 1, 2020. David was born January 23, 1932, in Joplin, to the late John and Mabel McCall. David was a veteran of the Korean War and retired Sgt. 1st Class of the U.S. Army Reserves. He also retired from May's Drug, starting his c…