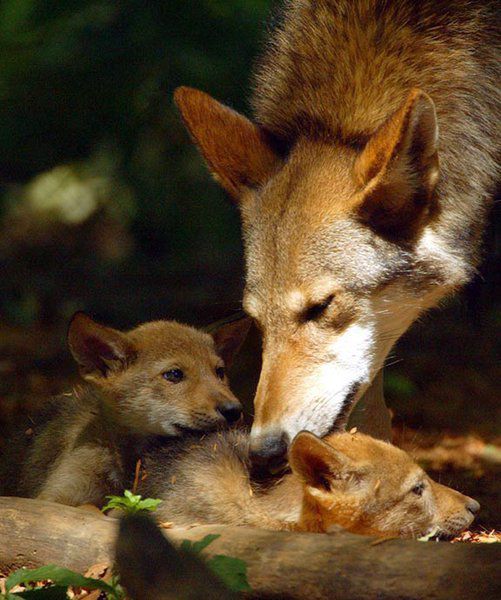 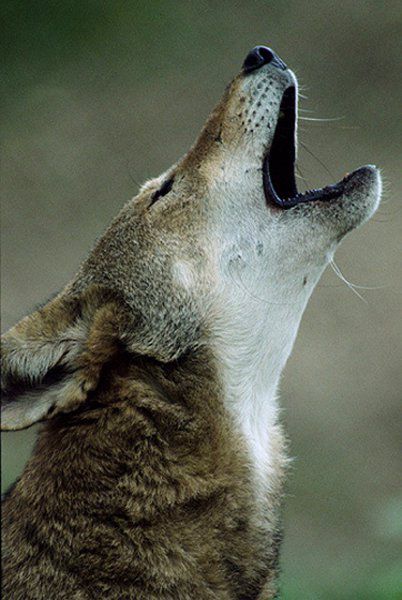 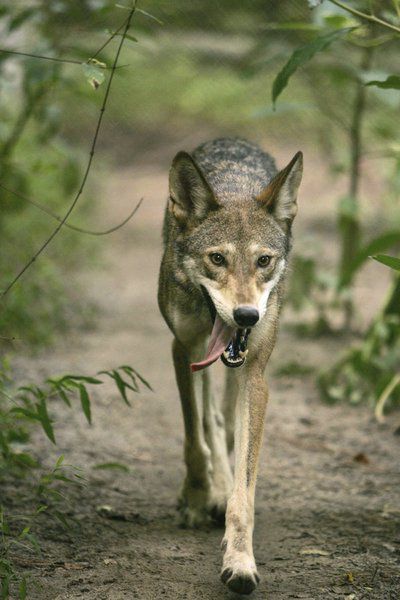 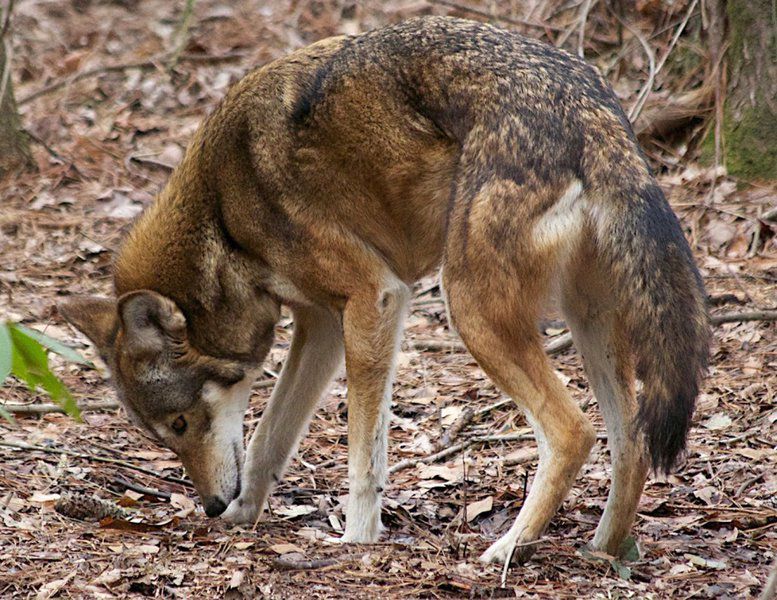 An old Ozarks inhabitant, the red wolf, is down to a few dozen animals hanging on in North Carolina, and its future remains uncertain, even as two scientific conclusions — one recent and the other building throughout the past 20 years — speak in favor of making a last-ditch effort to keep it on the ark.

The red wolf once roamed throughout the Southeastern United States, from the Atlantic and Gulf coasts into Arkansas and southern Missouri. It may be the only wolf unique to the United States. By World War II, it had been wiped out east of the Mississippi River, and only two viable populations existed in the wild: one in the Ozark/Ouachita mountains, the other in parts of Louisiana and Texas. That Ozark population was the next to fall.

Through the 1970s, those last survivors in Louisiana and Texas were removed from the wild and sent to captive breeding programs, and their offspring became the genesis for the U.S. Fish and Wildlife Service recovery effort. Officials ultimately chose a site in eastern North Carolina nearly 30 years ago for red wolf reintroduction.

One critical advantage that region had over other parts of the red wolf’s former range was that its coyote population was “virtually zero at the time,” according to the U.S. Fish and Wildlife Service. However, coyotes, which had continually been expanding eastward, soon moved in. The fear has always been that the few remaining red wolves introduced in the wild would mate with coyotes — particularly if the population was small enough — and that the red wolf would hybridize itself out of existence.

However, a new study — published just last month in the journal Evolutionary Applications — challenges those assumptions and concluded that “active management and natural isolating mechanisms may be limiting intermixing” in the recovery area.

Sampling scat in 2010, scientists found evidence that “hybrids composed only 4 percent of individuals within this landscape despite co-occurrence of the two species.”

The study’s authors concluded hybridization was infrequent and wrote, “From the red wolf perspective, our results disprove the common perception that red wolves have been consumed by a genetic swarm and no longer exist as a distinct genetic entity in North Carolina. ... This is especially pertinent as the USFWS has been faced with calls to modify or even cancel the red wolf program due to a perceived lack of success.”

The study is one of a number of pieces affirming that the USFWS program in North Carolina worked, despite claims by critics who said the two species were interbreeding.

The finding helps remove a barrier to restoration of the red wolf throughout other parts of its historic range, including, perhaps, the Ozarks, which at least one previous scientific study identified as a possible top candidate for restoration.

The second development — the one building throughout 20 years — is the growing body of evidence concluding that apex predators play a vital role regulating natural communities, a role that man has not been successful in filling. In the absence of large predators, these communities adopt even destructive behaviors.

Did you know that in some areas without large predators to regulate them, raccoons, which are nocturnal, have become daytime feeders, nonchalantly wandering farther and farther away from sheltered areas to feed, their young not even raising their heads to survey their environment anymore for danger?

The most famous laboratory for the impact of the wolf has been Yellowstone, where they were reintroduced in 1995, but it is a bit of a unique environment. A better example for the rest of the country might be studies coming out of Wisconsin, which found that the natural recovery of the gray wolf population there changed the browsing habits of deer in positive ways. Wisconsin, like Missouri and many other states, has a deer population that may even exceed what existed in pre-settlement times. Each wolf only eats an estimated 15 to 18 deer per year, so their impact on the state’s deer population (there are fewer than 1,000 wolves in Wisconsin) is negligible, compared with hunter harvests and even weather patterns.

In the absence of wolves, deer in Wisconsin consume tree seedlings, shrubs and forbs (wildflowers and other leafy plants), avoiding ferns, grasses and sedges, and the result has been a decline in the former, including rare and sensitive species, and an increase in the latter. With wolf recovery, those altered deer browsing habits led to a 70 percent increase on average in the percent of cover of forbs and a 43 percent increase in species richness. There was similarly dramatic increase in seedlings and shrubs and a nearly 50 percent decrease in ferns.

Another study found that in areas of Wisconsin with large wolf populations, the proportion of saplings browsed was lower by 85 percent, sapling height more than doubled, forb species richness doubled and the recruitment of maples was 24 times as high as comparable areas with lower wolf densities.

But there is some evidence that red wolves could have the same kind of top-down pressure in their communities, given that red wolves restored to barrier islands as part of the recovery process aided the sea turtle population by helping control the population of raccoons, which eat sea turtles eggs.

All of this science is happening just as Tara Zuardo argues that the future of the former Ozarks inhabitant has never been more dire. Last summer, the U.S. Fish and Wildlife Service announced a full review of its red wolf program. It said it was not terminating its recovery effort, but it did suspend reintroduction of red wolves into the wild while scientists gathered additional information. The decision still has not been announced but could come later this year.

Zuardo is an attorney for the Animal Welfare Institute, one of seven conservation groups arguing that because of pressure from politicians and some private landowners in the recovery area, that the federal agency is “deliberately abandoning the red wolf program.”

The U.S. Fish and Wildlife Service says no decision has been made, but those conservation groups recently filed an emergency petition demanding increased protection efforts on behalf of the 40 or 50 surviving red wolves believed to still exist in the recovery area of eastern North Carolina.

The conservation groups also want red wolf populations introduced at two other sites to rebuild the population and listed a number of candidates throughout the Southeast that Zuardo says are supported by science. Neither Missouri nor Arkansas were on the list, despite that fact that the Ozarks was among the last known refuges for the animal.

Meanwhile, North Carolina lawmakers recently called on the federal agency to end the red wolf recovery effort in that state, leaving the most endangered canid in the world without a home.

Discontinuing the program could be a hard sell, given that the USFWS has invested millions of dollars in the recovery over decades, and it would be a high-profile failure for an animal whose status as an endangered species predates the Endangered Species Act. Whatever happens, Missouri and Arkansas need to be watching.

The red wolf evolved in tandem with the Ozarks’ rhythm of hill and hollow and oak-hickory forests, and its extirpation from the region surely altered the natural balance. Man-made efforts to find and maintain that balance will remain costly, ineffective and fraught with unintended consequences.

Right now, voices in North Carolina are dominating the debate. Granted, they are on the front lines of the recovery effort, but they are not the only region that could suffer if the red wolf is allowed to become extinct and if a natural mechanism for keeping nature in balance is removed forever.

Aldo Leopold, whose ties to Wisconsin and Missouri are deep, offers a lesson worth remembering: “The last word in ignorance is the man who says of an animal or plant, ‘What good is it?’ If the land mechanism as a whole is good, then every part is good, whether we understand it or not. If the biota, in the course of aeons, has built something we like but do not understand, then who but a fool would discard seemingly useless parts? To keep every cog and wheel is the first precaution of intelligent tinkering.”

Andy Ostmeyer is the metro editor for The Joplin Globe. Contact him at aostmeyer@joplinglobe.com.

In 1950, a small female taken near Branson became the last red wolf on record in Missouri. In 1964, a world authority on wolves, Douglas Pimlot, came to Arkansas to evaluate the status of red wolves. He played recordings of wolf howls around the state and listened for responses. He got two. One was from the far southwest corner of the state, part of that population that still survived in Texas and Louisiana. The other came from the Boston Mountains.

With that, the howl of the red wolf faded from the Ozarks.