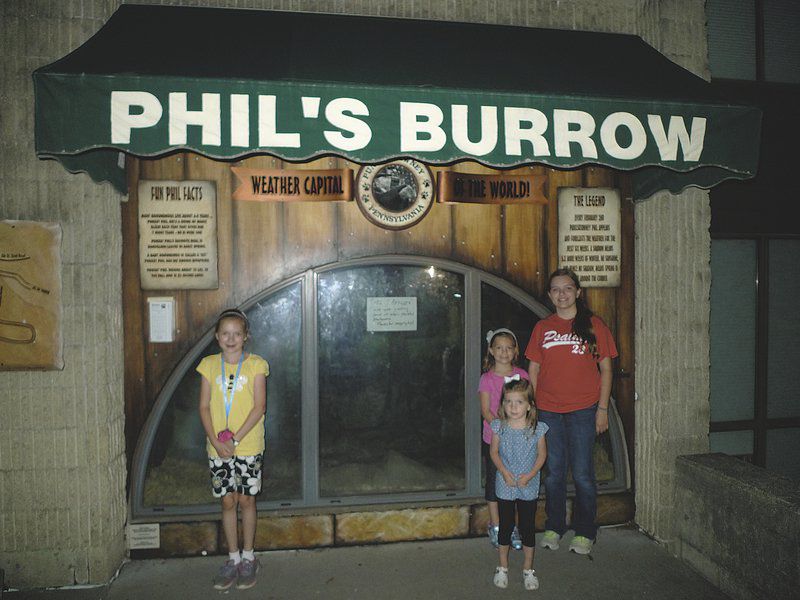 Hope, Grace, Joy and Faith Brittenham pose in front of Phil’s Burrow — where Phil and Phyllis live during the year. Courtesy | Katie Brittenham 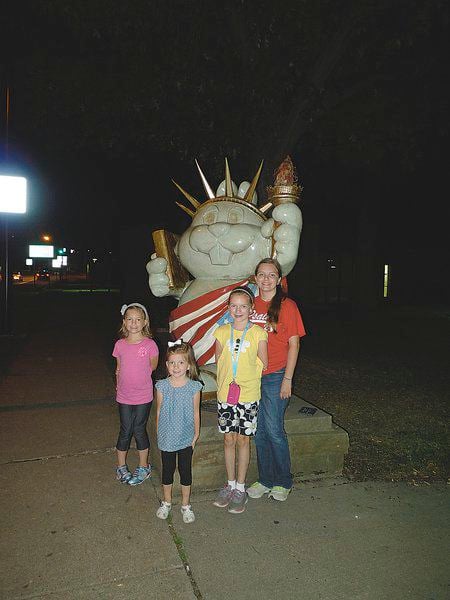 Joy (from left), Grace, Hope and Faith Brittenham pose in front of Freedom Phil, one of the many statues highlighting Punxstawny Phil in his namesake town. Courtesy | Katie Brittenham 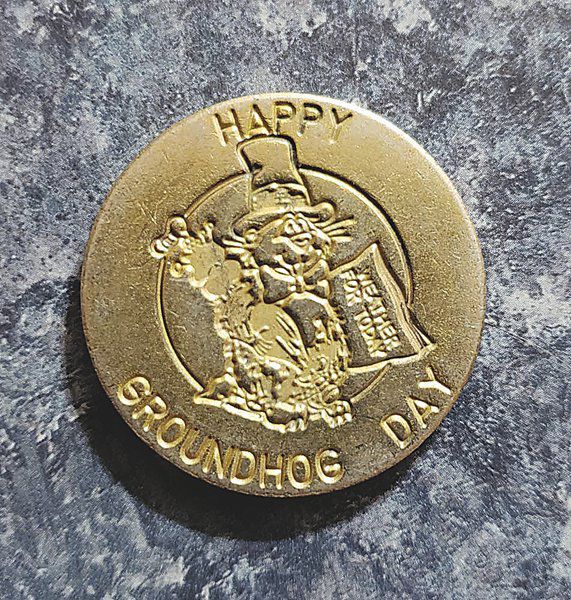 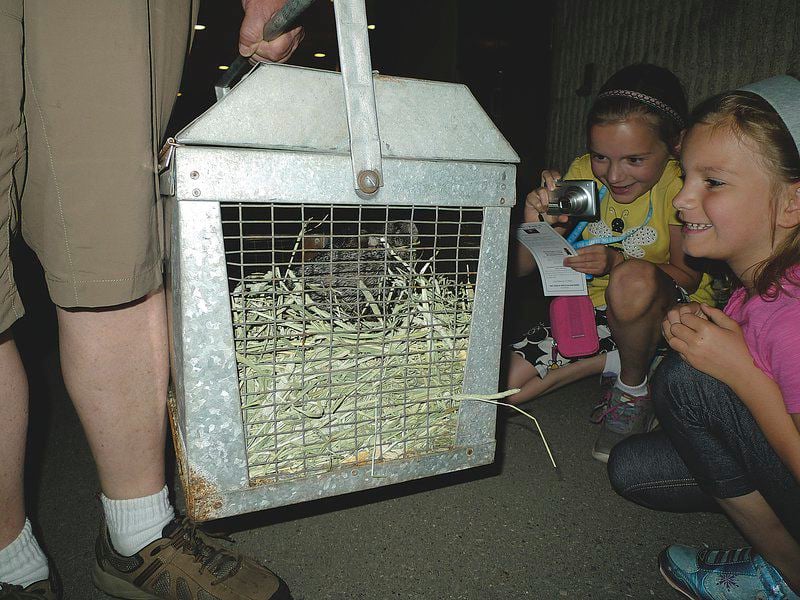 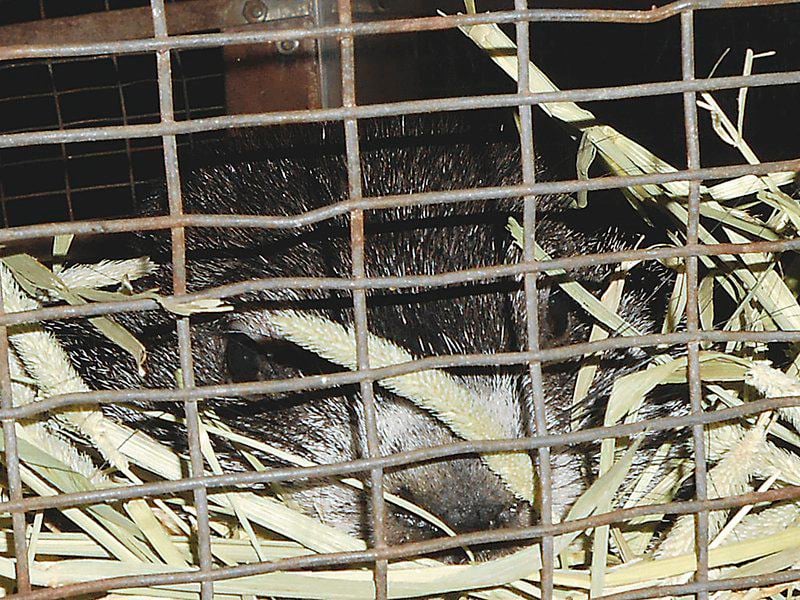 Punxstawny Phyllis peaks from a cage as she returns from being a featured guest at an event. Courtesy|Katie Brittenham

Hope, Grace, Joy and Faith Brittenham pose in front of Phil’s Burrow — where Phil and Phyllis live during the year. Courtesy | Katie Brittenham

Joy (from left), Grace, Hope and Faith Brittenham pose in front of Freedom Phil, one of the many statues highlighting Punxstawny Phil in his namesake town. Courtesy | Katie Brittenham

Punxstawny Phyllis peaks from a cage as she returns from being a featured guest at an event. Courtesy|Katie Brittenham

MONETT, Mo. — This morning, all eyes were on Gobbler’s Knob to see if spring is near, or if the world will be afflicted with six more weeks of winter.

Since 1887, Punxsutawney Phil has used Feb. 2 to give his opinion about all things weather at Gobbler’s Knob in Punxsutawney, Pennsylvania.

Thousands gather on the knob and throughout the small town to share in all things Phil during the days leading up to Groundhog Day, including fireworks, a chance to see Phil deliver his prognostication in person, screenings of the Bill Murray flick bearing the same name and a walking tour of the town.

It’s all centered around Phil’s forecast — to see his shadow and predict six more weeks of winter or to see no shadow, and predict winter is soon to be finished.

The tradition — and a chance to see Phil — drew Katie and Michael Brittenham of Monett to Punxsutawney during one summer vacation.

The family — which includes four daughters: Faith, Hope, Joy and Grace — was traveling to a Free Will Baptist camp in July 2017.

Because family has gone to the camp for the past five years, Katie Brittenham often seeks out different routes to introduce her girls to different sights.

In 2017, the family drove through Michigan and Canada to take in Niagara Falls. Looking through the map at the various stops between the falls and the camp, Brittenham discovered they would travel near Punxsutawney.

“It’s all about the journey for us, the adventure” Brittenham said. “That’s how we ended up there.”

Knowing it was months past Groundhog Day, Brittenham wasn’t sure what the family would find, especially because it would be after 9 p.m. when they passed through the famous town.

The family found a town decorated with a multitude of Phil statues, including Freedom Phil, which portrays the groundhog as the Statue of Liberty. They also found Phil’s Burrow — his specially designed home that allows people to check out the town’s icon.

Brittenham said initially her family was disappointed to find a sign on Phil’s Burrow indicating he was out for an event.

As they were standing there, a man approached them, a small metal cage in his arms.

It turned out to be Butch “Iceman” Philliber — a member of Phil’s Inner Circle carrying not Phil but Phyllis, Phil’s female companion.

Brittenham said Philliber took the time to answer her daughters’ questions about being part of Phil’s Inner Circle and about his furry friend.

He also let the girls have a closeup view of Phyllis — something they would have missed if Phyllis and Phil had been snug in their home.

“(Phyllis) was coming back from an event,” Brittenham said, adding Philliber recounted how people will request Phil/Phylis to attend parades, club meetings, weddings and more.

“It was so interesting, definitely a highlight of our trip,” Brittenham said. “We got a chance to get to know things behind the scenes.”

At the end of their visit, Philliber gave each girl a golden groundhog coin to remember their trip.

Brittenham said the girls still remember the visit and are proud of their commemorative coins.

“We see what they do on television,” Brittenham said. “But meeting him and just hearing about what happens — it’s basically a party all night long.

“We definitely got the inside scoop we wouldn’t have gotten if we hadn’t have shown up when we did. We all agreed it was a highlight of the trip.”

Groundhog Day is closely associated with Candlemas Day, a day when Christians would take their candles to church to have them blessed, thus bringing blessings to the household for the rest of winter.

The event evolved into an English folktale and song that included a bit of weather forecasting, centering upon if the day be fair and bright, or cloudy and rainy.

Eventually the folktale made its way to Germany, and according to German lore, if the hedgehog saw his shadow on Candlemas Day people would have six more weeks of winter or a “second winter.”

The tradition came to the states as people of German ancestry began to immigrate to North America. The first mention of Groundhog Day in Punxsutawney came in 1886, when it appeared in the town’s newspaper. The tradition grew, and it has been marked by locals and visitors alike since Punxsutawney’s Groundhog Club was established in 1887.

Thousands of Phil’s Phans travel to Gobbler’s Knob each year to see what Phil says about the weather. The event, which begins in the early morning hours of Feb. 2, includes a firework celebration at 6:30 a.m.

CARTHAGE, MO - Larry Smith Sr., 77, a groundsman, passed away Friday, February 21, 2020. Services to be held at a later date. Arrangements are under the direction of Ozark Memorial Park Crematory, Joplin, MO.

CARTHAGE, MO - George Hooper, 91, a tool and dye machinist for H.E. Williams, passed away Monday, February 17, 2020. Graveside committal of ashes will be at 1 p.m. Thursday at Greenlawn Cemetery, Jasper, MO.