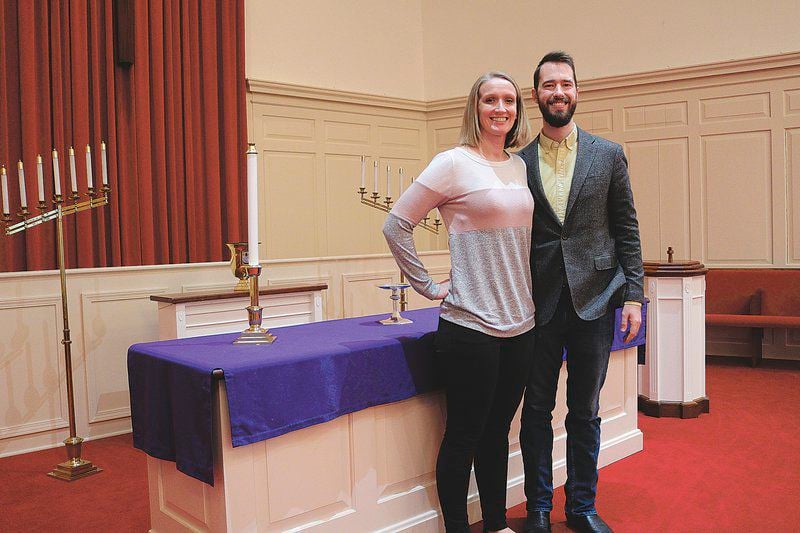 Kira and John Anderson share both ministry and pulpit duties at First Presbyterian Church in Joplin. They oversee a congregation membership of 350. Globe | Kaylea M. Hutson-Miller 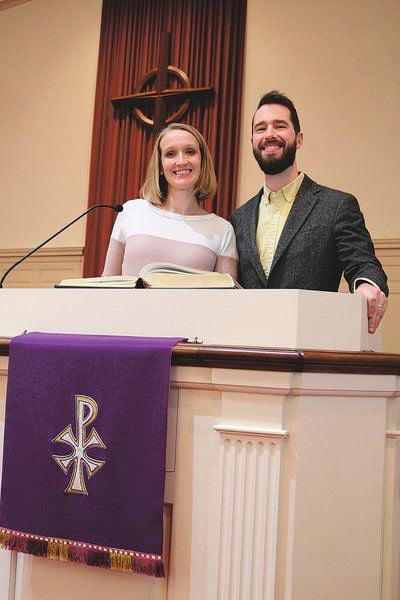 Kira and John Anderson share both ministry and pulpit duties at First Presbyterian Church in Joplin. They oversee a congregation membership of 350. Globe | Kaylea M. Hutson-Miller

With the exception of those who own small businesses, most married couples go their separate ways for work — each with their defined roles.

Kira and John Anderson are different. Together, they make up the new pastoral team at First Presbyterian Church in Joplin.

Each working three-quarter time, their presence gives the congregation the equivalent of a pastor and half to fill what traditionally has been a single-person role.

Sharing the ministry and pulpit as a married couple is becoming more common in mainline Protestant denominations — especially as people, following their respective calls to ministry — meet their future spouses during seminary/graduate school.

The couple, along with their daughter, Kaylee, moved to the Joplin area in late February. They assumed the role as co-pastors at First Presbyterian Church in early March. First Presbyterian has a membership of 350 and belongs to the PCUSA.

Kira and John have spent much of the last month figuring out the various job divisions, along with the church’s response to COVID-19.

Kira handles the administrative side, focusing on personnel and buildings/ground issues, while John focuses on Christian education, pastoral care and missions. They share the pulpit and plan to split their time 50/50 — offering the congregation two voices.

The Andersons will celebrate their fifth anniversary in August 2020. Their daughter, Kaylee, was born on Christmas Day 2018. Both are extroverts — they describe John as “off the chart,” while Kira is a bit more toward the introverted side.

The couple like to camp and hike, saying they may be the only ones to take a 10-month-old hiking in the Grand Tetons. They love board games with more than 30 in their collection. John loves to cook; Kira enjoys gardening.

They hope to get involved in the Joplin community as pastors and as John and Kira.

More about the Andersons

Kira grew up in metro Atlanta. Raised Presbyterian, Kira watched as her mom and other women took leadership roles in the church.

She received her call to ministry as a young girl, during a stint at Camp Cherokee in north Georgia. She got in the car at the end of camp and told her mom she would become a pastor.

After attending Presbyterian College in Clinton, South Carolina, Kira worked as a youth minister for a large United Methodist Church in Birmingham, Alabama. She later attended Princeton Theological Seminary, where she graduated with a Master of Divinity. After seminary, she served at Wellshire Presbyterian Church, a large church in Denver.

John grew up in Springfield. He attended Washington University in St. Louis, pursuing an economics-based degree — following in the footsteps of his older brother.

A religious studies class, taken at the urging of this brother, Joe, opened his eyes to the possibilities of a ministerial career and led him to attend Princeton Theological Seminary. John graduated with a Master of Divinity then served as pastor at a small Presbyterian Church in Milliken, Colorado.

As they began to explore ministry opportunities, the couple created three resumes — one for each, and a third as a clergy couple.

Kira said they hoped to find a church to serve together, jokingly saying she and John “actually really like each other.”

“We’re very different in many ways; we complement each other,” Kira said. “He’s more logical.”

“And she’s more of a dreamer,” John added.

The combined position gives the couple a chance to worship together as a family and give themselves more time with their daughter, along with expanding their ministry skills and service.

“We’re excited about all of the opportunities, to see what we can get done together,” Kira said. “He wants what’s best for me, and I want what’s best for him, and together we want the best for the church.”

John said they were drawn to the Joplin congregation because, rather than center the discussion on what First Presbyterian members did during the 2011 tornado, the congregation spoke about their dreams for ministry and outreach — including developing new relationships with the nearby juvenile center.

“They were very forward thinking and positive,” John said.

Looking ahead, the Andersons are working on their upcoming sermons. While some may focus on the lectionary, others will be built around themes ranging from Mr. Rogers to Dr. Seuss.

As they step into their new roles, the Andersons are looking for ways to not only strengthen their ministries, but also their marriage.

For that, they plan to find a marriage counselor to serve as a third party confidant.

“It’s not that something is wrong,” Kira said, “but it’s more of a preventative medicine. A third party to talk to, to take care of our own relationship. Our marriage is a priority.”

John sees this decision — which was explained to the hiring committee — as a way to normalize mental health discussions.

The Andersons are already dreaming about how they can connect with the families who have children attending the church’s child care facility. When Kaylee is 2, she’ll join the program.

Other dreams concern the church’s retreat center near Diamond, known as Shoal Kirk. The 100-acre facility includes a possible wedding venue, along with camping options.