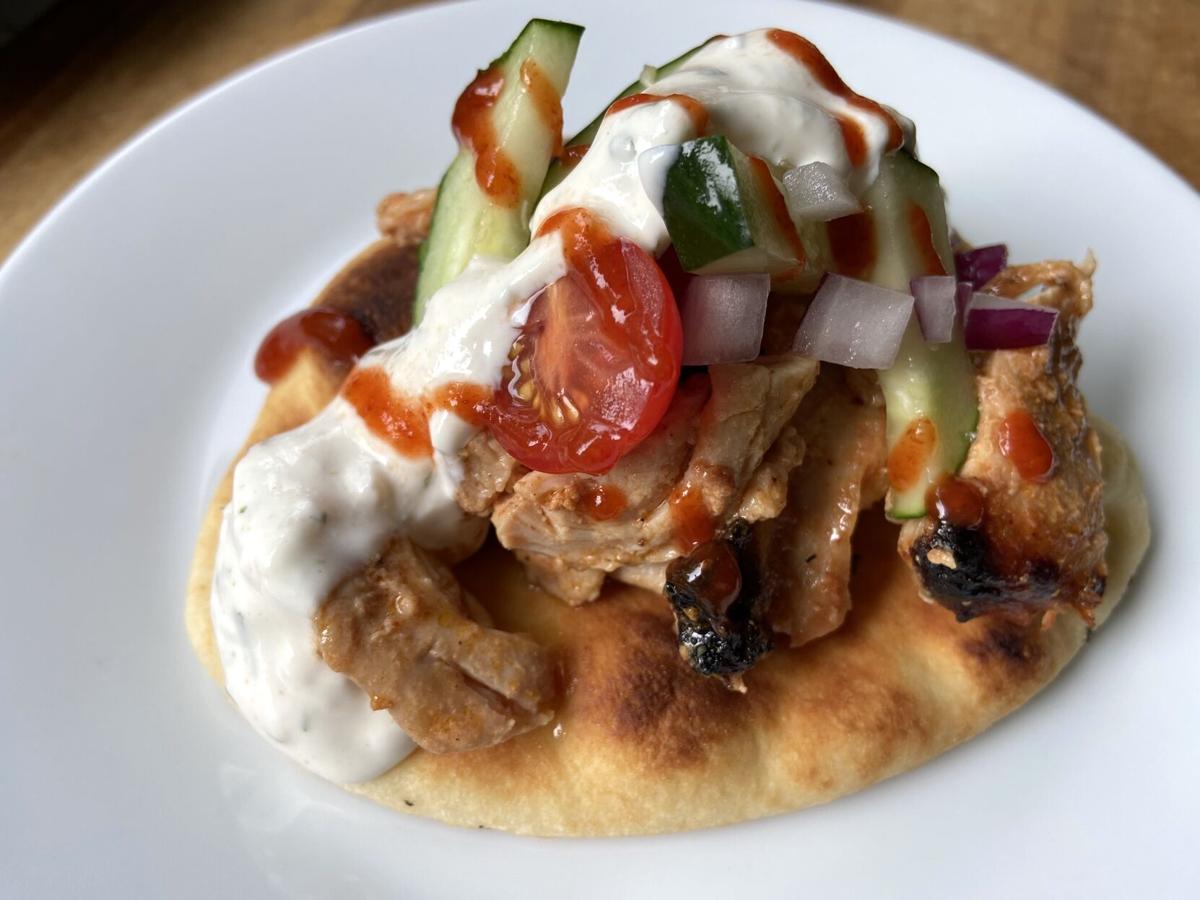 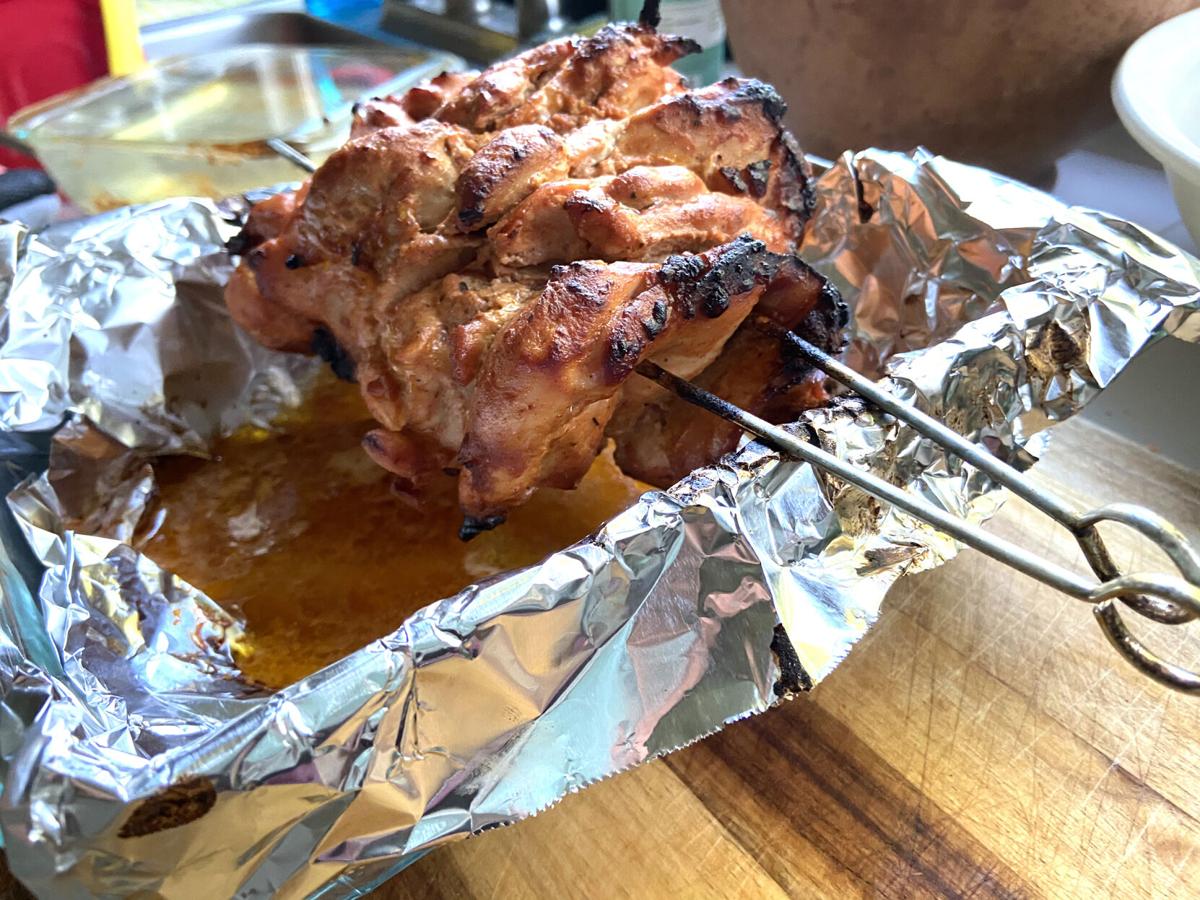 In the oven or on the grill, chicken kebabs make the perfect meaty main course for dinner. Globe | Josie Mai 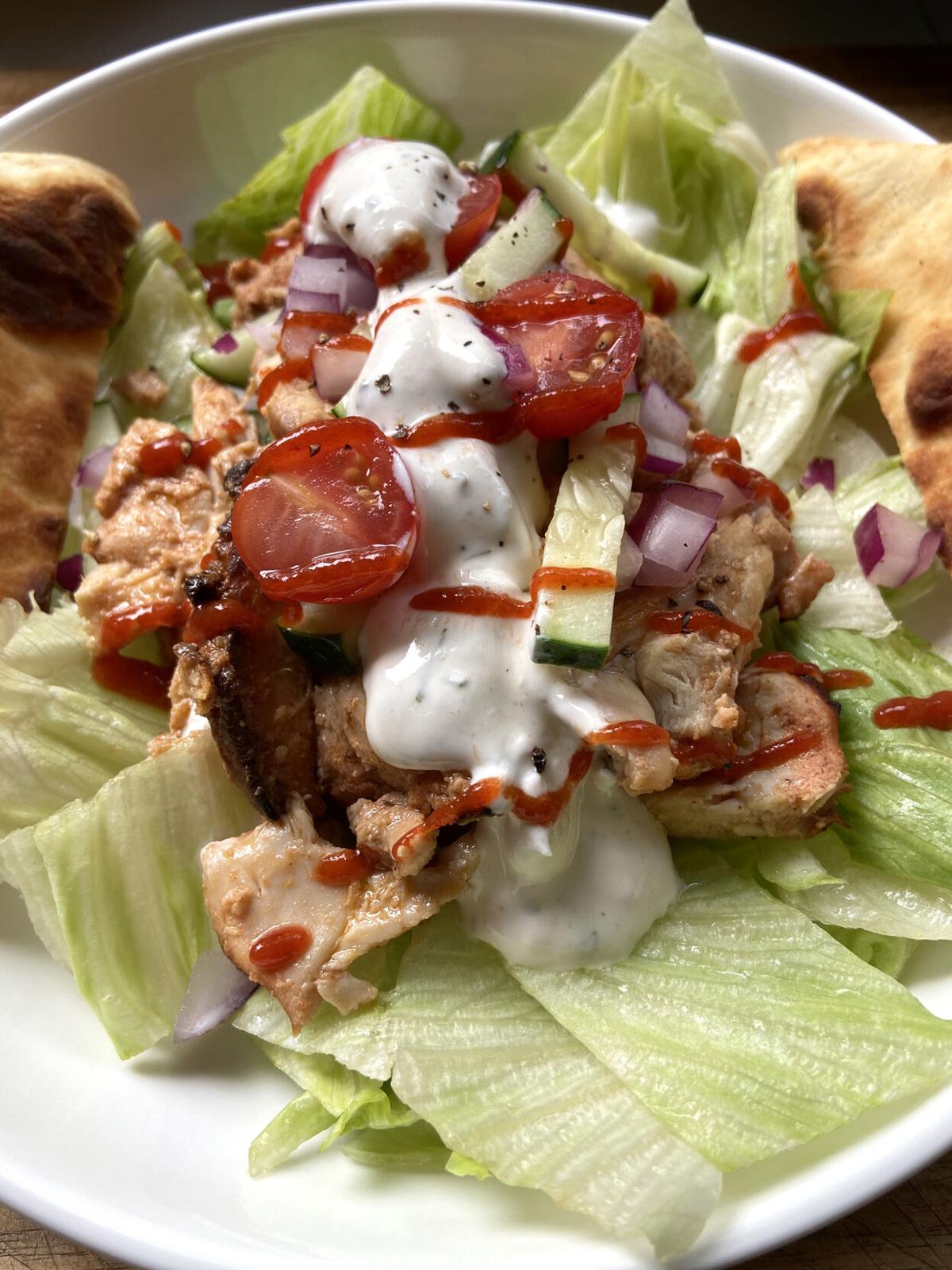 Flat bread, lettuce and your choice of toppings turns this chicken into a delicious gyro. Globe | Josie Mai

In the oven or on the grill, chicken kebabs make the perfect meaty main course for dinner. Globe | Josie Mai

Flat bread, lettuce and your choice of toppings turns this chicken into a delicious gyro. Globe | Josie Mai

Don’t fret: Next week, we’ll return to recipes from our local farmers markets.

But I got super distracted this week: Lance came home for the weekend from his job with the U.S. Forest Service, and the man wanted meat. I was craving something still super fresh and loaded with summer and tastiness.

I found the perfect solution that had us both swooning.

Have you seen the giant rotisserie of stacked, dripping meat, marinating and cooking at the same time, then sliced to order to become a gyro for your belly? Doner kebabs were developed first in Bursa, Turkey, in the 19th century Ottoman Empire. Following World War II, doner kebabs made with lamb were present in Athens, introduced by immigrants from Anatolia and the Middle East.

A distinct Greek variation developed, often made with pork and served with tzatziki sauce — those later became known as gyros and were popularized in 1970s Chicago. Other variations include chicken shawarma and even al pastor, brought to Mexico by Lebanese immigrants in the early 20th century.

I love them all.

Following is Jen of Carlsbad Cravings’ recipe. Usually, I change recipes up a bit to my personal liking, but jacking with this one felt just plain wrong. So here it is, in all its detail and summer glory. Instructions are for baked or grilled (I baked, but grilling gets crispier and more caramelized edges), and for wraps or plates (I tried both). Delicious!

2 pounds boneless skinless chicken thighs cut in half (Note: I did not do this, and the skewers were a bit unwieldy and provided fewer crispier edges, so do it.)

Chili sauce (I use sriracha)

Marinade: Whisk all of the marinade ingredients together in a large bowl. Add chicken halves and stir to thoroughly coat. Cover and refrigerate 8-24 hours.

Garlic yogurt sauce: Whisk the sauce ingredients together in a medium bowl. Chill until ready to serve. The sauce can be made at the time you start marinating the chicken or aim for at least an hour before cooking the chicken.

Using two skewers for each kebab, thread one side of the thigh onto each skewer and then the other side; slide the skewered chicken down to the end. Repeat with half the chicken, pushing the chicken pieces against each other. Repeat to make a second kabob with the remaining chicken.

Preheat grill to medium-high heat. Clean grates and generously grease with oil. Once hot, add kebabs, and grill for 4 to 5 minutes without moving. Flip kebabs and grill the other side an additional 4 to 5 minutes.

Next, flip chicken over, cover and reduce heat so it maintains 400 degrees with the lid closed. Continue to cook, about 5 to 10 additional minutes per side turning once, until chicken reaches 165 degrees. Remove from grill and let rest 5 minutes before carving. Meanwhile, add flatbread to the grill to warm up.

Preheat oven to 400 degrees. Line a pan with foil that allows you to perch the metal skewers on the top rim of the pan so the chicken hangs in the middle without touching the bottom of the pan (see photos).

Bake at 400 degrees for 30 minutes, then flip kebabs. Spoon the pan juices over the chicken and bake an addition 15 to 20 minutes or until chicken reaches 165 degrees.

Optional: Without moving the pan, turn oven to broil and broil for 3 to 5 minutes per side for more yummy crispy bits. Baste again with pan juices. Let rest 5 to 10 minutes before carving.

Meanwhile, wrap the desired amount of flatbread in foil and place in the oven. Heat for 8 to 10 minutes or until warm and pliable. Remove from the oven using oven mitts.

Stand the skewers upright on a cutting board and thinly slice off chicken.

To serve: Spread a generous amount of hummus over warmed flatbread. Top with shredded lettuce, tomatoes, cucumber, red onion, chicken and garlic yogurt sauce. Drizzle with sriracha if you like some heat — careful, a little goes a long way.