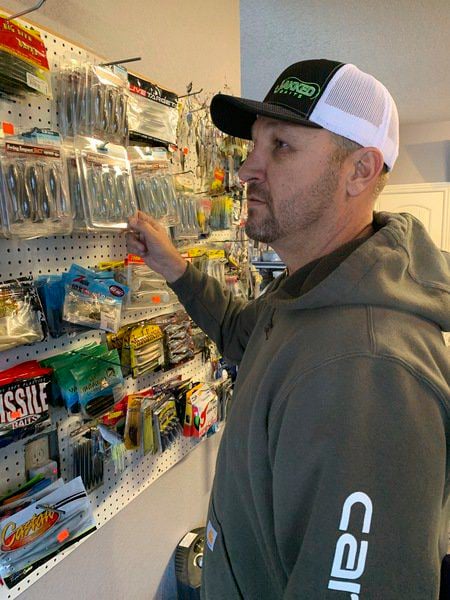 Chad Allison ponders a selection of lures in his garage. Courtesy | Keith Costley 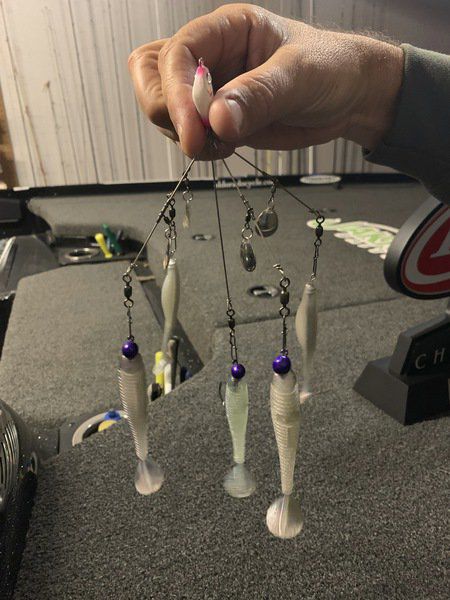 Chad Allison, of Carl Junction, used an Alabama rig in the co-angler division to win the 2019 Costa FLW Series National Championship on Lake Cumberland in Kentucky. Also called an “umbrella” rig, it allows an angler to deliver multiple lures on a single cast. Courtesy | Keith Costley 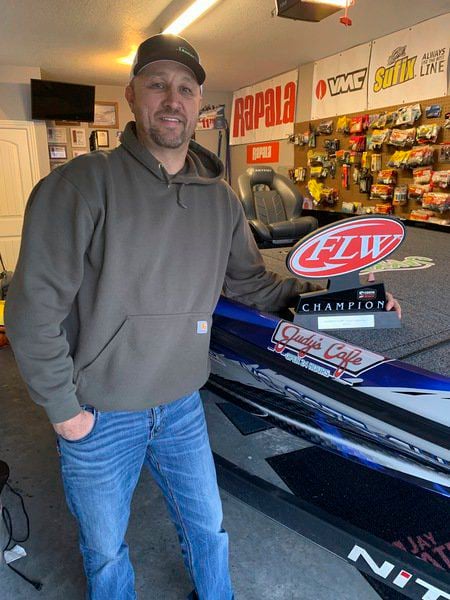 Chad Allison ponders a selection of lures in his garage. Courtesy | Keith Costley

Chad Allison, of Carl Junction, used an Alabama rig in the co-angler division to win the 2019 Costa FLW Series National Championship on Lake Cumberland in Kentucky. Also called an “umbrella” rig, it allows an angler to deliver multiple lures on a single cast. Courtesy | Keith Costley

The Carl Junction angler landed four keeper smallmouth on the final day to win the 2019 Costa FLW Series Championship and $30,200.

Battling back from 10th place in the co-angler division on Lake Cumberland, a 65,530-acre reservoir overlapping six Kentucky counties, Allison weighed in 11 pounds, 3 ounces on the last day for a total of 24-10.

Mason Roach, of Conroe, Texas, the leader after the first two days of competition, placed second. He was 3 pounds, 5 ounces behind Allison.

Allison told me he barely qualified to fish the last day of the event because he was “an ounce from going home.”

He can relate to Roach’s final day of bad luck. During the first Costa tournament in 2019, Allison finished second.

“I was in first place going into the last day and lost by 7 ounces,” he said.

The tournament hosted a 200-boat field of 400 anglers, some from China, Japan and South Africa. The top 10 professionals and co-anglers — 20 in all — based individually on cumulative weight after two days of fishing, qualified to compete in the final round.

A draw matched co-anglers with a different pro each day; pros have the final say on when and where to fish.

“You hope your pro will work with you,” Allison said. “It can be a miserable day or a fun day.”

On opening day, Allison boated three keeper smallmouth on an Alabama rig equipped with “Allison’s A-Jakk“ jig heads that he designed for JaKKed Baits of Springfield.

On day two, Allison had to adapt because the pro fished some unproductive areas. He threw a jig that he’s had success with on Ozark impoundments and landed two keepers to qualify for the final day of competition.

In the final round, Allison had a lot of ground to make up. Fortunately, the pro was receptive to his ideas. Allison practiced with another pro and good friend — Jeremy Lawyer of Sarcoxie — for three days and knew where bass were located.

He went back to the umbrella rig and landed four fish weighing a combined 11 pounds, 3 ounces.

“Dave (Valdivia) was a super nice guy,” Allison said. “He fished the way I wanted to fish.”

When Allison offered Valdivia the use of one of his A-rigs and jig heads, the pro declined.

That’s exactly what Allison did, although they weren’t competing against each other.

“We had a two-hour fog delay followed by a 30-mile boat ride,” Allison said. “Sitting in 10th (place), I was behind the eight ball. The leader was up by 8 pounds.”

With a cooperative pro, Allison was back in his comfort zone.

“I threw the A-rig with the prototypes of the heads that I made for it,” Allison said. “I had 15 of them with me that weren’t available to buy yet.”

After casting for 35 minutes at the first spot, Allison landed a 4-pound, 4-ounce smallie.

“That calmed my nerves down,” Allison said. “I just kept on chunkin’ and windin’.”

With 20 minutes of fishing time left, Allison made a long cast.

That smallmouth weighed close to 4 pounds.

Allison said he plans to fish some 15 tournaments in 2020 as a pro.

“My goal this year is to make it to the national championship at Lake Cumberland,” Allison said. “I have some history there. That will help a lot.”

NEOSHO, MO - Arthur Barker, 76, a retired machinist, passed away Monday, February 17, 2020. Services are planned for a later date. Arrangements are under the direction of Ozark Memorial Park Crematory, Joplin, MO.

Geneva Lou Adler was born October 28, 1934, in Durango, CO, one of three children to Virgil and Blanche (Kulp) Glover. She left this life on earth and was reunited with the love of her life, Harvey Adler, on February 20, 2020, following an extended illness at the age of 85. Geneva spent most…

JOPLIN, MO - Margarita (Mendez) Tyler, 83, a translator, passed away Monday, February 17, 2020. Services will be at 2:30 p.m. Sunday at Derfelt Funeral Home, Galena, KS. Visitation will follow the services until 4 p.m. at the