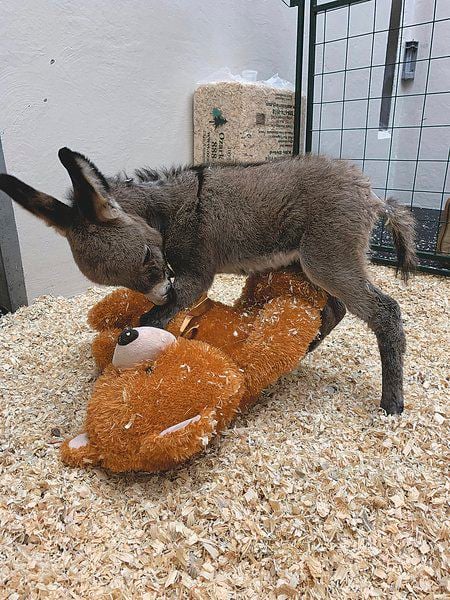 Frankie plays with his teddy bear; he has a knack of jumping over the bear. Frankie is a very sick donkey, but he’s fighting to come back and become an ambassador for T&D Donkey Rescue farms. Courtesy | Deanna Kafka 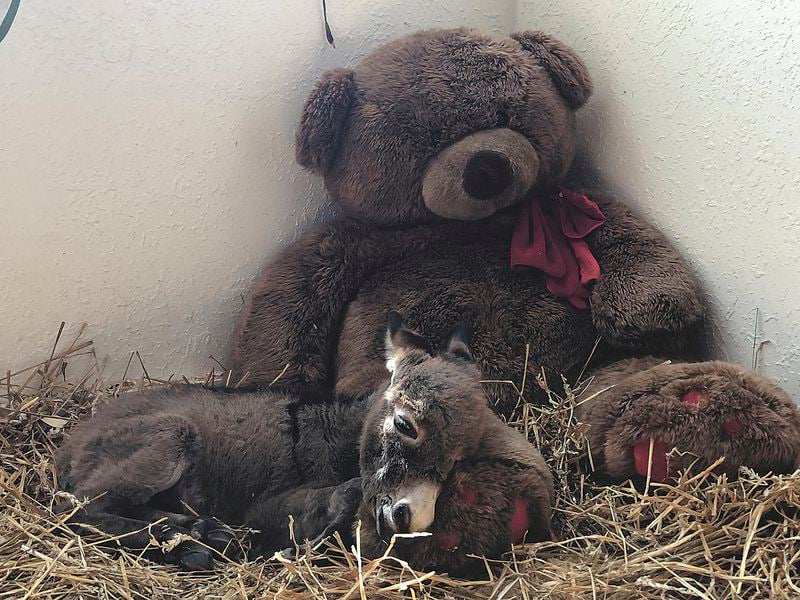 Frankie takes a nap on the leg of his best friend, a stuffed teddy bear. Frankie is a very sick donkey, but he's fighting to come back and become an ambassador for T&D Donkey Rescue farm, which rescues and raises unwanted, neglected or sick donkeys. Courtesy|Deanna Kafka

Frankie plays with his teddy bear; he has a knack of jumping over the bear. Frankie is a very sick donkey, but he’s fighting to come back and become an ambassador for T&D Donkey Rescue farms. Courtesy | Deanna Kafka

Frankie takes a nap on the leg of his best friend, a stuffed teddy bear. Frankie is a very sick donkey, but he's fighting to come back and become an ambassador for T&D Donkey Rescue farm, which rescues and raises unwanted, neglected or sick donkeys. Courtesy|Deanna Kafka

I came across a picture of Frankie last Sunday as I was skimming Facebook posts. It showed this little guy curled up next to a teddy bear. Yeah, I’ll admit, my heart immediately went out to him.

It turns out that Frankie’s a very sick boy and hasn’t had it too easy in life so far. He was born premature, and his mother was so emaciated that she couldn’t produce milk for him. He weighed 14.5 pounds at birth and, at 2 weeks old, weighed only 15 pounds.

Oh, we’re talking donkeys here, by the way — not cats or dogs. But the picture of Frankie with his stuffed animal has stolen more than a few hearts this past week. He absolutely loves his teddy bear, Wilson. He cuddles with it, plays with it, jumps over it. For lack of a loving mother, Wilson has become Frankie’s best friend.

I reached out to Deanna Kafka, the owner of T&D Donkey Rescue Inc. in Liberal, earlier this week to learn more about the little orphan named Frankie and to see how he was doing.

She told me the first time she saw Frankie, she immediately purchased him from his owner. “We feared for his life, which is why we had to purchase him — just to save his life. He was fragile and very sick with pneumonia and some kind of infection.”

When Frankie was taken to see Dr. Amanda Brown-Goltra from Animal Care Clinic in Fort Scott, Kansas, the young donkey’s white blood cell count was “through the roof.” The little guy was rushed to the Veterinary Health Center at Kansas State University, under the care of Dr. Katie Delph.

“He was put on antibiotics via IV,” Kafka told me, but “he didn’t respond as well, so he had many ups and downs during the last 10 days. He suffers from reoccurring diarrhea. He had a rectal prolapse from straining and had to have that fixed. He also had an infection on his neck which was a large abscess. His condition started to get better, then he ended up having a fever and his white blood cell count was back on the rise. He needed a plasma transfusion along with an antibiotic change.”

The good news? “He seems to currently be improving,” Kafka said.

But they could always use financial help to pay for Frankie’s treatment, which has eclipsed the $4,000 mark. As Kafka put it, “his medical expenses are through the roof, but he is worth every penny.” Check out the T&D Donkey Rescue Facebook page if you want to contribute to his medical expenses until he can be brought home to live out his days on the farm.

“If everyone who reads this article would donate just $1, can you imagine how many ‘pennies from heaven’ that would be? They would be life changing,” Kafka said.

I’ve written several stories over the years about this very special farm. Currently, it is home to 130 donkeys of all sizes, shapes and colors, as well as 17 horses, one hinny and one mule.

“We work hard to share how amazing donkeys are,” Kafka said. “They are super smart, comical, affectionate and very willing partners when they feel safe and are treated with respect. We work to educate people on how to care for, treat and train donkeys. We also work with Easter Seals who brings amazing kids out for ‘donkey time.’ Donkeys help people find a sense of peace even in a big herd. We adopt equine to amazing homes, some of which are children and adults who have cancer, autism, and other health issues. We have adopted equine out to be service animals. Some of them go to schools and nursing homes to make connections people normally wouldn’t have access to.”

Donkeys, I was told, are very misunderstood — and oft-mistreated — creatures. This is something Kafka has dedicated her life to change.

“We have found that donkeys are so misunderstood as an animal,” she said. They are often thought of a being stubborn, kickers or just plain stupid. “Actually, they are super smart and need to be trained different than a horse, and that is where people get into trouble. (People) feel that their horse experience can be applied to donkeys, which is the farthest from the truth. So we work hard to answer people’s questions.

“Donkeys have changed my life, along with so many others,” she continued. “They are much more affectionate than horses, and they are one of God’s true healers.”

T&D Donkey Rescue, located at 500 NW 110th Lane in Liberal, is open to the public by appointment only.

“We have people visit our facility from all across the country,” she said. “We give tours to people of all ages as long as they are physically able to walk out into the fields.”

For details about helping out with Frankie’s expenses or to learn more about the farm and what Kafka does there, give them a call at 417-214-9010.