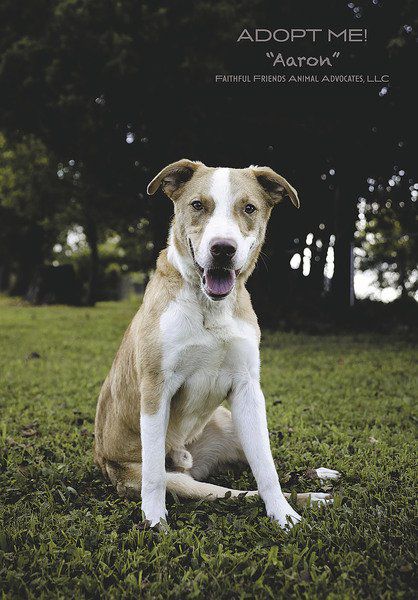 This is Aaron at the Faithful Friends Animal Advocates shelter in Neosho. He is fighting kennel stress and needs a family and home of his own.Courtesy|Jenn Thompson 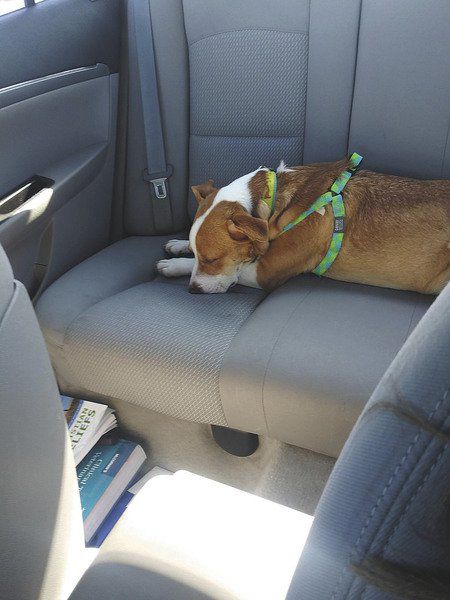 Amber Ferry recently took her best bud on a day foster trip, and he had a pretty wonderful day outside of the shelter, as evident by this picture of him happily dozing in the backseat. Courtesy | Amber Ferry

This is Aaron at the Faithful Friends Animal Advocates shelter in Neosho. He is fighting kennel stress and needs a family and home of his own.Courtesy|Jenn Thompson

Amber Ferry recently took her best bud on a day foster trip, and he had a pretty wonderful day outside of the shelter, as evident by this picture of him happily dozing in the backseat. Courtesy | Amber Ferry

Two hundred and fifty-one days. That’s how long a dog named Aaron has lived at the Faithful Friends Animal Advocates shelter in Neosho. He and his sister, Jane, were surrendered by their owner to the shelter eight months ago. Sadly, Jane found a new home. Aaron, left behind, is still awaiting his.

And as with most dogs who spend long periods of time inside shelters — 251 days, remember? — this border collie/Jack Russell terrier mix has slowly, over time, shown signs of extreme kennel stress. While some dogs cower at the back of their kennels or aggressively bark, or grow destructive by shredding toys and blankets, the 32-pound Aaron began making messes in his private space, something he hadn’t been doing earlier in his stay and that isn’t normal dog behavior.

Something had to give.

That something, it turned out, was Amber.

Amber Ferry, to be exact, a vet tech student from Crowder College who volunteers at least once a week at the no-kill shelter. When the two met, it was clear that Aaron had met his favorite human.

“I go in and the first thing I do, after signing in, is grab some treats and hand them out, and Aaron always gets his first,” Ferry said Thursday during a phone interview. “Any time he sees me, he starts bouncing off the cage doors. When we go outside, he stays by my side.”

Ferry quickly learned that Aaron loved playing fetch, which is a border collie trait. She also discovered that he had been taught to sit on command. So when the two weren’t running the outdoor obstacle course together, she was literally teaching the dog new tricks.

“He was just so ornery at first, just because he had so much energy, but he quickly learned,” she said.

Over the past six months, she has taught Aaron how to lay, shake, high-five, roll over, sit down, play dead, and find — which, in essence, is figuring out which closed fist holds a treat. She is currently teaching him how to wait and crawl.

Mental tasks of learning these commands are helping Aaron reduce his kennel stress because it’s keeping his mind active and healthy — just as important as physical exercise. Better yet, it will also make him more presentable to potential owners when come a-calling.

It also demonstrates, said FFAA director Nicole Porter, the value of volunteers at animals shelters and how the latter could not possibly run smoothly without the former.

“Volunteering doesn’t necessarily mean coming out here and picking up poo and cleaning; we have individual animals that could really use the extra attention to help burn off some of that energy.

“I just love the idea of people knowing what one volunteer does and how much of a (positive) impact that has on one dog’s life,” Porter continued. “We spend so much time cleaning and taking care of the facility that we don’t necessarily have the time to spend on (each individual animal) — and that’s where the volunteers help so much.”

Ferry said she would adopt Aaron in a heartbeat if she could. Unfortunately, she’s living in a college dorm that doesn’t allow animals and still living with her parents in a town nearly five hours away. She already has a beloved pet that looks eerily similar to Aaron.

“I guess I have a preference for (Aaron’s color) and his eyes. He has really gorgeous eyes,” Ferry said.

She’s confident that Aaron will find a good home.

“He’s such a sweetheart.”

In other FFAA-related news, next Saturday and Sunday — Super Bowl Sunday, that is — adoption fees will be dropped to some very special low prices. Can you guess what those numbers relate to? (Hint – I just gave it away above).

Do those numbers ring a bell?

You get five seconds to figure them out …

OK, time’s up. No. 15 is the jersey number of Kansas City’s Patrick Mahomes, while the Chiefs will be playing in the 54th Super Bowl.

Have fun, adopt pets from local shelters, and go Chiefs!