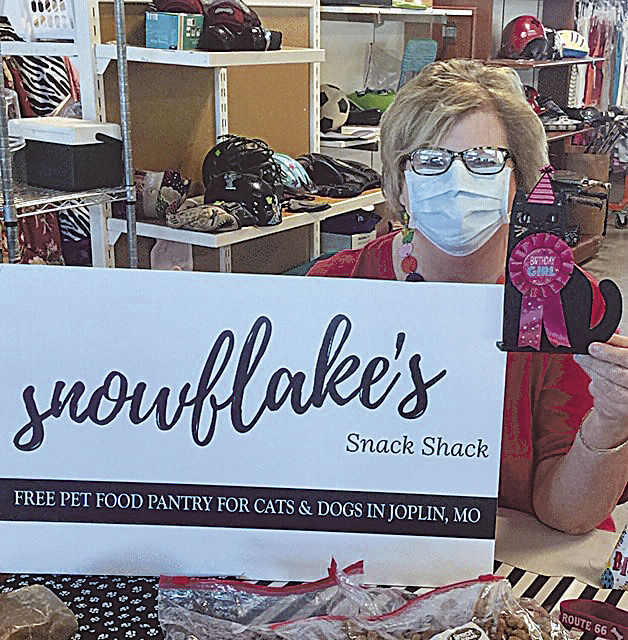 Ann Leach celebrated earlier this month the 1-year birthday of Snowflake's Snack Shack, which helped generate and distribute 800-plus pounds of free dog and cat food to pet owners in need in late 2019 and early 2020. 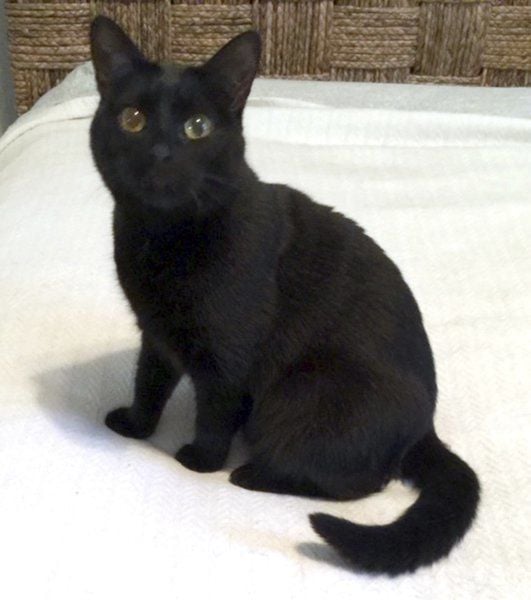 Snowflake will become the face, mascot and spokescat for the Snowflake Snack Shack enterprise, which, beginning in April, will offer free dog and cat food to those with pets who need it. Courtesy | Ann Leach

Ann Leach celebrated earlier this month the 1-year birthday of Snowflake's Snack Shack, which helped generate and distribute 800-plus pounds of free dog and cat food to pet owners in need in late 2019 and early 2020.

Snowflake will become the face, mascot and spokescat for the Snowflake Snack Shack enterprise, which, beginning in April, will offer free dog and cat food to those with pets who need it. Courtesy | Ann Leach

It seems like yesterday that I last wrote about Snowflake’s Snack Shack, the free pet food pantry for cats and dogs in Joplin. Much to my surprise, I discovered it’s been a year ago this month. Amazing how time flies.

Last June 13, my friend Ann Leach was handing out bundled packages of dog and cat food to pet owners who stopped by the Salvation Army Family Store along Seventh Street. During that first year, 308 Joplin area pet owners were given 828 pounds of food (507 pounds of dog food, 321 pounds of cat food) — “not bad for a couple of hours each month,” Leach wrote last week on Snowflake Facebook page. All the thanks, Leach continued, goes to the 40 volunteers and “the untold number of people who donated that food to the cause.” This included the INSPIRE program through Ozark Center bringing clients on multiple months to bag food as one of their community service outings, and First Christian Church Sunday school kids helping to bag food one month. “And of course that doesn’t include the many people who have purchased the pet food to donate,” Leach said. “I will never know who they all are, but their giving is appreciated.”

Leach and her small army of volunteers were back at it again last weekend, handing out free cat and dog baggies to pet owners in need. And the process will repeat itself, from 11 a.m. to 1 p.m. on Saturday, July 11, inside the Salvation Army Family Store.

“I have always believed that ‘thoughts held in mind produce after their kind’ and this project has been the perfect reminder for me,” she said a year ago about the community pet food pantry. “I knew the Snack Shack would happen. I just didn’t know the ‘how’ part — and that was OK, because I had faith the pieces and the people would come together in the right timing.”

From now until then, Snack Shack’s shelves will need to be filled. If you want to donate, please mark pet food with “SSS” in Sharpie ink and drop it off at the Joplin Humane Society. Just tell the front desk workers that the food is designated for Snowflake, and they’ll take it from there. Both cat and dog food is needed.

Volunteers are also needed to help bag the food and distribute it to the public on July 11. Both tasks, Leach said, takes only an hour of your time. Because of social distancing, she is limiting the number of helpers bagging food to just three. The bagging will take place at 9:30 a.m. on Friday, July 10, inside the Joplin Humane Society’s garage. Bring water, because the summer heat can build up inside quickly. The food is then stored at the shelter and transported to the downtown community center on distribution day.

“This is a gift. It’s not designed to feed your pet for a whole month. Its a gesture to get you through a tough spot for maybe a week or so,” Leach said when she first launched the food pantry. “We can’t accommodate requests for certain brands because we can’t guarantee that we’ll have that brand each month We are paying attention to the distinction between puppy and dog, kitten and cat, but that’s about as far as we can go.”

The idea came about when Leach befriended a homeless man and his service dog. While the man and his dog loved one another, truly depended on one another, both were clearly struggling to find adequate food. Leach began bringing food to the man’s dog, who would wolf it down. She offered the man an opportunity to obtain some free dog food, but he declined, telling her: “I can’t lug around a 10-pound of dog food everywhere I go.”

So Leach decided she needed a centralized location in downtown Joplin for people to obtain food for their pets quickly and easily and without a lot of fuss. Think of the Snack Shack, she says, as something akin to the free libraries and food pantries popping up all across America where people are free to take out or put in what they need as they please.

“I continue to be inspired by the giving spirit of so many people in this town,” Leach recently told me. “Whether it’s a big need or a small one, the people here come through.”

“I would love to see expanded services to the area,” Leach said. “It would be great to deliver food to low income housing facilities that allow pets or to add an additional distribution day per month so that we can serve even more people. We would need some additional volunteer leadership to make these things happen, but I believe it’s all possible.”

Kevin McClintock is features editor for The Joplin Globe.

To volunteer or to donate, call Ann Leach at 417-438-6808 or leave a message on the Snowflake’s Snack Shack’s Facebook’s page.