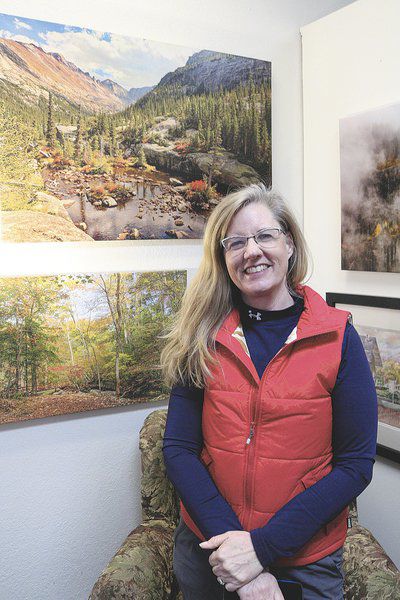 Koral Martin sits in her gallery in Carthage with her nature photography. Courtesy | Koral Martin 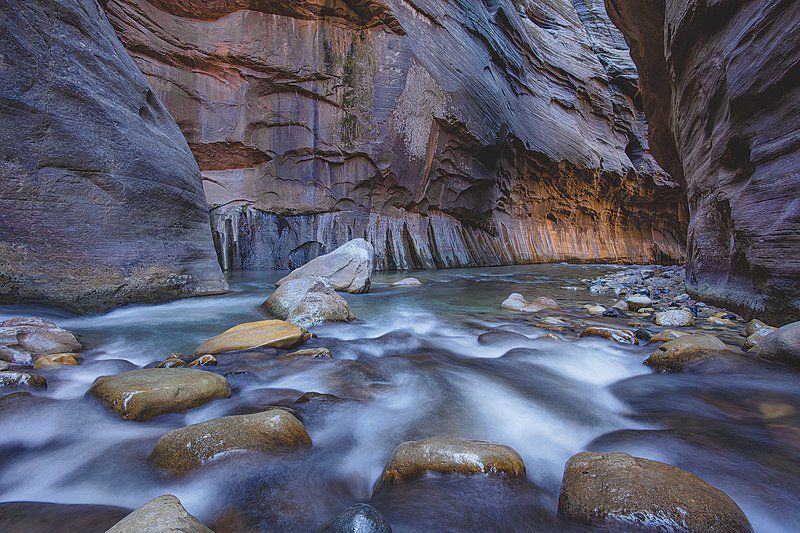 Professional photographer Koral Martin of Carthage photographs nature’s beauty that surrounds everyone, every day, if they would simply stop and take a look. Courtesy | Koral Martin 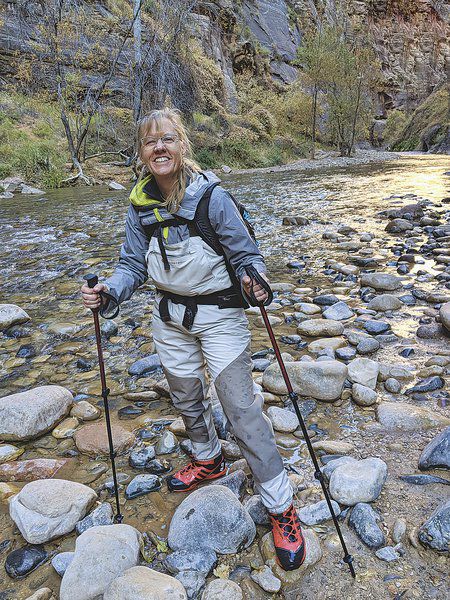 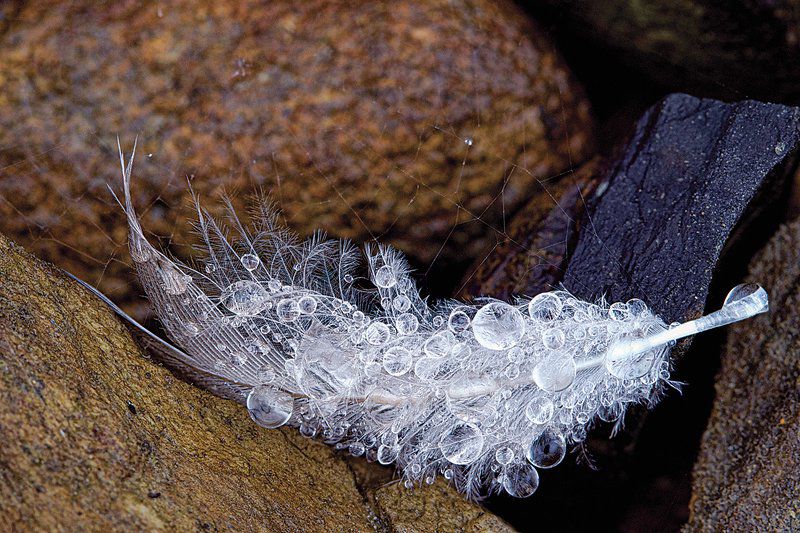 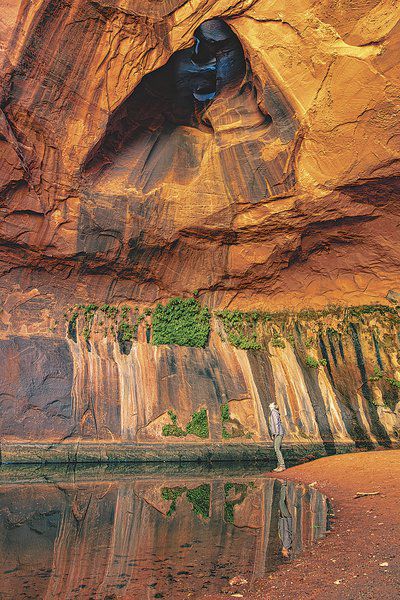 Koral Martin is surrounded by the Golden Cathedral in in the Grand Staircase-Escalante area in Utah. Courtesy | Koral Martin

Koral Martin sits in her gallery in Carthage with her nature photography. Courtesy | Koral Martin

Professional photographer Koral Martin of Carthage photographs nature’s beauty that surrounds everyone, every day, if they would simply stop and take a look. Courtesy | Koral Martin

Koral Martin is surrounded by the Golden Cathedral in in the Grand Staircase-Escalante area in Utah. Courtesy | Koral Martin

CARTHAGE, Mo. — When Koral Martin looks around her Jasper County-based gallery, she sees reminders of Mother Nature’s creations hanging on her walls.

The work, photographs taken by Martin in the past 15 years, features everything from scenic landscapes to macro photos of water droplets gliding off of leaves and flowers.

For Martin, it’s a reminder of what people can see in the world when they take time to look.

“We are surrounded by a beautiful world that most of us never take time to go out and see,” Martin said. “God’s creation has so much uniqueness, and I love to capture that. I love how nature creates a sense of calm and helps reduce stress.

“There’s just so much out there, and I just love to go out to see it and capture it. It’s a passion.”

Martin came from an art-loving family. Her father, Parham Baker, was a nonpracticing artist. As an architect, Martin said her father was very supportive of her art. He even helped name her business KoKa Art for Koral Kathleen.

Martin said her uncle, Pleddie Baker, was also supportive of her work. In fact, Pleddie Baker funded her first trip out west to take photographs at several national parks.

“He saw something in me just like Dad had and wanted to support me,” Martin said. “I don’t know where I would be without them.”

As a teenager, Martin would play around in the family’s darkroom. In the mid-2000s, she picked up a camera again — this time digital.

“I latched on and gave it my focus,” Martin said. As an artist, she began exploring different techniques to create landscapes and macro photos.

Since her first trip out west, Martin has traveled to multiple locations to shoot photos. Last fall, she learned about a workshop that combined photography and extreme hiking within several national parks.

While the workshop was filled up, Martin was connected by organizers with a few others interested photographers. The four worked together with a guide to develop their own trip to some of the same locations.

“It was a huge journey,” Martin said, adding she wanted to share the journey with people beyond a few social media posts.

She developed a fundraiser that allowed people to help fund her trip. In turn, they were invited to get a deeper look at the experience through a series of photographs and videos created by Martin.

The money raised by supporters allowed her to purchase some additional equipment for the trip, including tripods for her iPad and phone, a new backpack and wading gear.

“I just wanted to get people involved in the journey,” Martin said. “I really felt like it was for more than me.”

While some were in places Martin might have ventured on her own, others needed the experience of a guide to access.

“I like to see places most people will never see,” Martin said. “When I hike, part of it is I get a hiker’s high. Seeing the deep places people don’t always see is exhilarating and exciting with a lot of ‘ah ha’ moments thrown in. I like seeing places other people don’t know exist.”

“It almost feels like you are on Mars,” Martin said with a smile. “It’s so foreign to what the average person ever sees, it is exciting.”

Martin loves to shoot photos of waterfalls, because of the sense of peace she gets from watching the water.

“I love to capture the beauty,” Martin said. “It takes me to a different place. I could sit all day at the foot of a waterfall.”

She also likes to photograph water drops on flowers, leaves or even feathers, adding she enjoys capturing reflections in unusual ways.

Martin uses a Canon 5DSR, a full-frame camera, to capture most of her photographs. Her 24/105 lens is her go to item, along with a macro and wide-angle lenses. The 50-megapixel camera allows her to do different things with her photos — from capturing the minute detail to allowing a frame to be expanded to fill an 8-by-10-foot wall space. While she uses her phone to record quick memories, she said nothing compares to what her camera can capture.

Outside of her gallery and special showings, Martin’s work is featured throughout McCune Brooks Hospital in Carthage and other hospitals throughout New Mexico, Illinois and Virginia.

She likes knowing her photography makes a difference in people’s lives and often hears from people who have been influenced by her work.

“This is a truly amazing world,” Martin said. “It is full of magic, beauty and uniqueness. The world and nature truly amazes me.”

For those interested in photography, Martin has one suggestion — never quit learning.

“I’m always learning something new,” Martin said. “Get out there everyday and take pictures. So when you get in a situation, you know the settings, angle and more. Practice does make perfect.”

Martin hopes to travel to the East Coast later this year to capture images of the fall foliage. She would also like to travel to New York to photograph Niagara Falls. Other bucket list destinations include Alaska, Iceland and Hawaii.

She plans to travel to Colorado again this year to shoot photos and visit her sons who leave near Boulder.

“When I’m in Colorado, I feel like this is where I belong,” Martin said.

This month, Koral Martin’s photograph is on display at Joplin Avenue Coffee Company at 506 S. Joplin Ave. in Joplin. Her work is also on display at KoKa Art Gallery located just off the square in Carthage. Martin’s work hangs alongside approximately 35 other emerging artists. Additional information may be found at facebook.com/kokaartgallery.