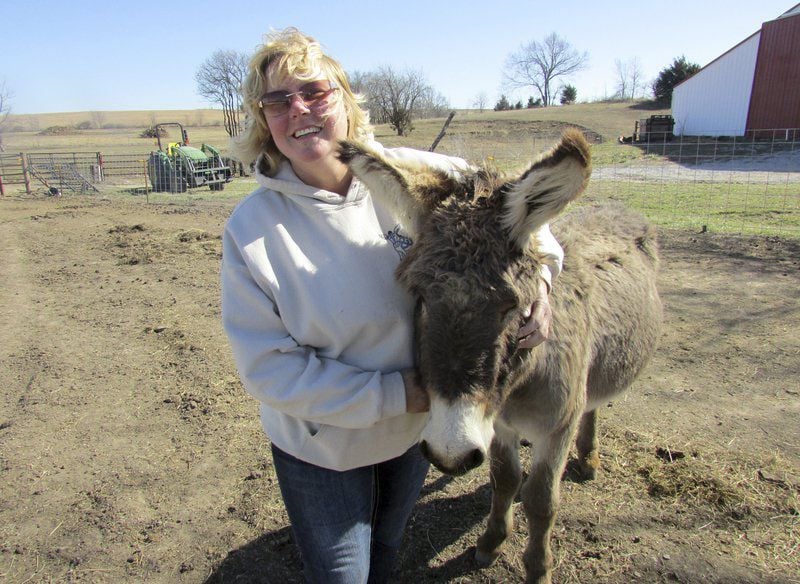 Deanna Kafka, with T&D Donkey Rescue, has a fun moment with one of the 41 donkeys currently calling her Barton County farm home. She nurses these abused and traumatized animals back to health. Globe | Kevin McClintock 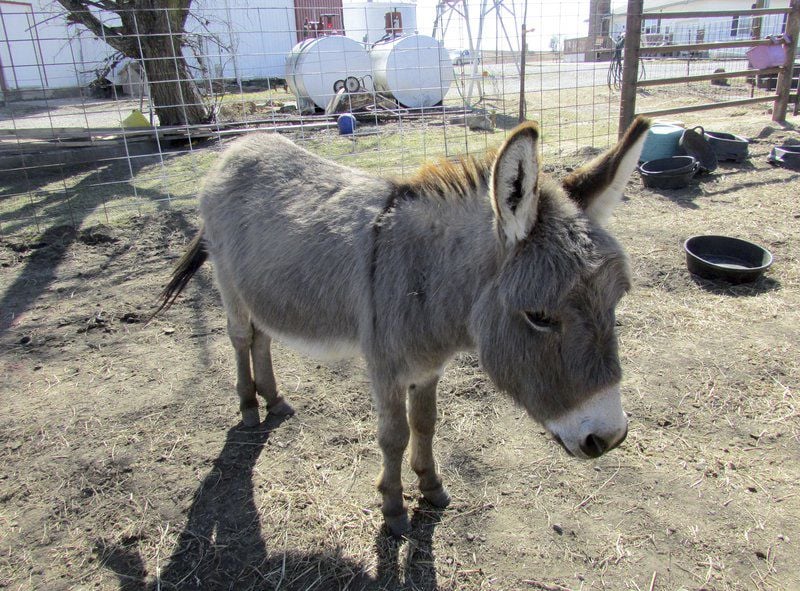 Meet Mini-coop. He's the smallest of all the donkeys found on the farm, but he is the undisputed herd boss. You don't mess with Coop!  Globe | Kevin McClintock 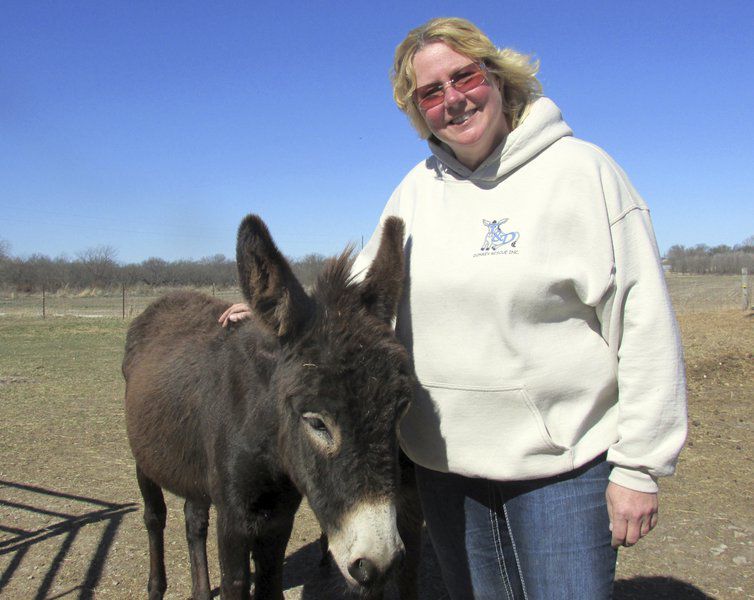 Deanna Kafka poses with Hazel, a donkey that came in starved and near death. She is now healthy and happy.  Globe | Kevin McClintock 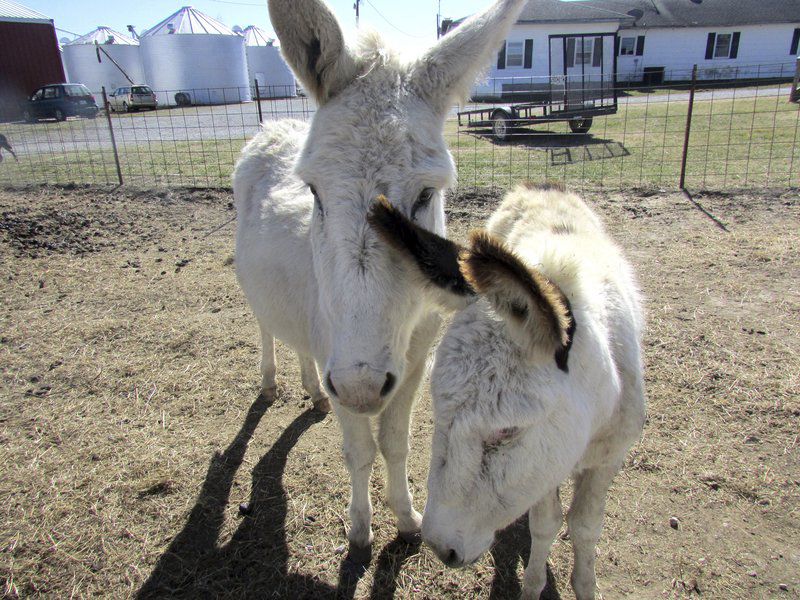 Donkeys are known as the dogs of the equine world. And like dogs, they crave interaction with other animals. Globe | Kevin McClintock 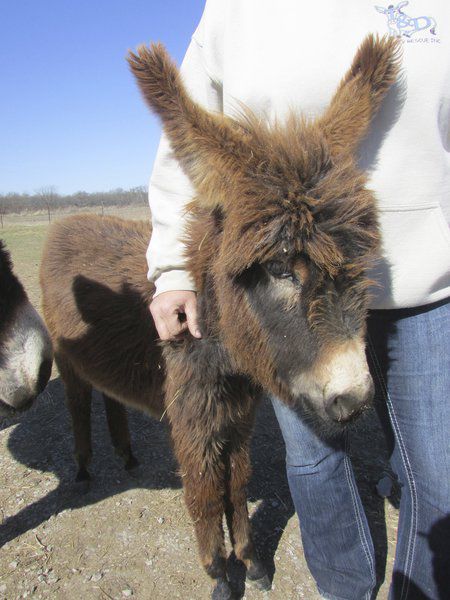 This is Bonnet, Hazel's daughter. She is just 4 months old.  Globe | Kevin McClintock

Deanna Kafka, with T&D Donkey Rescue, has a fun moment with one of the 41 donkeys currently calling her Barton County farm home. She nurses these abused and traumatized animals back to health. Globe | Kevin McClintock

Meet Mini-coop. He's the smallest of all the donkeys found on the farm, but he is the undisputed herd boss. You don't mess with Coop!  Globe | Kevin McClintock

Deanna Kafka poses with Hazel, a donkey that came in starved and near death. She is now healthy and happy.  Globe | Kevin McClintock

Donkeys are known as the dogs of the equine world. And like dogs, they crave interaction with other animals. Globe | Kevin McClintock

This is Bonnet, Hazel's daughter. She is just 4 months old.  Globe | Kevin McClintock

LIBERAL, Mo. — If you’re a dog lover, you’re probably going to fall in love with the lovable donkey.

After all, these beasts of burden are “the dogs of the equine world,” according to Deanna Kafka, who operates a donkey sanctuary on her Barton County farm.

Think of Kafka’s T&D Donkey Rescue as a humane shelter — but for jacks and jennies rather than cats and dogs.

Saved from local kill pens or from owners no longer capable of caring for them, Kafka rehabilitates neglected, abandoned and abused donkeys and eventually finds new, loving homes for them. Last year, nearly 30 of these gentle creatures left the farm for greener pastures elsewhere. All of them had very familiar-sounding pet names, too: Popcorn, Beans, Colton, Mason, Jasper and Bear, to name just a few.

“They are magnificent animals, and my heart bleeds (for them),” Kafka said. “My heart just bleeds.”

Kafka’s deep love for donkeys came late in life. For decades, she had eyes only for the donkey’s more revered cousin — the horse. Kafka was riding at the age of 3.

“In rural Wisconsin, I was never introduced to donkeys,” she said. “All of those years, I never knew anything about them; I was never really fascinated by them. I had always ridden horses.”

But a tragic accident would dramatically change that. Climbing onto a horse she’d never ridden before, the horse spooked while she was still off balance and bucked her off. Landing awkwardly on the ground, she fractured a vertebrae. Although her back healed, she found herself unable to climb back atop a horse. Over the years, the severity of her fear worsened, she said. In fact, her body language around the horses reeked of it, which in turn unsettled the animals.

She operated an equine rescue with her husband, Tom, for nearly 20 years previously. After moving to her farm east of Liberal, she made a fateful decision in late 2014.

“Tom and I were in Texas when I (received) a private message about two jennies left in a kill pen in Oklahoma.” All of the other healthy ones had been saved, she said, but nobody wanted the two remaining animals, which were skinny and sickly. “So I said we would take them.

“They were in horrible condition,” Kafka continued. “Skin draped on bone. One of them we named Donkey after the movie ‘Shrek.’ The other we called Floppsalot because her ears hung low.”

After spending $1,200 on Donkey, the poor thing was euthanized after she sat down early one morning and refused to get up; she’d given up on life, Kafka said. And Floppsalot will likely be euthanized later this year as well because of injuries to her back legs.

“Floppsalot was used as a roping donkey,” Kafka said, “which causes irreversible damage to the tendons and ligaments of the hind legs. Right now, we have her on constant pain medication, but she can hardly (walk).”

A roping donkey is just as it sounds — young men and women hoping to perfect their sport roping skills ply their trade on a $20 donkey rather than a $500 calf, Kafka said. Physically, donkeys aren’t designed for such abuses, and the yanking and pulling of the knotted rope upon the hips and calves can cause horrific injuries, she said.

Throughout the last two years, on dozens of occasions, Kafka had made her way to a kill pen and, out-bidding all others, saved scores of donkeys from slaughter. For around $20, she said so-called “kill buyers” will purchase a donkey from an owner and ship it by truck south to Mexico, where donkeys are butchered for their meat, which is much sought after in Latin America and across Europe, she said.

“It’s really the journey on the slaughter pipeline that’s so horrible,” she said.

But it was Kafka’s close interaction with Donkey and Floppsalot that convinced her to become a donkey-specific rescue.

“I wish I had switched to donkeys 20 years ago,” she said.

When the donkeys — mothers with young ones; lone males; pregnant females — come to the Kafka ranch, “they don’t have hope. They have no reason to believe or have trust in humans. Our goal is to regain that trust again before adopting them out.

“I promise each one of them to make sure they’ll never end up where they were again.”

Donkeys have always been important animals in American culture. The first donkeys came to North America via Mexico in 1528, it’s believed. They were the favored beast of burden during the gold rush years. It was the donkey, remember, who bore the messiah on its back in Zechariah 9:9: “Behold, your king is coming to you ... lowly and riding on a donkey.”

“They are smarter than horses,” Kafka said, laughing, admitting her statement might make horse lovers mad — “but they are. They are also very big self-preservationists, which people interpret as stubborn.”

Problems occur when people treat a donkey like a horse. That’s a big no-no, she said.

“If you try to train a donkey like a horse, a donkey won’t cooperate,” she said. “Because they think differently. So people find them stubborn. But once people understand what makes a donkey tick, (the donkeys) will do almost anything for you.”

Donkeys also require consistent interaction with either humans or other animals. That’s why the image of a donkey eating grass in a pasture all by its lonesome is absolutely the wrong one, Kafka said.

“There’s this cultural belief that a donkey doesn’t need the same type of maintenance that a horse does; that they are more hearty; that they are loners,” she said. “But if you leave a donkey out to rot by themselves in a field, they won’t be happy. They are social creatures.”

When an abused or starved donkey comes to the farm, Kafka slowly gains their trust simply by giving them space. She doesn’t approach them. She doesn’t make loud noises. She doesn’t try to force anything on them. Instead, she lets them wander the pen, eating hay, spending time with the other rescued donkeys, while she sits on a nearby stool, grain bucket at her side. It may take a week, maybe even a month, but eventually the donkey will initiate physical contact with her.

“To watch their eyes turn from horror to helpful is just a beautiful thing to see,” Kafka said. “That is my reward.”

Currently, there are 41 donkeys living on the farm. There is Hazel, a sweet girl, who had been left to starve in a field before Kafka rescued her. Clinging to Hazel’s side is her daughter, Bristol, who is just 4 months old. There’s Abilene, a 3-month-old baby whose mother was sent to slaughter; thankfully, she bonded with Bonnet, who has become her surrogate mother. The tiniest adult donkey found on the ranch is Mini-Coop. Despite his short stature, he is the undisputed boss of the herd. He keeps everyone in line and brays loudly at any approaching dog.

Last year, Kafka spent nearly $20,000 in medical bills to care for the animals, so donations for medical expenses are always needed and appreciated. The fee to adopt a donkey ranges from $150 to $225 — they go as pets, to “guard” sheep and goats in fields or as driving animals. And there’s a clause in the contract that states if the donkey for whatever reason has to be given up, the jack or jenny must be returned to the ranch, no questions asked.

“We are open to the public by appointment to allow the public to actually come and be around donkeys and see how affectionate they are,” she said. “Part of our mission ... is to reduce future cruelties through education and interaction and bringing awareness of the cruelties they endure. I feel that when people can come into contact with them, they will see how neat they are.

“We hope that when people leave our facility they take away a more positive connection with them.”

A saddle raffle will be held at 2 p.m. on Wednesday, March 15, at Frontier Equestrian, 223 W. Grand Ave., Jasper. Entrants can purchase one chance to win the saddle for $10 or six chances for $50. Online tickets can also be purchased. The raffle is a fundraiser for T&D Donkey Rescue Inc. for continued medical treatment to their rescued donkeys.