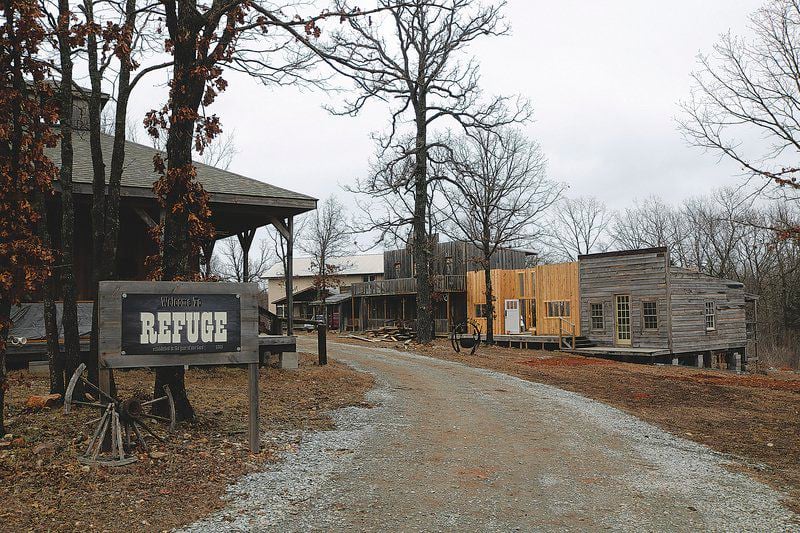 Refuge is a western town being built outside of Zena, Okla. Owners David and Christi Hinton hope the facility will have a two-fold purpose — to serve as a movie set and as a retreat for those getting out of addictions. Courtesy | Kaylea M. Hutson-Miller 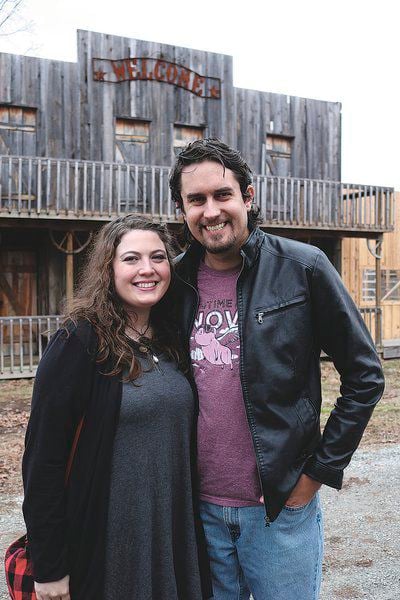 Sean and Kylie Hunt stand in the Western town that will be the set for their next movie, “White Rider Returns.” Courtesy | Kaylea M. Hutson-Miller

Refuge is a western town being built outside of Zena, Okla. Owners David and Christi Hinton hope the facility will have a two-fold purpose — to serve as a movie set and as a retreat for those getting out of addictions. Courtesy | Kaylea M. Hutson-Miller

Sean and Kylie Hunt stand in the Western town that will be the set for their next movie, “White Rider Returns.” Courtesy | Kaylea M. Hutson-Miller

ANDERSON, Mo. — What began as a desire in middle school to make clean films has led a McDonald County man to a career creating Christian-based films.

Now with two films, “Swing Set” and “The White Rider,” under his belt, Sean Hunt has set his sights on creating two additional films and a television show.

Next month, Hunt — who runs Hunt Production Studios in Anderson with his wife, Kylie — plans to conduct a gathering to tell others of this plans.

While the event — set for 7 p.m., Saturday, March 28, at Banner Church in Anderson — is free, it will give potential investors/sponsors a chance to learn about Hunt’s dreams, while helping the couple raise the $50,000 needed to complete the project.

“We hope people will come, hear what we want to do, and if so led by God, donate to the project,” Hunt said. “Unfortunately, movies don’t fund or make themselves. It takes a lot of resources.”

“Everyone would say, ‘How can you make money?’” Hunt said. “But I knew I wanted to create clean, quality, Disney-esque films.

Some of his earliest inspirations come from “The Chronicles of Narnia,” where C.S. Lewis mixes biblical allegories within his novel’s characters.

“Faith is part of everyday life in some capacity, whether we admit it or not. Faith determines how we live,” Hunt said.

After graduating in 2006 from McDonald County High School, Hunt pursued a degree at Webster University. It was in college, Hunt said, that he began to feel called to create Christian movies. His first work, “Swing Set,” was created almost as an experiment.

“It’s based upon a true story and is all about faith in God,” Hunt said.

The film, which premiered locally in Anderson, Webb City and Grove, Oklahoma, resonated with audiences.

“Swing Set” led to “White Rider,” which Hunt began creating in 2011. Filmed in and around McDonald County, Missouri, and Delaware County, Oklahoma, in 2015, the Christian Western is set in America from 1860 to 1880.

It tells the story of Gracie Gail, a young heroine who sets out to find the White Rider to save her town from Gen. Malcolm Grisham.

Hunt said the first film has a Christian message, with the White Rider as a metaphor for Jesus, with inspiration coming from Revelation 19:11, a verse about Christ returning on a white horse.

“Gracie has to find the White Rider, to bring him back to save everything and one she cares about,” Hunt said, adding that Grisham’s character is a metaphor for how the devil “kills, destroys and takes everything from God’s people.”

In “White Rider Returns,” heroes established in the first film set out in a battle of good versus evil to wrest control from Grisham.

The second film, set between 1864 and 1890, contains a subplot, where people are working together to free Bernie Williams’ family from a slave’s existence under the hands of Grisham and his family.

Slavery becomes a metaphor for people being held in bondage by sin.

It also tells the continuing story of Doug Roanan, a bounty hunter who has a Saul/Paul-like experience in the final moments of “The White Rider.” In the second movie, Roanan learns what his newfound faith means and how it affects his life as he establishes a healthy Christian lifestyle.

“The characters are always on a journey to become better,” Hunt said.

Finding a home on Amazon

When Hunt premiered “White Rider” on Christmas Day 2016, he never imagined the world that awaited through streaming.

Since his first screening, Hunt’s “The White Rider” and “Swing Set” have become available for viewing through Amazon Prime.

“God open the doors and streaming provides one of those endless opportunities,” Hunt said. “It shows what happens if we are willing to put in the work and maintain a professional quality.

“Streaming has taken us to levels of storytelling we did not think were possible.”

Beyond “The White Rider Returns,” Hunt hopes to create a multi-episode television series — also destined for Amazon Prime — that highlights biblical or moral lessons while expanding into the lives of the movie characters.

“It will help us fill in all of the potential storylines for the groups and the characters’ background, which we didn’t have time to fully flesh out or explain in the movies,” Hunt said.

The Hunts also hope to create “Tarnish,” a movie set in present day that addresses a theme of not allowing God-given dreams to become tarnished.

“We are infusing these films with God and Christ and centering positive content with an uplifting message as a way to encourage rather than defeat viewers,” Hunt said. “We want the viewer to leave the film feeling more positive than when they sat down.”

Sean Hunt said those interested in auditioning for any of the projects should send a head shot, resume and link to a dramatic or comedic monologue to huntproductionstudios2014@yahoo.com before the event at Banner Church. He asks those interested to come to the March gathering to learn about the projects.