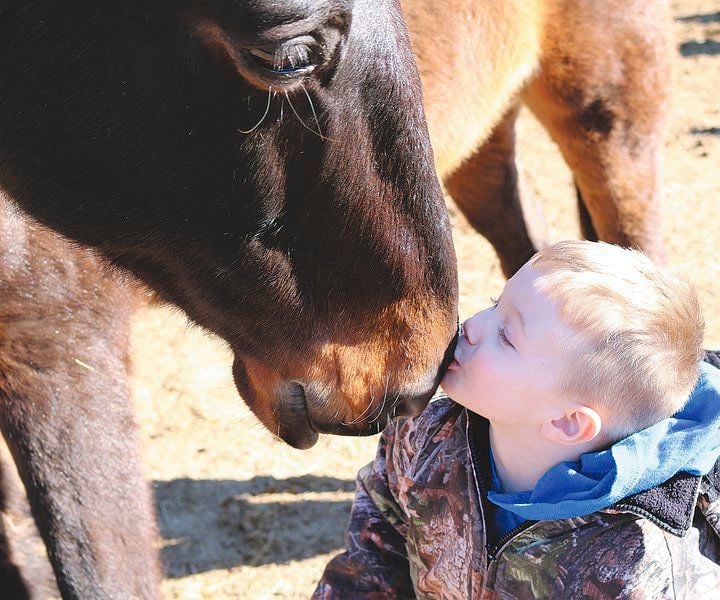 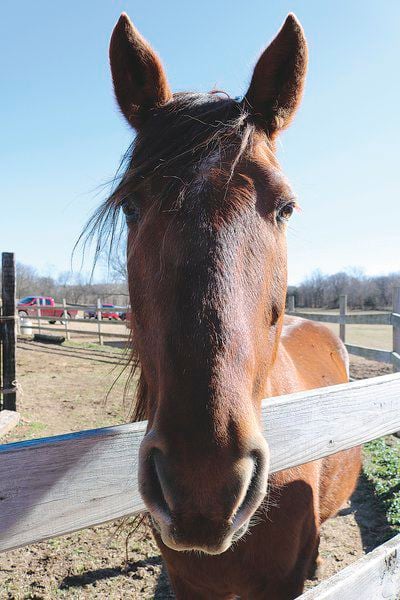 Remington, one of the mustangs on Trinity Circle Ranch, poses for a picture. Courtesy|Kaylea M. Hutson-Miller 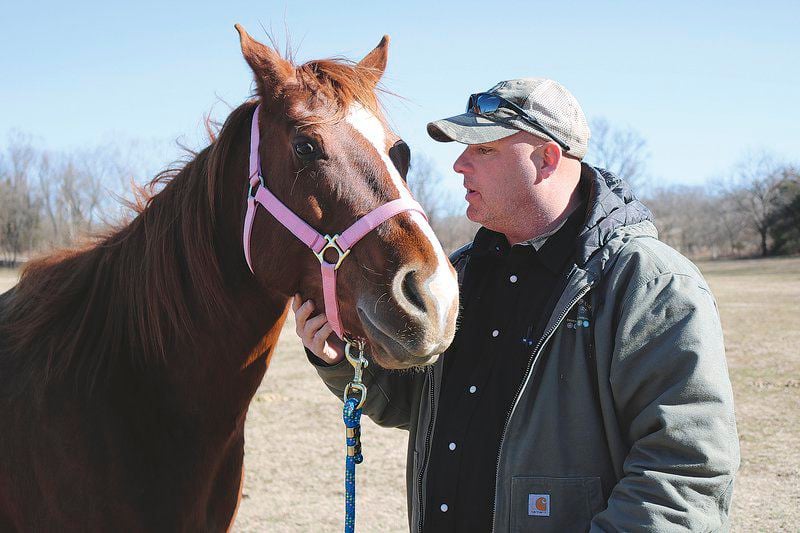 William Lambert shares a moment with Faith, the horse he credits with saving his life when he started spending time at Trinity Circle Horses Healing Hearts.Courtesy | Kaylea M. Hutson-Miller

Remington, one of the mustangs on Trinity Circle Ranch, poses for a picture. Courtesy|Kaylea M. Hutson-Miller

William Lambert shares a moment with Faith, the horse he credits with saving his life when he started spending time at Trinity Circle Horses Healing Hearts.Courtesy | Kaylea M. Hutson-Miller

NEOSHO, Mo. — When William Lambert, 42, got out of the U.S. Army, he found himself looking for ways to reintegrate into society.

Two tours in Iraq and one in Afghanistan with infantry division, Lambert suffered a traumatic brain injury during his second tour thanks to a roadside bomb

While the bomb almost destroyed the truck, hitting the passenger side where he was sitting, Lambert’s injuries were limited to his brain.

Lambert returned to the Joplin area after he got out of the army. The traumatic brain injury left him suffering from depression and anxiety.

It also left him contemplating suicide. Lambert had three separate stays in a Department of Veterans Affairs mental ward as he dealt with the impact of war. VA doctors put him on multiple medications, including 10 different pills for anxiety.

A chance meeting with Dawn Newlan while purchasing peach trees at Orscheln Farm & Home changed the course of Lambert’s life.

Newlan, owner of Trinity Circle Horses Healing Hearts, was sitting at a table, telling people about the ranch’s programs for those suffering from a variety of issues including post-traumatic stress disorder, depression and anxiety.

When Lambert challenged Newlan about what she could do for a veteran, Newlan simply responded, “Come for a visit.”

Lambert admits he was skeptical, but after a couple of visits, he decided to commit to the ranch’s program.

Seven months later, he’s off of all of his anxiety medications and working to reduce others with his doctors. Lambert’s also learned to let go of some of the things bothering him.

Working with the horses helped Lambert learn to relax around his teenage sons and his wife and establish stronger relationships with his family.

“I communicate better with my wife, and my marriage is better,” Lambert said. “It’s helped me all over the place with every aspect of my life.”

For Newlan, Lambert’s story is just one of many she’s heard during the past seven years, as she’s watched people of all ages find healing while working with horses.

“Trauma, no matter how it takes place, leaves a mark on everything it touches,” Newlan said. “We are using rescued horses who have healed from their own trauma to heal the trauma (of humans). Because trauma understands trauma.”

Newlan’s story doesn’t start with purchasing the ranch. It really began when she walked into her bedroom on July 2, 2007, and witnessed her husband take his life.

The moment became etched in Newlan’s mind as she developed PTSD from the trauma of the incident, complete with nightmares, blackouts and more.

A year later, after purchasing her first three mustangs — Katana, Trinity and Comanche — Newlan made a life-changing decision of her own. She would take lessons to know how to handle the 1,000-pound animals.

“In that training, I started my own healing,” Newlan said. During the course of the next few years, she began to spend a lot of time with her horses. She received training as a PATH International certified instructor, an equine specialist in mental health and learning, and an equine service for heroes instructor.

Newlan began offering lessons as well as therapy sessions with her horses for those suffering from emotional trauma or PTSD. She tells the story of a teenage girl, one of the first clients who came to the ranch for help.

Her inner countenance matched her outer look which included Goth clothing and cat-face makeup. Newlan said the girl had previously attempted suicide and was prone to cutting.

After talking with the girl for 45 minutes, Newlan held Zeus as the girl climbed on for a ride.

“She just looked at me and said, ‘I’m doing it,’” Newlan recalled. “I told her she could do anything she wanted to do, if she set her mind to it.”

A month later, Newlan received a text from a friend. The text included a picture of the girl — with hair dyed to a more natural color, fresh makeup and a smile. It also contained the social media post with the following words: “One day one person believed in me and told me I could do anything.”

Newlan said she looked at the text and cried.

In 2014, the ranch officially gained nonprofit, 501(c)(3) status. In the past month or so, Newlan has received clearance to accept Medicaid. Talks are ongoing with the VA to complete a contract to become an official provider for veterans.

The new outlets hopefully will allow Newlan to expand her offerings to children, teens and veterans.

“Horses teach you how to trust, how to open up and to communicate,” Newlan said. “They allow you to relax and release things. If you are sitting at home and have a memory, you will cry and relive it.

“Ninety-five percent of the time, if you are working with horses, and something makes you cry or frustrated, you will work through the memory on the horse and let it go.”

Newlan relies on volunteers to help make the nonprofit a success. Individuals are trained on everything from understanding tack to how to communicate with a horse. A lot of the training centers upon building trust between the horse and the human.

Some volunteers, such as Newlan’s father, Mike Newlan, have worked at the ranch since its inception.

While he jokes his presence came from being “voluntold,” the surgical nurse discovered during his off hours that he likes helping people using horses.

“I find more joy in serving others,” Mike Newlan said. “I’m amazed to watch somebody come and learn, to watch them grow and get well.”

He recruited fellow nurse Stacy Wood to join the volunteer team. Wood said she learned everything about horses from the ground up, having grown up in town.

From side walking, or walking alongside someone who is riding a horse, to groundwork, Wood said she’s found satisfaction in helping at the ranch.

Bobbi Spain, a longtime friend of Newlan, was one of those attending the event as returning volunteer.

“I love helping Dawn,” Spain said. “She helps everybody else; I want to give back to her.”

She brought her son, Brayden, 3, to check out the horses. The youngster giggled as a horse named Dakota licked his hand. The horses often come up to volunteers looking for attention.

Dawn Newlan hopes the ranch will continue to grow bigger and better in the coming year. She’s placed a contract on a new piece of land, which will allow her to expand services.

“We hope this year is extremely big, brighter and blessed,” she said.

For information about Dawn Newlan and the services offered at Trinity Ranch Horses Healing Hearts, visit www.tchhh.org or call 417-455-1200. Additional information may be found on the organization’s Facebook page.

Michael James Crumbliss opened his eyes to a new home on Tuesday, where he was to be greeted by his mother, Peggy Cross Crumbliss, father, James Junior Crumbliss, brother, Patrick Wayne Crumbliss, and other loved ones inside the gates of Heaven. Born on June 9, 1947, he passed into the next …