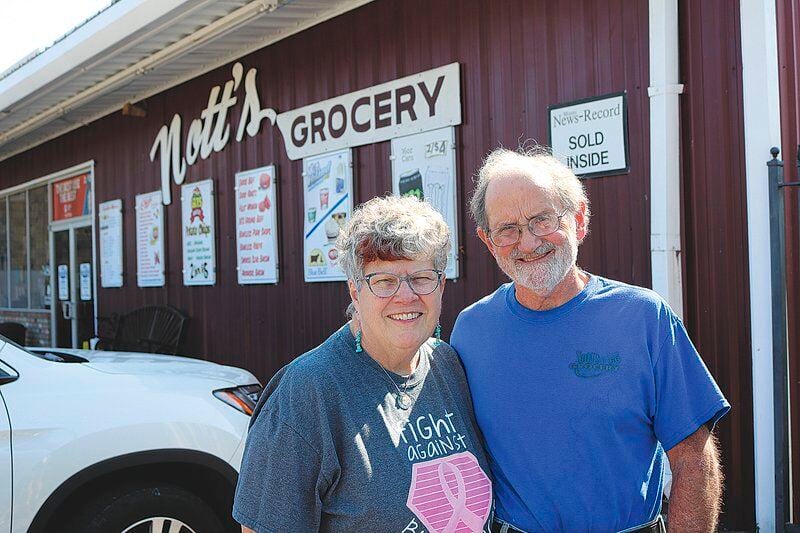 Jim and Susan Nott operate Nott's Grocery on Main Street in Miami, Oklahoma — which has been a family operation, opened by Jim's great-grandparents a century ago. Globe|Kaylea M. Hutson-Miller 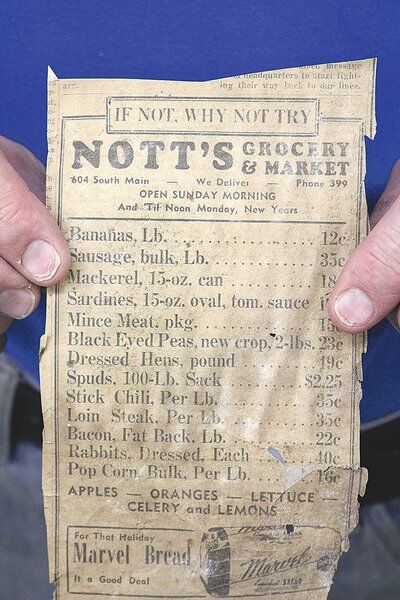 A newspaper advertisement from a long time ago showcasing fresh meats and fruits from Nott's Grocery. A pound of bulk sausage? 35 cents. Globe|Kaylea M. Hutson-Miller

Jim and Susan Nott operate Nott's Grocery on Main Street in Miami, Oklahoma — which has been a family operation, opened by Jim's great-grandparents a century ago. Globe|Kaylea M. Hutson-Miller

A newspaper advertisement from a long time ago showcasing fresh meats and fruits from Nott's Grocery. A pound of bulk sausage? 35 cents. Globe|Kaylea M. Hutson-Miller

MIAMI, Okla. — A century ago, Jim Nott’s great-grandparents, James and Julia Faulkner, decided to open a grocery store on Main Street, right next to the railroad tracks.

Now, 101 years later — the best Jim said he can determine — he continues the family tradition alongside his wife, Susan, operating a small hometown grocery in the same location, at 604 S. Main.

Typically, Jim starts his morning at 4:30 a.m., feeding the cats that live near the grocery store. He jokes the routine began a few years ago when a stray appeared. Since then, the demand for his attention has grown.

Before he opens the door at 7 a.m., Jim spends his time sans customers sweeping floors and stocking shelves.

Once the doors open, he alternates between helping customers, continuing his stocking duties and cutting meat. Typically, he’s out among the shelves and working for another 10 hours or more. With the demand the COVID-19 pandemic has placed on grocery stores, combined with a difficulty to find quality help, Jim and his staff usually put in overtime each day. It’s not unusual for him to clock 15 or more hours, seven days a week.

“I enjoyed it when I was young,” Jim said, explaining how he found himself following the family tradition. “Obviously I still do, 67 years later. I’m not sure if it’s a passion or insanity, but it’s why I like to do it. I truly do enjoy it.”

The Faulkners' daughter, Lily May, married John B. Nott. From that marriage came Bud Nott, who later married Rosemary.

Jim’s grandfather and father worked alongside each other for years. Pictures of the pair standing in front of the first building hang above the coolers along the back wall today.

Jim and his brothers — Ronnie, John and Bill — grew up in the store. Other than the years between 1972 and 1976, when Jim was in the U.S. Air Force or in college, he’s always been a part of the business.

Jim has one son, also Jim, who along with his wife, Holly, and son, Hunter, own and operate a pecan orchard and cattle operation outside of Miami.

Jim and Susan, who grew up knowing each other, connected after Susan began working a second job at the store.

She jokes the couple became an item after a party for employees. Together more than 20 years — which Jim calls a “long courtship” — they married 13 years ago.

The current building, built in 1974, is located a bit farther back from the road from where the original grocery stood for years.

He remembers a time when it was his job to grab one of the 6.5-ounce bottles from the cooler.

Years later, Jim learned the real reason — his grandfather was known to pour a bit of something else into the bottle.

Jim said his parents took the business seriously. In the late 1960s, when Jim was 14 or 15, the couple were able to purchase their first home.

“They were always motivated to better themselves and to provide for us,” Jim said.

While smaller than the big-box competitors, Jim prides himself on offering hometown, friendly service with competitive prices.

One strength for the store, he said, centers around the meat and deli items offered to customers.

“We provide for a lot of people,” Jim said. “We see a lot of foot traffic and customers who may not have accessible cars. We have a lot of loyal customers.”

Those loyal customers, the people Jim and Susan know by first name or at least by face, are what keep the couple going each day.

“I work hard and spend a lot of time here,” Jim said, adding with a smile, “my feet tell me I work hard. I feel fulfillment, providing a service. It’s a give and take. We are here for (our customers), and they are certainly here for us.”

Jim said he plans to retire in 33 years — when he reaches the century mark. Susan jokes she expects him to work right up to his death.

A few years ago, at the request of customers, Jim began offering fresh deli sandwiches. Through word of mouth and repeat customers, the store sells up to 150 custom-made sandwiches per day. Susan said on a busy summer day the number can grow to 300.

“It’s a lot for us because it’s not our primary business,” Jim said. “But it’s become an important component of the business.”

Even during the pandemic, Jim has striven to provide what he calls a good variety of items for his customers – even as things up the delivery chain have stalled.

“We’ve been so busy since COVID-19,” Susan said. “We’ve almost doubled or tripled our business.”

She credits people wanting to be able to “get what they want and leave without hassle” as one reason for the store’s increase in business.

“I’ve had 40 to 50 people tell me thank you for doing this because of the pandemic,” Jim said. “It makes me feel good. Hopefully we show our customers our appreciation.”