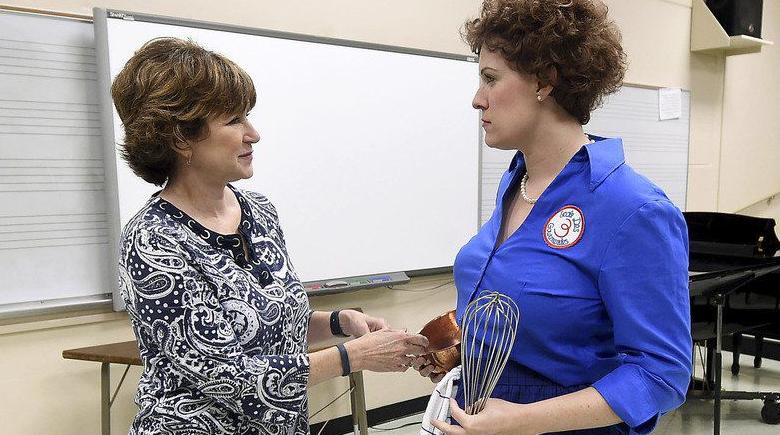 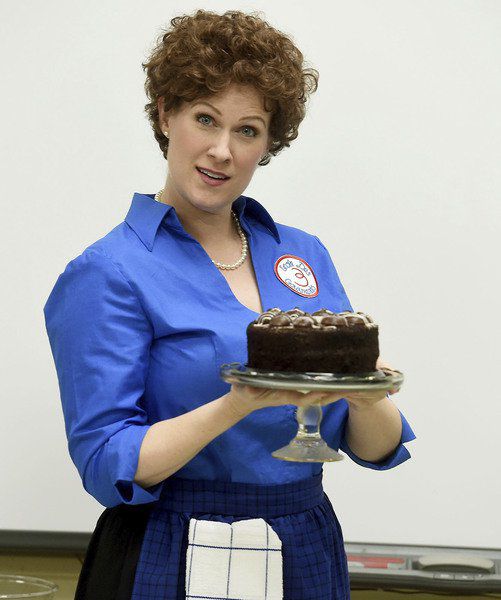 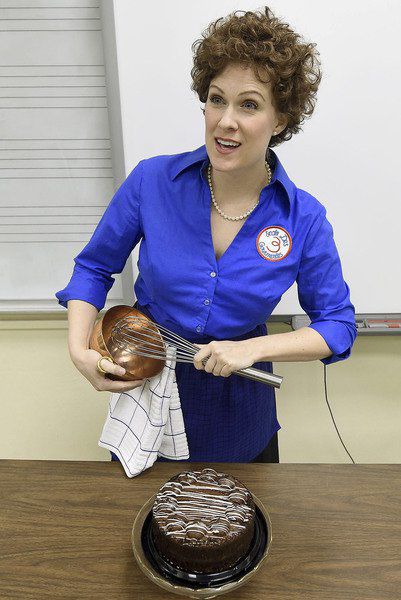 “A party without cake is just a meeting.”

When Diana Allan walked into the room a few minutes later and spied Gerstenkorn fussing over a chocolate cake, she could only gasp out a single word: “Hallelujah.”

“Isn’t she great?” Gregory said to her, smiling.

The opera — which runs from Friday through Sunday, Sept. 29, at three different venues in three different cities — is directed by Allan, Missouri Southern associate professor of voice.

More than 130 professional singer-actors from all over the United States auditioned for the role earlier this year. Gregory called it an “embarrassment of talent.”

But it was local resident Gerstenkorn who most embodied Julia Child.

“(Lisa) was by far the best,” he said. “There was no question who we were going to hire” for “Bon Appetit.”

The play is something of a departure from the more traditional operas, with their multiple acts run length of between three to five hours. Here, Gerkstenkorn “sings” her dialogue, in Child’s distinct accent, to the audience — there are no independent set numbers. All the while, she’s performing simple cooking duties while on stage, among them whisking eggs in a bowl as she creates Child’s special “gateau au chocolat — l’eminence brune’” — a chocolate cake.

“This isn’t like anything I’ve ever done before,” Gerkstenkorn said, who is currently performing as a Filstrup Young Artist with the Tulsa Opera and, earlier this year, traveled and performed with the American Opera Studio in Spain and Portugal.

She added she loves the intimacy of the small stages she’ll be performing on; atypical opera venues such as the Northwood Arts and Event Center in Neosho, Joplin Avenue Coffee Co. and The Woodshed in Carthage on Sunday.

Unlike Dan Aykroyd’s famed take on Child during a “Saturday Night Live” sketch in 1978, Allan said “Bon Appetit” shows nothing but respect for the woman who singlehandedly introduced French cuisine to the American public in the 1960s.

“This is not a caricature of Child,” she said. Rather, “It is celebrating her ability to laugh at herself.”

This 30-minute show is based on two episodes from Child’s second WGBH-TV season: “The race between the whisk” and “the electric beater comes out of a different cake.”

“This is a really fun opera; I saw it a couple of years ago in Kansas City,” Gregory said. “I’ve always been a huge fan of Julia Child, so this will be just perfect.”

Tickets, which can be purchased online at heartlandoperatheatre.com, are $15 in advance, $20 the day of show and $10 for students.