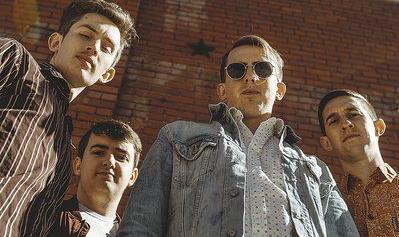 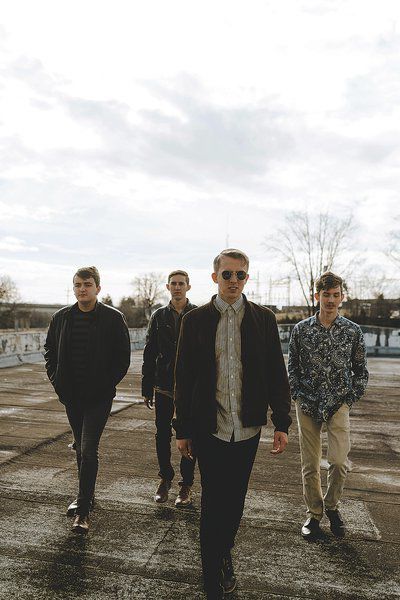 A December 2018 chance to open for an indie band’s concert in Tulsa became a defining moment for four Joplin musicians.

The group now known as Fox Royale was asked to fill in at the last minute for the group set to open the Panic Vertigo Tour featuring The Wrecks.

Standing together on stage, the four men — Nathan Hurley, Caleb Hurley, Evan Todd and Davis Drake — did something unusual. They opened the show standing around a microphone doing an acoustic four-part barbershop harmony-style song.

Their style, and the way they approached music, gained the attention of members of The Wrecks — which led to a meeting with the group’s manager in February 2019.

Since then, the group has rebranded themselves, defining their musical style and writing and recording several songs.

In October, the group signed with War Road Music, owned by the brother-sister duo Richard and Stefanie Reines. Fox Royale’s first single, “Don’t Call Me When You’re Lonely,” was released on March 6.

The group planned to launch a tour of the West Coast in May, but plans are on hold because of the COVID-19 outbreak.

So the group is spending time in their respective home studios in Joplin, working to add to their music catalogue. They currently have 10 songs recorded, ready for release.

Before the group became known as Fox Royale, or even their first group name — Guys on the Bus — the four guys got to know each other as members of a high school orchestra, known as Highest Praise, connected with Ozark Christian College.

“We all hung out doing music after school,” Nathan Hurley said, adding the group got serious about their craft in 2017.

The four friends first launched their independent musical efforts as Guys on the Bus. Hurley describes their first group as a mixture of folk music and alternative rock.

Hurley said they signed a contract with themselves, outlining their commitment to the band and its music.

Signing with War Road Music brought a chance to rebrand themselves in order to define where they planned to go in the future. It also let the group sign a new contract with themselves, outlining their goals and commitment for the next four years.

The name Fox Royale was picked as a nod to the group members’ love of movies.

“It sounds like it was a fictional hotel which was fancy and nice during its day, but now is a bit rundown,” Hurley said.

Todd plays the drums, Drake the bass, Caleb Hurley the keyboard and Nathan Hurley the electric guitar. All four sing. They share equally in the creation of their songs.

The new group has an “anthemic, jangly indie-rock” sound that Hurley compares to Cold War Kids, Cage the Elephant and Vampire Weekend.

“It’s loud but positive and upbeat,” Hurley said. “It has lots of vocals, harmony and lots of hooks. We try to make sure every song has something that gets stuck in people’s heads.”

The first single, “Don’t Call Me When You’re Lonely,” grew out of Hurley’s conversations with his wife while they were on the road. Written in just six hours, the song focuses on the couple’s attempt to stay connected.

“I wasn’t talking to her enough,” Hurley said. “This is all about making the effort.”

The group hopes to perform a series of concerts once travel and gathering restrictions are lifted. Hurley said performing is “like nothing else.”

“It’s just pure adrenaline and super fun,” he said. “You are performing for (a group) of strangers who are dancing and enjoying your music. It’s sometimes a weird way to connect with strangers.”

Hurley said performing gives him a chance to visit new places, joking sometimes the music justifies his love of travel.

He said traveling as a group is nice because they have other people to share in the experiences.

Joplin will remain their home base for the time being. Each member has married in the last few years.

“We started here, it was where we had our first big show,” Hurley said. “We have big fans and are super connected to the area.”

The group uses several digital platforms, including Spotify and Pandora as well as an Instagram and a Facebook page under the name “We Are Fox Royale.”

They have a concert set for late April at Joplin Avenue Coffee Company, if the performing restrictions are lifted.

“We appreciate the support from our fans,” Hurley said. “We’re just trying to stay focused on our work.”