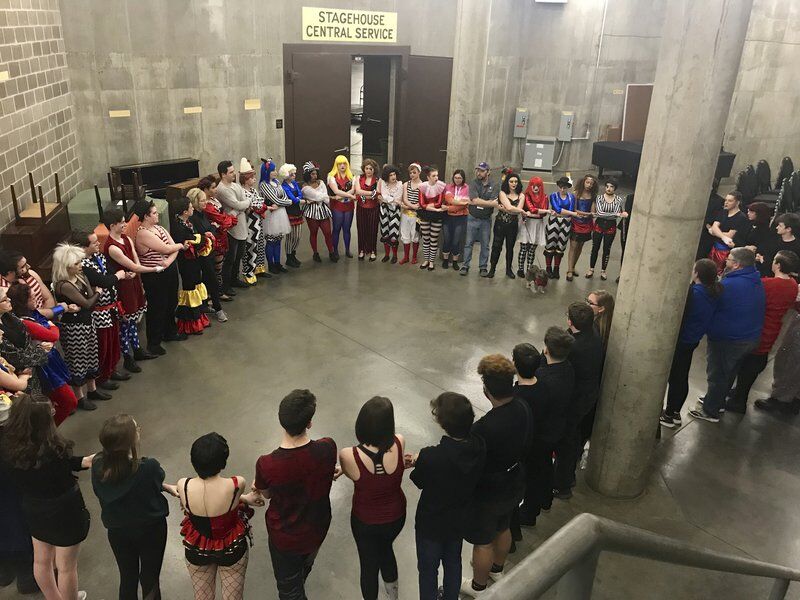 Pittsburg (Kan.) High School theater director Greg Shaw gives his “circle time” speech just before the curtain rises on the musical “Pippin” in January at the Kansas State Thespian Festival in Wichita, Kan. Shaw traveled to the competition after he had brain surgery in December.Courtesy | Pittsburg High School 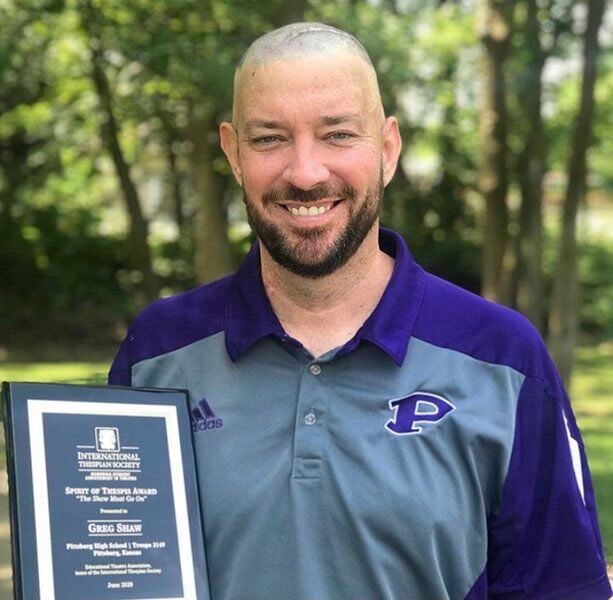 Greg Shaw poses with an award presented to him earlier this year. Courtesy | Pittsburg High School 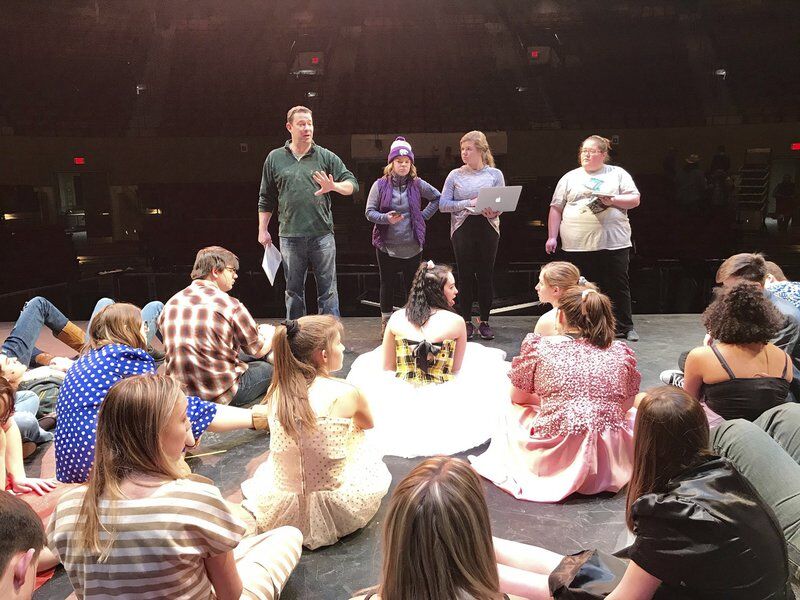 Pittsburg (Kan.) High School theater director Greg Shaw gives his “circle time” speech just before the curtain rises on the musical “Pippin” in January at the Kansas State Thespian Festival in Wichita, Kan. Shaw traveled to the competition after he had brain surgery in December.Courtesy | Pittsburg High School

Greg Shaw poses with an award presented to him earlier this year. Courtesy | Pittsburg High School

Pepsi and Snickers bar in hand, Greg Shaw speaks with a booming voice that is a staple in the halls of Pittsburg High School — especially around the school’s performance stage and rehearsal areas.

For the past 13 years, Shaw has built a theater program that includes multiple productions and provides Pittsburg students the opportunity to perform on the main stage at the State Thespian Festival and the International Thespian Festival. Graduates of the program are working professionally throughout the theater community.

Shaw has been recognized twice in recent months — first with the International Thespian Society’s Spirit of Thespis Award this summer and then with an induction by Kansas Thespians, a chapter of the Educational Theatre Association, into the 2021 Kansas Thespian Hall of Fame this month.

For a teacher who pushes himself to give all he can to his students and craft, the awards, his colleagues say, pay tribute to the dedication he’s poured into the program.

“This honor is bestowed to individuals who strive for excellence in theater education, go above and beyond expectations in developing a theater program of excellence, and have impacted Kansas Thespians in amazing ways,” said Jennifer Morgan Beuchat, a member of the organization’s state board of directors. “We’re proud to announce Greg Shaw as an inductee.”

Shaw, who taught at PHS for 13 years, continued directing last year as long as he was able before taking a leave of absence this fall. He is receiving care for glioblastoma, a form of brain cancer.

During the past decade, Shaw has grown the school’s theater offerings not only in the number of students but also in program offerings.

He increased the number of productions from one play a year to multiple productions, including developing a platform for students to discuss and perform a wide range of plays dealing with social issues including teen suicide, school violence, eating disorders and more.

“He didn’t just do easy productions,” said Jason Huffman, Shaw’s long-term substitute and friend. “It had to have meaning and fit the kids and — sometimes to the dismay of the administration — push the boundaries. He likes to make people think.”

Huffman said Shaw’s teaching style mirrors that of a coach in sports, with Shaw standing on the sidelines or in the classroom cheering on his students and providing support. He knows how to help students achieve the top level of success without breaking them down.

“He always pushed students to be the best they can be, and never asked for less than what he was willing to give,” Huffman said. “He wanted them to give the best performance, use the best lighting design. It was all about making the production better — he pushed (us) to a high level of excellence all of the time.”

Under Shaw’s direction, the PHS Theatre program earned more 40 Jester Awards — an honor for Kansas high school musical theater — since 2016, including best direction of show for “Shrek,” “Seussical” and “Little Mermaid.” Those awards are presented by Music Theatre Wichita.

“He would say, ‘If something falls, pick it up,’ and ‘if someone falls, pick them up,’” Huffman said, describing how Shaw would encourage his students to think beyond themselves, in order to care for others.

Huffman’s relationship with Shaw started when Shaw began pursuing a master’s degree in theater education from Pittsburg State University. At the time, Huffman was an adjunct instructor in the department.

The pair became friends, and eventually Huffman joined Shaw at PHS working on the tech side — lighting and sound — as well as serving with Shaw on the board of directors of Pittsburg Community Theatre.

When Shaw’s illness caused him to step away from teaching, Huffman was the one Shaw tapped to take care of the program and students.

“I don’t know if the man ever slept,” Huffman said. “For me to fill those footsteps is kind of exhausting. He deserves all of the awards he’s gotten. ... This year is still Greg’s program, and we’re doing it on Greg’s level.”

Shaw and his wife, Angela Shaw, have two daughters. At 18, McKenna, a freshman at the University of Alabama-Birmingham, is pursuing a career in musical theater. Marley, 10, is exploring her future options by taking part in theater, dance, athletics and more.

Last summer, Marley joined the cast of “The Lion King Jr.,” directed by her father in the Just Off Broadway Theatre program for Pittsburg students.

Angela describes the summer initiative, which serves as a “feeder program” for PHS’s theater department, as one of her husband’s greatest legacies because it allowed younger students to get a taste of theater while encouraging older students to serve as counselors, stage managers, costume design and more.

Angela Shaw jokes that her daughters were born into the theater, spending much of their lives around various productions.

Shaw’s undergraduate degree was in human resources. When Angela’s medical residency brought her to Pittsburg, he decided to pursue a master’s in theatre.

Family trips often revolved around New York City and how many Broadway shows could be taken in. Angela said a trip to New York with Shaw meant at least two shows a day. She said he would have done more if they would have let him.

“He loves it when the story lines are complex and the music is beautiful,” Angela said. “He loves finding an exceptionally talented cast, and finding the perfect cast to do a show, along with a great ensemble. For him, that was the perfect show.”

She hopes her husband’s students will continue to have a passion for theater and the power it holds to educate, not just entertain.

In May 2019, Shaw sustained a traumatic brain injury after a fall. In December 2019, he was diagnosed with brain tumors. Earlier this summer, after a procedure, Shaw suffered a stroke that left him paralyzed on the right side of his body. The stroke also affected his ability to talk.

Like Huffman, Angela said her husband has always strived to instill in his students a spirit of togetherness, saying everyone works together to pick things or people up during a moment of need.

“Right now, he’s the one needing help,” Angela said. “The community, school, students have been so supportive of us and helped us get through the past year and half.”

Angela said her husband continues to deal with the side effects from the stroke, but he is doing well, appreciating the thoughts, messages and videos sent to him by his many friends and students.

“He’s still the same old Greg,” Angela said. “He just might be down for a while. The thoughts, messages and videos have perked him up and pushed him to be stronger, to continue fighting the fight he is on now.”