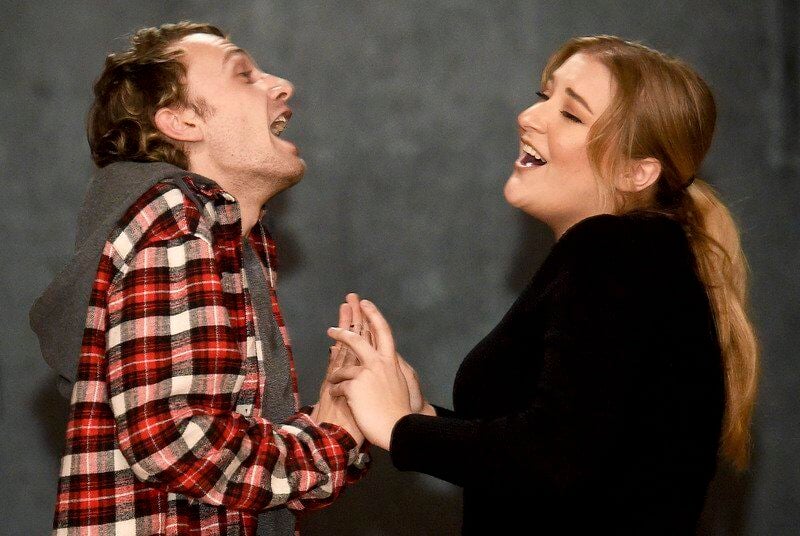 From the left: Jarrett Little and Michaela West rehearse their roles for the "The Nightman Cometh," a benefit show for JOMO Pride at Studio 124. Globe | Laurie Sisk 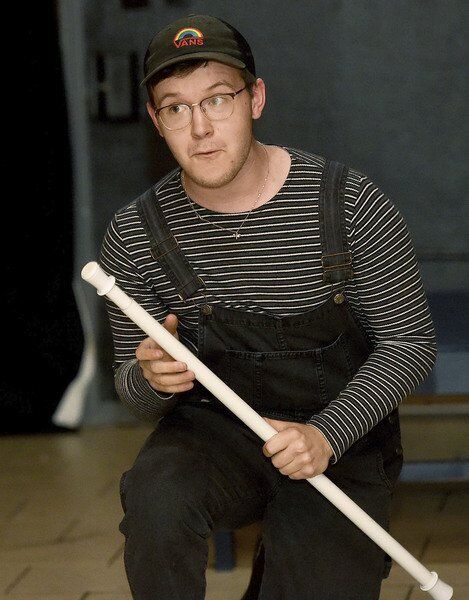 Corbin Chaffin rehearses his role for the "The Nightman Cometh," a benefit show for JOMO Pride at Studio 124. Globe | Laurie Sisk 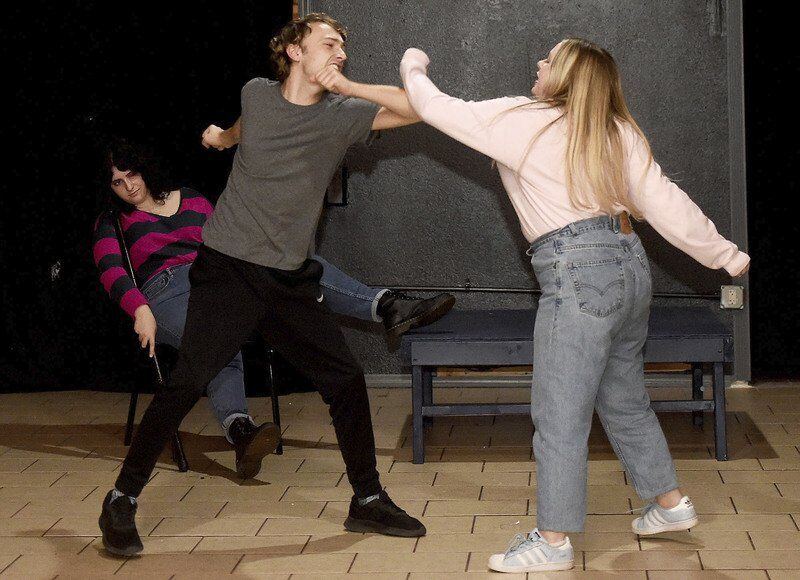 From the left: Sophie Stoebel, Jarrett Little and Allison Dodge rehearse their roles for the "The Nightman Cometh," a benefit show for JOMO Pride at Studio 124. Globe | Laurie Sisk 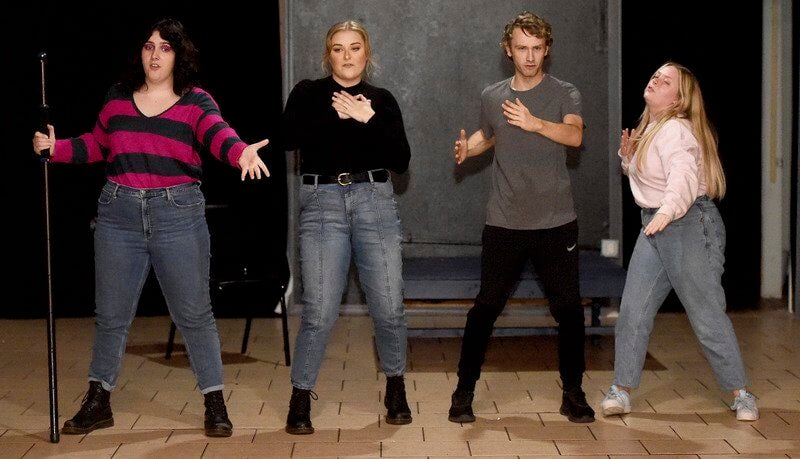 From the left: Sophie Stoebel, Michaela West, Jarrett Little and Allison Dodge rehearse their roles for the "The Nightman Cometh," a benefit show for JOMO Pride at Studio 124. Globe | Laurie Sisk

From the left: Jarrett Little and Michaela West rehearse their roles for the "The Nightman Cometh," a benefit show for JOMO Pride at Studio 124. Globe | Laurie Sisk

Corbin Chaffin rehearses his role for the "The Nightman Cometh," a benefit show for JOMO Pride at Studio 124. Globe | Laurie Sisk

From the left: Sophie Stoebel, Michaela West, Jarrett Little and Allison Dodge rehearse their roles for the "The Nightman Cometh," a benefit show for JOMO Pride at Studio 124. Globe | Laurie Sisk

It’s a funny moment in the final episode of the fourth season of the hit comedy show, “It’s Always Sunny in Philadelphia” — a rock opera put on by the show’s five main characters that, incomprehensibly, involves a little boy, a princess, a toll troll and, of course, the evil Nightman with “sick cat eyes.”

But there's something about this fictional play — called “The Nightman Cometh” — that has caught the fancy of the show’s fans, so much so that it is now being embraced as a standalone production inside playhouses across the nation, including Joplin’s Studio 124.

The 20-minute play is scheduled to take place at 7:30 p.m. Friday and Saturday.

“I actually have been a fan of the show for a long time,” said the play’s director, Michaela West, though she admitted moments later with a chuckle that she was “probably watching at too young of an age.”

"It's Always Sunny," television’s longest-running live-action comedy series, isn’t for the faint of heart. Each of the show's five main characters display unethical but hilarious behaviors, often conspiring against one another for personal gain, vengeance or simply for the pleasure of watching another’s downfall.

“I’ve always had the idea of doing ‘The Nightman Cometh’ — I remember watching (the episode) and thinking, ‘This would be so easy to put on,’” West said.

West’s dream to perform the play took a huge leap forward early this year when Studio 124 opened, offering her the perfect stage for the Dayman’s saga to come to life. Next, she discovered the show’s creator, Rob McElhenney, wasn’t charging folks for the rights to put on the rock opera.

“Someone tweeted (Rob) about wanting to do put on the show and how much would it cost ... and he basically said, ‘No, you don’t have to pay me royalties ... (adding jokingly) if you make a million dollars, just send us our cut,” West said. “So it won’t cost us anything to do the show.”

The cast includes: Jarrett Little (The Little Boy/Dayman); Allison Dodge (The Nightman); Sophie Stoebel (The Troll); Corbin Chaffin (Charlie); and Briana Blair (The Waitress), while West plays The Princess. Crew members include Jane Moore and Luke Bobbett. They will perform such hilarious and purposely cringe-worthy songs such “The Dayman” — fighter of the Nightman, champion of the sun and master of Karate and friendship for everyone — “Tiny Boy, Little Boy, Baby Boy” and “Troll Toll.”

"I am a fan of the show, although not a super fan like our director," said Dodge, a veteran actor. "I’m very excited to play the Nightman. It will definitely be different from any other role I’ve ever had, but I’m 100% up to the challenge and excited."

Admission is free, West said. However, cash and electronic donations will be accepted on behalf of JOMO Pride Inc., which provides safety, support, outreach and networking opportunities for Joplin’s LGBTQ community.

“Because the creators of the show are very big (supporters of gay rights) and participate in Philadelphia Pride every year, I thought it would be nice to use this as a fundraiser for them,” she said. JOMO Pride “is always looking for donations.”

Capacity for both performances will be limited to 40 seats; masks are required, and tickets must be reserved.

Details: Tickets can be reserved through the link below: https://www.signupgenius.com/go/10c0d48a5a822abfac25-thenightman.

Four different student performance ensembles will be showcased through virtual concerts broadcast by the Bicknell Family Center for the Arts in cooperation with the Pittsburg (Kan.) State University music department.

The concerts will be livestreamed or streamed at facebook.com/bicknellcenter, at pittstate.tv, and at youtube.com/pittstate. There will be no live audiences.

For those who miss the stream, the concerts will be available for viewing on demand at pittstate.tv. The concerts also will be aired on CAPS 13 TV at a later date.

• 7 p.m. Tuesday: Nov. 17: The PSU Opera Workshop Class concert will consist of individual recordings of students each singing one or two arias accompanied by recorded tracks.

• 7:30 p.m. Wednesday: The PSU Jazz Ensemble concert will include a mix of contemporary and traditional jazz tunes.

• 7:30 p.m. Thursday: The PSU Wind Ensemble will perform a virtual concert called "Sneak Peek," which will be a preview of what the ensemble will be performing in February at the 2021 Kansas Music Educator’s State Convention.