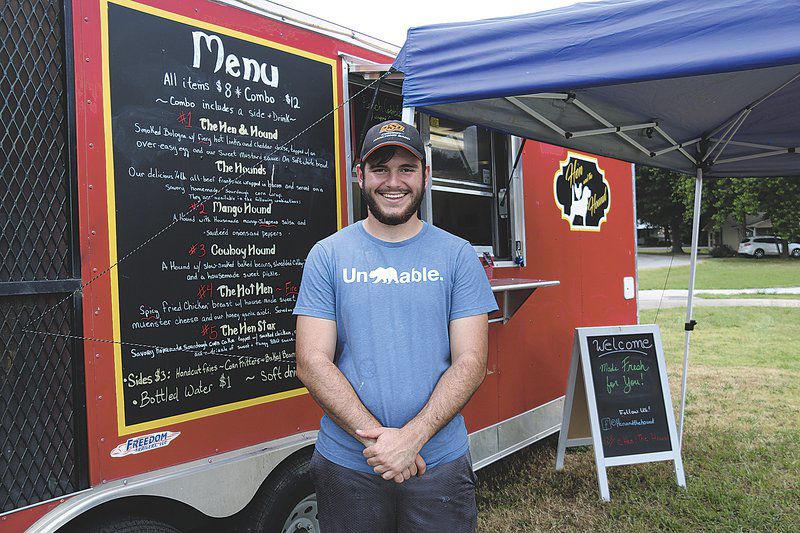 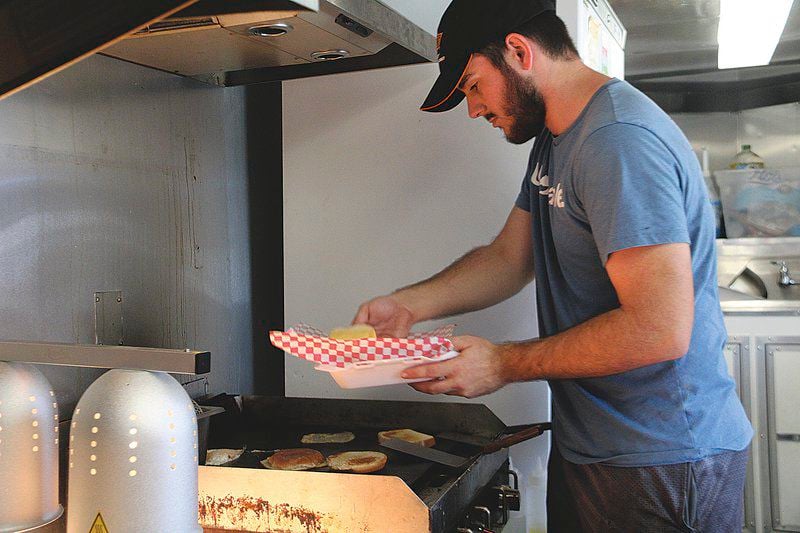 Mason Allen (above) cooks. Allen, 19, launched a food truck (below) with a menu of his own chicken dishes and specialty hot dogs — hounds — including his Mango Hound, complete with mango-jalapeno salsa, sauteed onions and peppers. His side item, corn fritters, has become a top requested item. Globe | Kaylea M. Hutson-Miller

Mason Allen (above) cooks. Allen, 19, launched a food truck (below) with a menu of his own chicken dishes and specialty hot dogs — hounds — including his Mango Hound, complete with mango-jalapeno salsa, sauteed onions and peppers. His side item, corn fritters, has become a top requested item. Globe | Kaylea M. Hutson-Miller

GROVE, Okla. — For most college freshmen, life away from home is filled with exploring newfound freedoms. Starting a business is furthest from their mind.

Mason Allen, 19, challenges that description. The now sophomore at Oklahoma State University spent much of the past few months, thanks to COVID-19, launching his food truck Hen & The Hound. Allen serves up a variety of chicken and all-beef hot dog dishes — all based on his own recipes.

“Half of this is an experiment: Would I want to do this on a bigger scale?” Allen said. “The pandemic helped a lot, because I was able to be home to get a few things done on the trailer.”

Allen initially planned to go into music education. His experience as the drum major for the Pride of Grove Ridgerunner Band shaped his future.

Then a class in food studies changed everything. Allen learned to cook and found he enjoyed testing new recipes and making his own sauces.

“I started small with stir-fries and such,” Allen said. “Cooking, coming up with my own recipes lets me show creativity.”

Allen began to dream about opening his own restaurant or going into the hospitality/tourism industry.

As an OSU student, Allen began to pursue a hospitality, tourism and management degree. A class on entrepreneurship reinforced Allen’s desire to run his own establishment.

“It taught me an entrepreneurial attitude, to keep going with it,” Allen said. “Running a business like this is customer-based. It’s making sure they are getting what they want. It’s also making sure your idea is really great and not just something you like.”

Even before the pandemic began, Allen began working with a friend to develop a snow cone shack in Grove as a way to earn income during the summer.

“I wanted to own something of my own,” Allen said. “At first I just wanted to prove I could get through all the small steps to get to this.”

As he researched the Grand Lake market, and talked with other food truck owners, Allen’s idea began to evolve. He looked for a niche to set him apart from other established businesses.

“You need to find where you fit in and know people will be attracted to what you are selling. You want to be creative and not copy someone else’s idea. Then try to grow something to be profitable.”

With the help of his parents, Kristy and Darren Allen, Allen purchased a 27 foot truck that came complete with a smoker.

“I couldn’t do it without their support,” Allen said. “They have been very supportive.”

Instead of flavored ice, Allen decided he would smoke meats and use them for his entrees, saying “it opened up a lot more possibilities.”

He focused on chicken dishes and specialty hot dogs — hounds — after talking with friends. Google surveys helped him decide what to name his entrees.

A survey for side items led him to add corn fritters — which has become a top requested item. Rather than use buns for the hounds, he uses a sourdough corncake modeled after a pancake.

“We try to put a twist on everything,” Allen said, describing his Mango Hound, complete with mango-jalapeno salsa, sauteed onions and peppers.

Initially, Allen thought he would remain stationary, tethered to a building owned by his grandparents, Butch and Nancy Allen. A chance to work the Toes In The Grand Festival earlier this month, led Allen to invest in a generator.

When Allen opened in mid-May, he began by offering take-home meal of smoked chicken and bologna, with sides. He is now open for lunch, offering full entrees.

Allen plans to continuing serve meals until he returns to OSU in mid-August. He’s thought about taking the truck to Stillwater, but worries about juggling managing responsibilities with a full-time school schedule.

Allen jokes running a food truck has taught him numerous things - including the need to write things down. He’s also learned the power of flexibility.

“If things aren’t going well, you need to try something different,” Allen said.

So far, Allen said, this spring has proven successful for his new business. He’s been able to pay himself and two colleagues wages.

“I’m slowly building the business,” Allen said. “My goal is to pay off the trailer in two to three years. So far it’s looking fairly promising amidst the COVID pandemic.”

For now, Allen is focused on providing a unique food experience for people.

“I want people to come eat something different, something they cannot get somewhere else,” Allen said. “I hope they will be open minded, because the ([flavors) do go together.”

Allen’s favorite complement from a customer came earlier this month at Toes in the Grand.

“A person came by and said he was so excited, because I had ‘foodie food,’” Allen said. “I have food for people who want to have some sort of adventure with their food.”