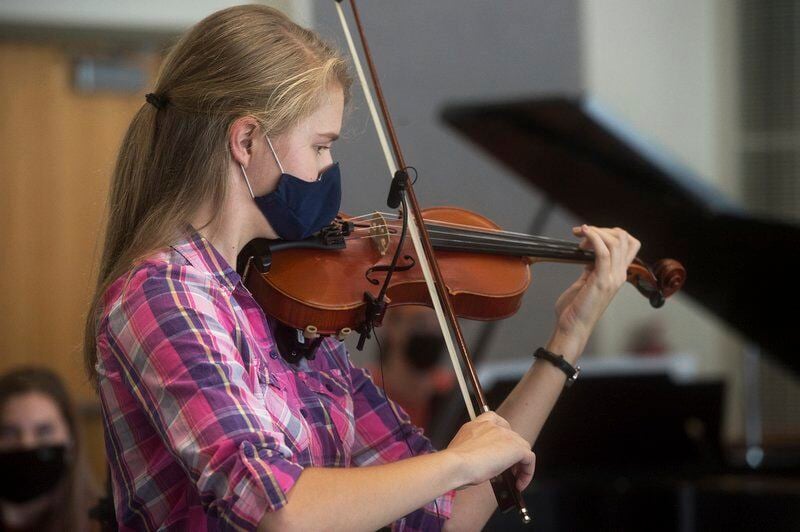 Edith Sigler plays “The Devil Went Down to Georgia” on Wednesday with the Pittsburg State University Jazz Ensemble at the Bicknell Family Center for the Arts. Globe | Roger Nomer 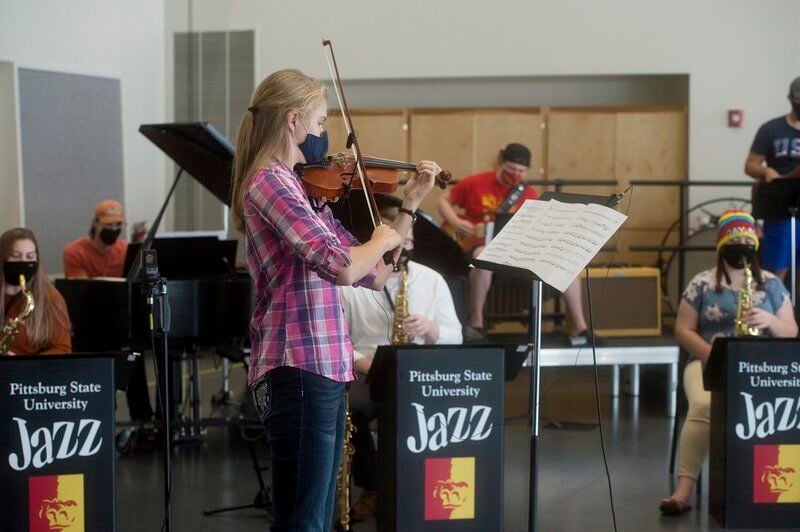 Edith Sigler plays "The Devil Went Down to Georgia" with the Pittsburg State University Jazz Ensemble at the Bicknell Family Center for the Arts on Wednesday. Globe | Roger Nomer 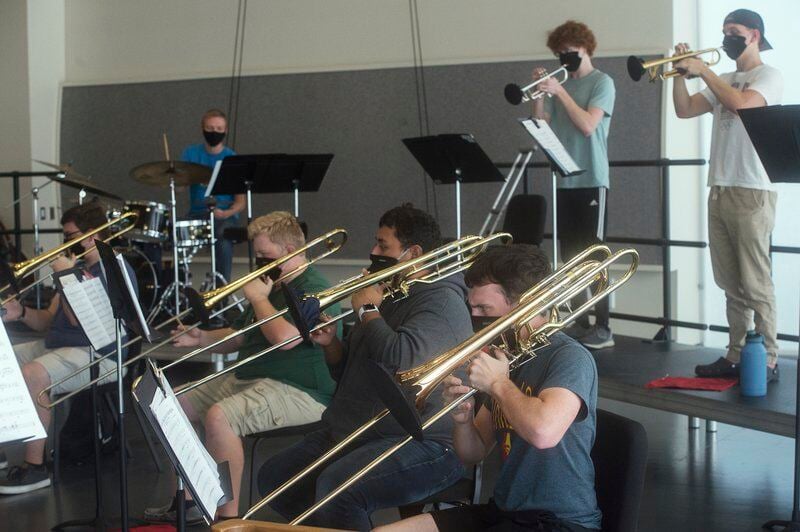 The Pittsburg State University Jazz Ensemble plays “The Devil Went Down to Georgia” during rehearsal on Wednesday at the Bicknell Family Center for the Arts. Globe | Roger Nomer 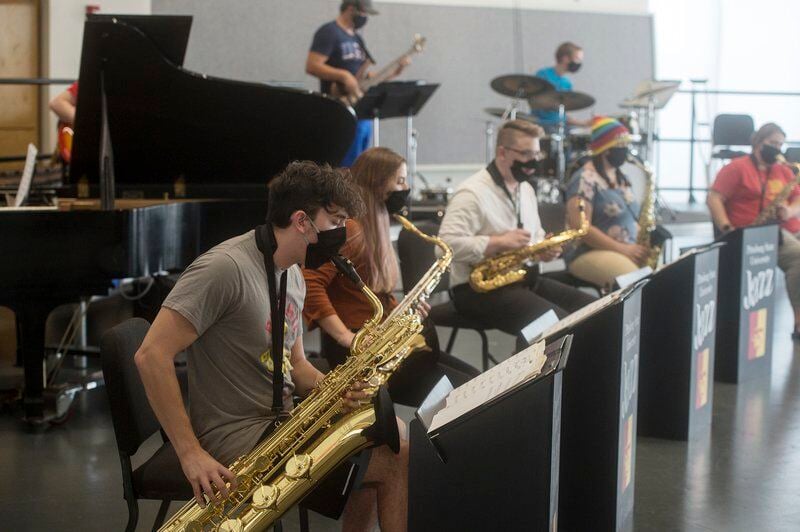 The Pittsburg State University Jazz Ensemble plays "The Devil Went Down to Georgia" at the Bicknell Family Center for the Arts on Wednesday. Globe | Roger Nomer

Edith Sigler plays “The Devil Went Down to Georgia” on Wednesday with the Pittsburg State University Jazz Ensemble at the Bicknell Family Center for the Arts. Globe | Roger Nomer

Edith Sigler plays "The Devil Went Down to Georgia" with the Pittsburg State University Jazz Ensemble at the Bicknell Family Center for the Arts on Wednesday. Globe | Roger Nomer

The Pittsburg State University Jazz Ensemble plays “The Devil Went Down to Georgia” during rehearsal on Wednesday at the Bicknell Family Center for the Arts. Globe | Roger Nomer

The Pittsburg State University Jazz Ensemble plays "The Devil Went Down to Georgia" at the Bicknell Family Center for the Arts on Wednesday. Globe | Roger Nomer

PITTSBURG, Kan. — With the prospect of limited performances because of the ever-changing face of the COVID-19 pandemic, musicians at Pittsburg State University are working to find a way to get their musical voices heard by the public.

Members of the Pittsburg State University Jazz Ensemble, led by Robert Kehle, professor of music and director of the jazz band program, will present a livestreamed, virtual concert at 7:30 p.m., Wednesday, Sept. 30, via www.pittstate.tv and Facebook.com/bicknellcenter.

During the concert, members will wear special performance masks designed to work with the various instruments, and utilize bell covers for the horns. Students will also use spread-out seating as they perform in the empty Linda and Lee Scott Performance Hall at the Bicknell Center.

Kehle said in some ways, the group was left to present their music in this way with little choice. Unlike bigger musical groups, the jazz band is small enough to do a livestreamed concert rather than a series of small group recordings.

“With the virus, live audiences are a problem, so we make do with what we can,” Kehle said, adding that while other live performances — including sporting events — have cutouts of people in the seats and use piped in crowd noise, the band will simply focus on the music.

“It’s important for our students’ musical growth to give performances, even if the audience is virtual,” Kehle said. “The students are very versatile and want to perform even if there is no live audience. The concert is the same. I told them I will announce, and we will perform as if there are people in the seats.”

How it came about

Kehle said members of the PSU music department spent time during the summer months on how to deal with performing and the virus.

“There were some major studies done that really set the stage for how musicians need to deal with the current situation, and they have been adopted nationally,” Kehle said.

For musicians with an instrument utilizing a mouth piece, slotted masks are a must.

“When the player puts their instrument down a flap falls shut so the mouth is covered,” Kehle said. “The nose is always covered.”

“We added a second layer to meet the standards,” Kehle said. “Bell masks have been around a long time and were often seen in marching bands. Now they have another use.”

The space within the Bicknell Center, allows the band to set up using social distancing measures.

“The standard set up is the three horn sections back to back,” Kehle said. “Well even with bell and face masks that is just not good. So we are spread out and socially distanced. It makes a more difficult job for the students but much better than the alternative.”

The concert will include a variety of music from known composers and bands, all designed to give the players an obtainable challenge.

The playlist includes traditional jazz, bluegrass and more, ranging from Count Basie’s “Blues in Hoss’ Flat,” to the Buddy Rich version of the Beatles classic, “Norwegian Wood.” It will also include a few Latin tunes, tossed in with Stan Kenton’s version of the classic “But Beautiful” and new tunes such as “14th Street Shuffle.”

The crowning moment during the concert, Kehle said, is the performance by Edith Sigler, senior music performance — violin major.

Sigler, a trained classical violinist, is typically the pianist for the jazz band. During Wednesday’s concert, she will play a custom arrangement of “The Devil Went Down to Georgia” by Charlie Daniels.

“Edith not only plays excellent classical violin but also plays a mean fiddle, bluegrass style,” Kehle said. “I thought it would be great to feature her on a tune and of course ‘The Devil Went Down to Georgia’ is a classic.

After Charlie Daniels died, Kehle commissioned Jeff Bunnell, a Los Angeles trumpet player and a composer, to make a piece for the jazz band.

Bunnell performed at PSU in March as part of the Tome Kubis Big Band and struck up a friendship with Kehle.

“It became a natural collaboration,” Kehle said. “He had never done a bluegrass tune for a jazz group so was intrigued by the idea. The arrangement is great, and of course Edith is phenomenal.”

Sigler said the arrangement is different from most fiddle tunes because different instruments play the parts which are not the main fiddle themes.

In this case, a saxophonist plays the part of the devil, while Kehle voices the speaking parts.

“It’s really fun, and I enjoy it because it has lots of energy,” Sigler said. “I’ve always wanted to learn a version (of the song). But unless you have a band, it’s not an easy piece to play solo. I’m glad to have an opportunity to learn it.”

Sigler, a senior at PSU, is a 2017 graduate of Carl Junction High School. An accomplished musician, she began classical violin training at the age of 3 with Dr. Kexi Liu in Joplin.

She’s performed as both a classical violinist and as part of her family’s bluegrass group, the Harmony Hills String Band. The group is made up of Sigler’s parents, Dr. Kimra Ross and James Sigler, her grandparents Elizabeth and William Ross and her brother, Glenn Sigler.

While she’s focused on musical studies during her time in college, Sigler has minored in chemistry and physical science to fulfill her other dream — applying for medical school and following in her mother’s footsteps.

“I’ve been around medicine all of my life,” Sigler said, “and music has always been there my whole life.”

If she determines medicine is not her career path, Sigler said becoming a university professor teaching music is her other career option.