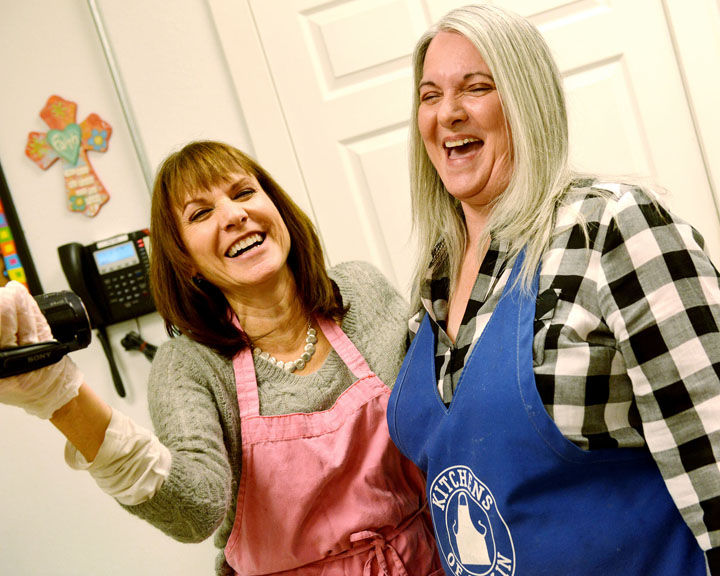 Lu Ann Cahn, left, and Cindy Moore share an interview during Cahn's visit to Joplin and Watered Gardens on Tuesday. 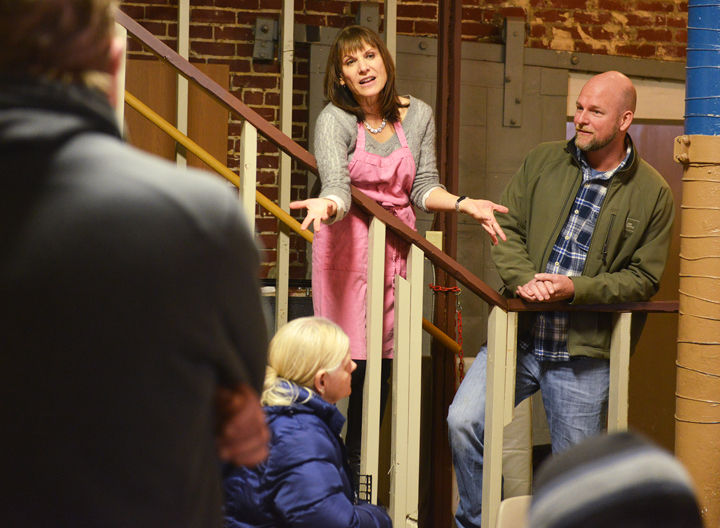 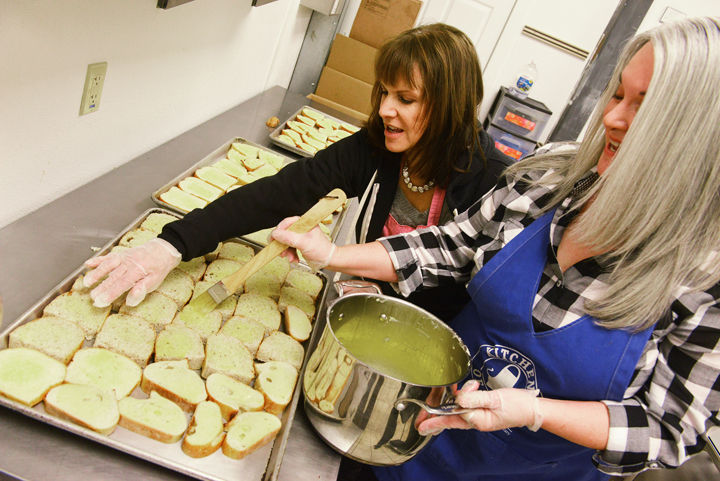 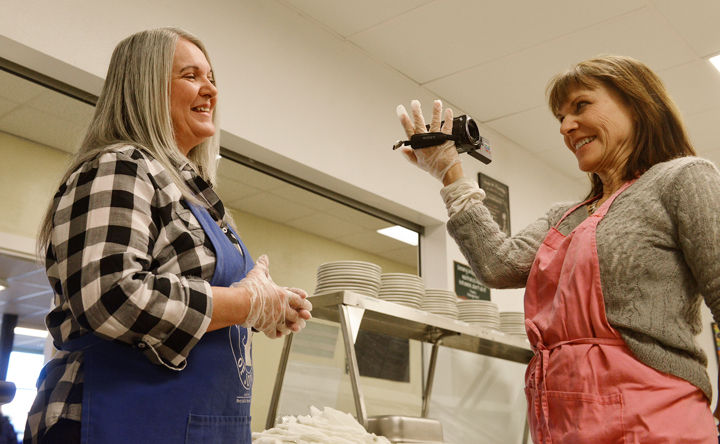 Lu Ann Cahn interviews both Cindy Moore and herself during a visit to Watered Gardens on Tuesday. 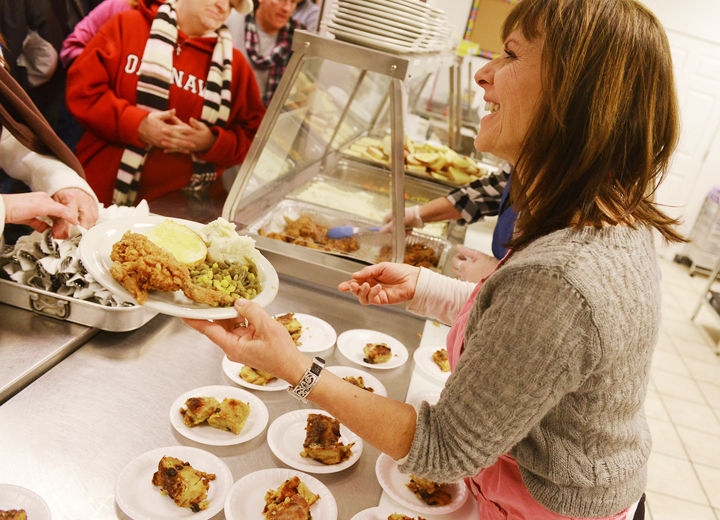 Cindy Moore (left) takes time to chat with author Lu Ann Cahn in the kitchen of Watered Gardens on Tuesday.

Lu Ann Cahn, left, and Cindy Moore share an interview during Cahn's visit to Joplin and Watered Gardens on Tuesday.

Lu Ann Cahn interviews both Cindy Moore and herself during a visit to Watered Gardens on Tuesday.

Two women, 1,170 miles apart doing a year’s worth of things they’d never done before: Eating a scorpion. Swinging on a trapeze. Giving hugs to strangers. Going to the movies alone.

For one, the experience became the subject of an inspirational book.

For the other — a Joplin woman — it was an awakening.

On Tuesday, the two shared the same experience in Joplin: Preparing and serving a meal at a homeless shelter.

“This is an incredible place and an incredible experience,” said Lu Ann Cahn, an 8-time Emmy Award-winning television journalist-turned author, as she prepared food at Watered Gardens.

Cahn had been at her Philadelphia station, NBC10, for 28 years when the news industry and the economy began changing quickly and she was faced with learning "a whole new way of work and technology."

Many her age were abandoning the business.

“Work had always fulfilled me, but all of a sudden I was unhappy. The world was changing and moving on, and I didn’t want it to.”

Cahn, now 58, said that although she had always been driven — she survived breast cancer and achieved the highest level of success in her career — she wasn’t sure what to do next.

“I just felt stuck," she said.

Her daughter, Alexa, now 27, provided the answer: Choose a new thing each day and blog about it.

“I thought it was crazy but I started a list,” Cahn said.

It included things such as buying a lottery ticket and eating nothing but dessert all day — a seemingly good idea that in reality was horrible.

Then, she decided to begin a formal project in earnest and called it “A Year of Firsts.”

Day 1: Participate in the Polar Bear Plunge, which she had covered as a journalist for years and always thought was “absolutely crazy.”

“I knew I had to start with something really big,” she said. “I was afraid of the ocean, even in summer.”

But, screaming all the way into the cold Atlantic Ocean and out again, she did it.

That was Jan. 1, 2010. Alexa documented it on video and taught her mom how to upload it to the new blog, as she would do with each of the 364 new experiences that followed.

“It was like a light went on,” Cahn said. “I just knew I was on the right path.”

The key, she said, was learning to say “yes.”

“The moment I started agreeing to say ‘yes,’ things starting opening up for me.”

Not everything was easy or fun. Like eating the scorpion. And the trapeze. Or going back to school to earn a master’s degree.

But she learned from all of it, she said.

“It made me realize that in January it’s time to begin resolutions, but people always make them really big, like to learn to speak a new language or climb Mount Everest or lose 50 pounds,” Cahn said. “Two weeks in, we’re like, ‘I’m not doing that. Forget it’.”

“I discovered we ought to change just one thing, and that’s our willingness to do new things. Because that changes everything."

Her blog paved the way for a book, “I Dare Me: How I Rebooted and Recharged My Life By Doing Something New Every Day,” published by Penguin Group Publishing in 2013.

“I wanted something that would help me move beyond my comfort zone,” Moore said. “It’s so easy to get stuck.”

“I was both inspired and scared to start a year of firsts for myself. But it was perfect. I bought her book and read it and knew that’s what I wanted to do.”

Cahn said she’s been "re-inspired" by Moore and others across the country who have read her book and started their own year of firsts.

“She didn’t just read the book, she started living it,” Cahn said. The normally reserved Moore began on Jan. 1, 2014, by running outside and shooting off fireworks. She ended on Dec. 31 by making a movie of her year’s experiences.

In between, writing her own blog held her accountable and at year’s end helped Moore remember what she’d experienced. Moore also reached out to Cahn, who invited her to write a guest blog. Cahn also stayed in touch with Moore, checking in periodically on her progress.

On Valentines Day, Moore bought a dozen roses, drove around Joplin, and handed them out to people working that night. After seeing her granddaughter dance across the floor at Chick-fil-A, she realized how inhibited she’d become as an adult, went to a public place and danced to Pharrell's "Happy."

She and her grandson left random notes of encouragement on car windshields, quarters in vending machines and paid for drinks for customers next in line at Starbuck’s.

She learned to use power tools so that she could restore antique chairs. She created a garden in her backyard and learned to grow and dry herbs for use in beauty products and potpourri.

She tried new foods and new restaurants, and took a Zumba class at the YMCA, thinking she’d just try it once.

And there were big firsts: Her first international flight, for example.

“I had never been out of the country, and I went to Scotland for 10 days. I got my first passport. It was amazing,” Moore said. “It seems like once you open yourself up to doing new experiences, then new experiences flow in to meet you.”

By the end of the year, she realized how much the Joplin area offers, from entertainers at Missouri Southern State University to Spiva Center for the Arts.

“I would have missed all those opportunities if I hadn’t been open to and looking for them," she said.

On Tuesday, Cahn stopped in Joplin on her way from Kansas City to Tulsa, Oklahoma, specifically to meet with Moore for a “dare” as part of her current tour, “Thirty Dares in 30 Cities.”

They chose as their dare giving back in a way neither had before: Working at a homeless shelter.

While there, Cahn spoke to those she served and encouraged them to take the first step in getting "unstuck."

"There are so many levels of 'stuck' that can happen in life. Homelessness has to be one of the hardest. Watching men, women and children come in from the cold, so grateful for warmth and a meal, reminded me of how fortunate I am and that we can always do more to lift people," Cahn said afterward.

Moore said others seeking to try a year of firsts should avoid planning too much.

“Not everything is planned,” Moore said. “You have to be open to an opportunity or a choice when it presents itself.”

“I never worried about what I was going to do the next day, and I think it would be true for everybody, if you’re just aware of it. There are exciting opportunities presented every day but we just don’t take the time to act on it, and we should.”

For 2015, Cindy Moore has embarked on a second year of firsts. Her theme word, "journey."

“It comes from a French word, which means how far you can travel in one day,” she said.