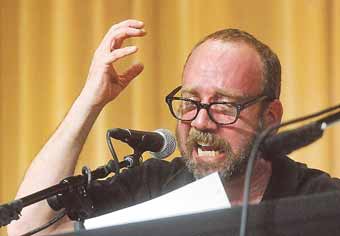 Actor Paul Giamatti is a study in intense emotion as he reads a passage in which Job expresses his anger toward God in the biblical story. Earlier, he had noted the energy of Outside the Wire’s productions. 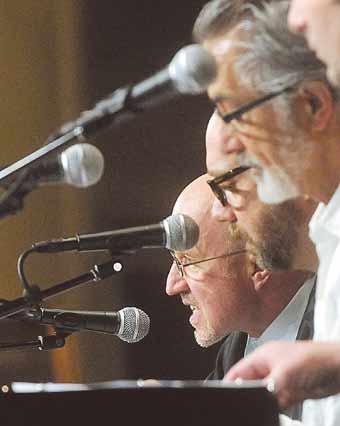 Actors (from left) Arliss Howard, Paul Giamatti and David Strathairn read a passage from the Book of Job on Sunday afternoon at College Heights Christian Church in Joplin. The Book of Job project was presented by Outside the Wire, a New York company that uses theater and classic literature to connect with audiences. The Joplin performance was its first for a community that has suffered a great loss.

Actor Paul Giamatti is a study in intense emotion as he reads a passage in which Job expresses his anger toward God in the biblical story. Earlier, he had noted the energy of Outside the Wire’s productions.

Actors (from left) Arliss Howard, Paul Giamatti and David Strathairn read a passage from the Book of Job on Sunday afternoon at College Heights Christian Church in Joplin. The Book of Job project was presented by Outside the Wire, a New York company that uses theater and classic literature to connect with audiences. The Joplin performance was its first for a community that has suffered a great loss.

The audience of several hundred people sat in silence, listening intently to the words of Job being brought to life in a no-frills, powerful performance.

“If ever my grief were measured or my sorrow put on a scale, it would outweigh the sands of the ocean. ... All my strength has left me; all hope has been driven away.”

There was a pause not long after the line, a quiet heavy with meaning to many of those gathered Sunday afternoon at College Heights Christian Church for the first of two dramatic readings from the Book of Job.

The event was presented by Outside the Wire, which uses theater and classic literature to connect with audiences in the military, correctional workers and those who treat substance abuse and provide end-of-life care, and to provide a springboard for discussion. The Book of Job project marked the New York-based company’s first performance in a community that has suffered a great loss — in Joplin’s case, the tornado of May 22, 2011.

The readings were performed by award-winning actors Paul Giamatti, David Strathairn and Arliss Howard, joined by director and Outside the Wire co-founder Bryan Doerries.

Strathairn — who received an Oscar nomination for best actor for his role as Edgar R. Murrow in “Good Night, and Good Luck” — said he first became involved with Outside the Wire’s “Theater of War” production, performing classical literature for military audiences.

The Joplin performance, he said, was a “bit of an unknown” given that it was something new for the group.

“It’s sort of the first of its kind for us, where we’re taking liturgy and coming only a year hence from the event,” he said. “I don’t know what to expect. I don’t know if any of us really do.”

Giamatti — an Emmy and Golden Globe winner for the HBO miniseries “John Adams” — said he first heard about Outside the Wire while working with Strathairn on another project.

“He told me about it, and I said, ‘Well, that’s amazing. I’d love to do that kind of thing,’” he said. “I did a reading of Greek tragedies for the Army, a similar kind of therapeutic idea. I’ve tried to do other things, but it never worked out timing-wise. This worked out.”

Giamatti said he and the other actors arrived in Joplin late Saturday and spent only a short time Sunday morning preparing for the reading.

“There’s something to the drive of it, the energy of it,” he said of Outside the Wire’s productions. “They’re so emotionally intense that in a way, you really can’t rehearse. You just have to throw yourself into it.”

The group selected the Book of Job as one that might hold special meaning for local residents. The biblical story, which begins and ends in a whirlwind, is about a man whose life and livelihood are upended and who questions why he is being made to suffer.

College Heights Pastor Randy Gariss called Job “an incredibly raw and accurate book for life,” and said he hoped that the performance would resonate with a community that has been through so much.

“Joplin has always been a great town,” Gariss said. “But Joplin’s like a lot of America. We value our stuff, we value our privacy and we value our independence. And that’s all fine until reality hits you.

“We were a town that suddenly got more mature. It was a wake-up call. Coming that close to death makes you think about life in deeper ways.”

After the performance, which lasted about 45 minutes, three community panelists took the stage to offer their reaction to it. Speaking were Dan Mitchell, director of The Bridge youth center; Susan Murdock, who recounted her feelings while searching for her injured son after the tornado; and Kevin Whisman, a Joplin counselor.

For Whisman, the trials of Job were echoed as he recalled working with those who survived the tornado.

“I met several people whose boots were heavy,” he said. “People would come and couldn’t find hope, didn’t know what to believe in, who to believe in or where to go.”

After the three panelists spoke, Doerries spent about an hour interacting with audience members, who shared their perspective.

The often emotional session ranged from an observation that “terrible things happen to really nice people,” as one audience member put it, to survivor’s guilt, the role of the church in Joplin’s recovery, and the moments of tears and joy that have been felt over the past 12 months.

It was a frank community discussion that included moments of sorrow, thoughtfulness and even a bit of levity — which was exactly the intent of the program, Doerries said.

The Book of Job reading was chosen for its ability to “reach across time,” he said. “Men and women living on this planet for thousands of years have asked the same questions.”

Bruce Leisy, a Carl Junction resident who attended the performance with his wife, Llinos, said he was touched by the emotion and honesty of the performance, and the discussion that followed.

“I thought it was an outstanding concept, bringing (Job) to life like this,” he said. “It was very meaningful — just the text and people speaking from the heart.”

Among those in attendance for the College Heights performance was Gov. Jay Nixon. A second performance of the Book of Job, presented by Ozark Center, was put on Sunday night at the Memorial school building.