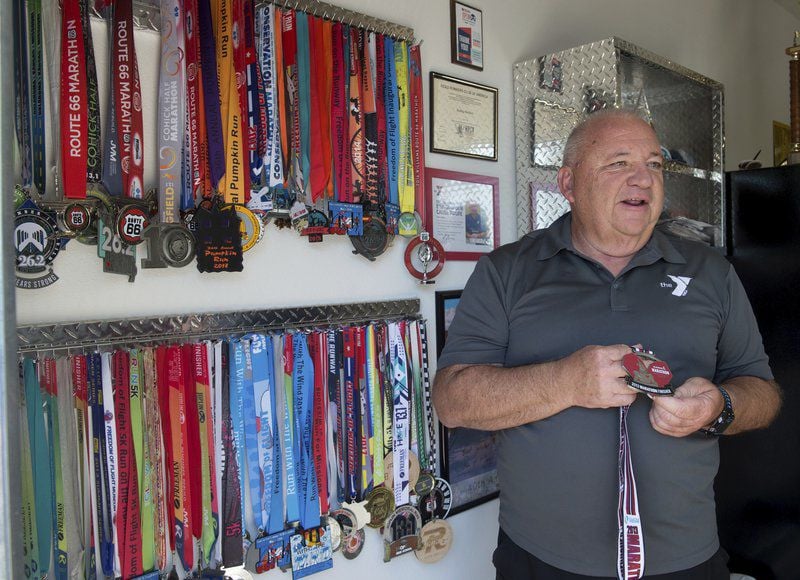 Bobby Ballard, whose life was saved by CPR, on Monday talks about his finishers medal for the first marathon he completed. Ballard is to speak about his experience with CPR at the upcoming Hands-Only CPR Mobile Tour, a joint effort of the American Heart Association and Anthem Blue Cross and Blue Shield Foundation. GLOBE | ROGER NOMER 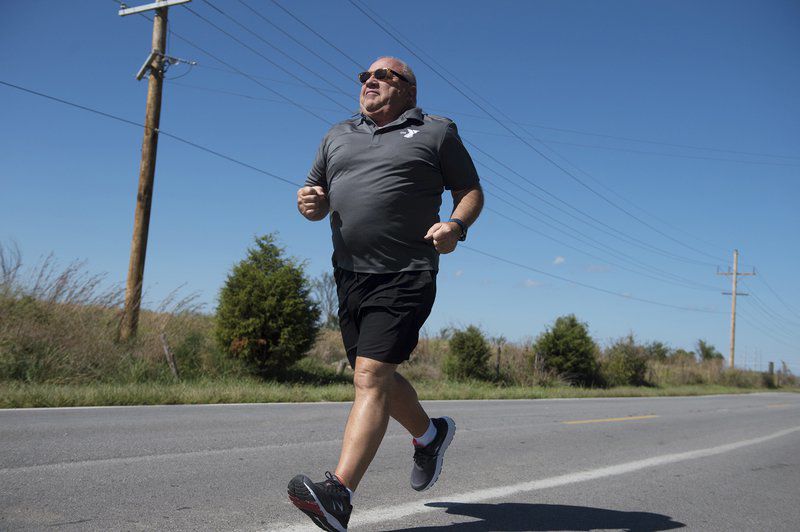 Bobby Ballard pounds the pavement Monday morning near his home in Joplin. He has run in approximately 250 races and become a running coach at the Joplin Family Y in the wake of a heart attack in 2011. GLOBE | ROGER NOMER

Bobby Ballard, whose life was saved by CPR, on Monday talks about his finishers medal for the first marathon he completed. Ballard is to speak about his experience with CPR at the upcoming Hands-Only CPR Mobile Tour, a joint effort of the American Heart Association and Anthem Blue Cross and Blue Shield Foundation. GLOBE | ROGER NOMER

Bobby Ballard pounds the pavement Monday morning near his home in Joplin. He has run in approximately 250 races and become a running coach at the Joplin Family Y in the wake of a heart attack in 2011. GLOBE | ROGER NOMER

It's not an understatement to say that CPR saved Bobby Ballard's life.

It was April 2011, and Ballard was training for a race. After a 3-mile run, he collapsed with a heart attack, and a running partner administered CPR before emergency personnel arrived.

"CPR is the only reason I am here," he said this week.

Ballard is slated to speak about his experience with CPR at the upcoming Hands-Only CPR Mobile Tour, a joint effort of the American Heart Association and Anthem Blue Cross and Blue Shield Foundation.

The tour will stop in Joplin next week to train the public in hands-only CPR. Hands-only CPR has just two steps: When you see a teen or adult suddenly collapse, call 911, then push hard and fast in the center of the person's chest until help arrives.

During the Joplin tour, participants will learn hands-only CPR during interactive sessions set to music. Two masters of ceremonies will lead 30-minute sessions in which they perform a song that is 100 to 120 beats per minute — the rate you should push on the chest during CPR.

The tour also will feature a mobile kiosk for an opportunity to learn hands-only CPR on a high-fidelity mannequin, a lab showing users how to use an automated external defibrillator, free flu shots for people age 4 to 64, free emergency kits for the first 50 participants, prizes, giveaways, social media stations and free health screenings.

“With about 70% of cardiac arrests occurring at home, a person will likely be trying to save the life of someone they know and love if they’re called on to perform hands-only CPR,” said Jennifer Jaeger, executive director of the American Heart Association, in a statement. “The association urges the public to get trained because we need more lifesavers in our communities to be prepared to spring into action if they see a person suffer a cardiac emergency.”

“Anthem is dedicated to supporting important initiatives that empower our community to become actively engaged in their health and wellness,” said Amadou Yattassaye, president of Anthem Blue Cross and Blue Shield in Missouri, in a statement. “Most people feel helpless to act during a cardiac emergency because they don’t know how to perform CPR or they may be afraid. But the training and education provided during the tour will help people acquire a comfort level and confidence with performing CPR, which may make the difference for someone they know or love.”

'It changed my outlook'

Ballard, of Joplin, became physically active about 2009 after weighing in at more than 300 pounds. Wanting to shed some of that weight, he began walking laps at Northpark Mall and eventually joined the Joplin Family Y to take part in a beginners' running course.

It was just after one training session for a race that Ballard suffered the heart attack following a run at Campbell Parkway. He wouldn't remember anything that happened for the next eight days.

A woman who was running with him, a nurse, recognized the signs of a heart attack and administered CPR. Local emergency personnel arrived to take him to the hospital, shocking him seven times on the way to keep him alive. Once Ballard made it to the emergency room, doctors believed he wouldn't make it through the night.

But he did, and he soon received a stent in his heart and later underwent triple bypass surgery. Five weeks after that surgery, Ballard walked in the race for which he was initially training.

Since that time, Ballard has run in approximately 250 races, including eight marathons; his favorite race medal, from his first marathon, fittingly bears the image of the Tin Man from "The Wizard of Oz," complete with a shiny red heart. His next marathon, in Springfield, is coming up in November. He also has become a running coach at the Joplin Y.

CPR made all the difference for him, and he's now certified to administer it himself, he said.

"It changed my whole outlook on life," he said. "You don't take anything for granted."

Another lifesaving story emerged over the weekend when CPR was used to help 64-year-old videographer Mike Flanary, who collapsed with a heart attack Sunday in the visiting dugout at Busch Stadium.

Flanary, who ultimately suffered a heart attack and a stroke, was briefly without a pulse. St. Louis Post-Dispatch baseball writer Derrick Goold had CPR training as a youth and rushed to help. The Chicago Cubs' training staff and EMTs performed further medical procedures before Flanary was taken to a hospital, where he was reported to be in critical but stable condition.

The hands-only CPR tour will stop in Joplin on Wednesday, Oct. 9, at the Memorial Hall parking lot, 212 W. Eighth St. Thirty-minute CPR training sessions will be held hourly from 9 a.m. to 1 p.m. To preregister for a training session, visit heart.org/cprtour/joplin.

Hands-only CPR demonstrations also will be given at the Four States Heart Walk in Joplin, which starts at 10 a.m. Saturday, Oct. 12, at Missouri Southern State University. All training sessions are free.

To learn more about the hands-only CPR campaign, go to heart.org/handsonlycpr or facebook.com/AHACPR.