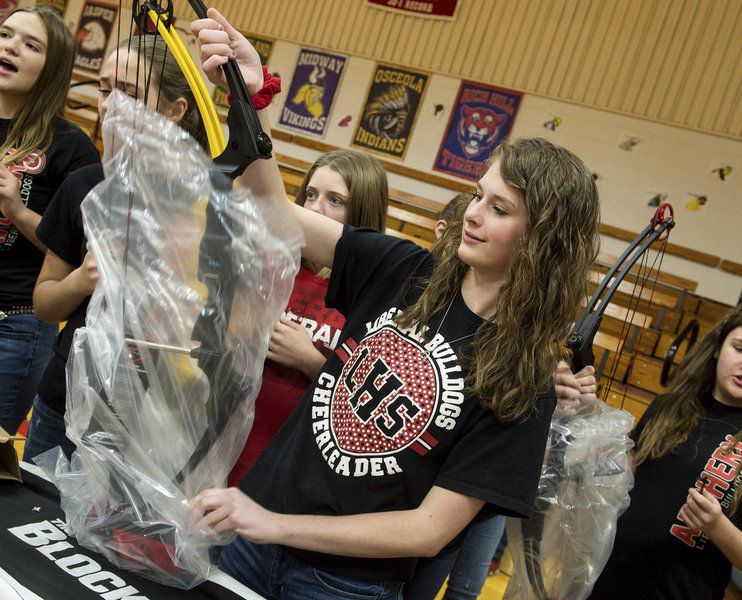 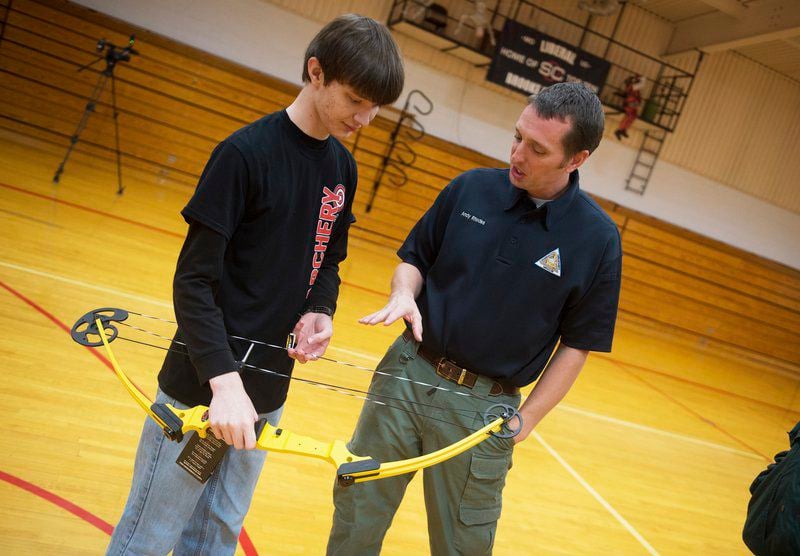 Andy Rhodes, educator with the Missouri Department of Conservation, talks with Caleb Vore, freshman at Liberal High School, about donated archery equipment on Wednesday at the school. GLOBE | ROGER NOMER 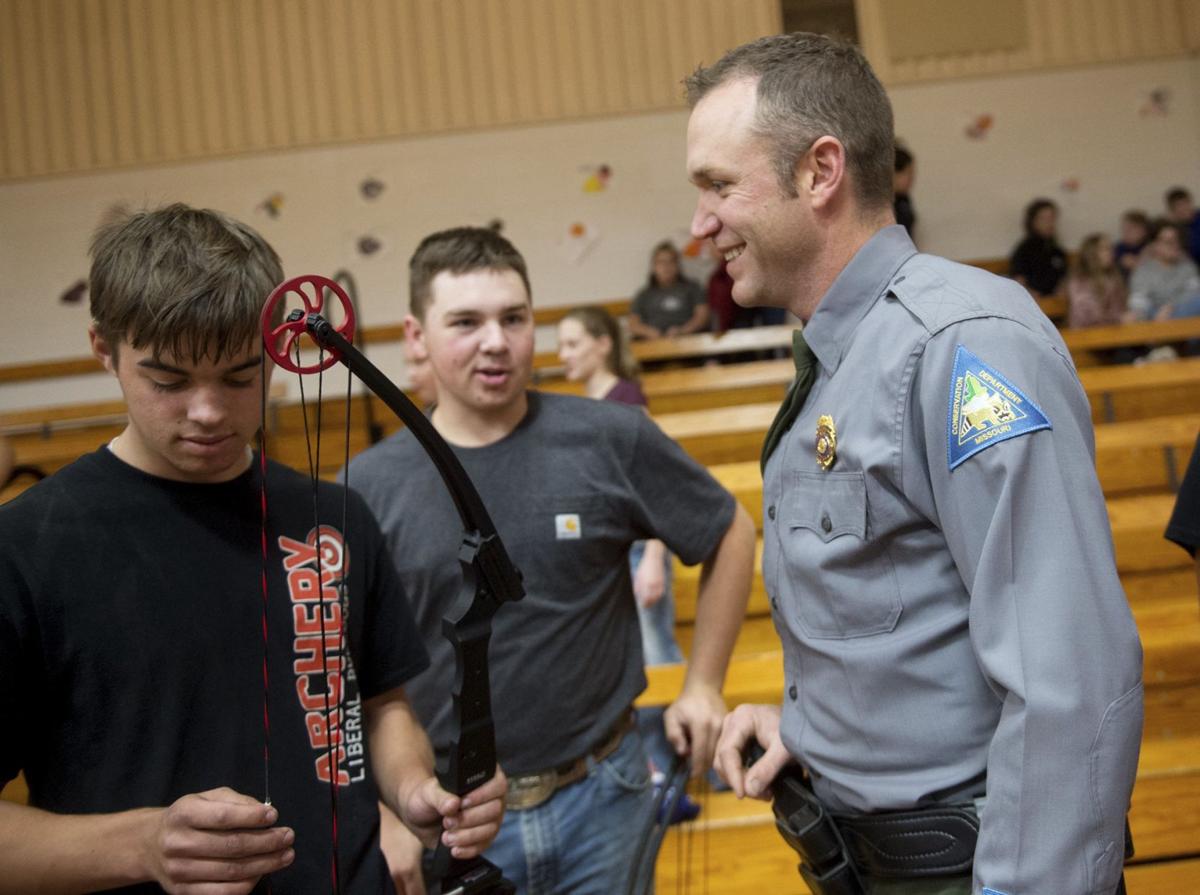 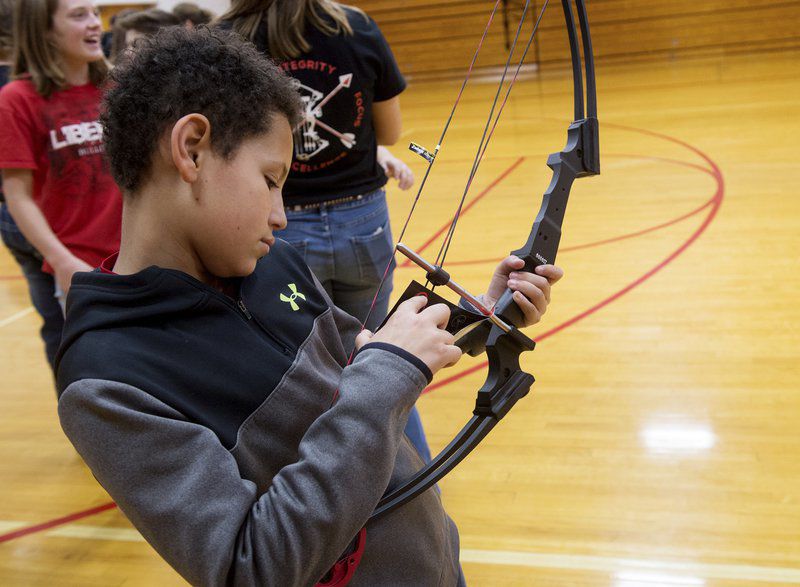 Andy Rhodes, educator with the Missouri Department of Conservation, talks with Caleb Vore, freshman at Liberal High School, about donated archery equipment on Wednesday at the school. GLOBE | ROGER NOMER

LIBERAL, Mo. — It could’ve easily been mistaken for Christmas Day on Wednesday at Liberal High School when the archery students opened up boxes of new equipment donated to the district by the Missouri Department of Conservation to replace the team’s belongings that were lost in a recent arson fire.

This year has been particularly tough for the district because it was affected by two arson fires in less than a week. A fire set on Sept. 16 destroyed the district’s old bus barn, a school bus, a tractor and the high school’s track equipment.

This week, the faces of the team members lit up like Christmas trees as they saw the new archery equipment, which included 12 Mathews Genesis bows, two boxes of arrows, five targets, a net, a bow rack and a repair kit. Wednesday was a reunion of sorts for the archery team, given that the members had not been able to practice together since the fire.

Cora James, 14, a freshman at Liberal High School, held one of the new bows in her hand with a smile on her face. James said she was in shock when she had heard about the fires, but she’s happy that things are starting to look up.

“This is really cool, and I’m so happy and excited that they donated this to us,” she said. “I’m really thankful about it and that we’re all together again. I didn’t know if anyone had enough money to donate or if they were going to. It just makes me really happy that someone cares.”

Cooper Trout, 12, a seventh grader at Liberal Middle School, said the donation was a pleasant surprise because they haven’t been able to practice for a couple of months.

“I really like the bows and the net,” he said. “I was happy that someone could get together with us and give us some targets, arrows and bows.”

The archery gear was donated by the Missouri Department of Conservation through a grant almost a year ago, with officials feeling driven to help the district after hearing about its losses because of the fires.

Eric Edwards, Missouri National Archery in the Schools Program coordinator, was able to put the equipment together. It is composed of a basic kit that a school would order through an archery equipment rebate grant. The Liberal School District was awarded the Missouri Department of Conservation grant last February and had only been able to use the gear for one season before it was destroyed.

“The kits can cost around $3,000,” Andy Rhodes, conservation educator with the department. “They didn’t even have their kit for a year before it was lost in the fire. I’m excited for them and glad that they’ll be able to get back at it. I’ve been watching the kids, and they’re locked onto the bows already. It’s a big deal, and we understand that.”

The Missouri National Archery in the Schools Program aims to support international-style target archery to students in grades four through 12.

With the help of the Missouri Department of Conservation and the Conservation Federation of Missouri, MoNASP provides qualified school districts with an archery equipment rebate grant, which offers reimbursement opportunities for equipment purchases.

Rhodes said through the grant, the department cooperates with schools that want to join MoNASP and trains teachers in basic archery instruction. The trained staff members will return to their school districts and then order equipment. Once filling out the grant paperwork, the department will reimburse the qualified districts up to $1,500. Schools that have participated in the archery program for five years may be eligible for $500 maintenance grants.

“There are over 600 schools that are part of MoNASP, but the number changes every day,” Rhodes said. “In archery, not only are there benefits in terms of focus, increased attendance, and improved test scores, but for us as a department, in terms of making contact and influencing lives of young people. It’s huge. It’s really important to us to see that and to be able to help in any way that we can.”

“They reached out to us when they found out that we had lost all of our equipment in the fire, and they said they want to help replace it,” she said. She said he cried on the phone when she was talking to Edwards.

After the fire, Reed said, she had students asking her every week if the program would end. The team ended up losing at least $5,000 in archery equipment.

“I had kids who lost their personal bows, which can start out at $130,” she said. “It’s a huge thing for them to see that we’re able to still do the program. The big thing now is just finding a place to practice. The gym was the only place we had to practice, so now we’re trying to find something within the community that’s big enough to use.”

Bill Harvey, superintendent of schools, said the buildings that were destroyed in the fire were insured, and officials hope to hear back from the insurance company by the end of the week.

“It’s been kind of discouraging with everything that’s happened to the kids as a result of the fire, but when we have organizations like this helping us out, it seems as though all will be well, he said. “Our kids are excited. Our staff is excited. We seem to be able to get things back to normal as much as possible.”

Area schools that are part of the Missouri National Archery in the Schools Program include Carl Junction High School, Joplin High School, East Newton High School and Sarcoxie High School. For more information on the program, go to https://nature.mdc.mo.gov/discover-nature/teacher-portal/monasp.

Donald "Don" Joe Fanning, of Joplin, Missouri, was called home by the Lord on Sunday, June 28, 2020, at KU Medical Center. Don was born September 26, 1950, in Carthage, Missouri. He was preceded in death by his parents, Joe and Bonnie Fanning, and his brother, Ron Fanning. Survivors include …