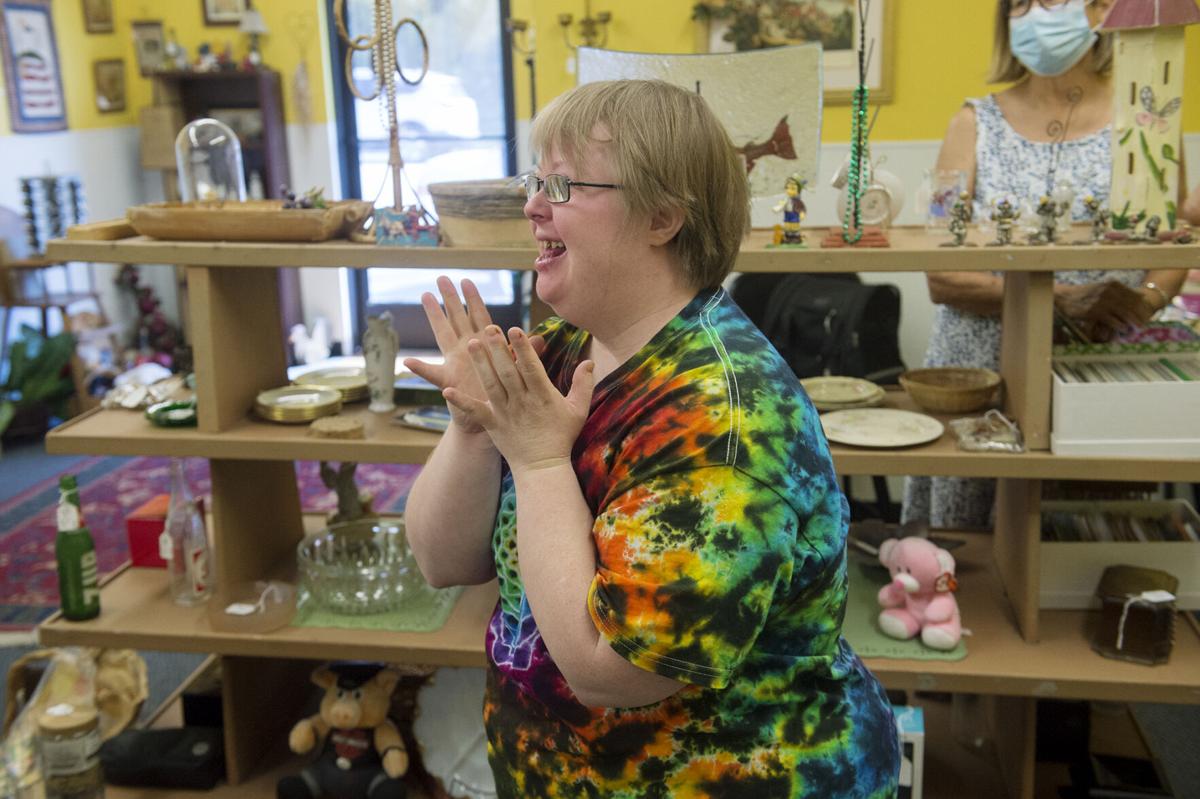 Ayla Sarakinis on Monday talks about her excitement in opening Ayla’s Place in Joplin. The 30-year-old woman, who has Down syndrome, will open the antiques-collectibles shop Tuesday with help from her mother, Stacey Sarakinis. GLOBE | ROGER NOMER 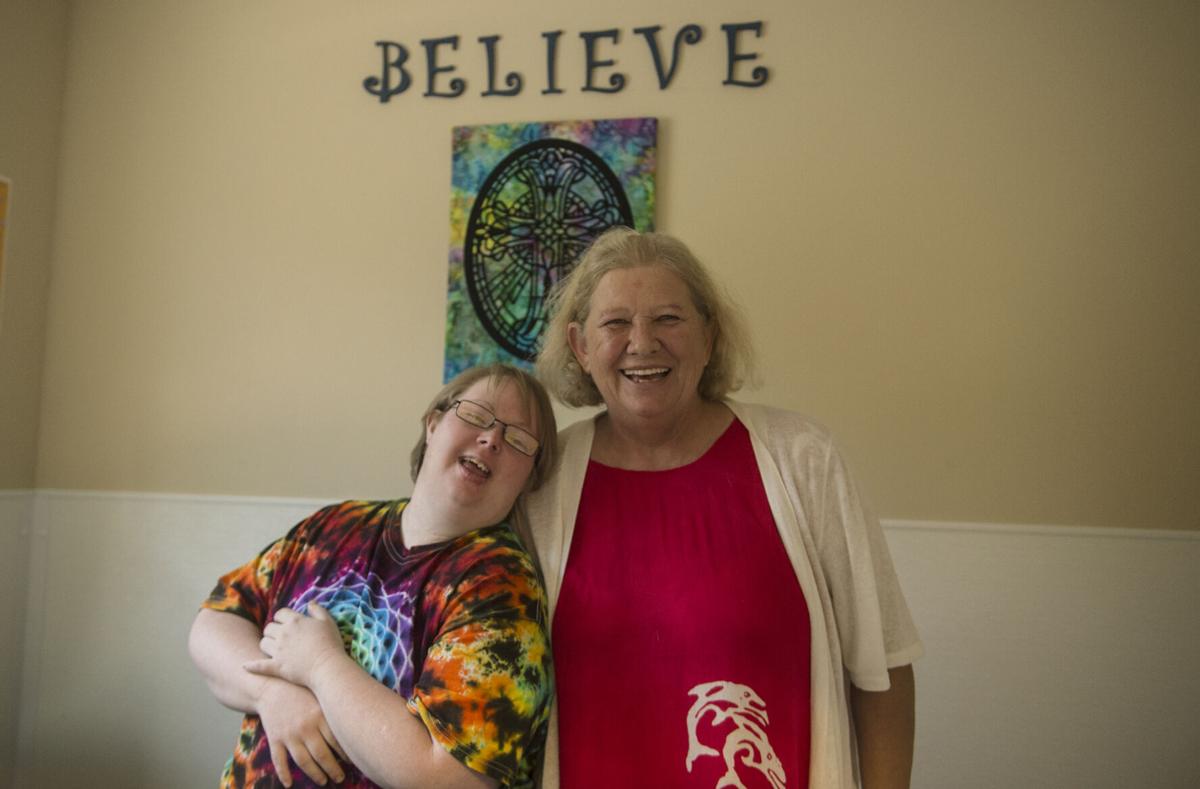 It's always been a dream for Ayla Sarakinis to open Ayla's Place. That dream will be realized Tuesday with the opening of an antiques/collectibles store at 514 N. Main St. Sarakinis, who has Down syndrome, and her mother have adopted "Believe" as their motto for living. GLOBE | ROGER NOMER 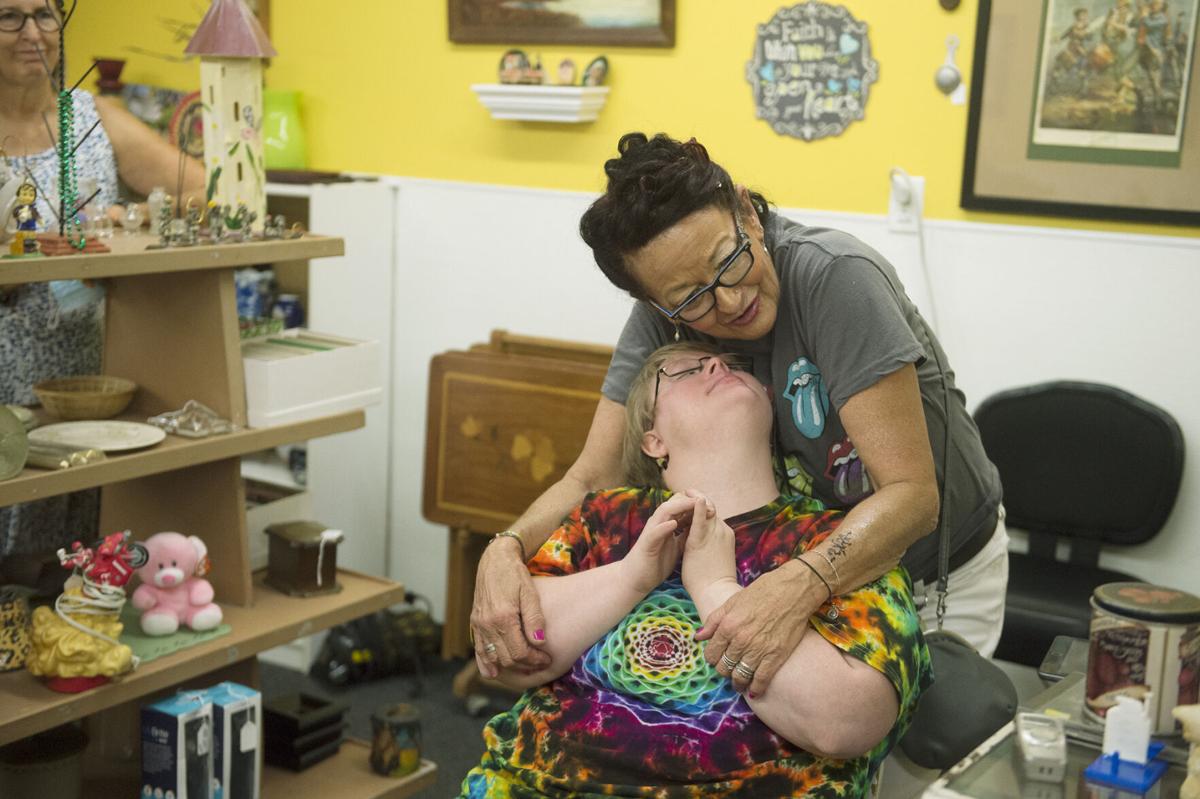 Ayla Sarakinis gets a hug from family friend Cynthia Sikyta on Monday at Ayla’s Place. Sikyta will be helping out at the new store. 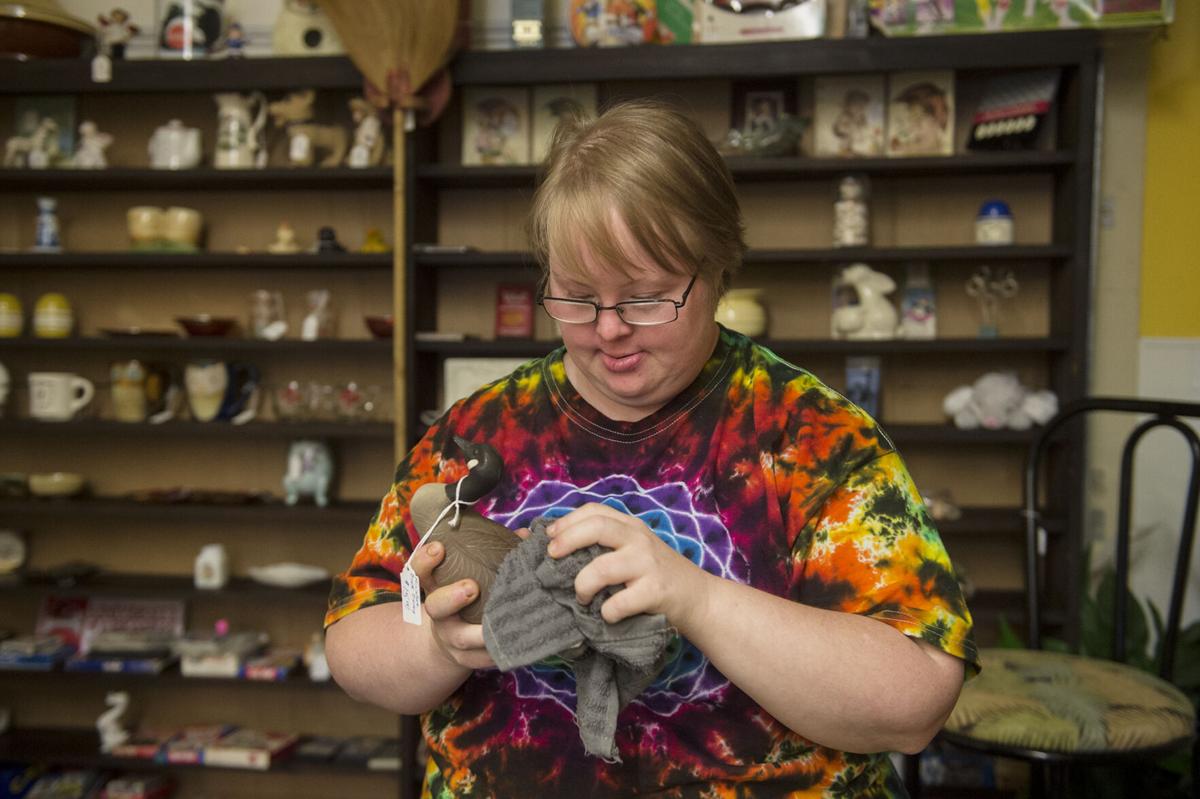 Ayla Sarakinis on Monday prepares for the grand opening of Ayla's Place in Jopin. Her shop at 514 N. Main St. will open Tuesday. GLOBE | ROGER NOMER

Ayla Sarakinis, 30, says she has always dreamed of owning her own business.

At 11 a.m. Tuesday, her childhood dream will become a reality.

Sarakinis is on a mission. She wants her new Joplin store — Ayla’s Place — to be successful. Located at 514 N. Main St., it fills a need requested time and time again by North Heights neighborhood residents hoping for a small antique-collectible store to open shop. But more important is the fact that Sarakinis was born with Down syndrome and wants nothing more than to be a positive role model and inspiration for others like her, who have faced years of something less than support from their peers and adults.

“It’s my dream,” she said. “My biggest dream. It makes me feel happy.

“Yes,” she said, at one point turning to point at the merchant’s license she’s framed and placed on the wall behind the front counter.

She said she’ll work hard at her store to give others with Down syndrome the courage to find jobs to help them live more independently. “I want people (to say), ‘I want to do what Ayla’s doing. Be strong and be happy.’”

“I tell Ayla, ‘You are the face of Down syndrome’” in the Joplin area, said her mother, Stacey Sarakinis.

Ayla Sarakinis was in her element Monday afternoon as she flitted about her store room, pointing out specific items — a collectible figurine on one shelf, a Power Ranger game on another — that she purchased from local auctions or garage or yard sales. All the while, she showcased an attribute that should endear her to future customers — a loving sense of humor. Her Three Stooges impression, for example — complete with the “nyuk nyuk” laugh — is spot-on.

Ayla’s Place wasn’t the original goal. She worked in a day care center for about four years and “absolutely loves babies,” Stacey Sarakinis said of her daughter. But she wanted to find a better-paying job. Over the past couple of years, Ayla Sarakinis struggled to find that job. She filled out 20 to 30 applications for various open positions, she said.

“I was looking for work and I put out all the applications … and nobody called me to say, ‘Do you want a job?’” Ayla Sarakinis said. Worse, some of the rejections came attached with critiques stating that she wasn’t “a good fit” for the company.

“The reality is that we still live in a world where people look at you and they judge you by how you look or dress or how you act,” Stacey Sarakinis said. “I hope that Ayla can change those stigmas.”

And she is aware of those “looks,” as she calls them. A few weeks ago, when visiting a friend at a Joplin apartment complex, several women who were sitting nearby wouldn’t take their eyes off of her. Finally, Ayla Sarakinis turned to face them and demanded, “Do you have a problem with me?” The women looked away.

“She’ll stand up for herself,” Stacey Sarakinis said.

In the face of the rejections, mother and daughter teamed up to open up the antique store. That way, her daughter would learn valuable life skills and “enjoy getting a paycheck,” Stacey Sarakinis said.

“A lot of this here at the store is a continuation of Ayla’s education,” she said, “and as her knowledge expands, she’ll become much more involved.”

The ultimate goal is for Ayla Sarakinis to become self-sufficient, to learn how to handle money, attend auctions, purchase items for the store and to make a livable profit, her mother said.

As her mother talked, Ayla Sarakinis flashed her sense of humor by reaching out and tugging at her arm. “Back to me now,” she said.

But a few moments later, serious again, “I want to take this popular antique store with my mom,” she said, “and turn it into a fancy store.”

Down syndrome is a condition in which a person has an extra chromosome, which are packages of genes in the body that determines a baby’s body forms and functions as it grows during pregnancy. Typically, a baby is born with 46 chromosomes. Babies with Down syndrome have an extra copy of chromosome 21. According to the Centers for Disease Control and Prevention, 6,000 babies are born with Down syndrome each year in the United Sates; that’s roughly one baby in every 700.

Ayla Sarakinis says she has been bullied for most of her life by other kids — who, for example, would tell her to close her mouth because she’s forced to chew with her mouth open. Sometimes the bullying got so bad she would go to a quiet place and quietly cry. But she hasn’t allowed those horrible moments to define and own her; she wants to showcase her sense of humor to inspire others to “follow their hearts” and to do what they’ve always dreamed of doing, like she’s done with Ayla’s Place.

The store will be open from 11 a.m. to 5 p.m. Tuesdays through Sundays.

Two friends will also be familiar faces inside the store. Cynthia Sikyta, a former hairdresser who now works for Preferred Family Medical, will help with the day-to-day store operations.

“I absolutely adore Ayla. I would take a bullet for this woman,” she said. “She just wants to be treated like you or I or anyone else.”

What Ayla is doing, added fellow friend and helper Suzi Back, “is unbelievable. It’s very, very rare to see her doing something like this, and I can’t think of anything like it in (Joplin).”