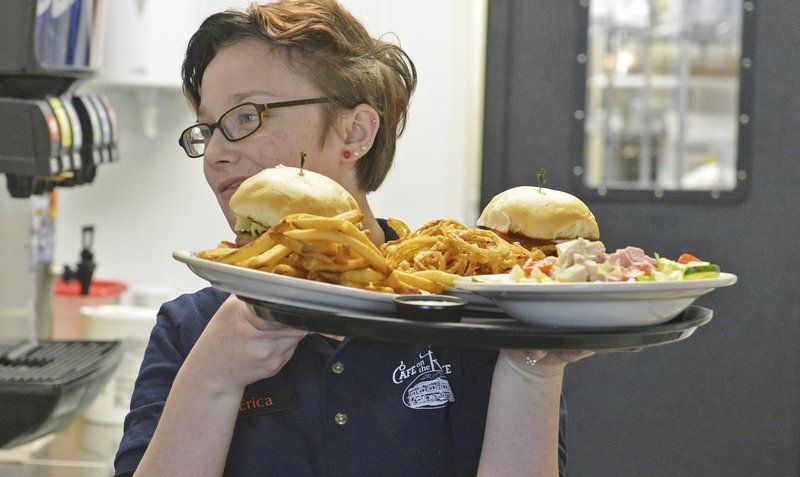 Erica Carter brings an order to a table at Cafe on the Route in Baxter Springs on Wednesday. 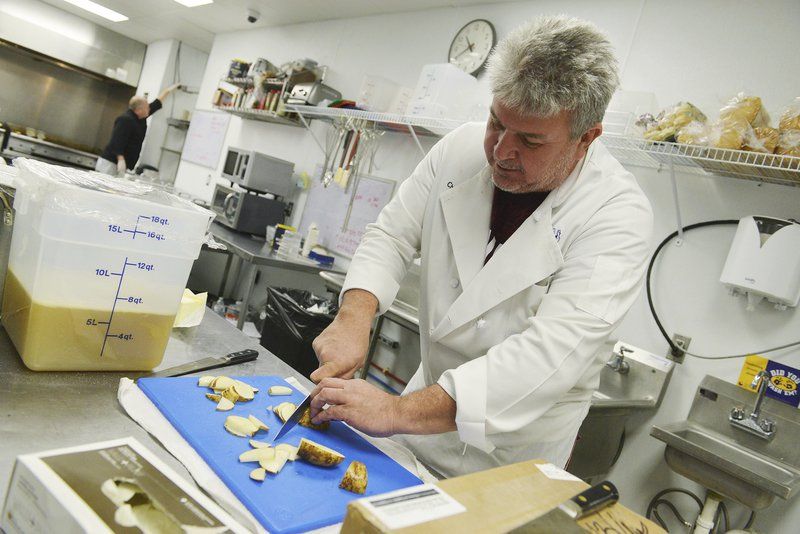 Executive chef Charles Bowen preps vegetables at Cafe on the Route in Baxter Springs on Wednesday. 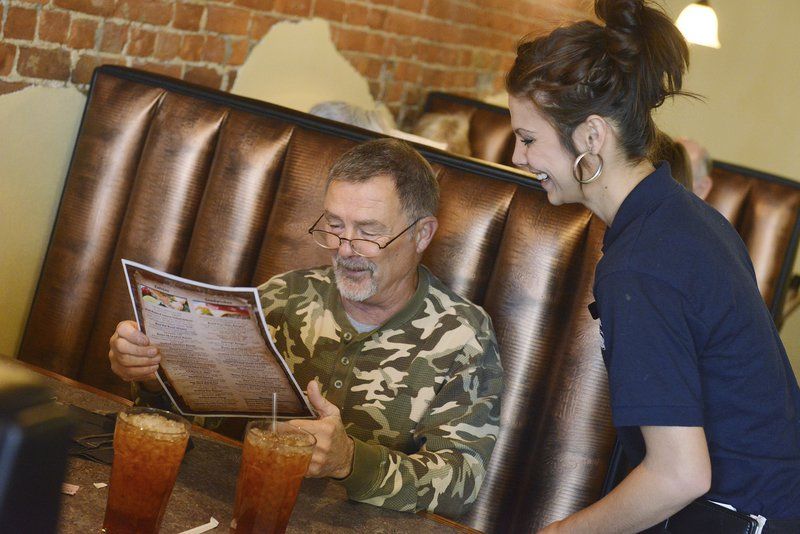 Gabriel Rowden gives Petey Lawson a menu recommendation at Cafe on the Route in Baxter Springs on Wednesday morning.

Erica Carter brings an order to a table at Cafe on the Route in Baxter Springs on Wednesday.

Executive chef Charles Bowen preps vegetables at Cafe on the Route in Baxter Springs on Wednesday.

Gabriel Rowden gives Petey Lawson a menu recommendation at Cafe on the Route in Baxter Springs on Wednesday morning.

BAXTER SPRINGS, Kan. — Shirley Sharbutt and Paula Suman used to frequent Cafe on the Route in Baxter Springs and were disappointed when it closed suddenly about two years ago. But during the past several months, they noticed a remodel was under way.

"Finally, we drove by one day and saw that it was open," said Sharbutt, of Miami, Oklahoma. She and Suman stopped by the recently re-opened restaurant for the first time last week.

On Wednesday morning, workers at the cafe, 1101 Military Ave., were busy preparing for the lunch rush. Customers began walking in soon after the doors opened at 11 a.m., and the phone rang several times as groups called to make reservations.

The restaurant had been a landmark on Route 66 since opening in May 1998, and gained national fame in 2007 when it was featured on Food Network’s “Diners, Drive-ins and Dives” with host Guy Fieri.

In early 2013, an announcement that the Baxter restaurant was closing was abrupt, as winners of holiday gift certificates had been announced just a few weeks before.

Managed by Amy Sanell, Cafe on the Route was known for its eclectic lunch and dinner menu of “traditional American with a twist” created by her husband, Chef Richard Sanell, an executive chef who studied at the Culinary Institute of America in New York City.

The reason for its sudden closing were never made clear, but since then, Tim and Julie Potter, of Miami, Oklahoma, have purchased the restaurant and renovations began in July. It opened Nov. 18 and is being managed by executive chef Charles Bowen and house manager Michelle Haynes.

"Everybody just loves that we've opened back up," Haynes said. "We've had a big turnout so far. For a small community, we were really surprised."

While the Route 66 tourism season isn't yet in full swing, Haynes said she has already received reservations from motorcycle groups, and a group of 35 planned to hold its Christmas party at the cafe.

As he prepped food items in the kitchen, Bowen discussed everything it takes to make a meal something exceptional.

"With every fiber, I believe great food begins with a thousand tiny steps," he said. But Bowen hasn't always focused his efforts on building the perfect meal.

A structural engineer turned chef, Bowen has a Ph.D. and taught engineering at Oklahoma State University for six years. He also has been involved in the remodel of the cafe, which has new appliances in its kitchen and an antique-style dining area with tall ceilings and exposed brick walls.

"I gave up a six-figure job for one half the pay and double the hours," he said. "My fingers hurt, I burn myself and my feet hurt. But I enjoy coming to work every day. I love what I do, and I'm passionate about what I do. This is what makes me tick."

And although his background is in fine dining, Bowen describes his cooking at Cafe on the Route as made-from-scratch comfort food.

The fettuccini alfredo is made-to-order, he said, and the meatballs are house made and have parmesan cheese inside them. The cafe's fries are hand-cut Idaho potatoes. The onion strings and chicken-fried steak are hand battered. And the restaurant has its own smoker for brisket, sausage and ribs.

Suman, of Quapaw, Oklahoma, said she and Sharbutt ate at the cafe quite a bit before it closed.

"They had a pretty good menu," Suman said. "We're hoping this is good."

The building that houses Cafe on the Route in Baxter Springs, which originally was home to the Crowell Bank, is of the Civil War era. It is said to have been robbed in 1876 by Jesse James and Cole Younger.