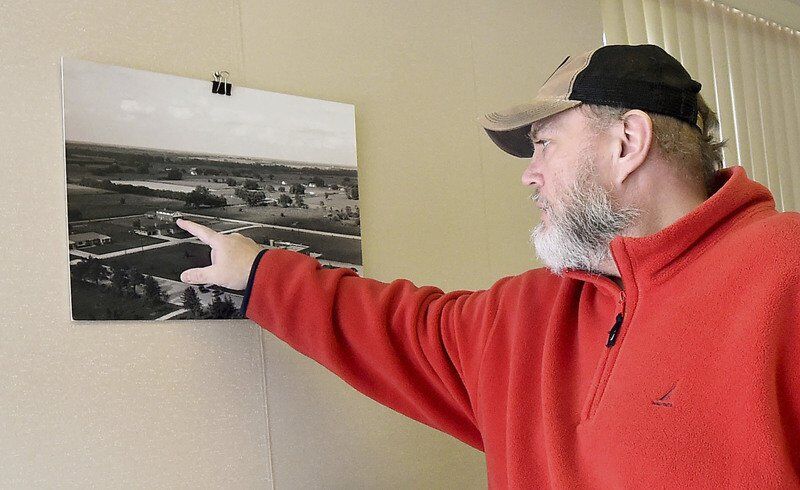 Volunteer Joe Davis points to features on a vintage photograph that depicts the area that will be the Barton County Memorial Park in Lamar. The park will feature 69 pavers in honor of the 69 Barton County residents who were killed in World War II. Organizers of the effort to create the park say they are hopeful that the project can be finished by spring. GLOBE | LAURIE SISK 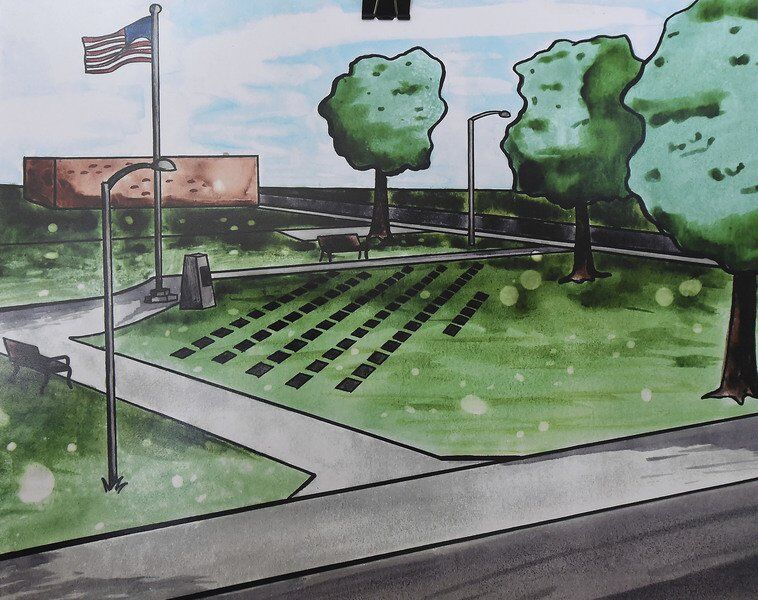 An artist's rendering depicts a memorial to veterans, where 69 paver stones honoring Barton County service members who lost their lives in World War II will be placed.GLOBE | LAURIE SISK 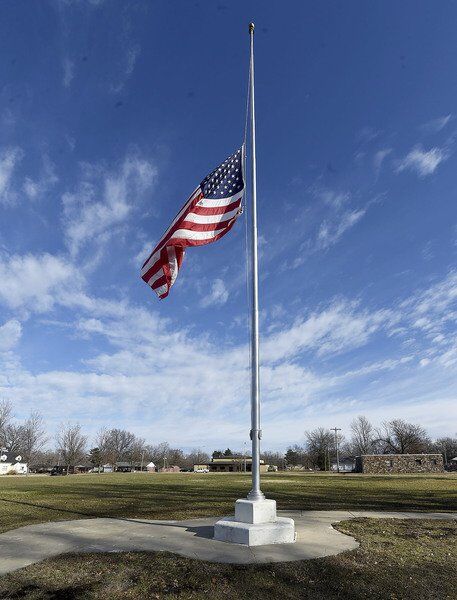 A flag flies in the center of what will be the Barton County Memorial Park in Lamar. The park will feature 69 pavers in honor of the Barton County residents who gave their lives to the effort in World War II. Globe | Laurie Sisk

LAMAR, Mo. — A group of volunteers has raised more than $150,000 in donations to develop a veterans memorial park at the former site of the Barton County Memorial Hospital, the first hospital in the state dedicated to WWII veterans.

The Barton County Memorial Hospital opened in 1949 at Second and Gulf streets in Lamar as a memorial to World War II veterans. Roughly 2,000 men from Barton County served in WWII, but 69 of those service members did not return home.

The hospital was demolished in 2019, opening the door to conversations of what could be done with the land. The Barton County Memorial Park group formed last year to spearhead the project, which is 100% funded by donations and fundraisers.

Group President Joe Davis said the top goal with the park is to keep the area as a memorial to pay tribute to the 69 Barton County veterans who died in World War II. The group earned 501(c)(3) status in June.

“Several of us in the neighborhood jumped into action so they wouldn’t just build houses on the land,” said Davis. “We went to the Barton County commissioners and we told them what we had in mind, and after a few meetings with them, they understood the importance of what we’re trying to do and gave us the green light.”

Several fundraisers and donations have helped propel the Barton County Memorial Park forward. Bricks saved from the original hospital were sold for $10 each last year. An additional $1,400 was raised in a burger and bratwurst fundraiser, as well as approximately $63,000 by selling engraved granite pavers.

Danny Little, founder of Lamar-based Show Me Wagyu Charities, donated $100,000. Lamar Bank & Trust donated $5,000. Several organizations and businesses in Lamar have also contributed to the effort. Davis said the effort now has an estimated total of $170,000.

“We’re going to potentially add some benches as well as signs, trees, etc.,” he said. “We have another idea that we’ll implement in the next couple of years, but we’d like to install a nice gazebo.”

This will be the only memorial in Lamar to be dedicated to WWII veterans, according to Davis. A cannon on the courthouse lawn pays tribute to the fallen men of the Civil War. Memorial Hall is dedicated to World War I veterans, and a memorial at Lamar High School remembers those killed in Vietnam.

The 3-acre tract of land will have ample space to honor other veterans, as well. The highlight of the park will be the service markers that represent each of the 69 soldiers from Barton County who were killed in WWII. The markers are made out of repurposed Carthage stone from the original hospital.

“We’re engraving those 69 service markers with their names on each marker,” said Davis. “This will be the first thing that we do, and hopefully, we can get that done by spring.”

There will be a Walk of Honor using 12-by-12-inch gray granite pavers engraved with the names of any veterans who have served the country in peacetime or during a war.

A lighted war memorial with six granite markers will symbolize each of the six major wars. Each of the markers will have an etched photo and details about each war, including the effect it had on Barton County.

A red iron V representing “Victory” will be erected in the middle. While the pavers for veterans will be featured in the center of the walk, outlying pavers can also be bought to honor people who used the services of the former Barton County Memorial Hospital. A wall will also be available for engraved bricks honoring former employees of the hospital.

“I’ve told people that we will be selling pavers forever,” said Davis. “I’d love to fill the park up with 10,000 veterans, hospital employees and people who were born at the hospital.”

There will also be a seventh monument in the park. Davis said it will be of a 7-foot-tall granite triangle that will have a photo of the original hospital laser etched at the top. It will tell the story of the hospital and the formation of the Barton County Memorial Park.

For more information on the project, visit www.bcmpark.com.

The original Barton County Memorial Hospital was replaced with a new building in 2007. The hospital operation was acquired by the CoxHealth system in 2018.