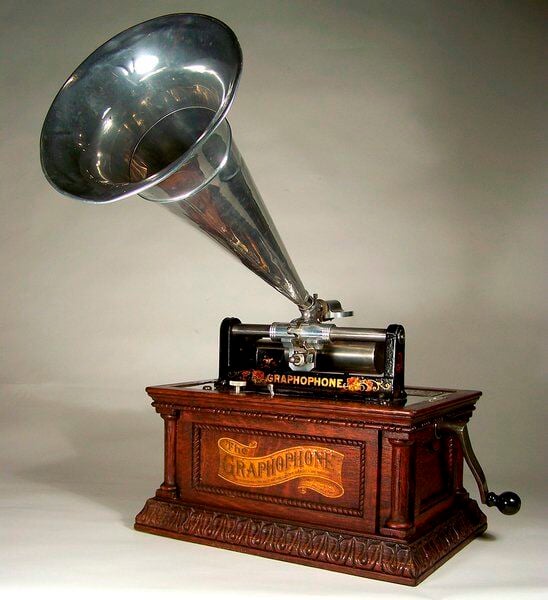 The Columbia Phonograph Co. manufactured two types of graphophones. The first played wax cylinders; the second played rubber discs. The size of the horn dictated the amount of volume the machine could produce. The one pictured plays cylinders. Credit | Public Domain 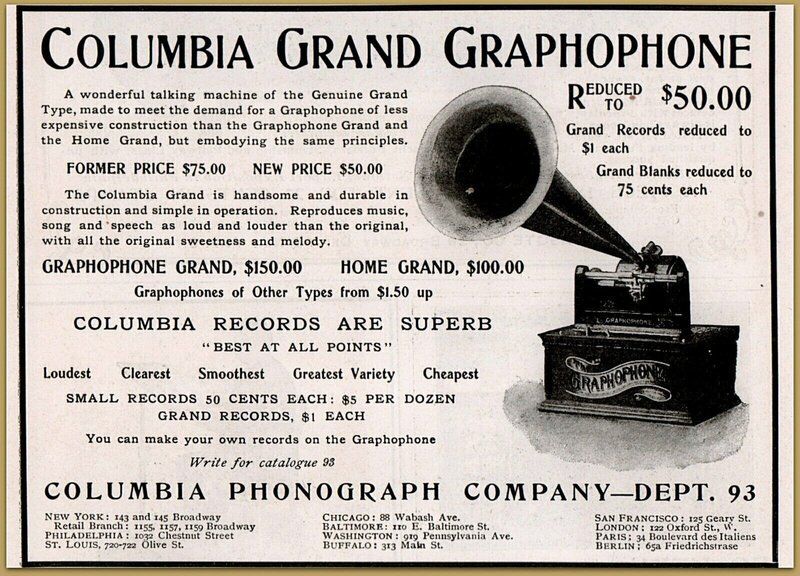 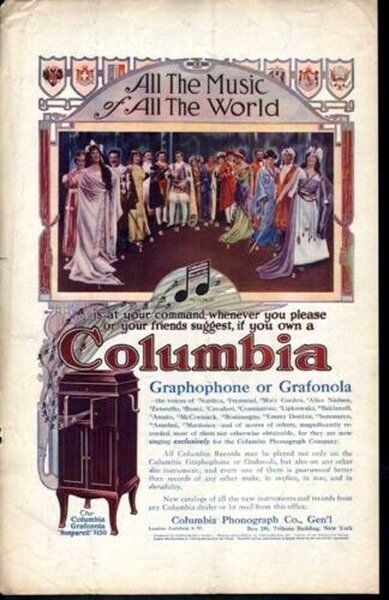 The Columbia Phonograph Co. sold graphophones and discs. In ads, classical and operatic music was promoted as a status symbol. The graphophone could be a cabinet model or a standalone model with an external horn. This ad was from 1911. Credit | Public Domain 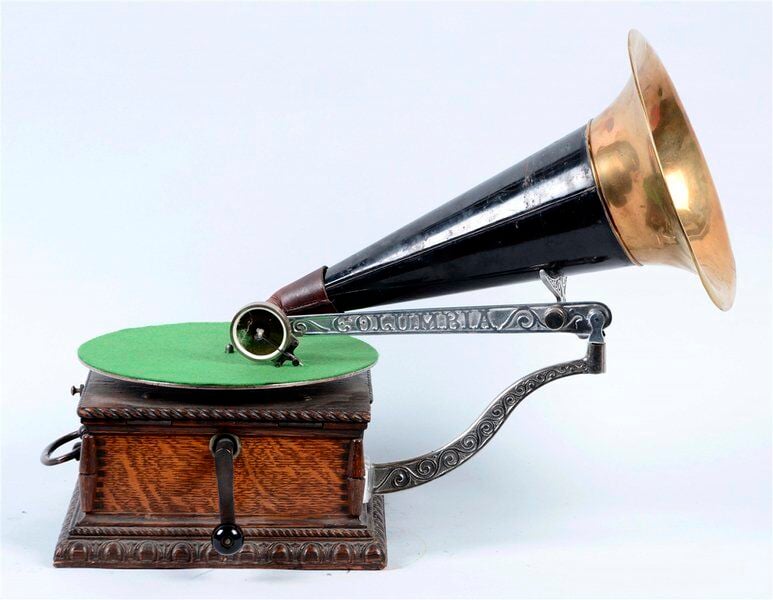 Disc recordings were developed about 1900. This 1903 Columbia Graphophone disc player had a large horn that increased the volume. Credit | Morphyauctions.com 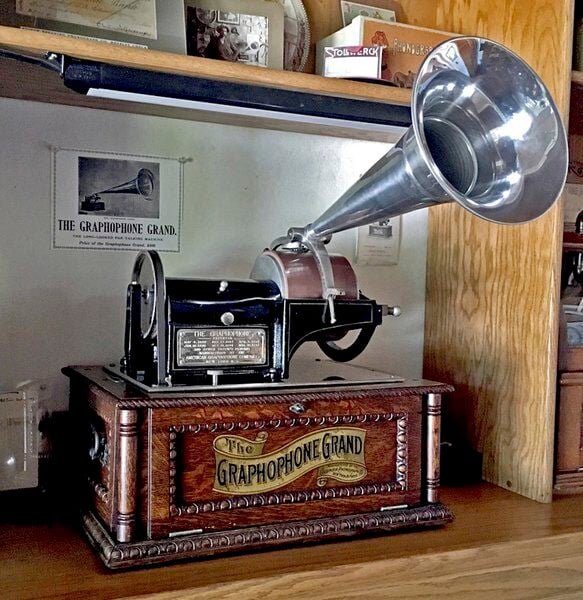 The Columbia Grand Graphophone was the premier line of players produced by Columbia. It carried a $300 price tag when introduced in 1898, which translates into $9,000 in 2020. It played 2-inch and 5-inch cylinders. It weighed 68 pounds and could fill a hall with sound. Credit | edisontinfoil.com

The Columbia Phonograph Co. manufactured two types of graphophones. The first played wax cylinders; the second played rubber discs. The size of the horn dictated the amount of volume the machine could produce. The one pictured plays cylinders. Credit | Public Domain

Disc recordings were developed about 1900. This 1903 Columbia Graphophone disc player had a large horn that increased the volume. Credit | Morphyauctions.com

The Columbia Grand Graphophone was the premier line of players produced by Columbia. It carried a $300 price tag when introduced in 1898, which translates into $9,000 in 2020. It played 2-inch and 5-inch cylinders. It weighed 68 pounds and could fill a hall with sound. Credit | edisontinfoil.com

Boomboxes and cars with trunk speakers have been ways to express identity with plenty of volume. For those who cultivated them, it was music to their ears. As for others, well, one man's music is another man's noise, as the saying goes. Yet that wasn't limited to recent times. Joplin's own graphophone war made its way into the courts in 1911 and eventually into city codes.

Recording sound was patented by Thomas Edison in 1877, though others worked on the concept before him. Edison tried tin strips, wax cylinders and discs but didn't pursue development.

When Edison's English patents expired in 1885, Alexander Graham Bell and the Volta Laboratory came out with their own graphophone that used wax cylinders, which created better sound and lasted longer. A third competitor, Emile Berliner, developed a better, cheaper disc in 1893. His graphophone had a large horn that attached to the arm that tracked across the disc. It was powered by a hand crank and spring.

Those first machines were sold as dictation recorders. While they worked, the machines stirred up such a backlash among stenographers that sales lagged.

The Columbia Phonograph (later Graphophone) Co. saved the day. It recorded music on cylinders. Its "coin-in-slot" machines, or jukeboxes, played a song for a nickel. They were placed in drugstores and saloons, and the public's thirst for music could be slaked a nickel at a time.

As prices dropped, graphophones became common in businesses, theaters, dance halls and amusement parks. One aspect of past history not conveyed by photos is the variety of sounds that accompanied everyday city life. A cacophony of human, animal and mechanical sounds created a cauldron of noises unknown to later generations locked in soundproof vehicles with stereo systems.

It was in this environment in 1911 that Will Poulous operated a shoe-shine shop in the the 500 block of Main Street. The Greek immigrant entertained his customers and himself with a prized graphophone. He kept up with the latest discs. Columbia had won a patent lawsuit to make and sell double-sided discs. For sale were classical and operatic pieces, brass band marches, minstrel songs, ethnic folk tunes and the latest love songs. Imported discs were available from Europe as well. Poulous had a stash of Greek discs he played when nostalgic.

But it was his choice of the new hit "Casey Jones" that landed him in hot water. He played the song over and over again with the horn pointed out into Main Street. His machine was large enough that the sound carried into stores across the street. His neighbors complained, asking him to tone it down or "put a sock in it," the standard sound dampening practice. He refused.

In April 1911, several people went to the City Council to ask that Poulous be arrested for creating a public nuisance. Mayor Guy Humes and Marshal John McManamy protested that graphophones were not prohibited by city ordinance and "Casey Jones" was not indecent or immoral. They could bring a civil suit in municipal court if they wished, but the city's hands were tied. The city attorney agreed with the mayor, and an ordinance to declare the graphophone a public nuisance failed in the council.

The next week, a restraining order was granted against Poulous, and he was arrested for public nuisance. The county prosecutor brought Poulous to municipal court. Poulous had his own attorney. The News Herald editorialized about the heroic Spartan who would not be bullied and misidentified said Spartan as Herodotus. Poulous said if he had to stop the music, then all the other graphophones and pianos on Main Street need to do the same or else it was selective prosecution, or "persecution" in his words.

The story made the front page on April 21. Defense attorney Frank Lee "dwelt touchingly upon the efforts of the Greek shine artist to 'make a home in a strange land.' From the fervor of the attorney's pleadings, one might have mistaken the case for a murder trial." Justice M.R. Davidson ruled first for a continuance. But Poulous insisted on a hearing at once. So a jury was summoned at 4:30 p.m., and the case "raged" until 7:30 p.m. Jurors found Poulous guilty of maintaining a public nuisance. Davidson fined him $1. Poulous was undeterred and appealed to circuit court.

Awaiting appeal, Poulous returned to his shop the next day and calmly played "Casey Jones" along with choice Greek anthems. The next day found a rival graphophone across the street pointed at Poulous' shop playing "Casey Jones" at the same volume.

Apparently, the appeal in circuit court never took place. Calmer heads must have arranged a compromise, and the rivalry disappeared from the newspapers. However, the next year, a little news brief noted the Milligan graphophone ordinance was passed in August 1912. It was a "misdemeanor for persons operating a graphophone so as to throw the noise into the street. The machine must be placed so that the 'noise' will be directed toward the interior of the building."

One man's music may be another man's noise, but the neighbors discovered the spirit of Thermopylae still lived in the breast of Spartan Will Poulous.