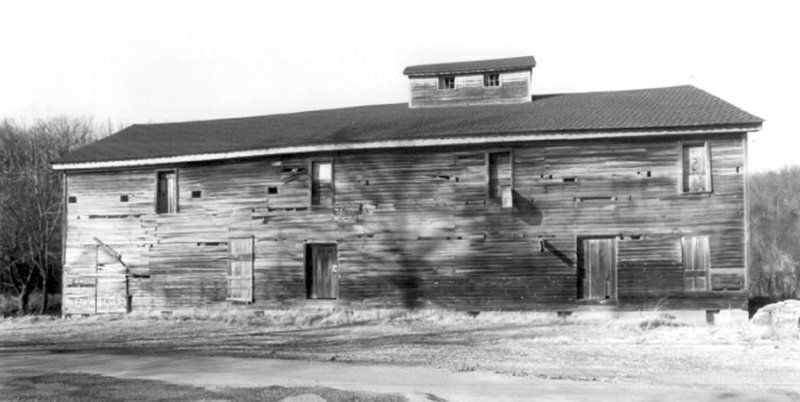 The Jolly Mill on Capps Creek in Newton County as seen in 1982. Despite its weather beaten look, the interior oaken timbers supporting the structure were solid though already 134 years old at the time. The 170-year-old mill has been the focus of restoration efforts by local volunteers since 1973.COURTESY | NATIONAL PARK SERVICE 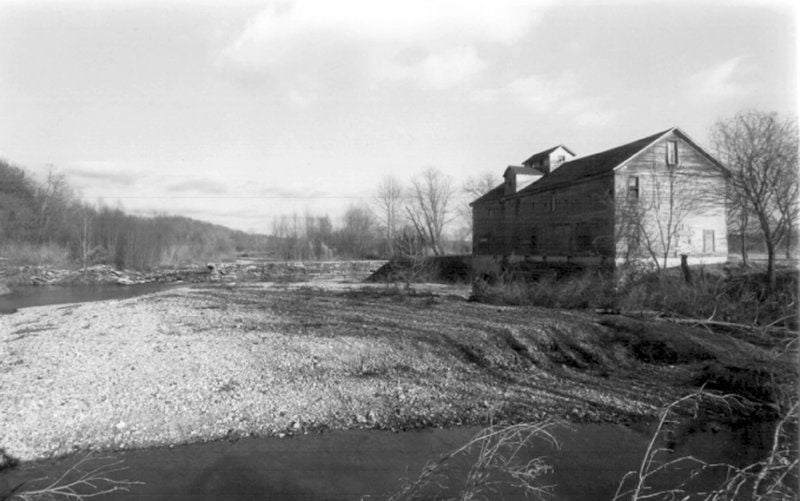 A flash flood on Capps Creek in 1978 had damaged the Jolly Mill pond dam and emptied the pond. This was the scene when application was made to place Jolly Mill on the National Register of Historic Places in 1982. Credit | National Park Service 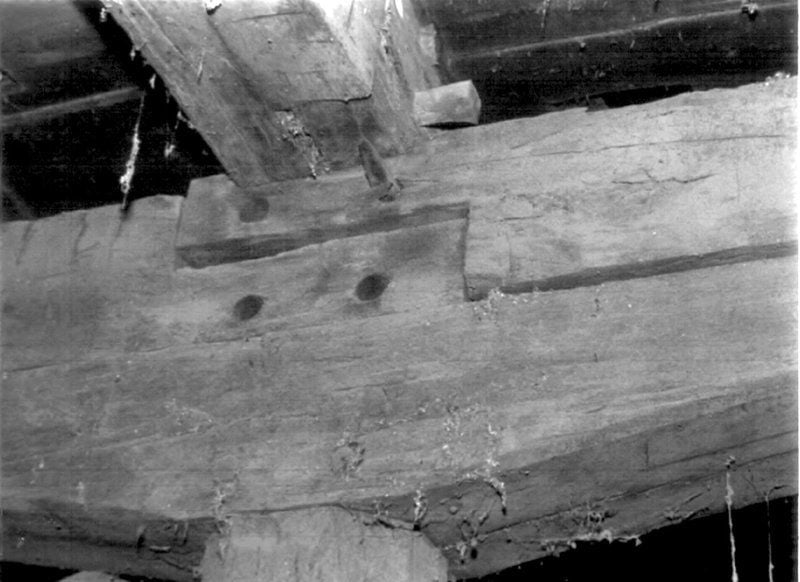 Built by slaves in 1848, the huge, hand-hewn timbers mortised and pegged are solid supports for the three-story mill. The 170-year-old mill has been the focus of local volunteers' restoration efforts for over 40 years.Credit | National Park Service

The Jolly Mill on Capps Creek in Newton County as seen in 1982. Despite its weather beaten look, the interior oaken timbers supporting the structure were solid though already 134 years old at the time. The 170-year-old mill has been the focus of restoration efforts by local volunteers since 1973.COURTESY | NATIONAL PARK SERVICE

A flash flood on Capps Creek in 1978 had damaged the Jolly Mill pond dam and emptied the pond. This was the scene when application was made to place Jolly Mill on the National Register of Historic Places in 1982. Credit | National Park Service

Built by slaves in 1848, the huge, hand-hewn timbers mortised and pegged are solid supports for the three-story mill. The 170-year-old mill has been the focus of local volunteers' restoration efforts for over 40 years.Credit | National Park Service

What is your first thought when someone mentions the frontier? Often our thoughts are colored by television and movies with images of a town on the wind-swept plains. Yet Southwest Missouri was the frontier in the 1830s and 1840s.

The land along Capps Creek in Newton County had attracted Native American hunting parties and early settlers with its numerous springs. An early grist mill was built farther up the creek around 1845 by Frederick Hisaw, who was a distiller of spirits. John Isbell and his father, Thomas, purchased the land from Hisaw and built a new mill downstream at the present site in 1848 for use as a distillery.

Why a distillery? At that time, transport of bulky crops as grain was slow and costly. Turning grain into liquor created a valuable, easily transported commodity. Grinding grain for flour offered an additional service to farmers and for sales.

The mill was a large project. John Isbell hired slave labor from neighbors and three slaves his father owned for the work. It was a substantial structure, 30 feet by 80 feet on top of an original foundation made of hand-chiseled limestone slab laid without mortar along the side of Capps Creek. The pit-sawn timbers were solid oak mortised together with pegs. Originally a wooden dam directed water to the foundation of the mill to operate an undershot water wheel, which powered the mill. The location became known as Isbell's Distillery.

Since grinding grain is a time-consuming process, the distillery became a gathering place for locals and travelers. A village known as Jollification grew up around the mill. Wagon trains on route to Kansas and Indian Territory used the road from Springfield through Neosho, which passed through the village. One man remembered the pre-Civil War town as having eight homes, a church, post office, three general stores, a drug store, a blacksmith shop, a saloon and the mill.

But the Civil War would change all that. Troops from North and South made life chaotic for all of Southwest Missourians. In 1862, the village was raided by bushwhackers and the village was burned except for the mill. John Isbell had mortgaged the mill to George Isbell just prior to the war and could not repay it. George foreclosed in 1865, and reopened the mill and distillery. He did not operate it himself, but leased it to managers, among them John Isbell, over the next 30 years.

In the aftermath of the war, Jollification grew back but not as large as before. Wagon trains still passed through town on the way west as did a new stage-coach service. But the new railroad from Springfield to Vinita in Indian Territory went through Pierce City, not Jollification. Bypassed, the town began to dwindle though the mill kept operating. Around 1875 a shortened version of the name, "Jolly," began to come into use.

Isbell's managers focused more on the milling operation rather than distillery and after 1875 ceased distilling. He continued to improve the operation with a reinforced dam made of sandstone blocks and enlarged mill pond. He sold the operation to his nephew in 1894 and the legal record listed it as "the Jolly Mill Place."

The nephew quickly resold it to new owners. More improvements were made by the new owners a couple years later with an even larger mill pond and installation of a turbine wheel and more milling equipment. In 1912, a second turbine wheel was added under the newest owner, W.F. Haskins. He later replaced the original turbine with a larger one in 1925. Haskins and his family would be the last owners of the working mill. It worked at capacity all through World War I, but business slowly declined in the succeeding years. The Haskins family operated the mill for 61 years until they closed it in 1973.

In May 1973, area residents formed a preservation society in hopes of preserving the mill when it was learned the property was going to be up for sale. In October, the property was sold to Ben Taylor who had been raised in the Monett-Pierce City area. An industrialist who manufactured life jackets, Taylor wanted to restore the mill building. In a 1974 interview with Globe reporter Mike Surbrugg, Taylor detailed his work and plans. By that time he already had the mill leveled after a new foundation was poured on the old one. One corner had been 18 inches lower. The roof was next in his plan. He noted the main gears and turbine were still present and operable.

A flash flood in 1978 interrupted plans and damaged the dam and pond. Over the next four years, various people wanted to take up the restoration. The Jolly Mill Park Foundation was organized in 1983. It purchased the mill and 28 acres from the Taylors.

Since 1984 the foundation has set about improving the site, repairing the dam, re-installing the grist milling equipment, building sidewalks and bridges. The county donated a one-lane bridge, which was being replaced, to the park and it was moved to the property. The Missouri National Guard, 203rd Engineer Battalion, Company C, rerouted 2,000 feet of roadway to the property and laid the foundations for the donated bridge with the county's approval. It also assisted in repair of the dam and constructing restrooms.

Jolly Mill Park is now open daily. Additional buildings have been added. It's home to the annual Jolly Mill Challenge, a 5K race, in April. Weddings and musical festivals are held on site. Milling demonstrations are conducted the first Saturday of the month. Plans are in the works for the steam-powered sawmill to be restored as well. All in all, not too bad for a 170-year-old.

Jolly Mill Park's address is 11262 Jolly Mill Lane, Pierce City, MO 65723. The park can be accessed from U.S. Highway 60 to the south on Wallaby Road, which is about 71/2 miles west of Monett. It is open from sunrise to sunset.

Milling demonstrations are still put on at 1 p.m. on the first Saturday of the month from May to October.

A $5 per car donation can be left at the donation box named the Iron Ranger.

Barbara Capps, age 91, Springfield, passed away at 5:15 p.m. Tuesday, October 20, 2020, at The Arbors at Lakewood, Springfield, after an illness. Barbara was born June 13, 1929, in Joplin to the late Paul R. Hamilton and Beryl Kelley Buckner and had lived in Joplin most of her life. Barbara …