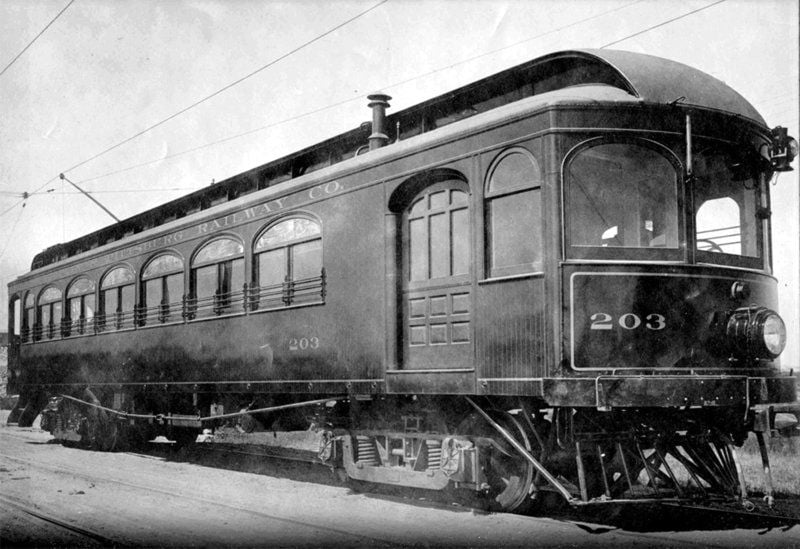 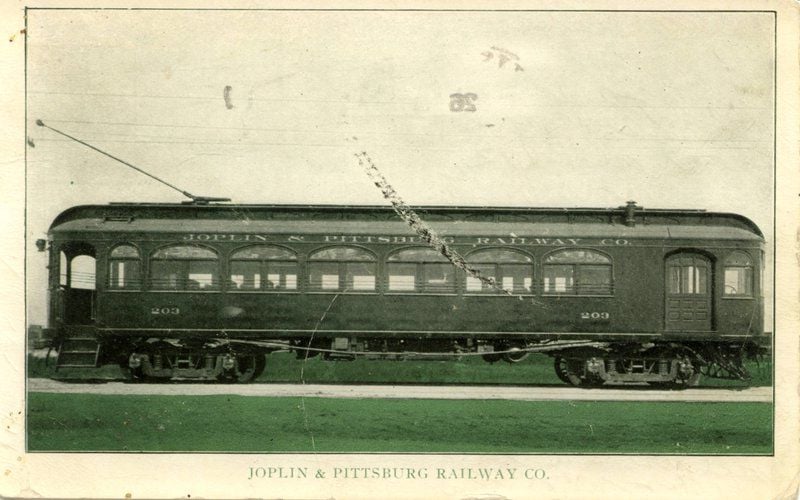 Joplin & Pittsburg Railway car No. 203, circa 1909, is shown on this postcard. Such cars could carry 40 passengers, though more packed the cars on trips to local parks. Courtesy | Joplin Public Library, Historical Postcard Collection 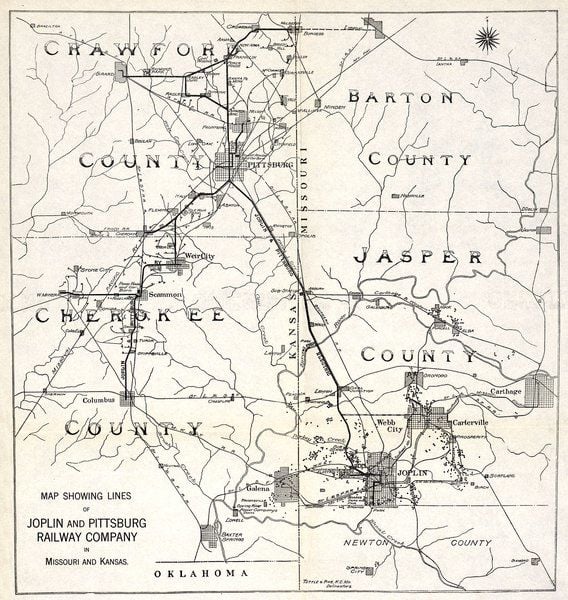 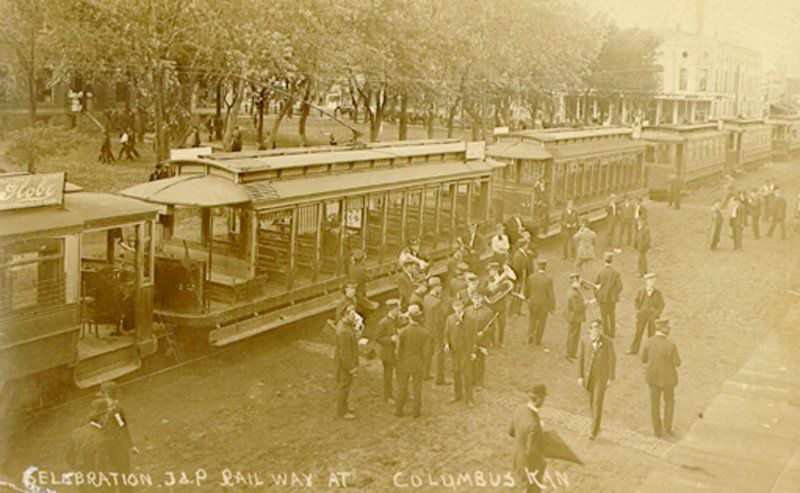 Joplin & Pittsburg Railway car No. 203, circa 1909, is shown on this postcard. Such cars could carry 40 passengers, though more packed the cars on trips to local parks. Courtesy | Joplin Public Library, Historical Postcard Collection

Interurban railways are a perennial interest in local history, usually focused on the Southwest Missouri Railroad. But its main rival and western counterpart was the Joplin & Pittsburg Railway, based in Pittsburg, Kansas. It grew crisscrossing the coal fields of Southeast Kansas.

The J&P line was an outgrowth of several earlier street railways in Girard, Frontenac and Pittsburg. The earliest railway was Pittsburg Railway Co. Its franchise was granted in 1890 for two miles of track north and south along Broadway. B.F. Hobart, president of the line, built more track than required and included an extension to smelters to engage their employees. Unlike the Southwest Missouri Railroad, it did not generate its own power, but purchased electricity from the Pittsburg Gas, Light and Coke Co. It was later sold to the Pittsburg, Frontenac and Suburban line.

The city granted a second franchise to the Forest Park Electric Railway in 1891. Its line went east and west along Fourth Street to Cow Creek bridge. It sponsored a band to entertain its clients at Forest Park at Fourth and Chestnut. It survived for three years and was sold at auction in 1894. The syndicate purchasing it later sold it to the Pittsburg, Frontenac and Suburban line.

The PF&S came to Pittsburg in 1894 with a 35-year franchise. W.C. Simons purchased the Forest Park line in 1895. He proposed branching into the electric power business to sell electricity to Pittsburg residents. Upon satisfying contract goals, the PF&S sold power for commercial lighting and for his streetcars.

It was in 1905 that Fred H. Fitch, who had been superintendent of the Southwest Missouri Railroad from 1896 to 1898, purchased the line. He expanded the line to Scammon, Weir and Columbus. Fitch had a contentious battle for several months with Frank Moore, who wanted to establish a rival Mineral Cities line over gaining a franchise into Columbus. Moore held a franchise but had continual financial problems, which finally killed his project. By October 1906, the towns of Frontenac, Kirkwood, Chicopee, Fleming, Schwab, Daisy Hill, Weir City, Scammon, Stippville, Turck, Mineral and Columbus were all connected by Fitch's line.

The line caught the eye of J.J. Heim, of Kansas City. Heim's family had been involved with breweries, streetcars and amusement parks in Kansas City. In July 1907, Heim and Fitch confirmed a deal moving the company's headquarters to Kansas City with various corporate officers from Southeast Kansas and Southwest Missouri.

Plans were announced to construct lines into Joplin via Carl Junction and Chitwood, south to Neosho and west from Joplin to Columbus. Overall, an estimated 150 miles of track were called for. The Panic of 1907 slowed the expansion, though the line to Joplin was completed in 1908. It was named the "air line" because of its direct route and the speed of its cars. The air line cars were large and could attain speeds of 60 mph. When the line began operation on Oct. 1, 1908, residents from towns along the line took to the rails to visit Joplin. As the Globe described it, perhaps tongue in cheek, "at Asbury, it was said at 4 o'clock yesterday afternoon that the postmaster and station agent were the only residents left in town."

Meanwhile, the Girard Coal Belt Electric Railway from Girard to Franklin and Arma was organized and built by Girard owners in 1907. It was purchased in 1909, adding a western leg to the J&P. The Heim line leased Schifferdecker Park in 1909, creating the Electric Park in an attempt to duplicate the success of its Kansas City amusement parks. It closed in 1912 after operating just three years.

Interurbans had to comply with state regulations. In 1912, the Morning Tribune reported that the Cherokee County attorney put the J&P on notice that it must comply with state law and equip all interurban cars with toilets and proper heating. Apparently, Galena riders had been suffering in silence, not knowing the law also applied to the Southwest Missouri Railroad operating in Southeast Kansas.

While the interurban was the pride of Pittsburg, it suffered labor troubles from 1911 to 1919. Six strikes took place over the eight years, quite different than the Southwest Missouri Railroad's labor relations. Perhaps a sign of the difference was seen in the J&P's sponsoring special cars from area towns to a Eugene Debs campaign rally in Lincoln Park in September 1912. Debs was the Socialist candidate for president. The organized labor movement was much more active in Southeast Kansas than across the state line.

Through the years, proposals to expand or connect the line with Fort Scott, Parsons and eventually Kansas City were floated, raising the hopes of businessmen. Yet those never materialized. Automobiles, jitney operators and good roads cut into the streetcar traffic. In 1922, a bond election for a possible extension from Columbus to Picher, Oklahoma, was held. But the Northeastern Oklahoma Electric Co. preemptively and loudly began construction of a 10-mile Picher-Columbus line the day before the election. Despite the noise, the bond issue passed, but the J&P never constructed the line. Instead, the Northeastern Oklahoma line connected the two towns.

Regulation-forced rate cuts, jitney competition, lawsuits and labor issues after 1920 cut the line's profits. It entered receivership in 1924. Special weekend fares, more air line cars to Joplin and freight connections to steam railroads all were attempts to revive the line. But by the late 1920s, it was still deeply indebted. The last blow was losing its Joplin connection in 1929. On May 14, 1929, the company was sold at auction. Pittsburg businessmen bought the line to save it from being junked. The reorganized J&P Railroad limped along with some city passenger and local freight traffic until it was sold in 1954.

Bill Caldwell is the librarian at The Joplin Globe. If you have a question you’d like him to research, send an email to wcaldwell@joplinglobe.com or leave a message at 417-627-7261.