The Jefferson Highway Association printed tourist brochures and maps with their slogan, "From Pine to Palm," on the cover. Credit | Cameronhistory.com 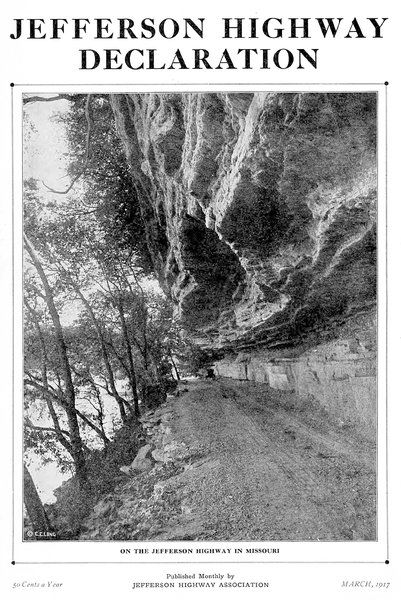 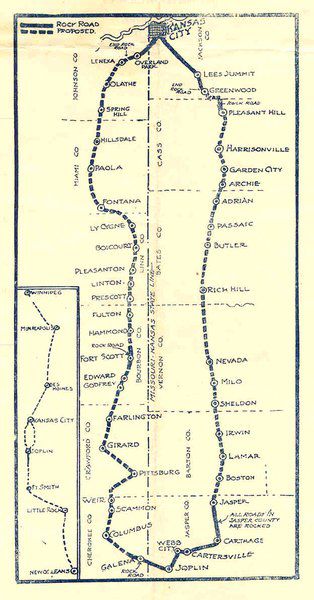 The Jefferson Highway Association printed tourist brochures and maps with their slogan, "From Pine to Palm," on the cover. Credit | Cameronhistory.com

With recent news of contracts to be let to complete the Missouri portion of the Bella Vista Bypass for Interstate 49, the dream of the Jefferson Highway, a national highway traversing the middle of the continent from Winnipeg, Manitoba, to New Orleans is that much closer to completion.

An early Interstate Trail Association, which encouraged road connections between Des Moines, Iowa, and Kansas City, Missouri, was the foundation for the later, larger association. It formed in 1911. By 1915, the association had expanded its reach to include St. Paul, Minnesota. All through the 1910s, good-roads associations were springing up across the country.

The country already had the Lincoln Highway, conceived in 1912 and dedicated in 1913, that stretched from New York City to San Francisco. It inspired the concept of a north-south highway, a 365-day road paved with gravel, rock, asphalt or concrete, through the central states. Its leading proponent was E.T. Meredith, an Iowa businessman, publisher and good-road booster. Meredith was the publisher of the magazine "Successful Farming," which had reached 100,000 farm subscribers by 1908. His vision for farmers and rural society depended on good roads.

Meredith worked with former Iowa Sen. Lafayette Young and Walter Parker, of the New Orleans Association of Commerce, to call for a convention in New Orleans on Nov. 15-16, 1915, to establish a Jefferson Highway Association. "Jefferson" was chosen as the name because the states involved were in the Louisiana Purchase. Fifty delegates were expected; 300 showed up.

"Never had New Orleans known the enthusiasm and pandemonium which reigned at the meeting," The Times-Picayune said.

Joplin's own John Malang was a pioneer road-builder in Missouri. He was always ready to champion the cause wherever necessary. He represented Joplin, often offering organizational suggestions the association adopted.

In the first issue of the Jefferson Highway Declaration, Meredith singled out Joplin, saying, "The city of Joplin, Missouri, has been noted for some years in its efforts at building rock roads in its own and adjoining counties. The city of Joplin has 120 miles of rock road running north and south at the present time. There had already been considerable agitation to get rock road connections from Joplin to Kansas City. The opportunity of making this a part of a great international (sic) highway immediately served to stimulate and organize this sentiment, on both the Missouri and Kansas sides of the line."

The struggle to gain a place on the highway took on life-or-death proportions for cities. Iowa had competing cities wanting on the highway.

The Kansas City-to-Joplin route was another bone of contention between the two states and towns on either side of the state line. Parallel routes passing through Joplin, which eventually became U.S. 71 and U.S. 69, competed for official recognition. At first, Meredith proposed for such competitors that the first route to complete a rock road would be the official route. However, after a second Kansas route west of the U.S. 69 corridor was proposed similar to Iowa's complicated situation, he suggested "branch highways" and "scenic loops" to accommodate the road enthusiasts.

In the next few years, Arkansas boosters felt left out, as the highway left Baxter Springs, Kansas, to head south solely through Oklahoma into Texas, then east to Shreveport. Arkansas proposed two branch routes — one on the west side of the state through Fayetteville, Fort Smith and Texarkana, and a second scenic loop through Eureka Springs, Little Rock and Pine Bluff to Monroe, Louisiana.

The first maps of the Kansas City-Joplin corridor showed a "rock road" that extended a few miles outside of Kansas City, but all of the route in Jasper County and west to Galena, Kansas, was already a "rock road." The rest of the connecting highway in either state was still "proposed."

A slogan, "From Pine to Palm," was adopted by the association for its promotional material and maps. Brochures had a pine tree and palm tree on the cover along with a picture of Jefferson and an automobile cruising down a scenic highway.

Decline of the association

After World War I, the states and federal government began spending money on road construction. Malang led the successful campaign in 1920 to "Get Missouri Out of the Mud" with $60 million in bonds for road building. Federal money supplemented state money.

Organizers still promoted the highway with stunts. In February 1926, a convoy of 32 cars and 132 people took a 13-day trip from Winnipeg to New Orleans. They wanted to prove the highway was complete and that it could be traversed in any weather.

The association had posted its own signage marking the highway. In 1927, the federal government's numbering system for highways sidelined the Jefferson and Lincoln highways. It actually banned posting distinctive signage on highways. The association's last map was published in 1929. With the Great Depression, finances dried up for such associations.

A namesake of the highway is the Jefferson Bus Line. The company was founded in 1919 in Minneapolis and just celebrated its 100th anniversary.

In 2011, the association was revived to preserve the history of the highway. Annual conventions are held in cities on the route; Carthage hosted the 2016 conference. A sign marking the Jefferson Highway is located in Webb City at the junction of East Broadway and North Webb Street.

Malang, Joplin and Jasper County were linchpins in the construction and promotion of the Jefferson Highway, the forerunner to Interstate 49.