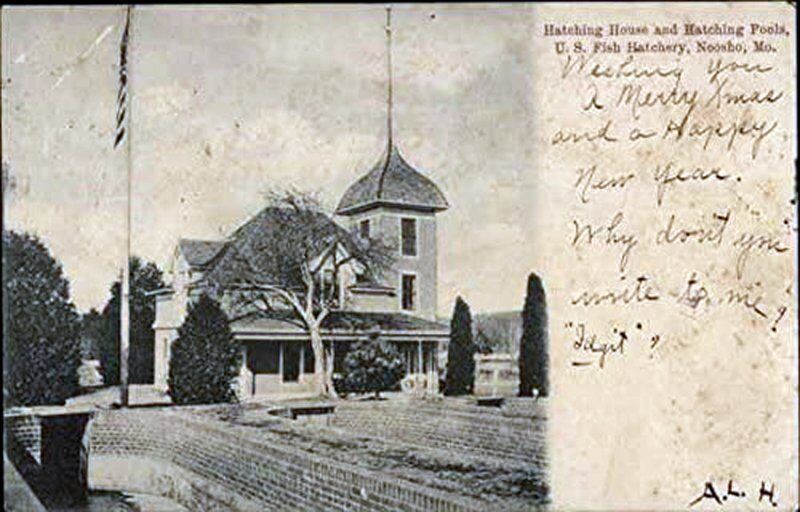 This postcard from 1906 shows the hatching house and ponds at the U.S. Fish Hatchery in Neosho. Credit | Amazon 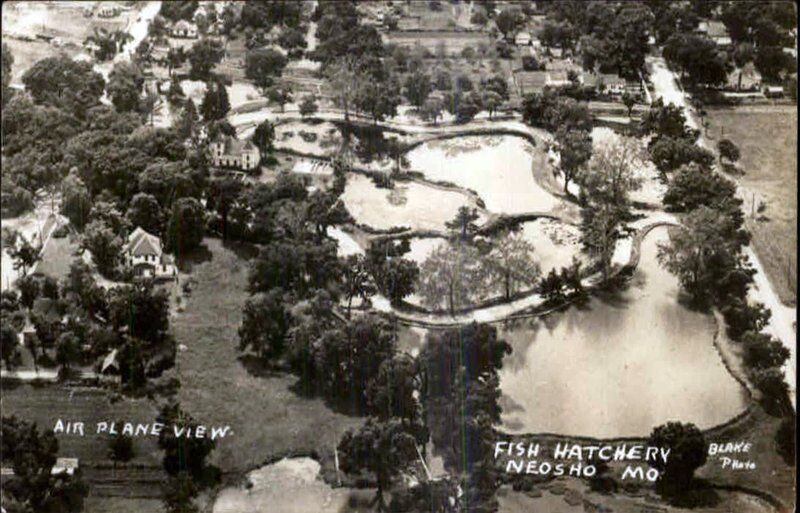 This undated postcard shows an aerial view of the U.S. Fish Hatchery in Neosho with the ponds and hatching house on the left. The west side of the hatchery bordered the Kansas City Southern Railroad mainline. Fish could be easily shipped out on a specially made fish car. Credit | eBay 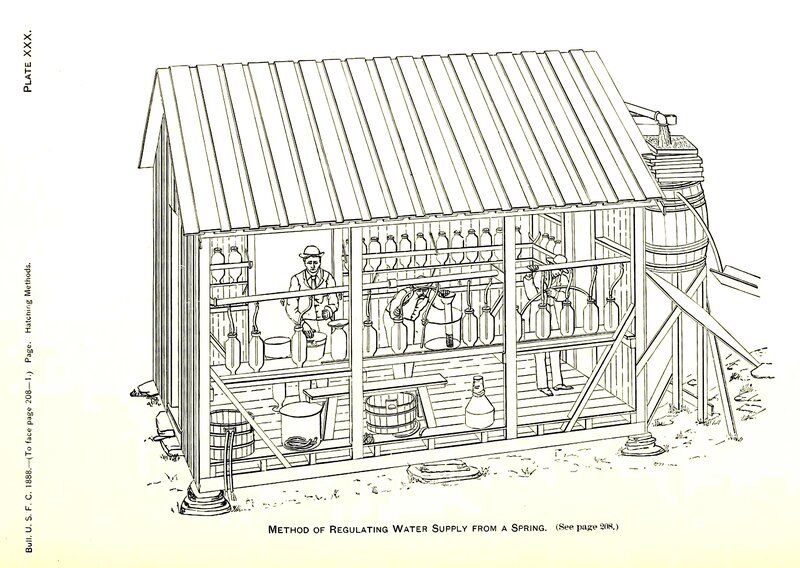 The U.S. Fish Commission's Bulletin in 1888 gave instruction on the use of McDonald automatic hatching jars for fish eggs. The illustration shows workers in a building piped with spring water filling the jars. The Neosho hatchery had a steady supply of spring water from the Hearrell spring, which supplied 300 gallons of water per minute. Courtesy | Bulletin of the U.S. Fish Commission 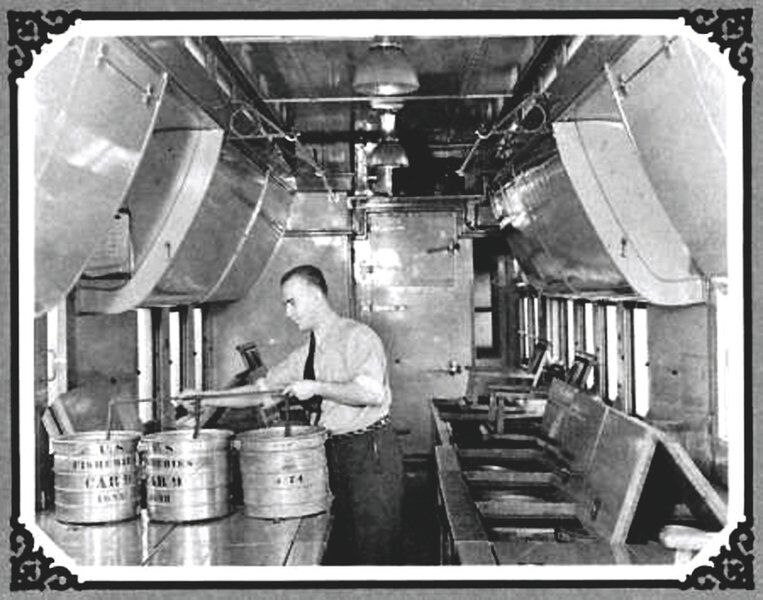 The U.S. Fish Commission developed a fleet of fish cars used to transport eggs, fry and fingerlings from hatcheries to applicants who stocked rivers, ponds and lakes. The first was built in 1881 and the last constructed in 1929, with each succeeding car being modified and improved over the last. Here is the interior of one car from the 1920s with an attendant aerating the water in cans holding fish. Courtesy | Catskillarchive.com 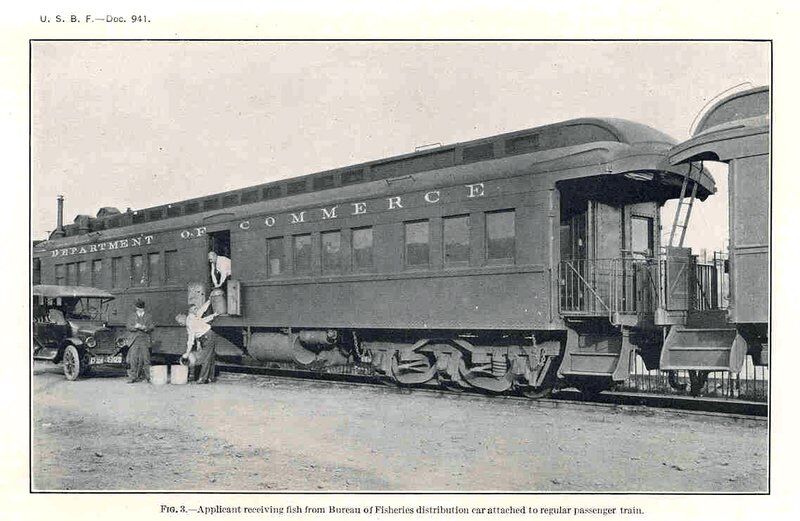 In 1881 the U.S. Fish Commission converted a baggage car into a fish car for transporting fish from hatcheries to their destinations. By 1894, the commission had four dedicated cars able to carry 150 10-gallon cans. Each can could hold up to 15,000 3-inch fish. The cars, attached to regular passenger trains, had a five-man crew. This photo published in 1923 shows cans of fingerlings being unloaded for an applicant. Courtesy | U.S. Bureau of Fisheries 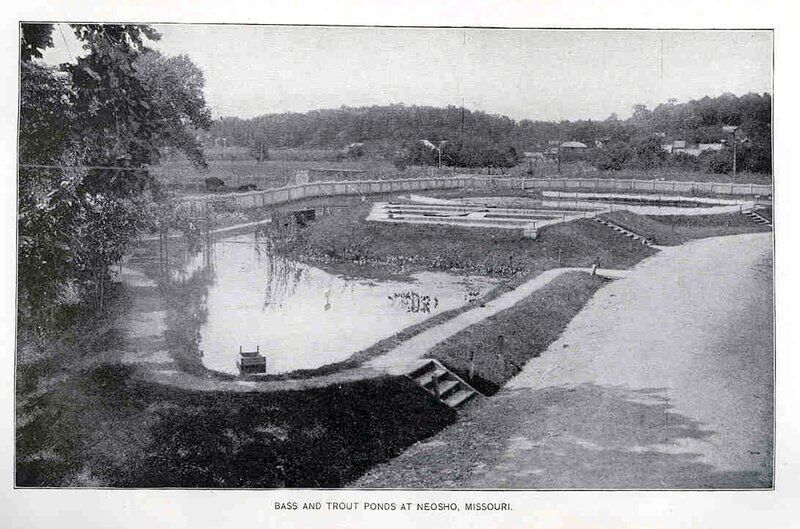 The U.S. Fish Hatchery in Neosho raised bass and trout in the 1890s. This photo shows the ponds used to raise bass and trout. Courtesy | U.S. Commission on Fish and Fisheries 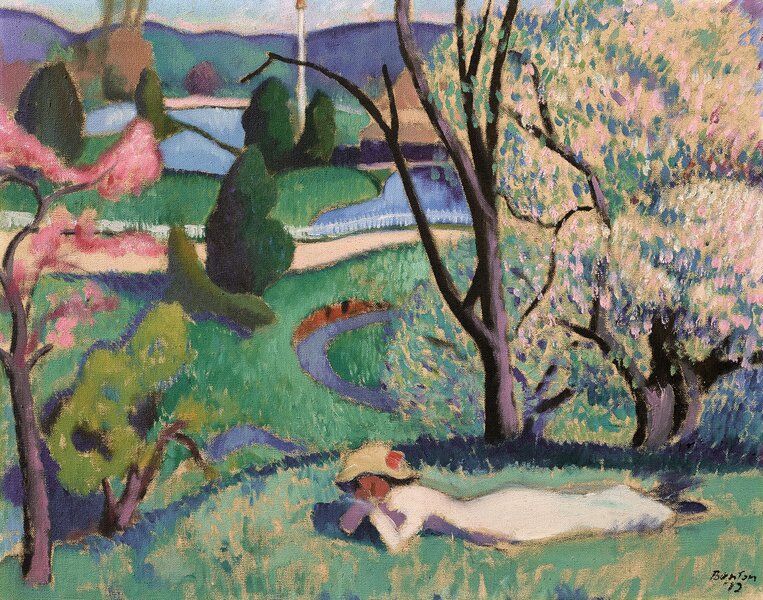 This postcard from 1906 shows the hatching house and ponds at the U.S. Fish Hatchery in Neosho. Credit | Amazon

This undated postcard shows an aerial view of the U.S. Fish Hatchery in Neosho with the ponds and hatching house on the left. The west side of the hatchery bordered the Kansas City Southern Railroad mainline. Fish could be easily shipped out on a specially made fish car. Credit | eBay

The U.S. Fish Commission's Bulletin in 1888 gave instruction on the use of McDonald automatic hatching jars for fish eggs. The illustration shows workers in a building piped with spring water filling the jars. The Neosho hatchery had a steady supply of spring water from the Hearrell spring, which supplied 300 gallons of water per minute. Courtesy | Bulletin of the U.S. Fish Commission

Nestled on the east side of Neosho is the Neosho National Fish Hatchery. At 132, it is the oldest operating federal fish hatchery in the nation. It has been a source of pride for the city and a well-attended tourist attraction.

In its early years, it specialized in hatching and raising game fish.

After the Civil War, when peacetime cares resumed, attention focused on declining stocks of commercial fish. Overfishing and practices that damaged habitat were not regulated. For example, as late as the 1910s, the Globe and News Herald carried accounts of "dynamite parties" where fishermen used dynamite to stun fish in area waterways. It was under President U.S. Grant that the U.S. Fish Commission was established in 1871. The Baird hatchery on the McCloud River in California was the first in 1872, raising salmon and rainbow trout.

Over the next 20 years, the commission experimented with methods of transporting fish. Baird Superintendent Dr. Livingston Stone transported fish to nearby West Coast destinations in open milk cans, with the water changed every two hours. The first successful cross-country trip was a shipment of striped bass from New Jersey to California in 1879. The cans were cooled by ice, and passengers were hired to aerate the water by hand.

With that success and the demand for fish increasing, the commission in 1881 purchased a railroad baggage car that was specifically equipped to haul fish. A new method to aerate the cans had been developed in the meantime that made regular shipments possible instead of a curiosity.

Location of hatcheries at first depended upon streams with stocks of wild fish that could be harvested for eggs. But as transport became possible, the commission looked for locations with the best connections.

An article in the commission's Annual Bulletin of 1886 discussed the potential of stocking trout in Ozark streams, particularly Spring River near Verona. "It is a wonder that nature has neglected so inviting a field, yet we are informed by the state commissioners that no native species of trout is found in any of the streams that rise in the Ozark range. ... Be this as it may, it has devolved upon the commission to utilize nature's neglected opportunities."

In 1888, Neosho provided very desirable qualities. It was known in the early 1880s as the home of Hermann Jaeger, who shipped out boxcars of rootstock from his vineyards to France to replace those destroyed by phylloxera. At the junction of the Atlantic and Pacific (later Frisco) in 1870 and then the Kansas City Southern's forerunner in 1887, the city was ideally located.

As the "City of Springs," there was no shortage of fresh, cold water necessary to maintain a hatchery for game fish, especially rainbow trout. The commission found the property of Lemuel and Mary Hearrell ideal. It lay outside of the city but was adjacent to the Kansas City Southern mainline. It had a spring that supplied 300 gallons of water a minute.

Twelve acres were purchased for the hatchery for $2,472. And for $1 it obtained the Hearrell spring. By 1889, ponds were excavated and the hatchery was in operation. Rainbow trout from the Baird hatchery were soon acquired.

Within four years, William Page, superintendent of the hatchery, was writing for the Annual Bulletin. Before coming to Neosho, Page had been a Bulletin contributor in 1888, writing on best practices for hatching fish eggs. He wrote "The Propagation of Black Bass in Ponds" for the 1893 Annual Bulletin.

In that second article, he recounted that black bass had been neglected by hatcheries because they focused on salmon and shad. Bass were valued by sport fishermen, who in recent years had begun lobbying the commission raise bass. He said studying "fishes of less value" would reveal the secret of raising bass. By learning from the fish commissioners in St. Louis, Wisconsin and San Marcos, Texas, Page launched his own experiments at the hatchery. After four years, he compiled his data, giving detailed account of the best methods Neosho had employed. Raising black bass in ponds was possible — to the delight of anglers.

By 1907, the McMahon spring became another source of water, increasing the flow to 1,000 gallons a minute. The hatchery raised black bass and rainbow trout, and over the years raised more than 130 different species of fish.

Fish supplied by the hatchery were free to applicants. A fish rail car could carry 150 10-gallon cans, each with 15,000 3-inch fish. The car had its own five-man crew to care for the fish. Loaded, it was coupled to a passenger train. The railroad charged a minimal fee for transport and often didn't charge the crew passage. Applicants were sent letters of scheduled arrival, then a telegram as the day neared. Fish could be unloaded at a depot or at a prearranged location. Fish were either transferred to the applicant's cans or the applicant took the cans, released the fish and then returned the cans to the railroad, which shipped them back free to the hatchery. Davis Lake north of Joplin was one such destination.

At its peak in 1930, the commission had a fleet of 10 fish cars. But by the 1930s, roads had improved enough that tank trucks could convey fish at much lower cost than rail. Trucks were limited to a 60-mile radius in 1930, but by 1939 that had improved to 300 miles. Cross-country shipments of fish became the exception, not the norm.

According to the Fish and Wildlife Service, by 1940 there were just three cars operating. One wrecked in 1944, the fate of the second is unknown, and the last, the newest one, was taken out of service in 1947.

Hatcheries now focused on their own regions or on specific species. Besides concentrating on rainbow trout and endangered species such as paddlefish, lake sturgeon, Topeka shiners, pallid sturgeon, native mussels and monitoring Ozark cavefish in the Hearrell spring, Neosho serves to provide environmental education with its aquarium and public outreach programs. The hatchery's rail connections had served it well, but as the times changed, so did it.