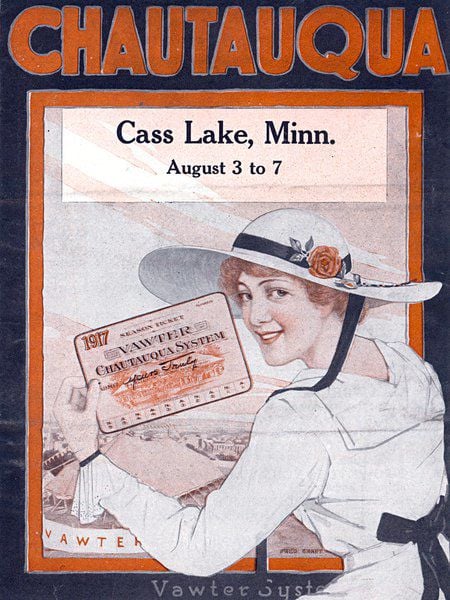 The cover of a chautauqua presented by the Vawter Chautauqua System in Cass Lake, Minnesota in 1917. There were several chautauqua circuits as the Redpath, Vawter, Western Welfare Association. At one time in the 1920s there were 21 separate circuits.Courtesy | Wikipedia 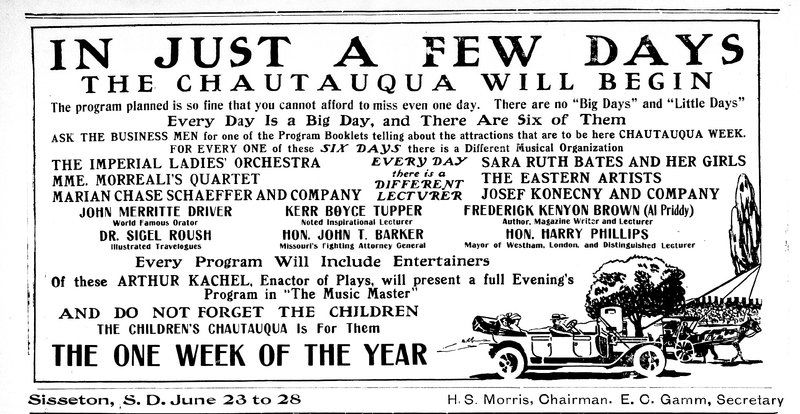 An advertisement for a Sisseton Chautauqua in the June 19, 1914 issue of the Sisseton Weekly Standard.Credit | South Dakota Public Broadcasting 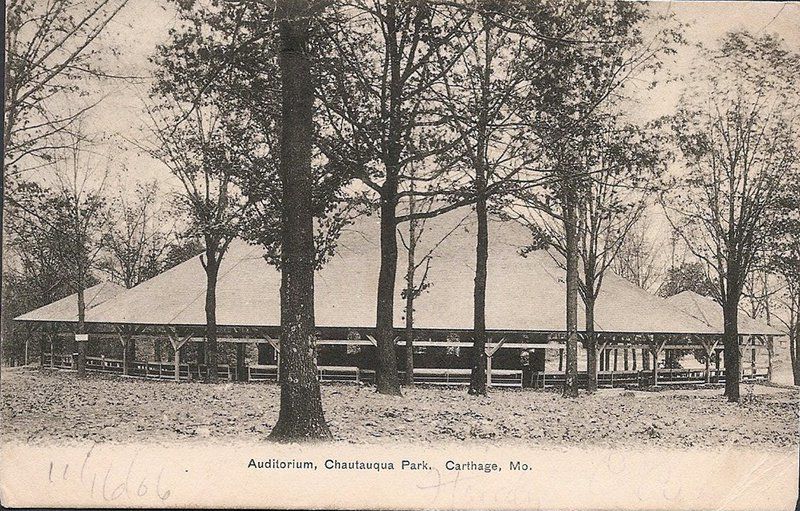 A 1906 postcard of the auditorium in Chautauqua Park in Carthage. Courtesy | eBay. 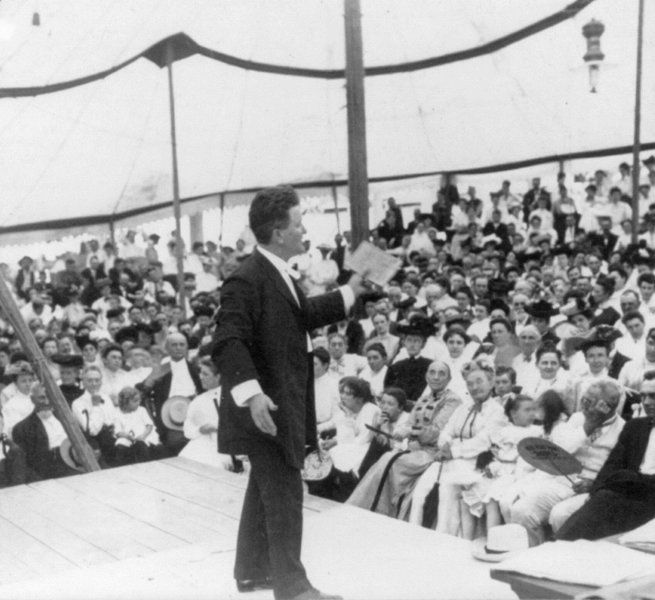 Robert M. LaFolllette speaks to an assembled crowd on the Chautaqua Circuit in Illinois in 1905. He was known for his oratory having served as Wisconsin's governor, U.S. representative and senator. He was a popular chautauqua lecturer.Courtesy | Library of Congress

The cover of a chautauqua presented by the Vawter Chautauqua System in Cass Lake, Minnesota in 1917. There were several chautauqua circuits as the Redpath, Vawter, Western Welfare Association. At one time in the 1920s there were 21 separate circuits.Courtesy | Wikipedia

An advertisement for a Sisseton Chautauqua in the June 19, 1914 issue of the Sisseton Weekly Standard.Credit | South Dakota Public Broadcasting

A 1906 postcard of the auditorium in Chautauqua Park in Carthage. Courtesy | eBay.

Robert M. LaFolllette speaks to an assembled crowd on the Chautaqua Circuit in Illinois in 1905. He was known for his oratory having served as Wisconsin's governor, U.S. representative and senator. He was a popular chautauqua lecturer.Courtesy | Library of Congress

For more than 50 years, a regular feature in towns across the country was a weeklong summer event called a chautauqua. Towns around the Tri-State District held chautauquas like clockwork in the first two decades of the 20th century.

The chautauqua movement began in 1874 when John Vincent and Lewis Miller started a tent meeting to train Sunday school teachers in upstate New York at Chautauqua Lake. Originally, it was to provide certificates for the Methodist Sunday school teachers. Over a short time, the outdoor setting became a popular destination, with the New York site growing into the Chautauqua Institution. It attracted families, not just individuals, for activities spread over several days, usually a week.

While the initial chautauqua was held at a fixed location, within a few years, “daughter” chautauquas sprang up around the country. Some were in direct communication with the institution, while others were set up by entrepreneurs and were completely independent. The independent chautauquas grew into a combination of education and entertainment troupes. Touring companies followed established routes the operators set up, generally a year in advance. It was a business dependent on good railroad connections and good weather, as tents were a preferred venue.

Each circuit had its favorite speakers, musicians and miscellaneous entertainers. The most famous chautauqua speaker was the founder of Temple University, Russell Conwell. Conwell is said to have given his “Acres of Diamonds” speech 6,150 times between 1882 and 1925. Much in the spirit of self-improvement found in chautauquas, Conwell emphasized that developing his talents and skills is what made a man successful — or diamonds could be found one’s own backyard. He and perennial presidential candidate William Jennings Bryan were two of the most sought-after speakers.

Those led to the first Inter State Chautauqua Assembly in 1897, organized as a Jasper-Cherokee county affair. Directors came from Galena, Kansas, and several Jasper County towns. It was held in Carthage from June 21 to July 9. As might be suspected, the star speaker was none other than William Jennings Bryan. Iowa Sen. Jonathan Dollivar, noted for his progressive views, and Gen. S.B. Prentis of Battle of Shiloh fame were also scheduled. The day Bryan spoke, it was estimated 20,000 people gathered to hear him. The assembly was a success, though a torrential thunderstorm held down attendance in the middle of the meetings, which cut into the profits. One report suggested that Bryan was promised half of the gate on the day he spoke, which was reported to amount to $4,000.

The success of that first assembly led organizers to set their sights high for future events. In January 1902, the Globe reported organizers had “one of their fondest hopes blasted” by receipt of a letter advising that Mark Twain would not be able to accept their invitation to speak at one of the programs. The letter, from “Riversdale on the Hudson” signed “S.L. Clemens,” was as follows: “I dearly wish I could come, but I am old and tired, and have contracted with myself to henceforth limit my journeys to the salt water and ships, they being restful friends of mine.”

Through the next 20 years, chautauquas could be found in just about every town in the district. Joplin was solicited by a promoter in 1912 for a 1913 assembly. The Morning Tribune reported that J.E. Dinger, representing the Wichita Film and Supply Co., made his presentation to the Commercial Club, saying its “programs consist of all that genius can devise and all that money can buy.” They offered musical ensembles, lecturers, novelties, cartoonists and magicians — “all the very best.” The company would provide a tent completely equipped for chautauqua purposes for a set of programs over seven days. All the club had to do was secure 700 season tickets, though tickets for individual programs and days were also available. The reporter editorialized at the end of the story: “Joplin should be on the chautauqua map — it can be made the chautauqua center for all nearby towns.”

Despite the camp-meeting environment of the chautauqua, one sign that the world was speeding up was that circuit troupes were scheduled to arrive by railroad on specific days. In several Globe stories in the mid-1910s, Galena promoters would reassure ticket-holders that the rail connections were secure and the planned entertainers would arrive on time at the appointed day. Summer flooding could wreck railroad beds and the schedules of the best-planned chautauqua circuit.

With the advent of radio, movies and automobiles, the lure of chautauquas slowly declined in the late 1920s. Tents and plank benches were no match for air-conditioned movie theaters. But it was the Great Depression that finally did in the circuits. So ended an era of 50 years where chautauquas provided summertime culture, entertainment and excitement for small towns across the country.